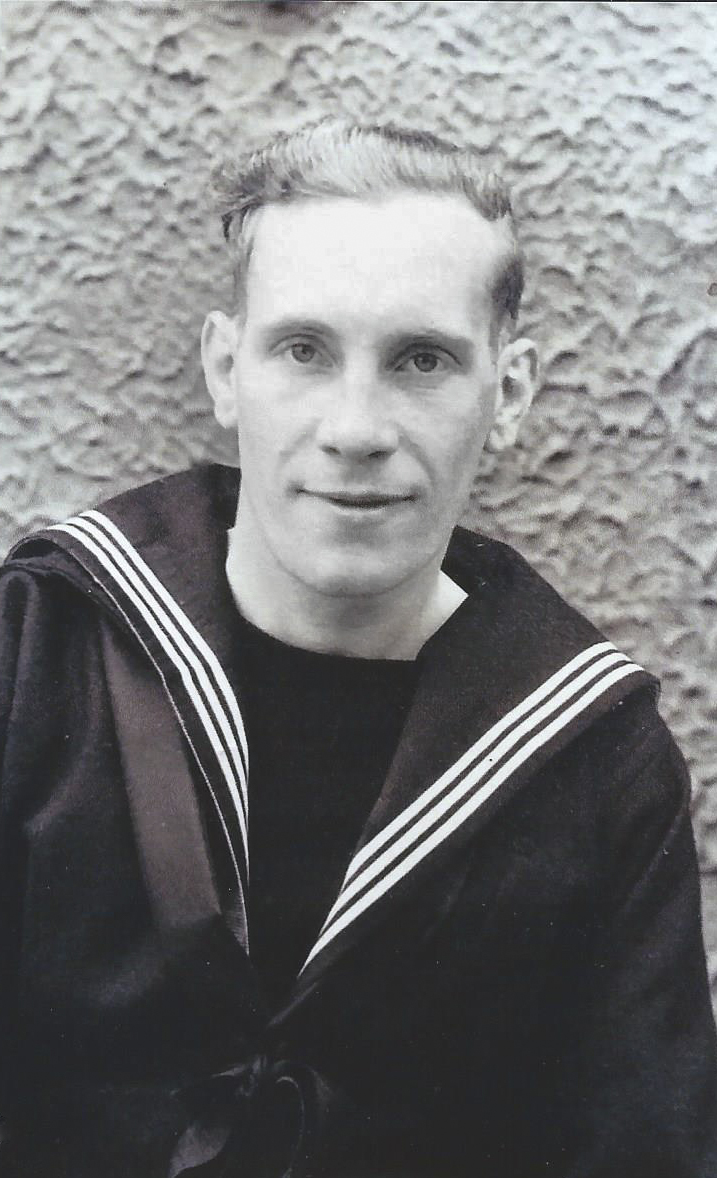 The story and photographs are shared by the Trust with kind permission from Philip Enticknap, husband of Valerie Enticknap. It describes the impact on the family on William's death and the efforts Valerie made to discover how her father died and the friendship she made as a result.

Val was born in Harrow, Middlesex on the 12th June 1942 to Lilly and William Wallace. According to William’s Certificate of Service he was born in Finsbury London on the 11th March 1911 and enlisted in the navy 12th May 1941 with the Royal Navy Patrol Service at Lowestoft. He died on the 18th August 1944.

She had in her possession a group photo taken with other men of the Patrol service in which William Wallace appeared. It is believed to have been taken on HMS Wildfire, a land based ship at Sheerness used for training purposes. 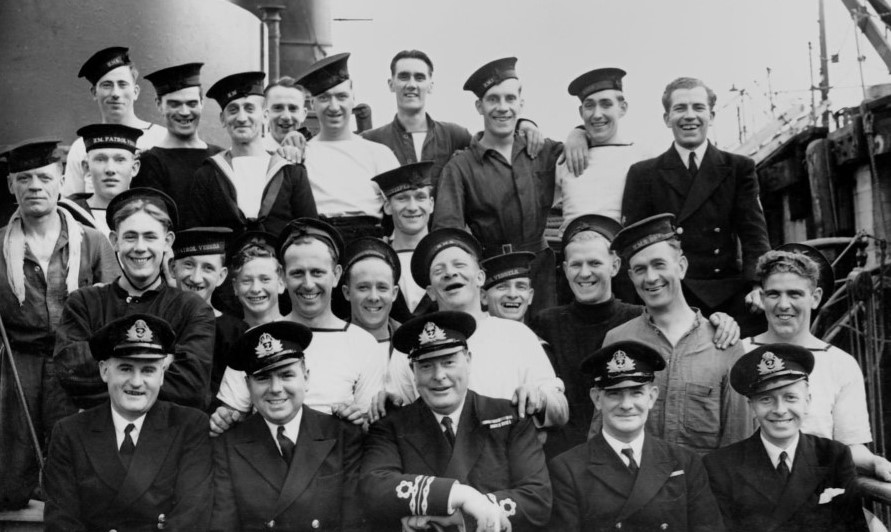 Prior to his death, Lilly & William with Val lived in a house in Belsize Road, Harrow Weald. When William’s sister, Rose, lost their home in London during the blitz Lilly & William took them into their house in Harrow. This became a family home and Val often reminisced about her happy days at Belsize where she spent her childhood. Rose and her husband, Bill, had two children, a daughter Beryl who was 3 years older than Val and later a son, Will (Bill Butcher). Val and her cousin, Beryl became very close, almost as sisters.

One of William's last letters home was written to his parents on 13th July 1944. He comments on his and other crewmates concerns about the bombing of London, a missed leave opportunity and cancellation of a trip ashore. He also talks about the bad weather and its impact on the invasion. And on a personal note wishes his uncle Charlie a good holiday. 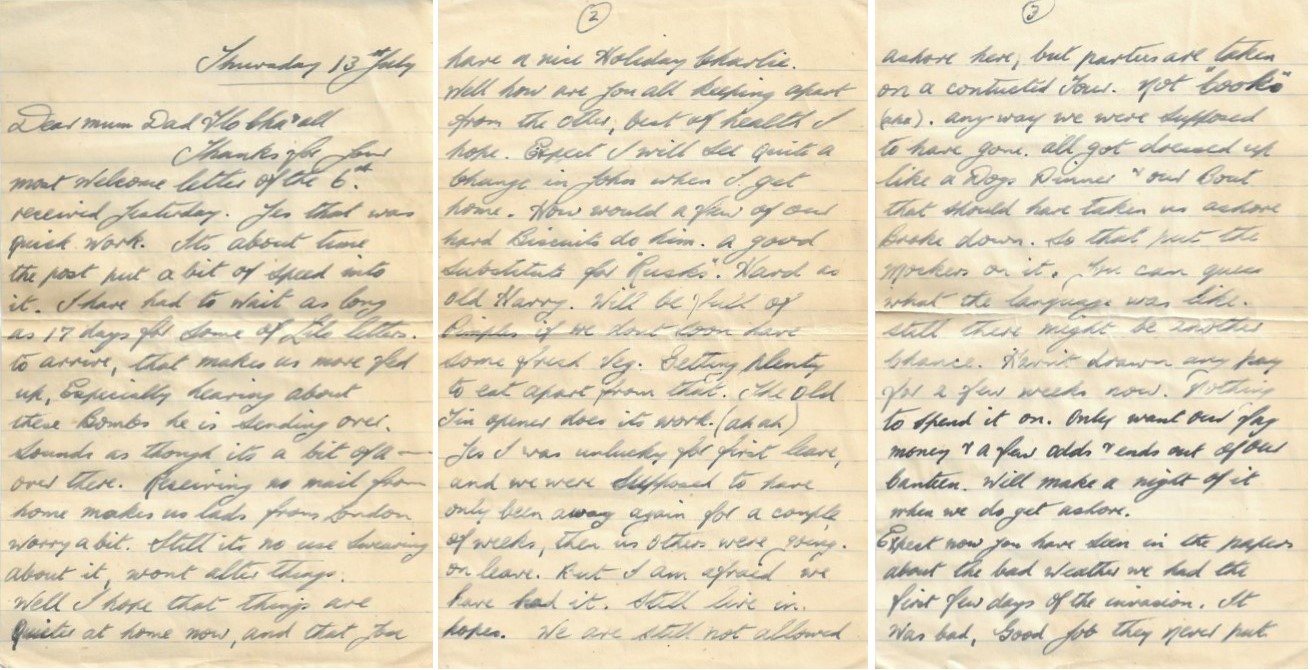 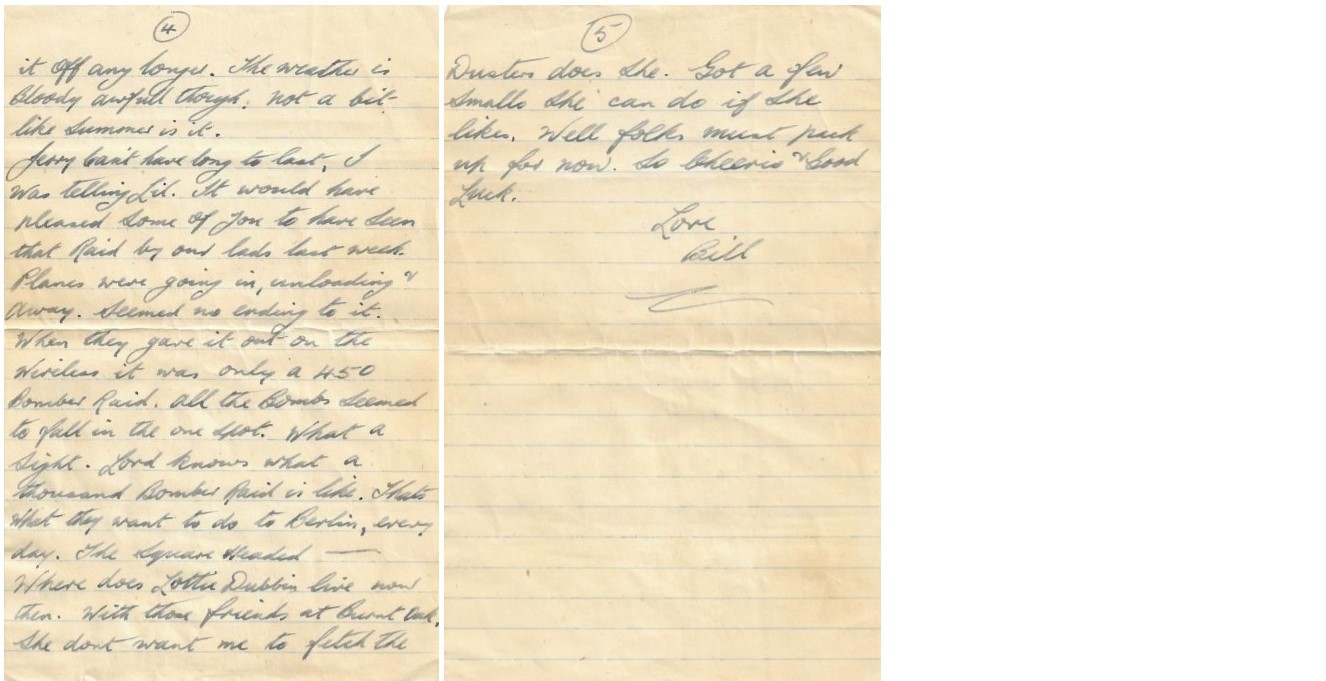 Just over  a month after this letter was sent, the family were in receipt of a GPO telegram informing them of William's death. Val talked about the impact this had on the family. 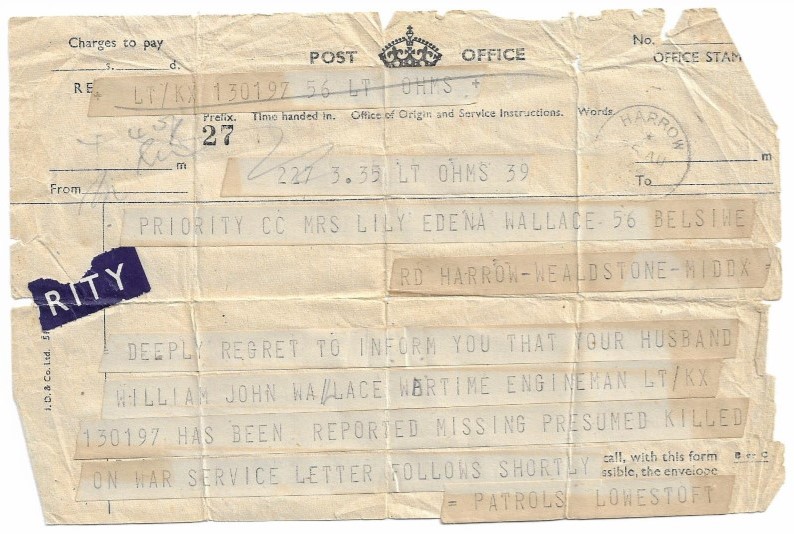 Val’s mother's sister recalls how she had just come home from the cinema after the telegram was delivered and found the small front room full of family members comforting each other.

After the loss of William, Lilly needed to work to support Val. She worked long shift hours at the Kodak photographic material production plant in Harrow which meant that she was not always there for Val. Her Aunt Rose looked after her and Val looked to her as her second Mother. Val remained very close and devoted to Rose who passed away in her nineties.

William Wallace had a close friend, Francis (Frank) Sullivan, who also served with him on HMS Fratton. Lilly wrote to the Royal Navy Patrol Service following the loss of William to enquire if Frank Sullivan had survived. Sadly she received a letter informing her that he was also lost with the Fratton. I noticed that the letter was sent to Lilly at an address in Silverdale, Lancashire. I’m afraid that I have no idea why she would be residing there but note that it was in the October of 1944 and that she may have gone there for respite.

Lilly had tried over the years to find out more about the sinking of HMS Fratton. She thought that the Captain was the only survivor and apparently did write to him but never received a reply. Sadly she passed away suddenly at an early age in 1980 not knowing the full story.

With the advent of the internet Val made numerous attempts to find any information, repeatably entering HMS Fratton into Google and other related data but with negative results. Like her Mother she had no information to go on. Together we visited the Royal Navy Patrol Service memorial and museum at Lowestoft but was unable to find anything relating to the Fratton. William Wallace is of course listed on the memorial at Lowestoft and, in fact, Val & her Mother attended the unveiling ceremony of the memorial on the 7th October 1953.

Just before Christmas 2003 Val made a another random internet search which returned the following result: "Please mention my ship HMS FRATTON on your new memorial ..Stan Ford." Stan was referring to a fund being set up for a new Naval Memorial on the coast of Normandy by a person by the name of Seaman Cotterell. Val managed to make contact with Mr Cotterell but he was unable to provide any contact details about Stan, other than he lived somewhere in Devon.

Determined to find him Val went onto the Electoral Roll and after several calls on Christmas Eve eventually located Stan. He was very surprised but keen to share what information he could and was delighted that Val had found him. Val and I visited him and his (now late) wife at their home in Bovey Tracy Devon early in 2004. Stan was very welcoming and calmly explained to us about what had happened regarding the sinking of the Fratton, how he survived and the life injuries that he sustained. Unfortunately, he did not know William or Frank as he was on the Deck.

Stan also told Val about the war graves cemetery at Ryes in France which she had no knowledge of. There are two named headstones at the cemetery to sailors from HMS Fratton - A S Nobel Sanderson and Seaman Frank Tucker. Sanderson was a very close friend of Stan. There is also a headstone to a sailor Known Unto God and Val adopted this grave because of its closeness to the Fratton graves. Val and I visited Ryes in the summer of 2004 and laid flowers on the graves. 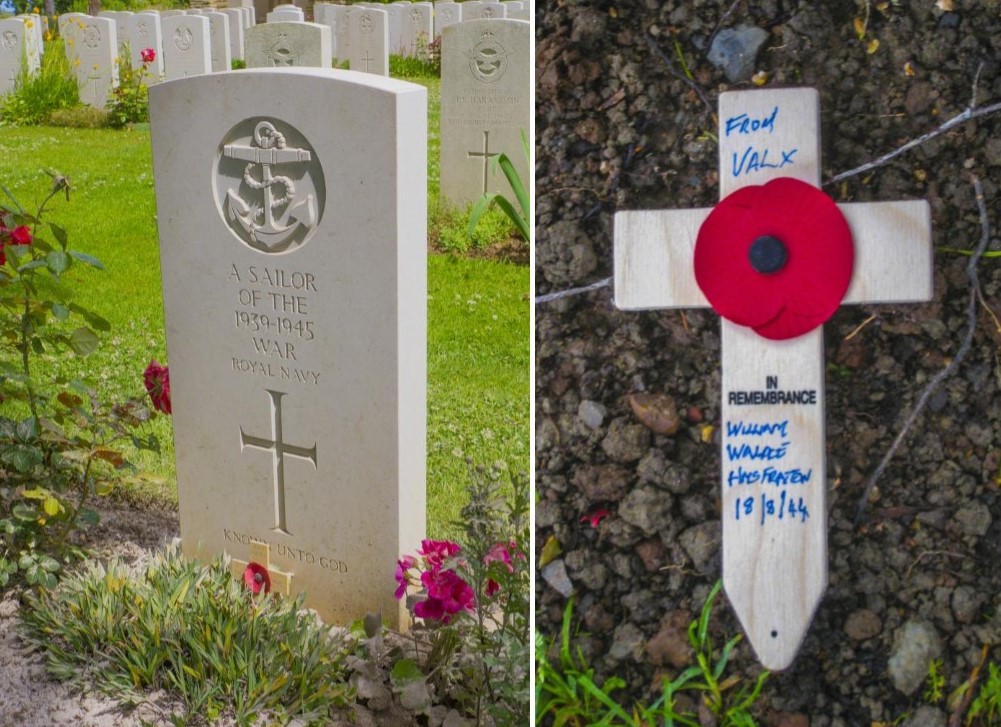 Left: Grave to the unknown sailor adopted by Val. Right: a cross she laid on it

It was very emotional and gave closure for Val for what happened to her Father. In 2010 we again visited Ryes with Stan and members of his family. 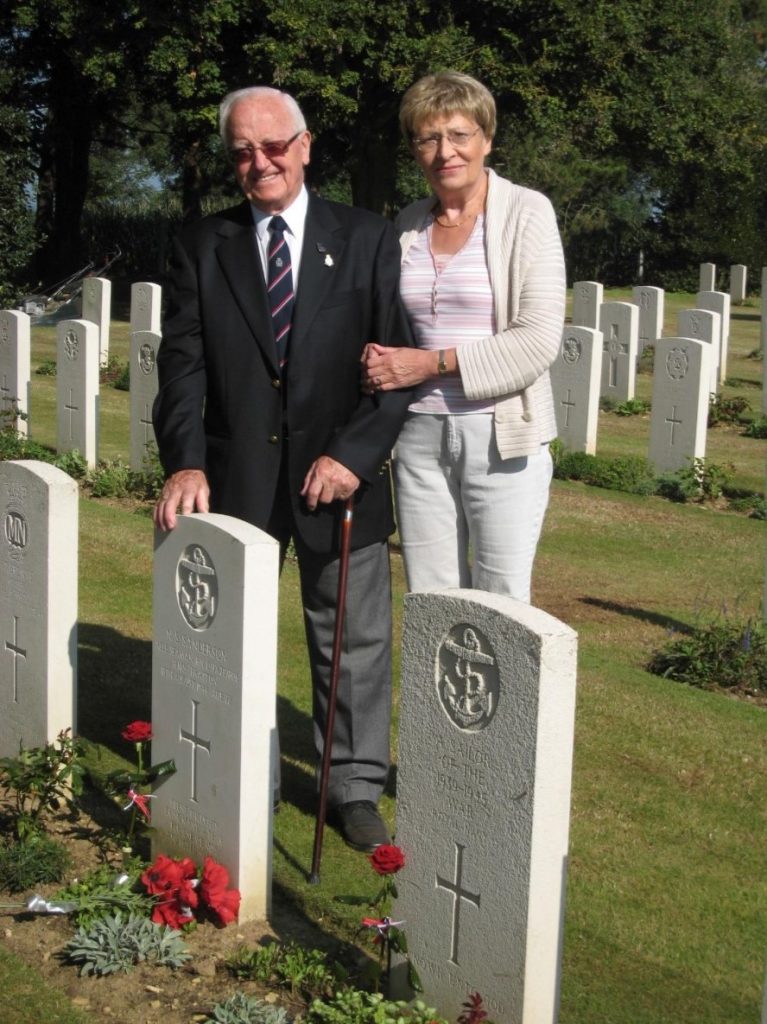 Val and Stan standing besides graves of the Men of HMS Fratton and the grave adopted by Val in Ryes Cemetery, 2010

Val and Stan became great friends and we visited him many times at his new home in Bath after his wife sadly passed away.

Four years after Val had found out what happened to her father, she found an unexpected part of his Story. In 2008 she went onto the Royal Naval Patrol Service Harry Tate’s Navy website forum to see if she could find further information. She was contacted by a Mr Terry Griffin whose Grandfather was none other than Frank Sullivan, William's best friend, who had also been killed on HMS Fratton. She had been hoping to make some sort of contact with Frank's family as she knew he was a great friend of her Dad's. They exchanged information about what happened to HMS Fratton and she was able to tell Terry that she had found out that Frank's body had been recovered by HMS Erebus and was then buried at sea.

The conversation then touched on the pram Val had when growing up as she believed she had been given it by Terry's grandfather, Frank Sullivan. Terry was able to confirm this. It had been his mum's pram but she felt that by the age of 11 she had grown out of it. So Frank gave the pram to William for Val, a gift from shipmate to shipmate. I would assume that this is the pram shown with Val in William Wallace's Story #1 as told by his nephew, Bill Butcher. When Terry spoke to his mum about it she remembered the pram being taken by Bill. She was sure it was blue and had a couple of dollies in it. 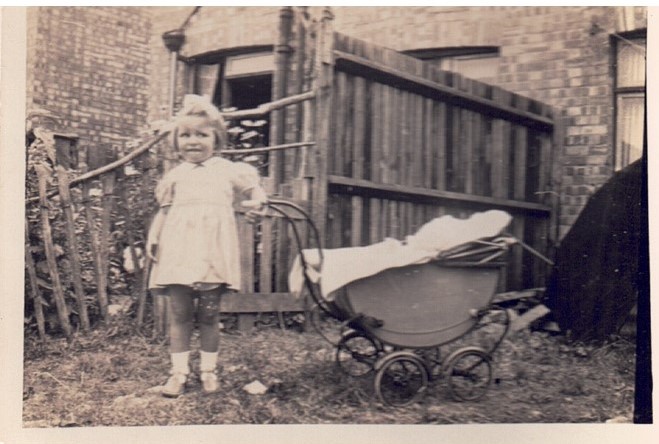 Val with her pram

Sadly Val passed away in 2019 two days after her 77th birthday following a very long brave battle with cancer. Stan attended her funeral and it was her wish to have the story of how she found Stan read at the service. I somehow managed to find the strength to do so. At the end I announced that Stan "is here with us today" at which point the congregation broke into spontaneous applause. Stan and I remain great friends. 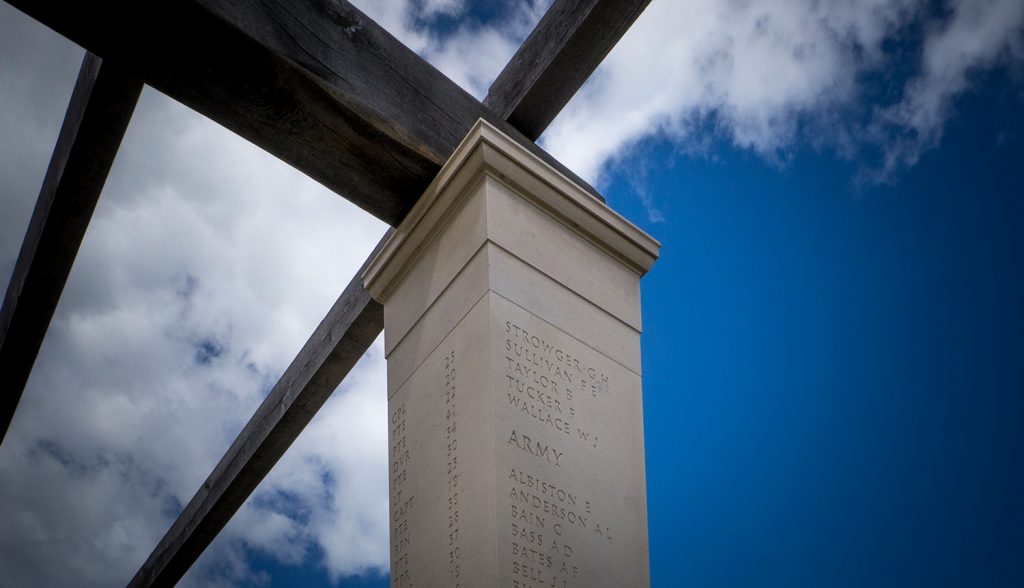