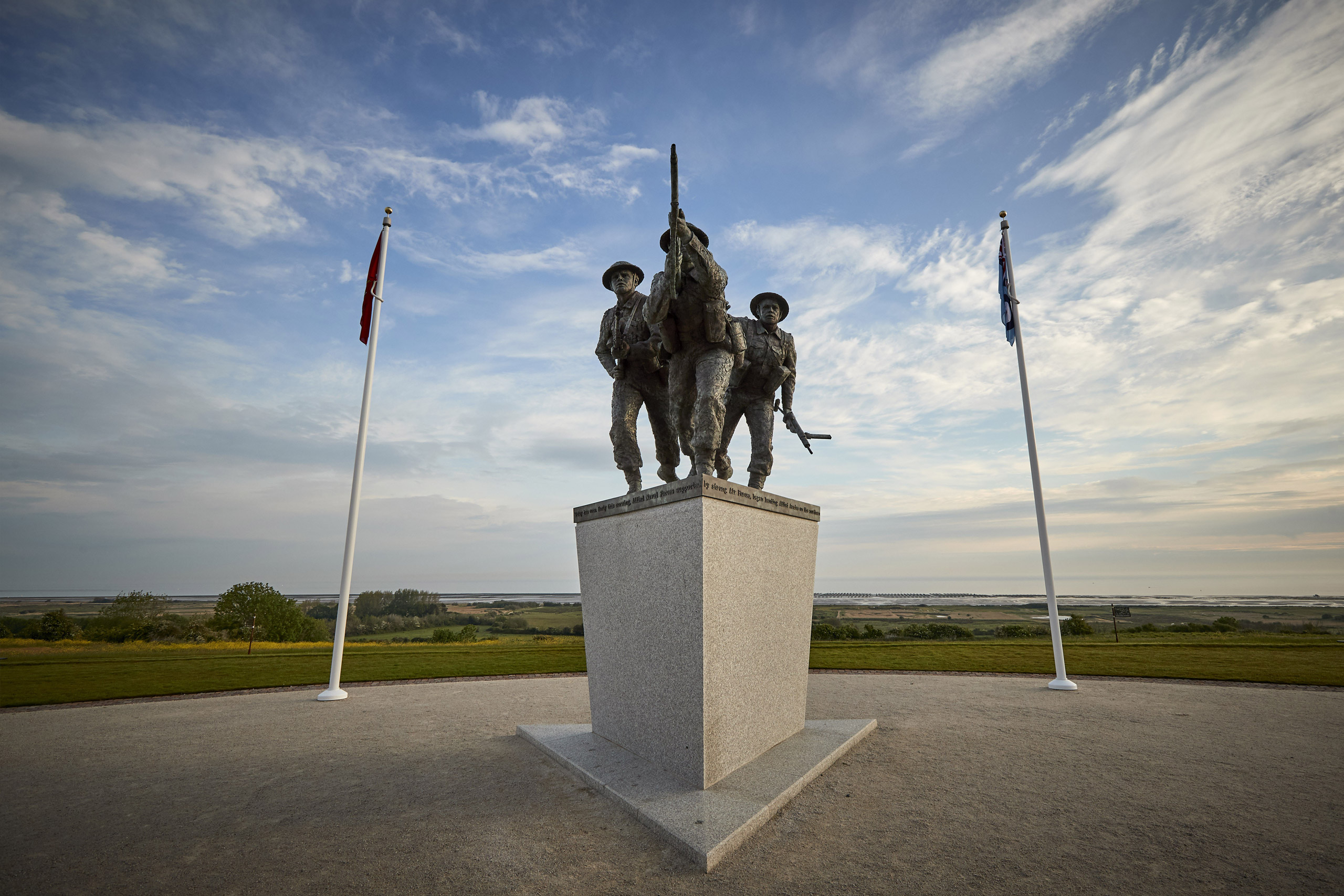 It was the greatest amphibious assault in history.

It was 6 June 1944, when British forces played a critical role – alongside forces from the United States, Canada and other Allied nations – in the landings which opened the way to the Liberation of Western Europe and the restoration of peace and freedom.

It was “D-Day” – a day which altered the course of our history, when tens of thousands of Allied troops landed on five beaches in Normandy and in airborne operations inland, to overcome the tyranny which had spread across France and much of Europe from Nazi Germany.

D-Day was just the beginning of the campaign known as Operation Overlord. On 7 June and for weeks beyond that, the Allied fleet continued to rush troops to Normandy while warships offshore continued to provide crucial gunfire support. By mid-June, the Allied land forces under the command of Britain’s General Sir Bernard Montgomery were firmly ashore.  But German forces were fighting back. The outcome of one of the most important battles of the twentieth century hung in the balance. 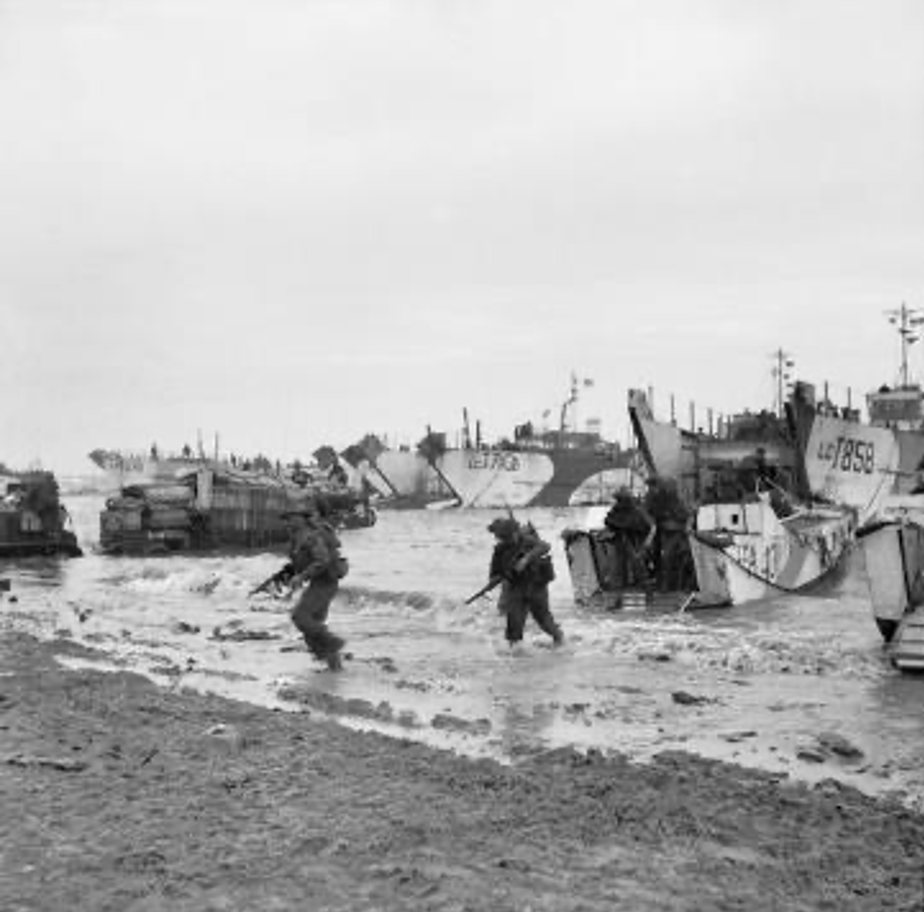 British and other Allied forces were fighting in the thick vegetation and high hedgerows of Normandy’s “bocage” terrain which the Germans found ideal for defence.

The main objective on the British-Canadian sector was to advance towards the city of Caen. Operation Epsom (26-30 June) was a major British attack to the west of Caen but military gains were limited.

Poor weather often restricted support from Allied air forces. British troops reached but could not hold the high point known as Hill 112. British casualties were heavy. By the end of June there were around 400,000 British troops in Normandy. 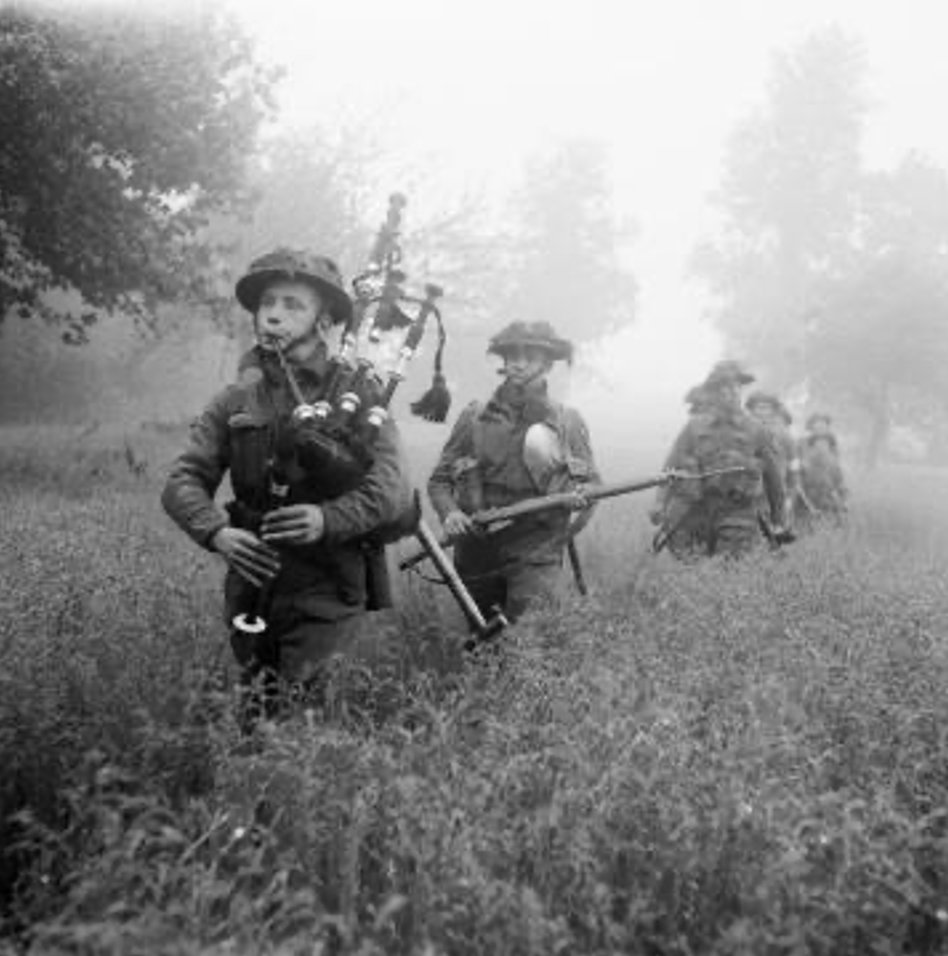 The British attack to the west of Caen had not achieved its full objectives. The Germans made powerful counter-attacks against the ground captured in recent fighting but suffered severe losses.

British and Canadian troops attacked Caen from the north, supported by 450 heavy bomber aircraft (Operation Charnwood, 8-9 July). They liberated the northern part of the city, though it was heavily damaged as a result of weeks of Allied attacks.

British forces then attacked further to the west, seizing an area including the northern part of the critical observation point of Hill 112. In the fierce fighting over the next days, some locations were captured and recaptured several times. Losses on both sides were very high, particularly amongst the infantry.

Overall the British forces made a gradual advance but at great cost. 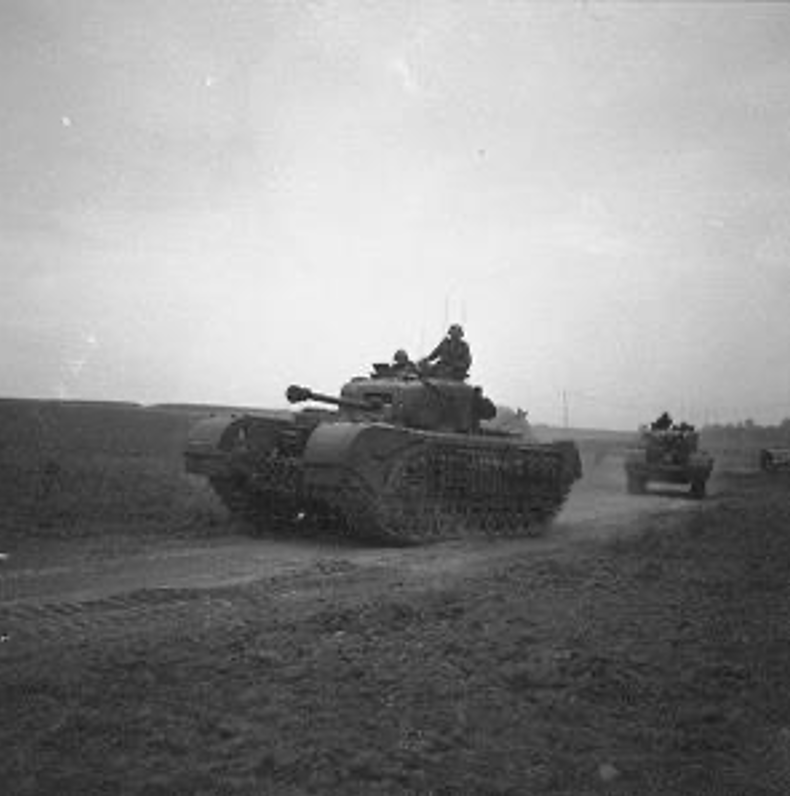 The gruelling struggle continued. Casualty rates mounted but neither side had a decisive advantage.

The next major British offensive was Operation Goodwood (18-20 July).

The attack – at the eastern end of the British-Canadian sector – made use of the high number of tanks operated by British forces supported by nearly 2,000 British and American heavy and medium bombers.

Although Operation Goodwood did not lead to as big an advance as some had hoped, the threat from British-Canadian forces in the Caen area meant that many of the strongest German units were held in that region rather than being sent against the Americans.

The British and Canadians faced more than three times as many German tanks as did their American comrades further west. This aided the American break-out to the south of Saint-Lô that began on 25 July (Operation Cobra). 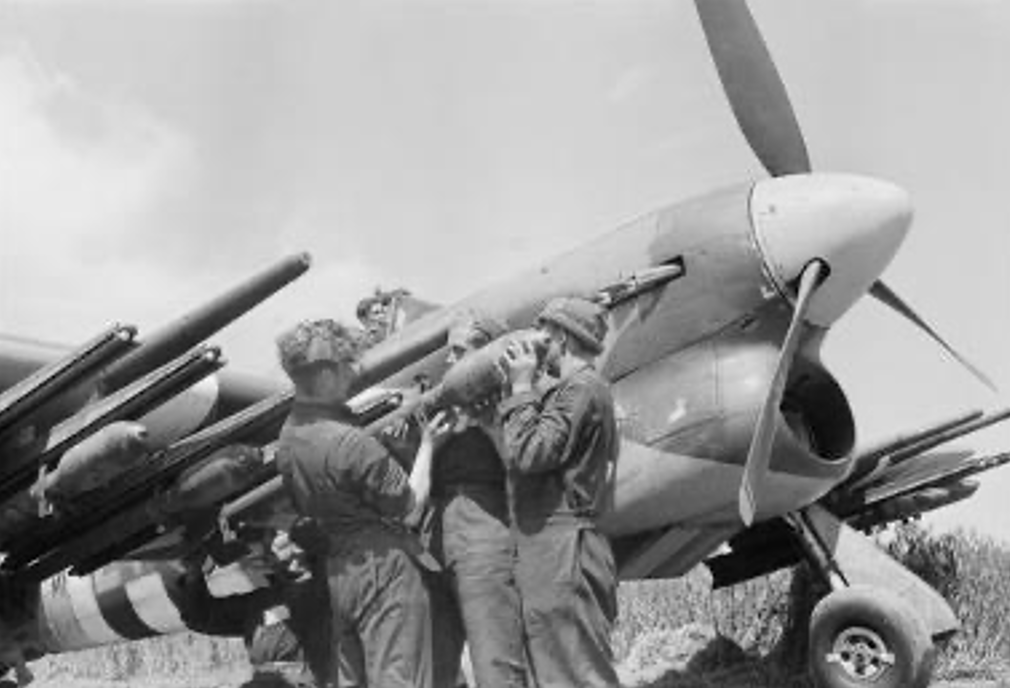 Ground crew load rocket projectiles onto Hawker Typhoon of 247 Squadron RAF at airfield B2, at Bazenville, Normandy. Such aircraft played a vital role in the fighting. IWM CL 157

At the end of July British forces moved to the west of Caen for a major attack, Operation Bluecoat (30 July-7 August).

The objective was Mont Pinçon, the highest point in Normandy. Despite heavy fighting British forces advanced rapidly. By 6 August the summit of Mont Pinçon had been captured. Operation Bluecoat and American advances further west left the German forces in Normandy weakened but still capable of fierce resistance.

To the south of Caen, First Canadian Army launched Operation Totalize (8-10 August) followed by Operation Tractable (14-15 August), both in the direction of Falaise. This Canadian-led force also included British and Polish units. Supported by heavy bombers from the UK and the tactical air forces in Normandy, significant advances were made which would contribute towards the encirclement of the majority of the German forces in the region. 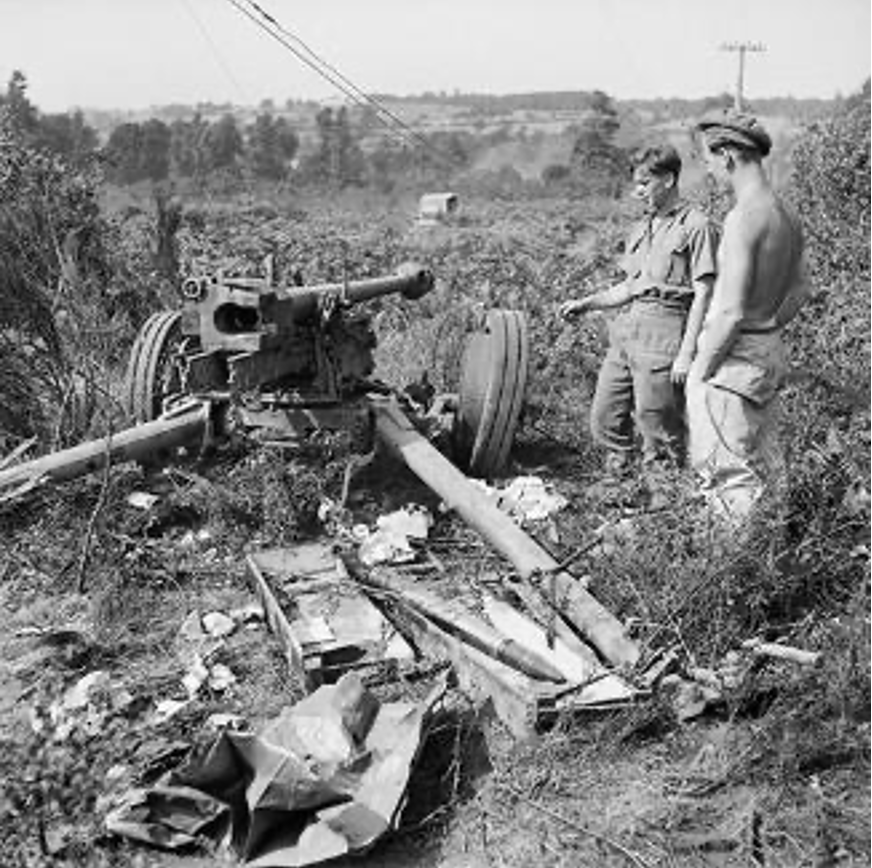 Allied forces were advancing along virtually the entire front. The Americans approached from the south, while British, Canadian and Polish forces closed in from the north. As German forces retreated under heavy ground and air attack the Allies closed what became known as the Falaise Gap, preventing further German escape.

On 1 September General Dwight D. Eisenhower took direct command of the Allied armies for the next phase of the fighting. The Battle of Normandy had ended with Allied victory, but at great cost to both sides – and to the French people who inhabited what had become a battlefield. 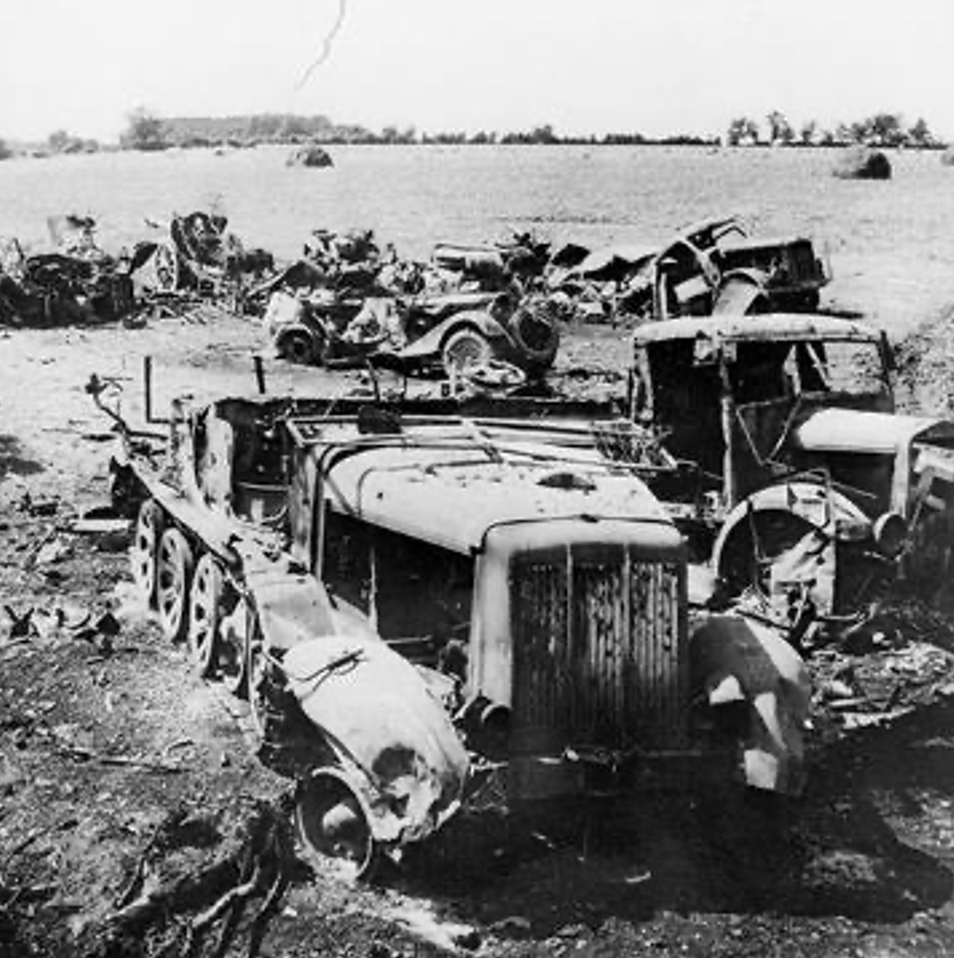 Many vehicles belonging to the retreating German forces were destroyed by Allied air attacks. IWM PL 34609