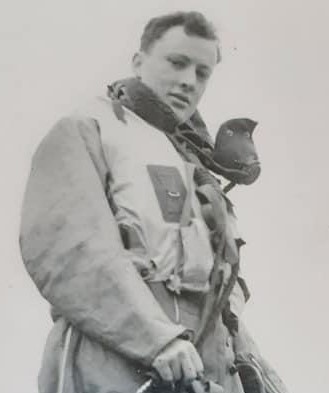 This story and photos is shared by the Trust courtesy of Michael Boucher, with additional photos and information from Shelia Thomson, Derick's daughter.

Frederick [known as Derick] Andros Grantham was born on 10 July 1916, the youngest son of the late William W Grantham, a well-known KC and member of the London County Council, and Sybil (née De la Rue) of Balneath Manor, Lewes. He was the husband of Beatrice Beverley Grantham (née Goodbody) of Lewes, Sussex. At school it was said that “...he combined charm of manner with strength of character.”

Always exceptionally keen on anything connected with flying, the photo below shows him either at the Air Service Training Club Hamble 1935/6 or The Gables, Kenilworth 1938. 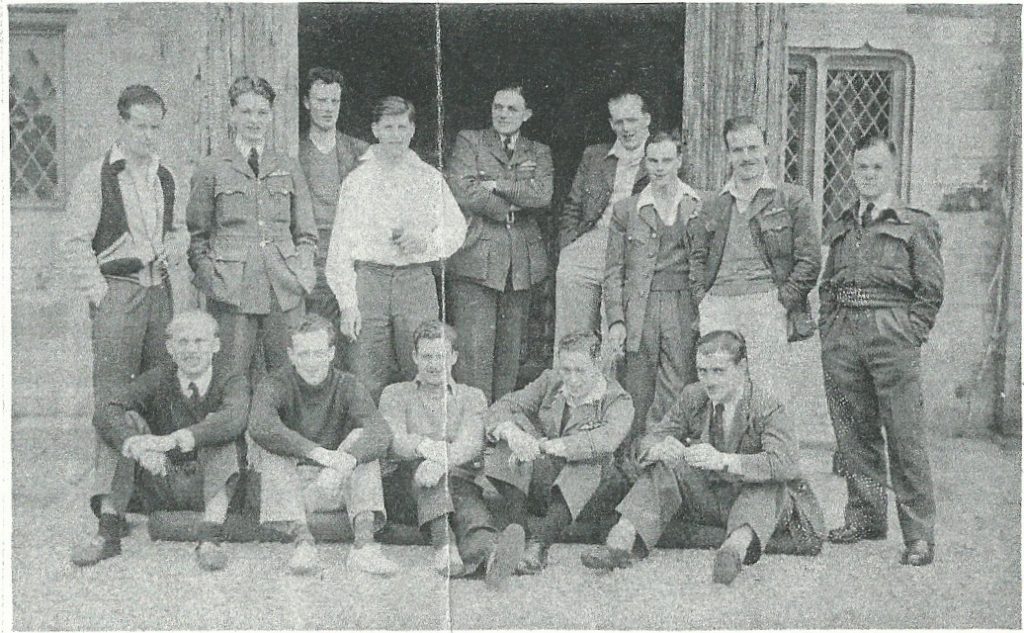 At the outbreak of war he was working as an assembly inspector in an aircraft factory at Reading and at the Miles Aircraft factory at nearby Woodley and he received a presentation from his firm "In appreciation of his devotion to duty on the occasion of enemy action in September 1940." Soon afterwards he was accepted for aircrew. 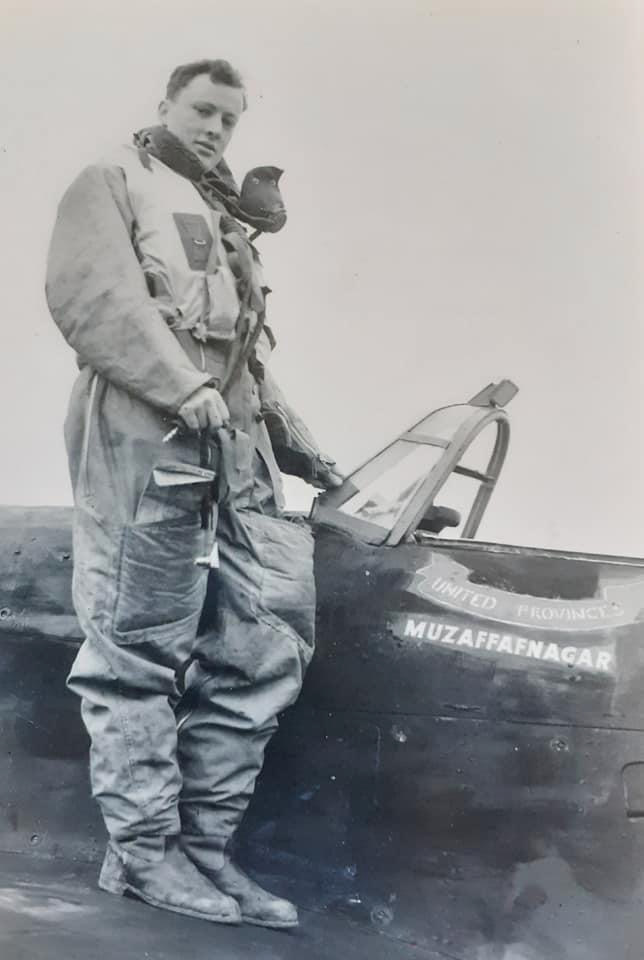 This photograph shows him standing on the wing of an 87 Squadron Hurricane Mk IIc. I believe this was taken at either Exeter or Charmy Down in 1941 when the squadron was involved in night fighting operations. His RAF nickname was “Granny” -  it is both a truncated version of Grantham but, as he was one of the oldest members of the operational pilots, being in his late twenties by 1944 whereas most of the pilots were in their early twenties or late teens, he was referred to as "Granny".

Having been posted to 174 Squadron flying “Hurribombers” he took part in the Dieppe Raid of 19 August 1942. 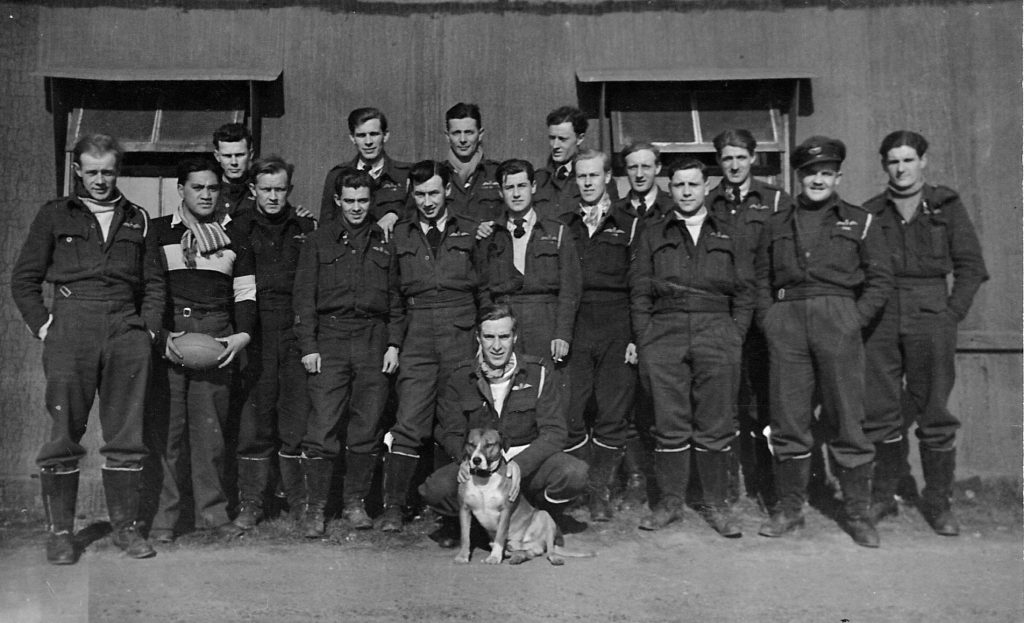 The squadron was hard hit, losing five aircraft in the operation including their newly appointed French CO, Emille Fayolle, who was killed. In March 1943 174 Squadron converted to the Hawker Typhoon. On 5 October 1943 he was flying on a ‘hit and run raid’ with F/Sgt George Boucher. They attacked a train and when the boiler exploded a piece damaged Boucher’s plane and he had to crash land.  (Boucher is also commemorated on the British Normandy Memorial. You can read about his story here).

Boucher was able to evade capture, assisted by a number of French people, and made it back to Britain. On hearing of George’s successful evasion Derick wrote George a letter on 28 Dec 1943. 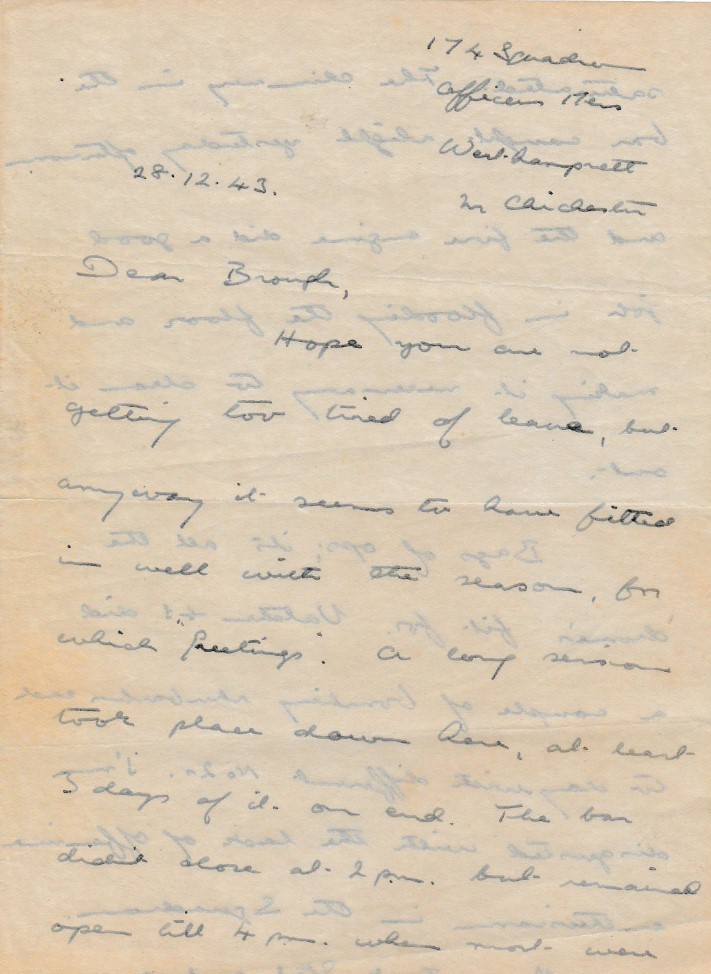 The full transcription is as follows:

Hope you are not getting too tired of leave, but anyway it seems to have fitted in well with the season, for which “Greetings”. A long session took place down here, at least three days of it on end. The bar didn’t close at 2 pm but remained open till 4 pm
when most were saturated. The chimney in the bar caught alight yesterday afternoon and the fire engine did a good job in flooding the floor and making it necessary to clean it out.

Bags of ops; it’s all the ‘dromes’ fit for. Vatcher and I did a couple of bombing rhubarbs each today with different No 2s. I’m disgusted with the lack of offensive enthusiasm in the Squadron.

You, Jock Steel and a couple of U/T Canadians are the only people in the Squadron always ready to go. I took one of the U/T Canadians this afternoon on his first ops trip with never having dropped a practice bomb even.

The C.O. wrote to 83 Group requesting your return and I gather he has seen something to the effect that you are posted back a very good thing.

Cheerio for now
Derick Grantham
I bet your hair isn’t as long as mine. There isn’t time to get it cut!!

On the 8 January 1944 near Villaoche he shared in the destruction of a Junkers 88 with F/Sgt Steel. The 18 February 1944 saw him lead a group of 174 Typhoons escorting Mosquitoes on the Amiens prison raid. The weather conditions were particularly bad and the attack took place at low level. Two aircraft were lost with one pilot killed due to running out of fuel. Those that made it were so low on fuel some had to divert to the nearest airfield. On 16 March 1944 north of Etampes he shot down an Arado 96 trainer.

He was awarded the DFC, gazetted on 14 April 1944. His DFC citation stated: "Both as a pilot and as a flight commander this officer has displayed a fine fighting spirit and determined leadership. He has probably destroyed one enemy aircraft and damaged another and has also destroyed a number of motor vehicles and barges. During a recent long range sortie in the area of Paris, although hampered by a failure in his aircraft, he made a telling attack on a Junkers 88, pressing it home despite heavy anti-aircraft fire. On all occasions his courage and devotion to duty have been exceptional."

As D-Day approached the squadron attacked radar and marshalling yards to disrupt the enemy infrastructure. They operated out of  RAF Holmsley South but shortly after D-Day the squadron began flying from B2 ALG [Advanced Landing Ground] - Bazenville, B3 ALG - St Croix-sur-Mer and B4 ALG - Bény-sur-Mer, France. They then moved to their permanent base at B5 ALG - Le Fresne-Camilly.  Their role as part of the Second Tactical Airforce was to support the ground troops by attacking tanks, motor transport, armoured vehicles and strongpoints. 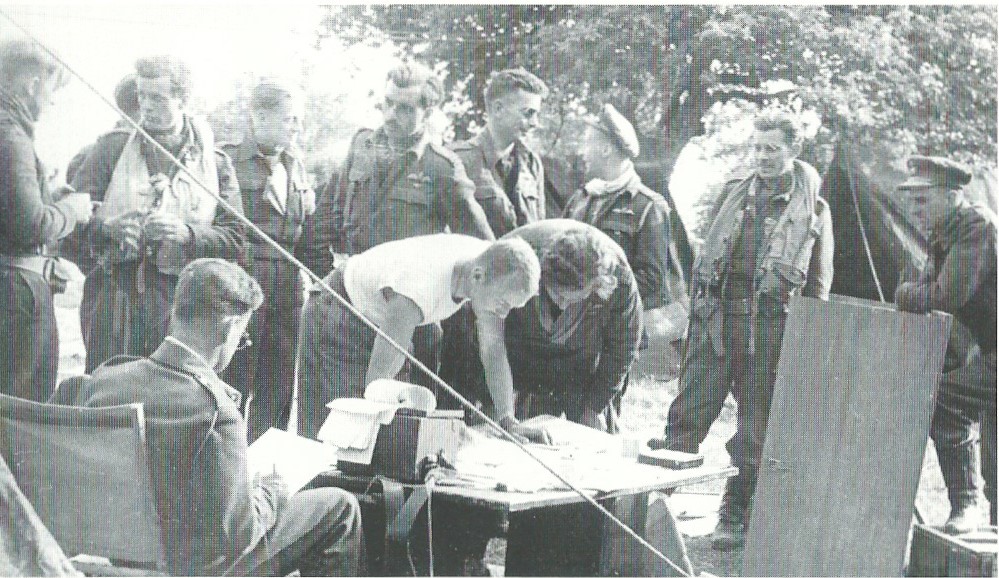 On the 23 June he was in a group of eight Typhoons that successfully destroyed a concentration of armour. He is shown with them in Normandy in this press picture published on the 27 June 1944. 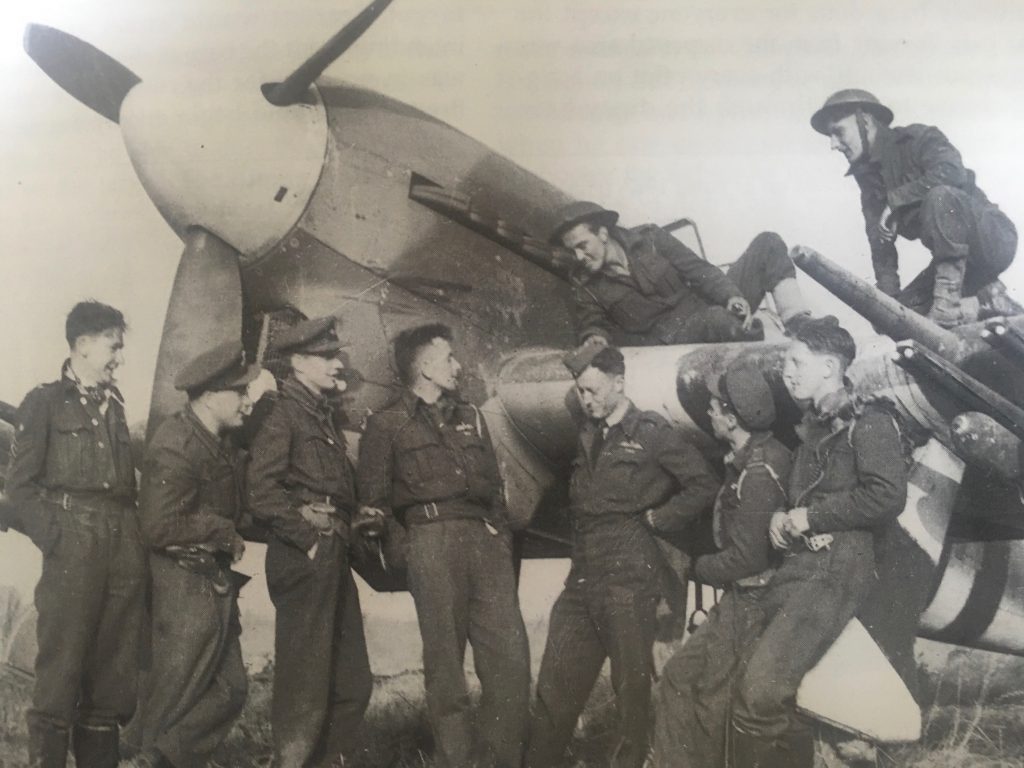 Derick stands 3rd from the right

At the start of August he became acting Squadron Leader of 174 Squadron when Bill Pitt-Brown became Wing Commander of 121 Wing. 121 Wing consisted of 174, 175 and 245 Squadrons based at B5 Le Fresne Camilly. It was on 14 August 1944 whilst leading an armed reconnaissance of the Falaise-Marteaux area with six Typhoons that he was told he would be taking over as CO of 245 Squadron. According to John Golley, [a pseudonym of one of 245’s pilots], "Flight Lieutenant Granny Grantham, from a sister squadron, had been clobbered and had to bale out after hearing the news over the RT [Radio Telephone] that he would be taking over 245.”

Derick's Typhoon Mk 1b, XP-S MN577 was hit by flak, resulting in a glycol leak which caused an engine failure but he baled out safely. He was helped by Louis Bredrey and his family. Over the next two days they hid him and gave him meals. Louis suggested he changed into civilian clothes but he refused because he didn’t wish the Bredrey family to have difficulties with the Germans should he be discovered (if he was not in uniform the Germans often regarded evading pilots as spies).

The Bredrey family wished him to remain hidden but he was determined to return to Allied lines which were not far away. He set out on the night of the 16 August and Louis Bredrey accompanied him over some fields as far as a river. It is known that he covered a further 2.5 miles and obtained some milk from a woman.

On the 17 August the Germans found his body in a wooded area behind the church in La Courbe. He had apparently been killed by shrapnel from a British artillery attack. The German’s had temporarily buried his body but instructed M. Chaptois, the Mayor of La Courbe, to find it and arrange a proper burial which he did. Derick's body was taken for burial in the churchyard of La Courbe, the only British grave in the churchyard. The inscription on his grave reads: ‘He gave his all for England’.

Further tragedy was to strike the family. He and his wife, Beatrice had had a baby daughter, Sheila, born in the summer of 1943 but tragically Beatrice died in 1945, leaving their daughter an orphan. 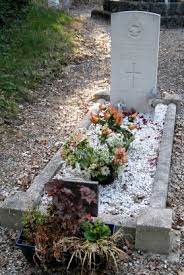 It was above the French village of Giel-Courteille, near to La Courbe, Basse- Normandie that Derick baled out of his plane and where he was sheltered by Louis Bredrey.  In 2004 Stéphane David and the l’Association Normandy du Souvenir Aérien erected a blue commemorative plaque in his memory.  On 19th August 2006 Shelia Thomson, Derick's daughter, and other members of the Grantham family attended a remembrance ceremony and Sheila gave an address. Also present was Gisèle Grée, Louis Bredey’s daughter. He is also remembered on the Chailey war memorial. 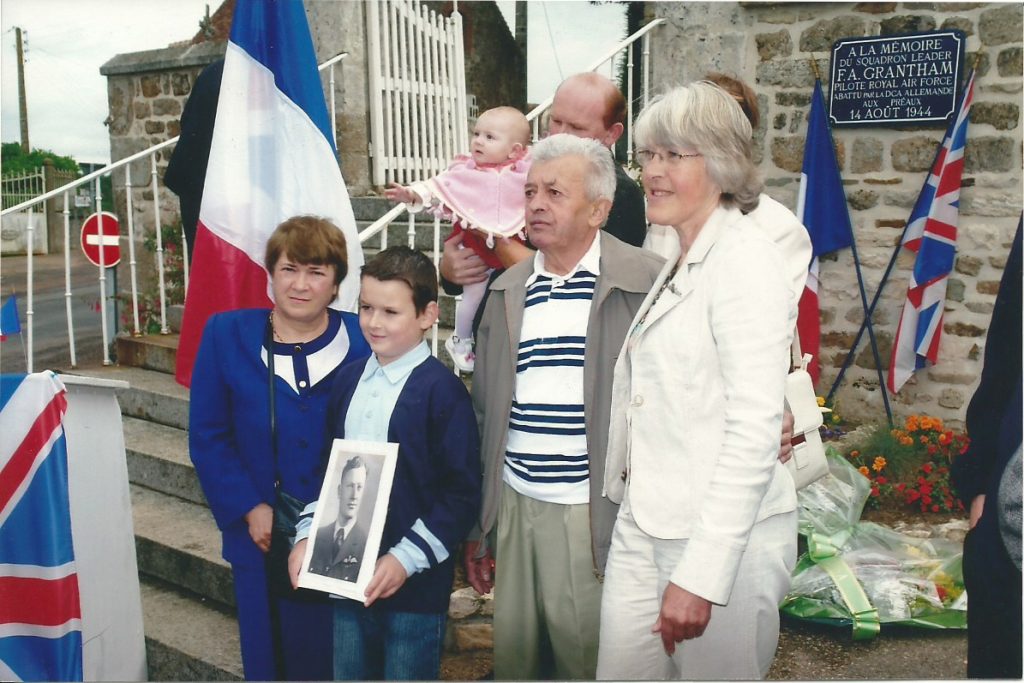 At the memorial plaque. L-R Gisèle Grée and her husband Bernard, Sheila Thomson

B2, B3, B4 and B5 Advanced Landing grounds were one of a number of temporary airfields built in Normandy. These airfields were built to help exploit the Allied air superiority by maximising the time aircraft had over the battlefield and reduce any potential impact of them not being able to get to France from Britain due to adverse weather. On 22 June 1944, 174 Squadron moved to B5 airfield.