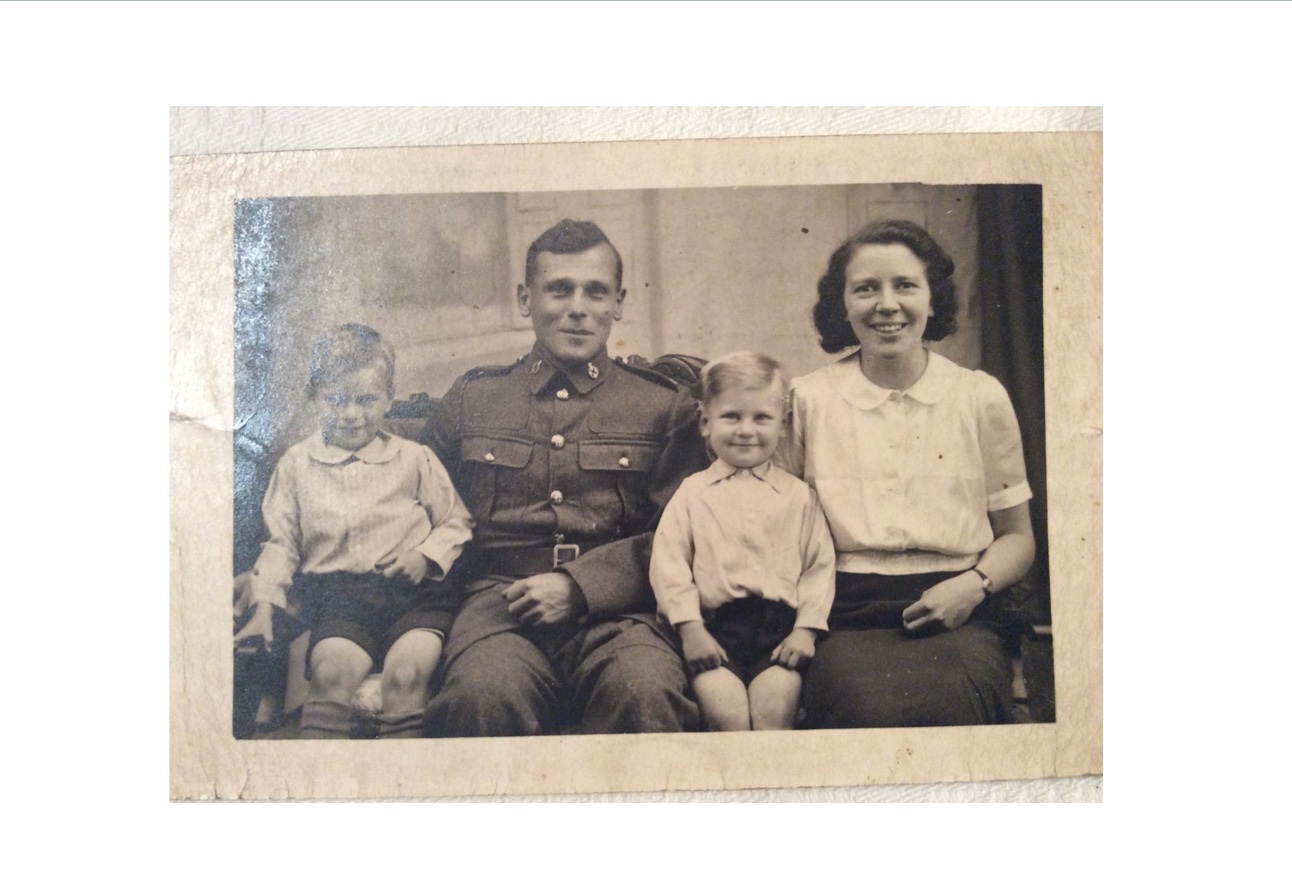 One Family, Two Guardians: A Tribute to a father and grandfather

Carol Morris and her father Peter Harmsworth have both recently become Guardians of the British Normandy Memorial. Carol, whose grandfather Stanley was a D-Day Veteran, shares his story and reflects on why two generations later, the sacrifices made all those years ago must never be forgotten.

On 6 June 2020, the 76th anniversary of D-Day, I was watching BBC Breakfast when they talked about the British Normandy Memorial and revisited the story of Veteran Harry Billinge who raised more than £30,000 for the Memorial. It was mentioned that you could become a Guardian to help fund the future maintenance of the Memorial.

Without hesitation, I signed up to become a Guardian. I then discovered that I could gift a guardianship as a Father’s Day gift. I thought this was an excellent idea, especially as my father had also turned 80 in April and because of lockdown we were unable to celebrate properly and I hadn’t been able to buy him a present either.

My Grandfather, Stanley Bertram George Harmsworth was born on 4th October 1911.  In 1942 he was enlisted into the General Service Corps embodied Territorial Army.  He was then transferred to the REME (Royal Electrical and Mechanical Engineers) later that year.  He was released to Army Reserve in January 1946 and then attended training in 1952 with the RASC (Royal Army Service Corps).  He was then discharged as he had no further liability for recall in 1956.  He was a carpenter by trade.  On 6 June 1944, he landed on Juno Beach in one of the early waves supporting British and Canadian Troops.  His role was beach clearance, responsible for getting tanks and other transport and equipment that had been landed, off the beaches ready for action.  He remained in Normandy throughout the summer.  He then moved inland, clearing the roads of destroyed and broken down vehicles to aid further progression by the troops inland.

By the end of the war, he was in the Netherlands and was there for the Liberation and for VE Day itself. After the war, he returned home to his wife Elizabeth and young family including my father Peter and his older brother John who were 5 and 7 respectively.  My Uncle Roger was born in 1947. 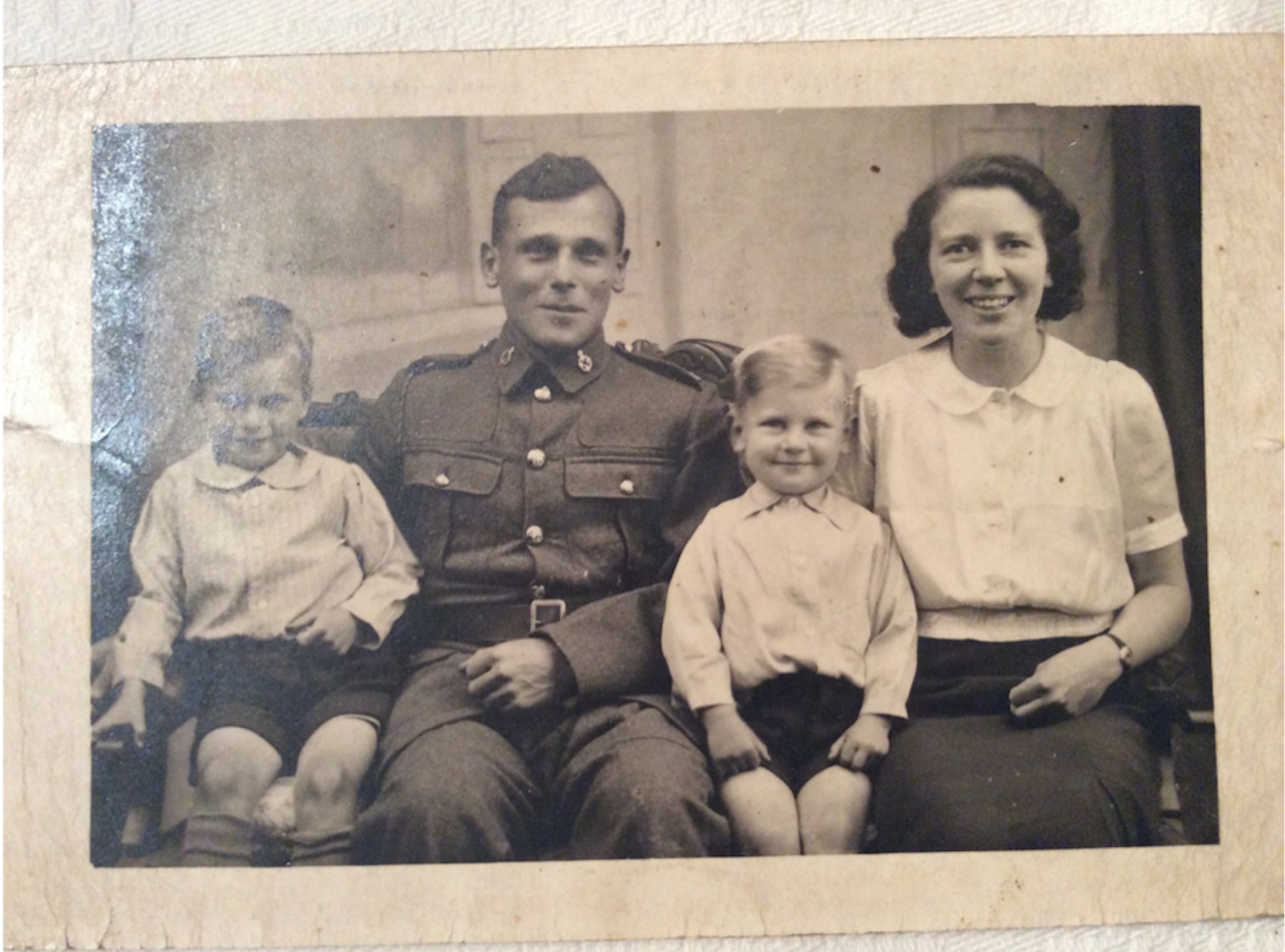 Pictured from left to right: My Uncle John, Grandad, Dad and Nanny. Taken in 1943. 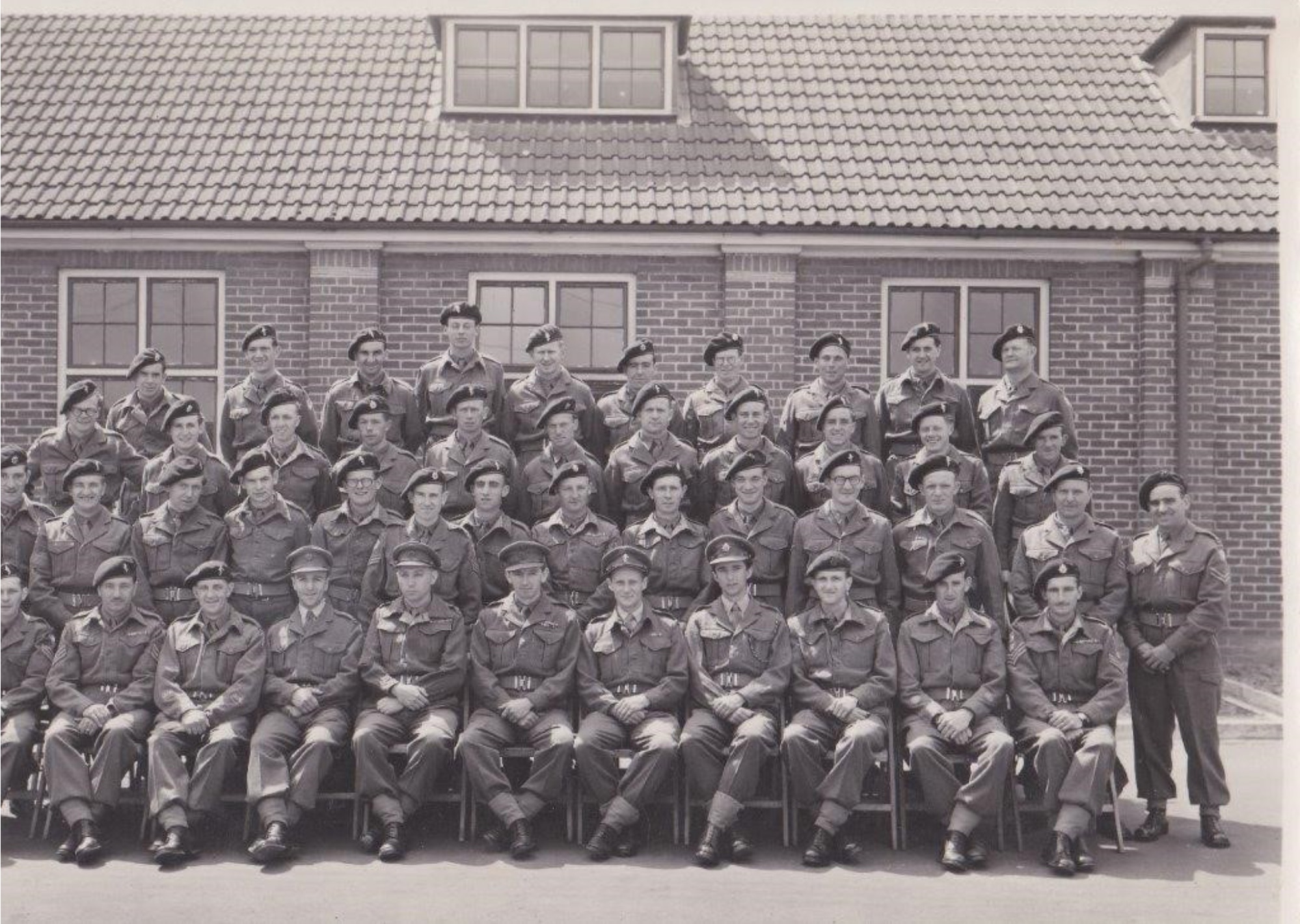 Grandad was an active member of the Royal British Legion, along with my Nanny who was a member of the Women’s Branch.  He was also a Standard Bearer and took part in the Festival of Remembrance at the Royal Albert Hall on at least one occasion.  He returned to Normandy in 1994 for the 50th Anniversary and in 2004 at the age of 92 he returned for the final time to commemorate the 60th Anniversary with the Normandy Veterans Association.  He also returned to the Netherlands to commemorate the 60th Anniversary of Liberation where he was presented with a medal (pictured below). 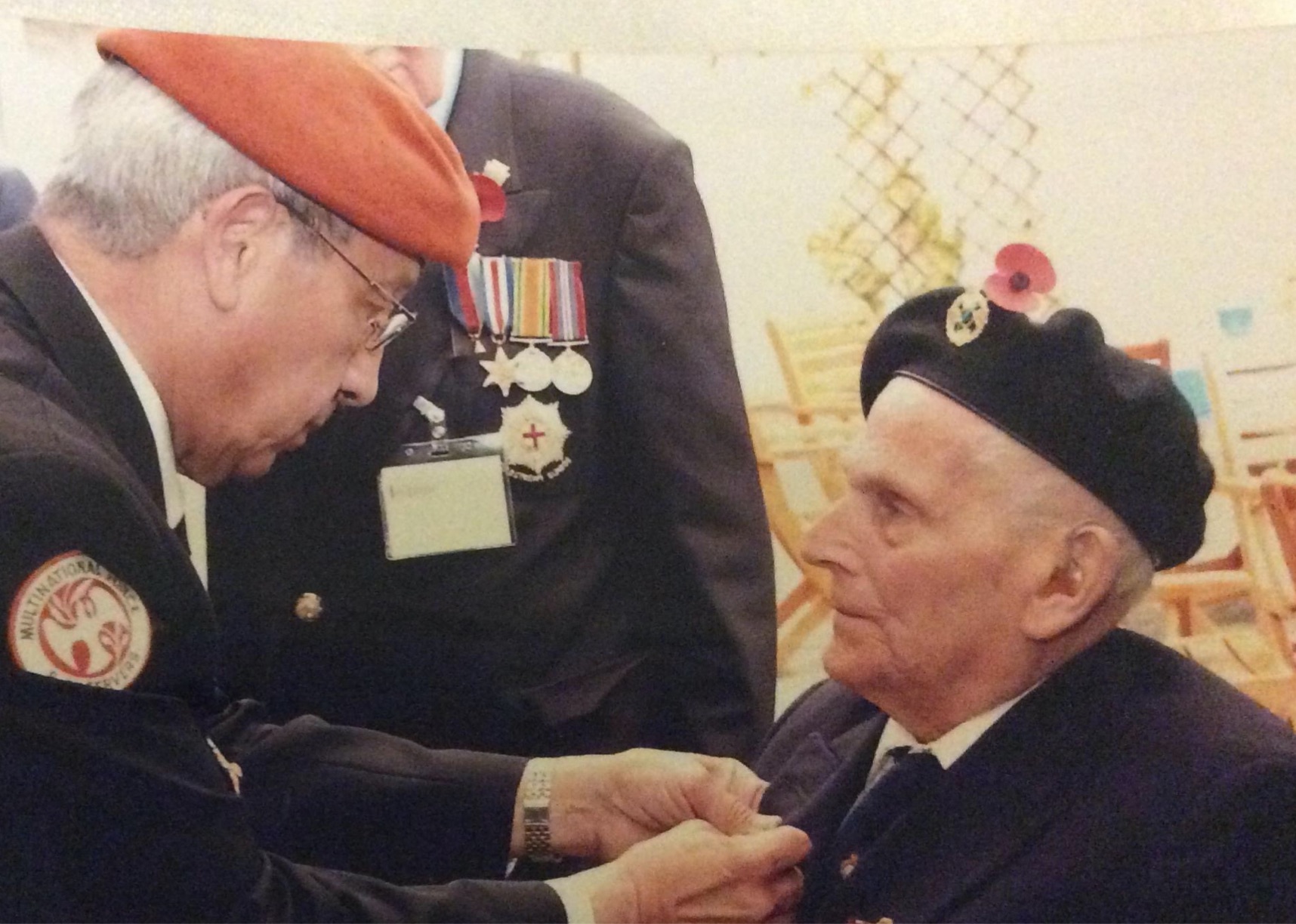 At his final trip to Normandy, he participated in various events, culminating in an event at Arromanches Beach.  At the Arromanches ceremony he met various members of the Royal Family, including the Queen.

I was on holiday in Normandy at the time, but due to very strict security and exclusion zones, I was unable to get to the beach to see him in his final D-Day Anniversary event which was very upsetting, so I vowed that I would return to Normandy on his behalf in 2014 for the 70th Anniversary.

In June 2014, I made good my promise to travel to Normandy for the 70th Anniversary.  I booked myself on a trip organised by the Royal British Legion, along with a number of Veterans and their families and was extremely fortunate to have pretty much front row seats at the service held at Bayeaux Cemetery in the presence of the Queen and The Prince of Wales.  Also in attendance was the Prime Minister at the time, David Cameron along with the Prime Ministers of New Zealand and Australia.  Proudly wearing his medals, I met many Veterans that day and watched as members of our group were introduced to the Queen, The Duke of Edinburgh and the Prince of Wales.  They took plenty of time to talk to each of them in turn which was amazing and I also met various senior members of the British Army along with members of the Armed Forces from Canada, Australia and New Zealand.

Pictured below is the Queen in Normandy at the 70th anniversary of D-Day in 2014. 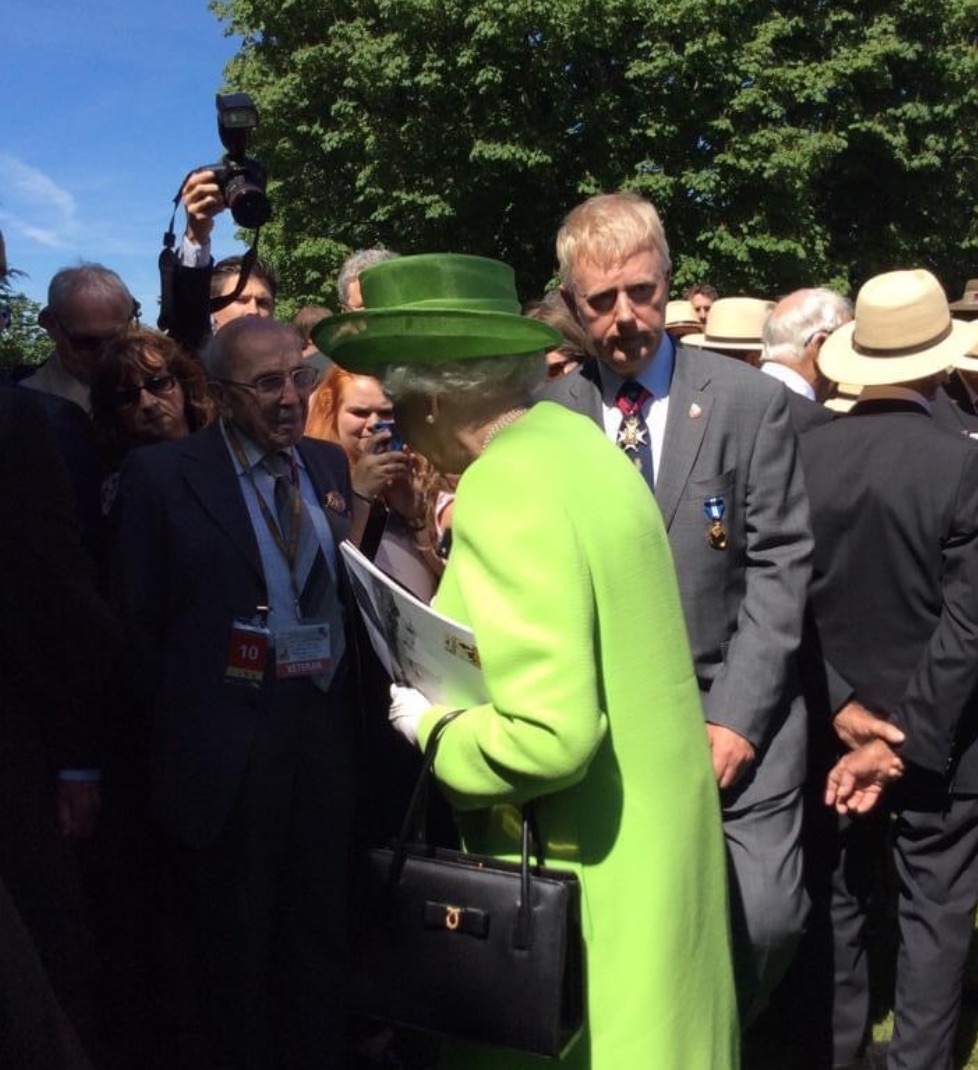 Being a Guardian of the Memorial is very important to me as I want to play my part in ensuring that it is maintained for future generations to visit and pay their respects to those servicemen and women commemorated there, who gave their lives for their country.  These men were not as fortunate as my Grandad, who returned home to his family to live a long and happy life until he passed away at the age of 94 in April 2006.  Becoming a Guardian is also my tribute and thank you to him for what he did during the War and I very much look forward to its completion and will definitely visit as soon as it’s possible to do so.

Click here to find out how you can become a Guardian.