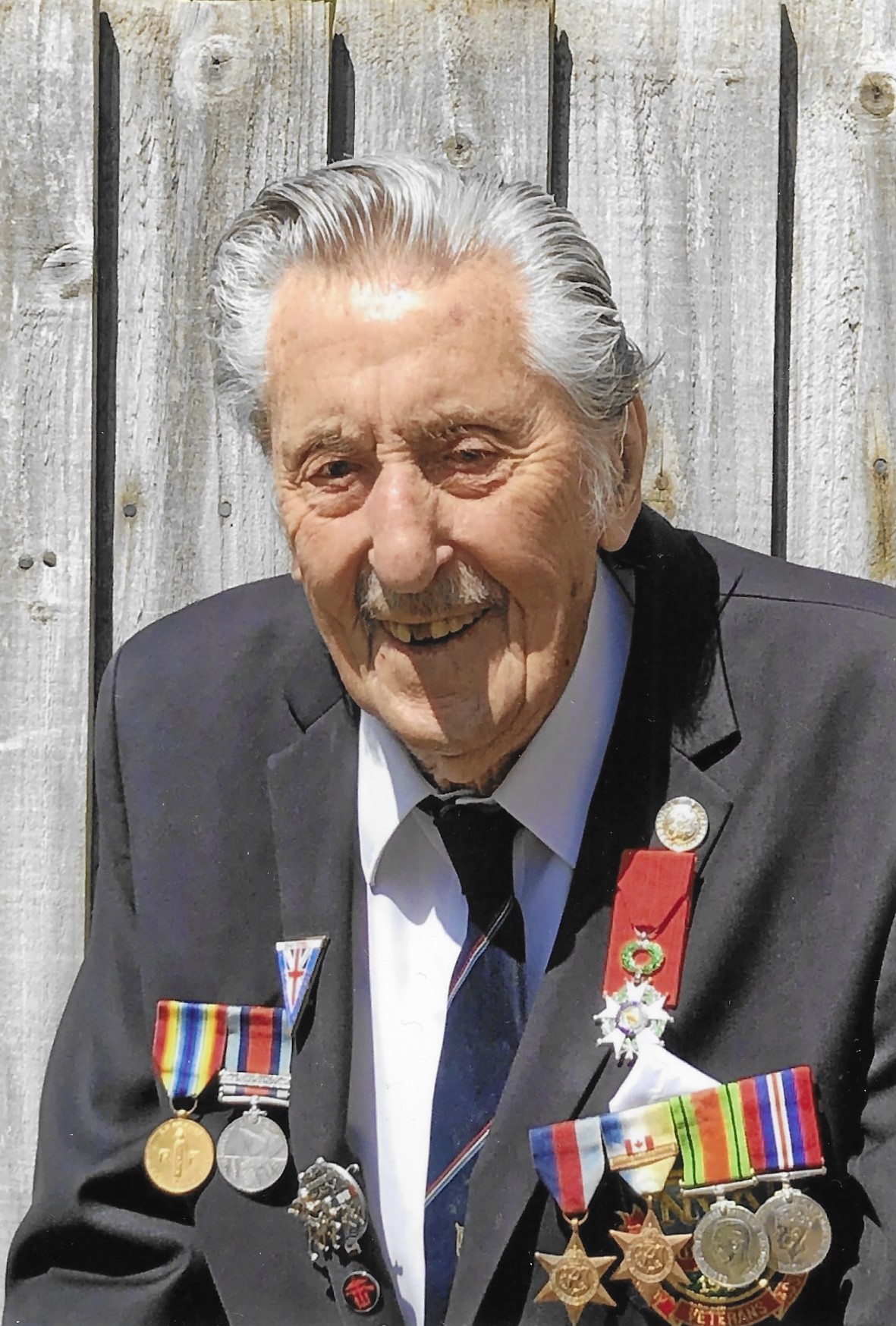 The story and photograph is shared by the Trust with kind permission from Graham Emmings, Ted’s son.

Ted joined the Navy in 1941 when he was just 17. He took part in the Dieppe raid in August 1942 and in January 1944 he began training as a landing craft coxswain. During the training he took part in the ill-fated landing rehearsals at Studland, landing some American GI’s. One of the Americans on his LCA said, “This is going to be a piece of cake” to which Ted replied, “I don’t think so.”

Ted was assigned as Coxswain in 512 Flotilla, aboard the SS Lady of Mann, which was assigned as a Troop carried. On D-Day it carried the Royal Canadian Winnipeg Rifles who were landing on Juno Beach. Ted’s LCA landed as part of the first wave. On approach to the beach they struck a submerged beach defence, setting off its mine and causing the ramp to buckle. As a result, when they hit the beach the ramp failed to open. Under heavy fire, Ted and his colleague, Danny, jumped over the side, and manually pulled the ramp down, allowing the battalion of Canadian Winnipeg Rifles they were carrying to disembark. Some did not get far but most did and achieved their objective of taking one of the bunkers on Juno Beach.

Ted then pulled the ramp up to return to SS Lady of Mann but whilst reversing off the beach, they struck another mine which blew the back off their LCA, causing it to start sinking. It was during this action that two of the crew were killed. Ted manoeuvred the craft away to avoid cluttering the beach approach with sunken craft for the next wave of the assault craft. Ted and his crew were picked up by an LCT and returned to SS Lady of Mann where they were assigned to another LCA. They then made another three runs to Juno Beach.

When the day was over, Ted was given a tot of whisky in the mess deck and was asked to volunteer for the beach clearance party as the men originally assigned to it had somehow been left in Portsmouth. After a night’s rest Ted went to the beach where he spent three days doing beach clearance. This involved, amongst the many jobs they did, collecting and identifying bodies and retrieving equipment.

On D-Day +4 Ted’s part in the Battle of Normandy was over. He was reassigned to another craft and went out to the Far East, but to this day he never spoke about what he did out there. He was discharged from active service in 1946 when he was assigned to the Royal Fleet Reserve and was discharged from the reserve in 1956.

Ted’s activities on D-Day were eventually recognised and he was due to to be mentioned in post-war honorary despatches but in his true modest self he never signed the paperwork for this to happen.

Ted became an active member of the Normandy Veteran’s Association with his wife, pearl, and acquire honorary membership for his daughter, Julie and son, Graham. he became the chairman of the Aldershot branch until it disbanded on the 70th anniversary of D-Day.

Ted and Pearl would go to the annual remembrance parade in Arromanches and ted would quite often wonder what happened to the troops he carried to Juno Beach that day. On the 60th anniversary we took Ted to a Canadian war memorial service some miles inland from Juno Beach. Ted met a Canadian veteran, and during discussions it became apparent that the chap he had met had more than likely been on his LCA. On his yearly pilgrimage to Normandy, ted used to go to Canada House on Juno Beach and became great friends with the Canadian veteran. He also made sure he went to the cemetery at Bayeux to lay a cross at the grave of his fallen shipmates.

Along with all of the D-Day heroes, Ted was awarded the Legion d’Honneur, France’s highest military award, which he wore with pride. He passed away in 2021.

Ted Emmings, a humble man. A great man. A Hero. rest in Peace Sir. Thank you for your service. Stand easy.