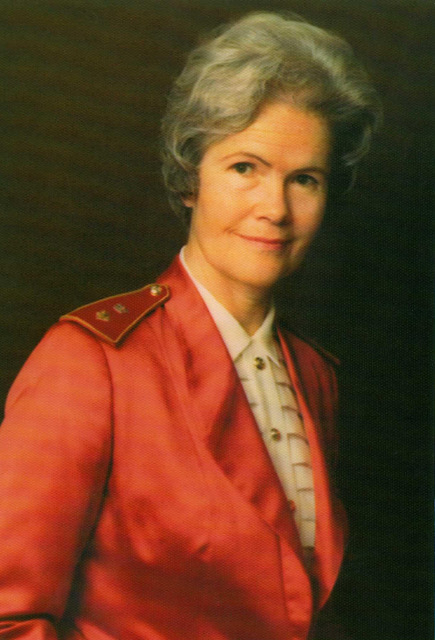 Lt Col Maureen Gara RRC QARANC (1916-2009) trained at Bury Infirmary in 1936 and joined the Queen Alexandra’s Imperial Military Nursing Service in 1943. She was posted to 79th General Hospital and began training for Normandy.

In mid-June 1944 they embarked for Normandy and spent the first night in the trenches before arriving at the 600-bed 79th General Hospital at 10am the next day. The tents for the hospital had already been erected so they did not have much to do to get it ready for their first casualties who began arriving later that afternoon and continued to do through the night. They eventually dealt with 400 casualties on their first day.

The Bayeux area was called Harley Street and became a massive complex of field hospitals. There was an airstrip nearby and an efficient evacuation system was effect. Blood supplies arrived on a daily basis and in a few days they were joined by another 600-bed hospital so they alternated admissions and evacuation which gave a day to reorganise. The 79th General Hospital remained in Bayeux as the Allied armies advanced to Paris but in September it packed up and moved to Holland to continue its work there.

Maureen gave an interview about her experiences in Normandy as part of a school project.

Q: How did you feel when you landed in Normandy?

A: Rather nervous, excited, and fearing the unknown. None of us knew what to expect.

Q: What experiences did you have, whilst nursing Allied soldiers?

A: There were a lot of very badly injured troops and because we were near the front line, a lot of them came to us.

We slept in narrow trenches, six to a trench. We slept in full uniform, even helmets and boots, and were so packed in that our feet touched the head of the sister below. We were not allowed to talk at night, so if we noticed anything above ground, we had to tap the tin helmet of the person at our feet with our boot, and tug on the feet of the person above. There were two guards walking up and down either side of the trench.

I remember one incident where I woke up and saw something moving behind a tree. I alerted the other people in the trench, and the guard lent down. He didn’t say much; just whispered “Where”. I pointed to the tree here I thought I saw the movement. Then he fired. It wasn’t a spy, just a little French cow, and the farmer who owned it demanded compensation. It was the first time we had had roast beef since we joined the war!

Q: Did you have any frightening encounters with the Nazis?

A: I had a very frightening experience with a senior Nazi officer. He was a prisoner of war, and I was nursing him. There were others with him. They spat at us, and called us “You pigs”, and other insults. As they spat at me, they suddenly sat up in their beds, exclaiming “Heil Hitler!” I retaliated, hurling a bucket of water at them

Q: Roughly how many soldiers did you have to care for?

A: Throughout the war, hundreds of thousands. In the area I was in, there were ten hospitals. The stream of casualties was unimaginable. Totally, I am not sure of the exact figures.

Q: Do you feel proud for all you have achieved?

A: I’m proud really, but I was playing a part in saving so many young men. The main reason that the army was never short of volunteers was that everyone felt that they had to do their bit. The thing I feel proudest of if that we were doing highly professional work, with very primitive facilities.

Q: Do you have any pleasant memories of your nursing during the war?

A: A lot of it was very pleasant….we went to some lovely places in Europe, and it’s amazing how comfortable you can make a tent! The best thing was the sense of friendship and community. This sort of companionship and loyalty can only be found in situations like it. Everyone was loyal to everyone else, no matter who they were.

There were a few funny moments. For example, we illegally kept a coop of hens at the bottom of a field, and smuggled the eggs to the wounded soldiers, stuffing them into our boots and our uniform. The patients were overjoyed. Eggs were a delicacy as far as they were concerned

In September 1944 she moved with the hospital to Holland.