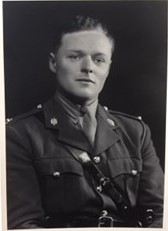 The story and photographs are shared by the Trust with kind permission from Lieutenant Colonel (Retired) Mark Jackson, son of William Temple's widow from her second marriage.

William ("Bill") Temple was my mother’s first husband, and father of my half sister who never knew him. He was born on 20/09/1914 in Kelowna, British Columbia, Canada.

His father, Anthony Temple, a solicitor from Dorset emigrated to Canada arriving in Halifax, Nova Scotia, aboard the SS Victorian on the 28th March 1910, and settled in Kelowna, British Columbia. On the 16th June 1913, at St Michael’s, All Angels Church, Kelowna, he married Gwendolen Marion Binger.

On the 8th December 1914, at the rather advanced age of 35, Anthony Temple joined the 2nd Canadian Mounted Rifles. Having already served as a Lieutenant in an Active Militia, The British Columbian Horse, he was immediately advanced to Captain. The battalion became part of the Canadian Overseas Expeditionary Force and sailed for France in September 1915. For the next six months the battalion were moved in and out of the trenches. But Captain Anthony Temple was ‘killed in action’ on the 5th April 1916 at the age of 36.

On the 15th July 1919 Gwendolen and William arrived in England. Even though she returned to Canada it was clear she intended to settle in England in order to get her son educated and, on the 10th September 1922, they left Canada for the last time. She remarried in 1924.

William attended Belvedere School, Hove, and Haileybury College in Hertfordshire in the 1930’s. He then spent time in Mexico as an agricultural student. At the outbreak of World War II he was farming with his uncle at Upton Wold, Blockley, Gloucestershire. 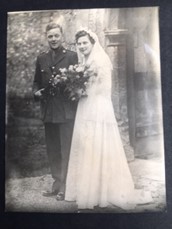 It was while serving in 10th Battalion that Bill became very good friends with Anthony Jackson. After his marriage, Bill and Patricia moved to Northern Ireland and all three became close friends. However, eventually the novelty of Ulster wore off and a degree of boredom crept in with well trained and motivated soldiers wanting to do something constructive for the war effort. Thus, when the decision was made to create a parachute force and the call came out for volunteers, many in the Worcesters applied. Bill Temple was one of those volunteers. One wonders whether there was a degree of Regimental pressure brought to bear because of the role of (then) Maj Gen “Windy” Gale who was to command the Airborne Division at D Day.

Patricia’s own career in the war is interesting. Aged only 20, she was a Red Cross volunteer in 1939 and deployed to the Cambridge Military Hospital, Aldershot, initially. (We do not know where and when she first met Bill, but it could have been then when he was at the OCTU). She then moved to Guys’ Hospital and was a nurse during the Blitz. She eventually qualified as a radiographer.

On 6th June 1944 Bill parachuted into Drop Zone Ranville to relieve the glider born coup de main. By 03:25 hrs A and B Companies were heavily involved in fending off enemy counter attacks. William was badly wounded and evacuated to England but died of his wounds on 16th June 1944 at St Mary’s Hospital Portsmouth. This letter was written by his widow on 29th November 1944:

"Bill was in the first stick to drop over Caen on the evening of June 5th. From the little he told me, the wind carried them off course and they landed slap in the centre of the Hun. He was hit at once, in the stomach, but managed to keep going for the house, dodging Jerry and getting his men on their way to the rendezvous. Then he got to a farm, he was picked up there by the RAMC [Royal Army Medical Corps] the next day, when they operated. He reached England on 11th evening and I got to him on the morning of next day. I didn’t think he had much chance, but the doctors were hopeful and he rallied wonderfully, but had a sudden relapse about 3 a.m. on the morning of 16th vomited blood and died in about five minutes. I couldn’t believe it possible at first and was so dreadfully lonely, I didn’t care what happened"

He is buried at St Peter and St Pauls Church, Checkendon, Oxfordshire.

Bill’s death was particularly hard for Patricia because she was pregnant when he died. Their daughter, Charmian Mary Temple, was born on 24th October 1944 and never met her Father.

News of his death would not reach his best friend, Anthony, for a while. He had been posted to the  7th Battalion the Worcestershire Regiment in India. On arrival at the Deolali Transit Camp he was asked if he would like to volunteer for Special Duties. He replied, "Yes" and was posted to 1st Battalion The Lancashire Fusiliers as a Battle Casualty Replacement; they were Chindits. After jungle training he deployed on the second Chindit expedition but after two months, like many Chindits, he succumbed to serious health challenges of fighting in the jungle and spent 10 days being casevac’d with malaria, jaundice and dysentery simultaneously. As part of his convalescence he was sent to Kashmir (height 15,000 feet).

As he was behind Japanese Lines the news of the Bill's death did not reach him until he was back in India and recovering from his own illnesses. He immediately wrote to Patricia, the young widow of his best friend, and the two sustained a long distance exchange of correspondence over the next 18 months as he recovered, was promoted and eventually became a Lieutenant Colonel commanding 1st Battalion, Lancashire Fusiliers.

He returned to England in June 1946 and married Patricia Temple (nee Britton) in December 1946.  Patricia and Antony had a decided military family as most of their children and grandchildren have served, or are connected to, the armed forces.

Unfortunately, Anthony suffered bouts of “jungle fever” for the rest of his life and died of his second heart attack aged 48, thus making Patricia a widow for the second time. She always felt that his heart never recovered from the strains of diseases and altitude to which it was subjected in 1944.