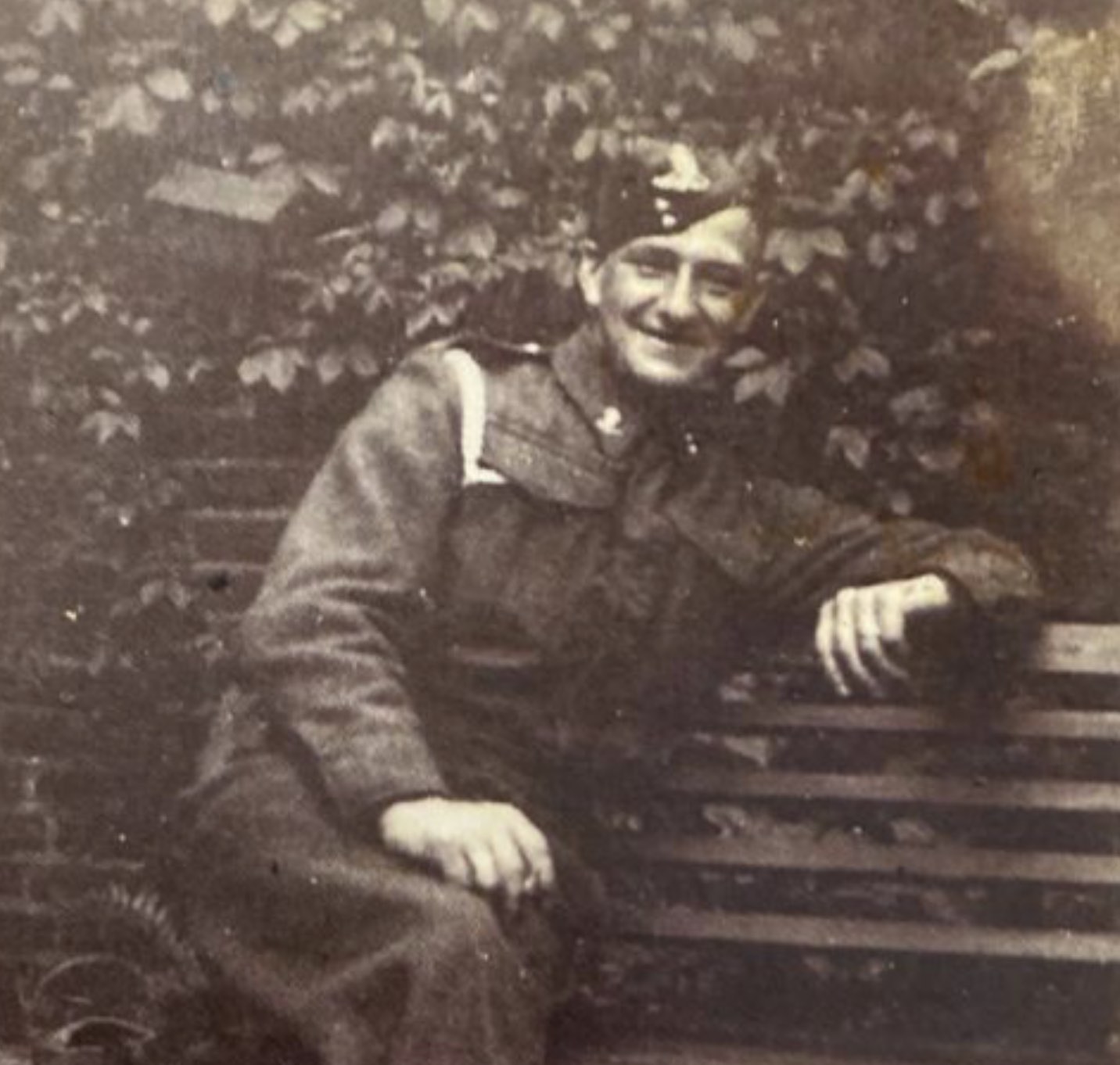 The story and photographs are shared by the Trust with kind permission from Thomas' son, Tom Warby Clitherow and family. Tom was only 15 months old at the time of his father's death.  This story also references John Ernest Craig Sinclair.

I was born at University College Hospital in London during a period of heavy bombing. Life as a baby involved a lot of time spent deep beneath Angel Underground Station, which was one of my family’s air raid shelters.
I understand I was about 12 months old when my father last held me before returning in April 1944 to his Regiment presumably to prepare for the D-Day Landings.

My father was involved in heavy fighting off the D-Day beaches before landing and taking part in the liberation of Ranville village where he was eventually buried with military honours. He was involved throughout the successful liberation of Caen but unfortunately lost his life on 27 July 1944 when taking part in an intensive battle with the German frontline at Herouvillette, during the Battle of Normandy.

Due to the intense bombing in London, we had only just temporarily relocated to Leicester to live with relatives of my Dad when my Mum first received news about my Dad. She heard from her mother in London that a War Office telegram had arrived, advising her that my father was missing. We returned to London and Mum soon learned that Dad had been killed.

Later in 1944, my Mum received the letter below explaining how my father lost his life. My mother, family and myself have always appreciated the care and sensitivity of the letter from Dad’s Commanding Major, and hope that he and all Dad’s comrades survived and returned home safely to the UK.

The family felt his loss very deeply and continue to do so, but we are proud that Dad and those comrades who will be remembered on the British Normandy Memorial, and all others who also made the ultimate sacrifice succeeded, and restored peace, democracy, freedom and liberty for all to protect going forward. 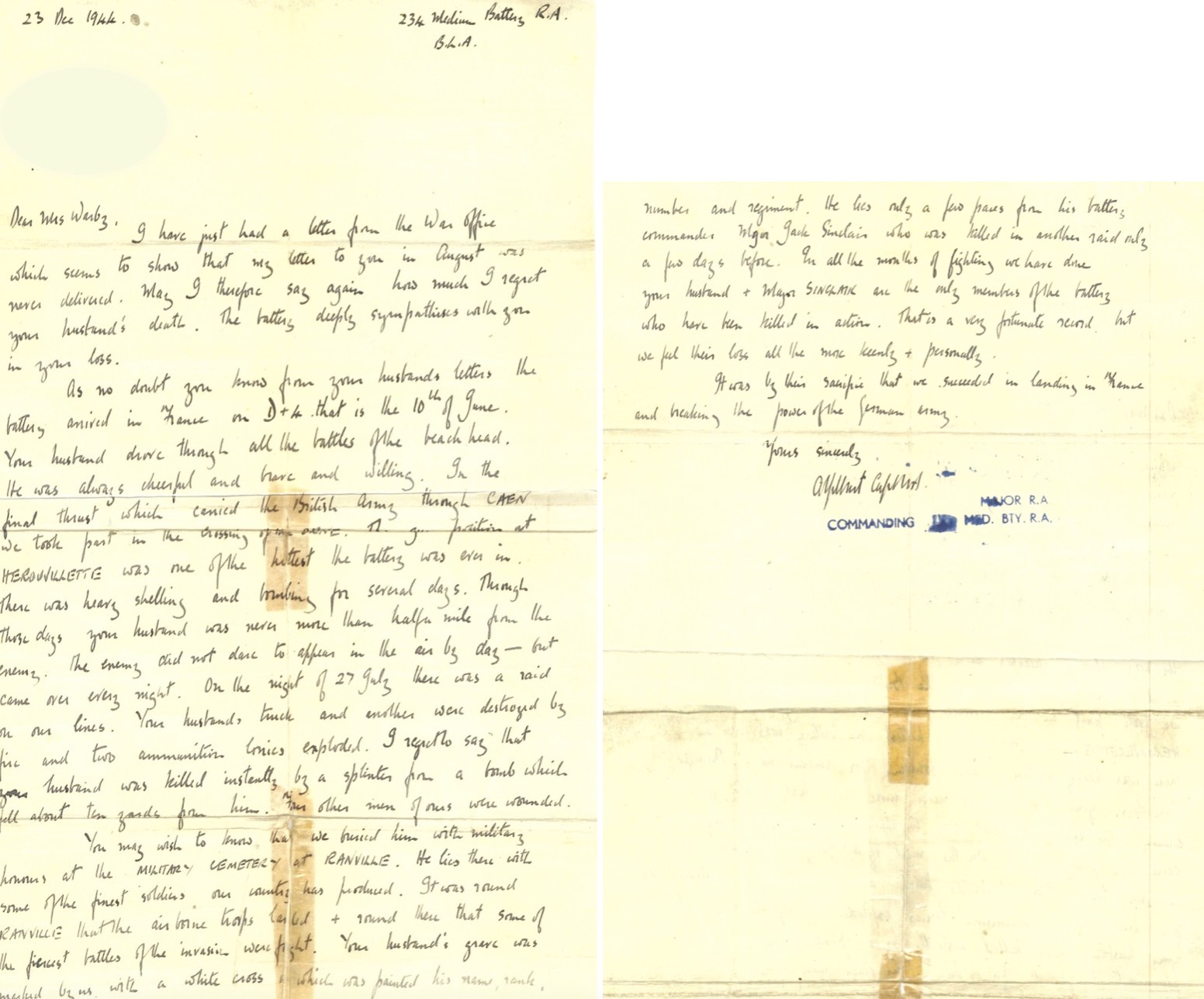 The letter is transcribed in full below:

I have just had a letter from the War Office which seems to show that my letter to you in August was never delivered. May I therefore say again how much I regret your husband’s death. The battery deeply sympathises with you in your loss.

As no doubt you know from your husband’s letters, the battery arrived in France on D+4, that is the 10th of June. Your husband drove through all the battles of the beach head.

He was always cheerful and brave and willing. In the final thrust which carried the British army through Caen we took part in the crossing of the Orne. The gun position at Herouvillette was one of the hottest the battery was ever in. There was heavy shelling and bombing for several days. Through these days your husband was never more than half a mile from the enemy. The enemy did not dare to appear in the air by day – but came over every night. On the night of 27 July there was a raid on our lines. Your husband’s truck and another were destroyed by fire and two ammunition lorries exploded. I regret to say that your husband was killed instantly by a splinter from a bomb which fell about ten yards from him. Four other men of ours were wounded.

You may wish to know that we buried him with military honours at the Military Cemetery at Ranville. He lies there with some of the finest soldiers our country has produced. It was around Ranville that the airborne troops landed and around there that some of the fiercest battles of the invasion were fought. Your husband’s grave was marked by us with a white cross on which was painted his name, rank, number and regiment. He lies only a few paces from his battery commander, Major Jack Sinclair who was killed in another raid only a few days before. In all the months of fighting we have done your husband and Major Sinclair are the only members of the battery who have been killed in action. That is a very fortunate record but we feel their loss all the more keenly and personally.

It was by their sacrifice that we succeeded in landing in France and breaking the power of the German army.

(Major John Ernest Craig Sinclair mentioned in the letter died on 18 July 1944 and is also remembered on the Memorial.) 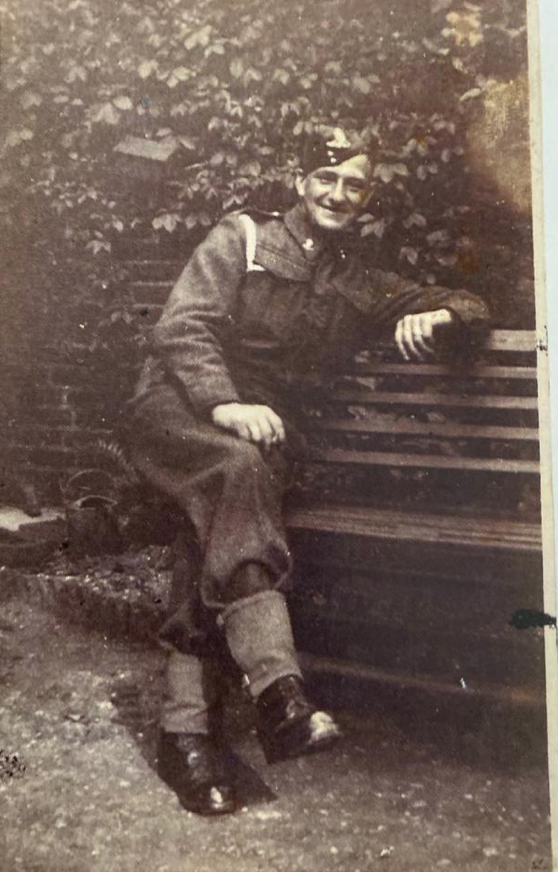 A picture of my father, sent to him by my mother, that was in his wallet when he was mortally wounded. It was returned to my mother with his wallet. You can see mortar damage in the top right hand corner of the picture. This was the last picture taken of Dad at our home in Islington, London. 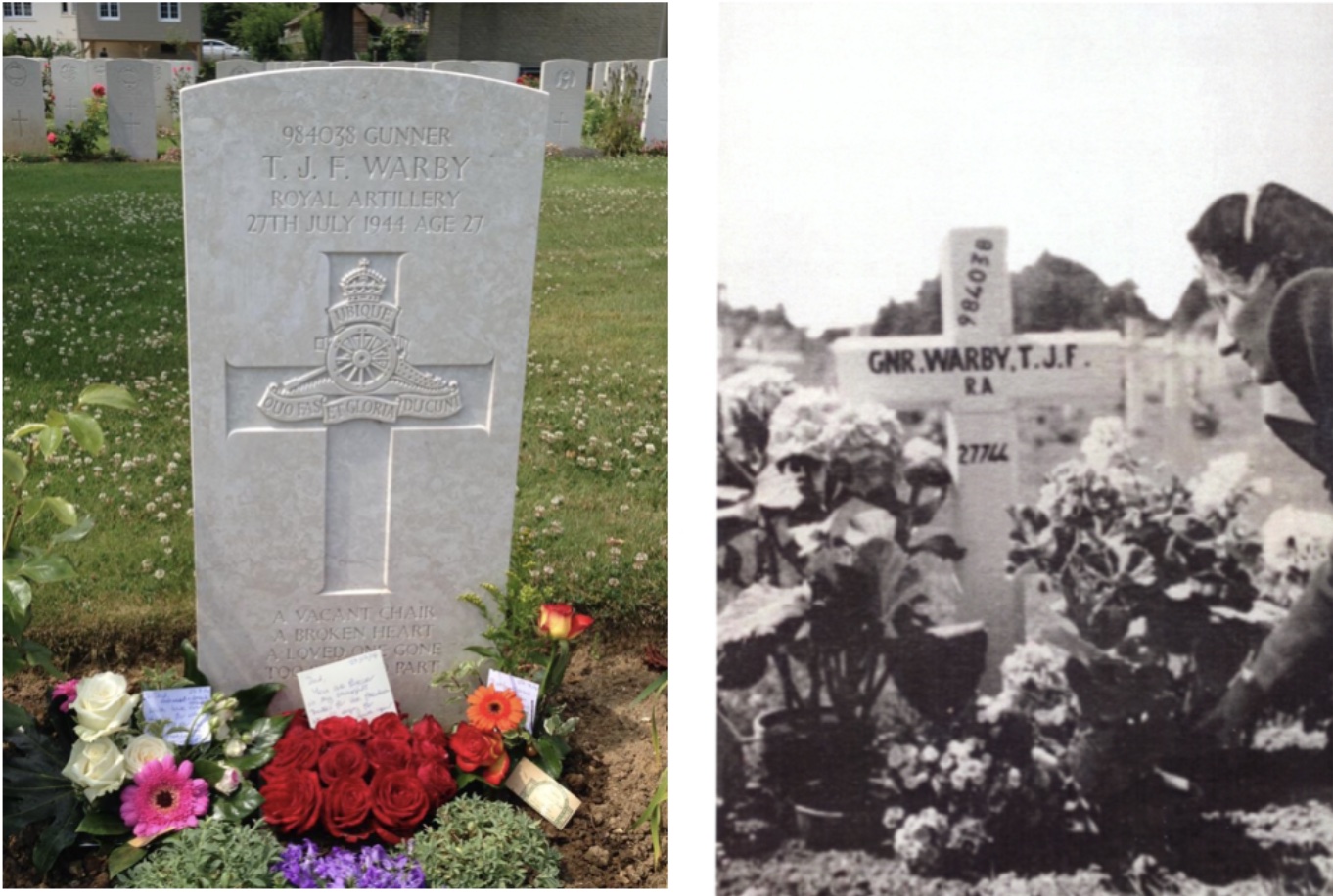 My father’s grave at the Military Cemetery at Ranville, taken during a family visit, and my mother Mary Warby’s first possible visit to the grave in 1948 along with her sister Rosie, kindly arranged by The Royal British Legion. 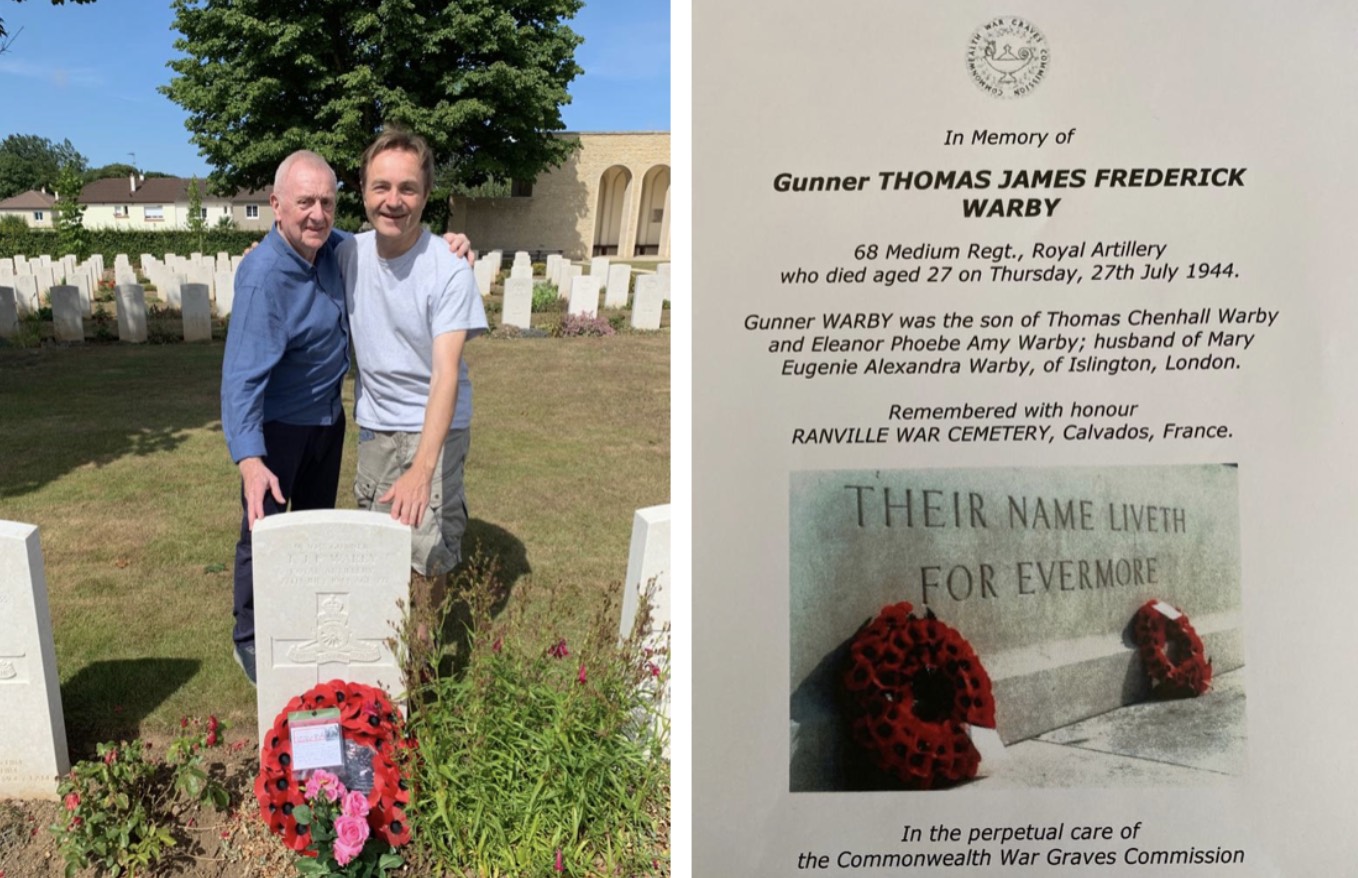 At my father’s grave with William on the 75th anniversary of his death on 27 July 2019. William lives close to Ranville cemetery and we have become good friends over the many years of visiting. William and his family kindly care for my Dad’s place of rest. On the right is my father’s ‘in memory’ page from the Commonwealth War Graves Commission. 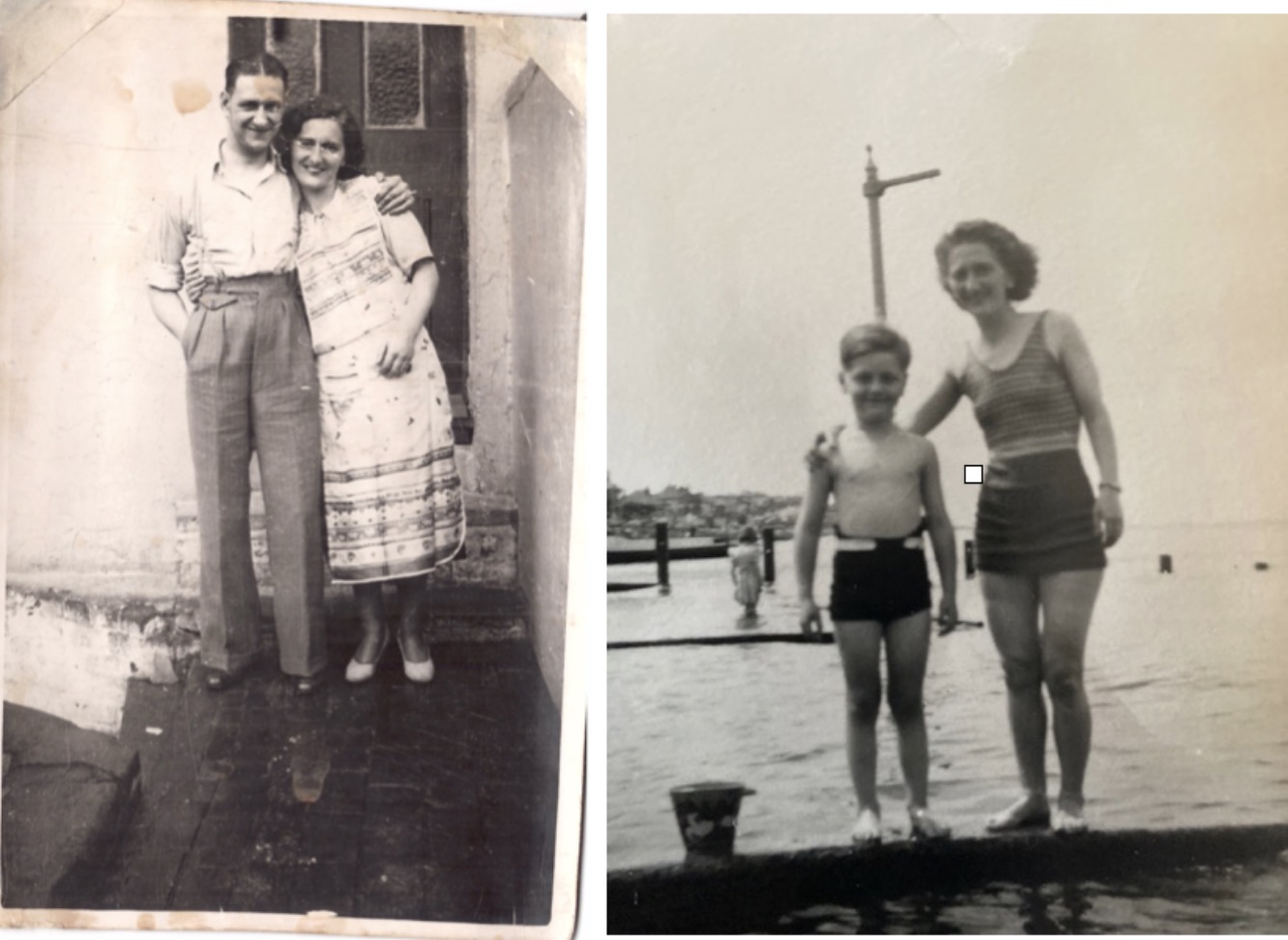