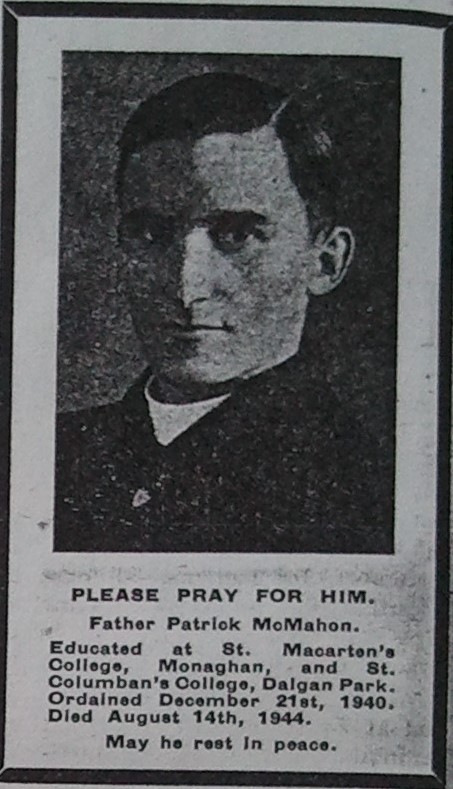 This story and photos are shared by the Trust with kind permission from Richard Burke, PhD  candidate, University of Roehampton, on the Irish Catholic priests who served in the Royal Army Chaplains' Department

On completion of his secondary schooling, McMahon chose to join the Society of St. Columban - a Roman Catholic Missionary Society founded in Ireland in 1916 - with the intention of becoming a missionary priest in China. However, following his ordination to the priesthood on 21 December 1940 he was unable to take up his assignment to China because of severe wartime disruption and travel restrictions.

Instead he responded to an appeal by the Army chaplaincy authorities for clergy of all denominations to enlist as emergency-commissioned chaplains for the war’s duration. McMahon was one of 20 priest-members of St. Columban’s Missionary Society to respond to this appeal during the course of the war, 19 of whom served as chaplains in the British army and 1 in the RAF. Father McMahon was officially commissioned at British Army H.Q. in Northern Ireland (at Lisburn, near Belfast) on 29 December 1941.

His first assignments were a number of short term attachments to various units located in South Eastern Command and then Northern Ireland. As plans for the Normandy invasion developed chaplains were assigned to a specific unit, took part with them in all their pre-invasion manoeuvres and training exercises, and accompanied them on the invasion fleet. On 25 November 1943, Father McMahon was assigned to 9 Royal Tank Regiment, Headquarters, 31 Tank Brigade. The Brigade embarked for Normandy on 18 June 1944. McMahon was killed-in-action near Falaise, on 14 August 1944.

The circumstances surrounding the death of Father McMahon are recorded in the official report and a number of surviving letters, written at the time of his death or very shortly thereafter. All agree on the essentials, each adding some tone of either personal appreciation or details of a religious nature.

According to the official report, written from H.Q., 31 Tank Brigade, 9 Royal Tank Regiment, Father McMahon was: "Reported killed on 14th Aug. 1944. In a letter from Brigade H.Q., it was stated that "Father McMahon was killed in action whilst attempting the rescue of wounded personnel during the First Canadian Army attack on Falaise. A solemn requiem Mass was offered for the repose of his soul by the Rt. Rev. Mgr. J. P. Stapleton, S.C.F., (R.C.) 21 Army Group in the Convent Chapel at S. Vigor le Grand, Bayeux. 48 Chaplains were present at this Mass to pay tribute to the courage of their colleague."

Father G. W. Lake, (S.J.) C.F., the immediate successor to Father McMahon in the Brigade, added: "…The Brigadier, Colonel, officers and men had nothing but immense praise for him. The boys loved him for the way he ‘mucked in’ with them, helping to cook their meals, playing football with them and generally being a great support to the Medical Officer with whom he stayed. He was always in the front line; he was never out of it. He was killed returning after collecting a wounded Canadian. Three went out in a half-track (a kind of armoured ambulance). The driver was slightly wounded when the 88 mm shell hit the half-track. Fr. McMahon, seated next to him, was killed; so was the stretcher-bearer sitting behind him. The Canadian also was killed … All this happened on Monday afternoon about 4.45pm on August 14th. He had said Mass that morning. He was buried on the 16th …  Trooper J. S. Maguire – Fr. McMahon’s Catholic Batsman - said he considered Fr. McMahon a saint without the slightest shadow of a doubt."

Rev. Preston, C.F., of the same Brigade as Father McMahon, wrote: Fr. P. met his death returning after going out to collect a wounded Canadian. The vehicle they were in was hit and three were killed, only one escaping. His body was recovered next day and was buried in the consecrated ground of the churchyard at Ussy, Calvados, the last rites being read by a French-Canadian priest. An oak cross and a heap of flowers marked the grave. Just the day before, he had been mentioned in despatches for his heroism. 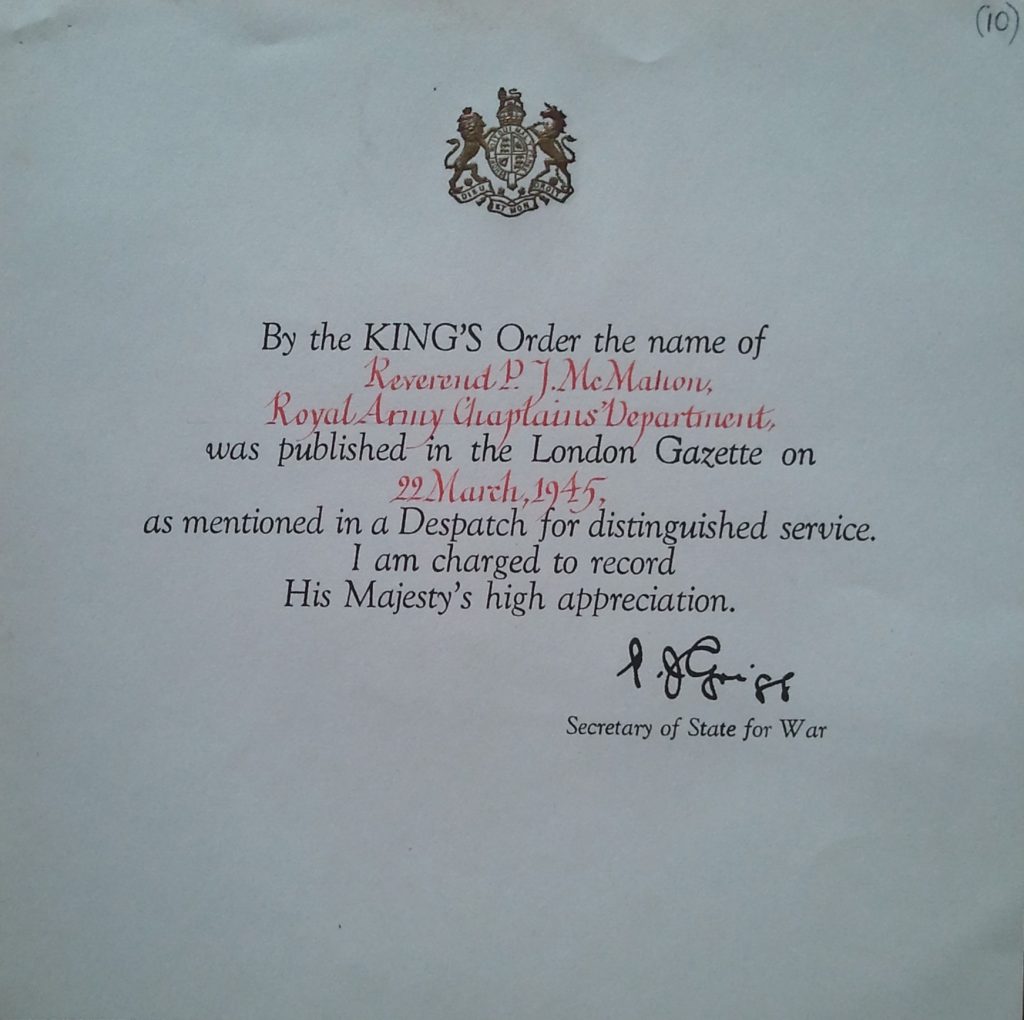 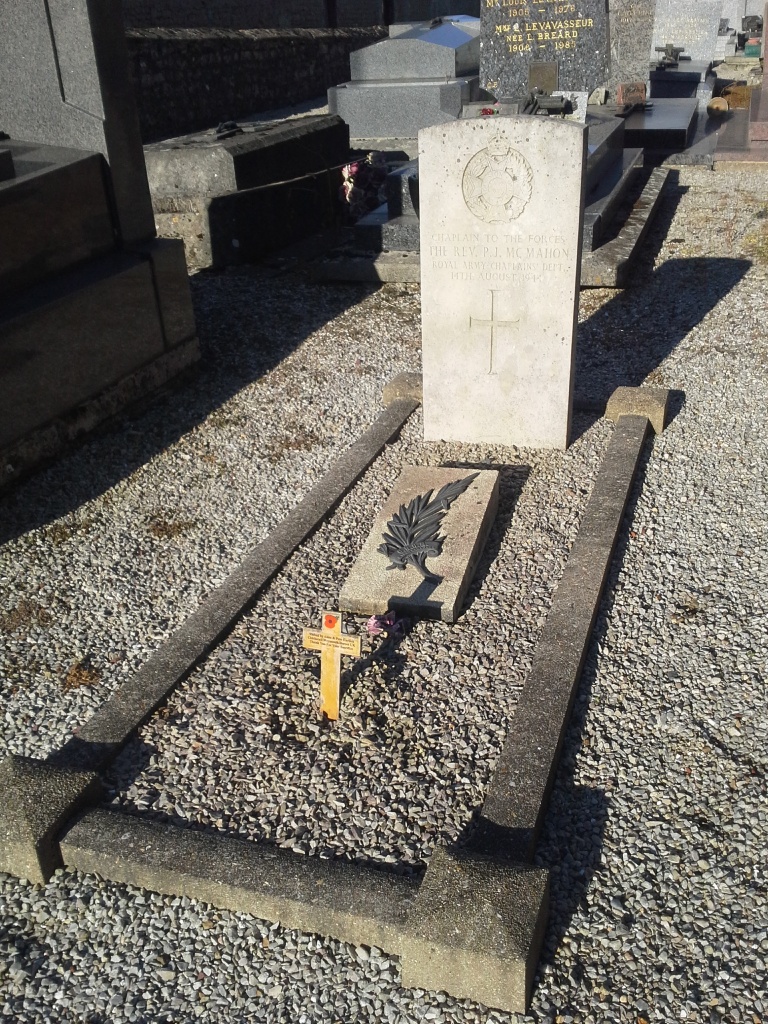 The Rev. McMahon’s is the sole Commonwealth War Graves Commission grave in the churchyard at Ussy Church, Calvados. It is located approximately 10 metres south-west of the church tower.

An enclosure from a Pte. T. H. Craig to his wife is perhaps especially revealing for its personal sincerity, coming as it does from an enlisted Northern Irish, non-Catholic soldier. Having no address to which it could be forwarded, Pte Craig’s wife approached the local Catholic priest in Banbridge, Co. Down, who in turn forwarded the enclosure on 6 Dec. 1944 to Father McMahon’s religious superior at St Columban’s Missionary Society.  Pte. Craig wrote:

"The Rev. Father McMahon was killed at a place in France called Quesnay and he is buried about four mile (sic) from Falaise in a Catholic graveyard; he was buried by this unit. He was killed when his vehicle was hit by a German 88 mm shell. He was going out to help a wounded Canadian soldier. He died with his crucifix in one hand and his prayer book in the other with his head resting on both as he must have been praying when he died. The Rev. Father McMahon was the life of this Battalion as he had a word for everyone it didn’t matter what his Religion and I can safely say he was one of the bravest men I have ever met. He didn’t know what danger was and everyone was sorry when he died. Everybody lost a friend when they lost Father McMahon. I had the pleasure to soldier with him when he was with the Irish Fusiliers in Ireland, and when I was transferred to this unit he was one of the first that I met. So I feel quite justified in what I say about him. He was one of my best friends although we were of different religions."

His testimonial reads almost like an oration and could serve as a fitting Regimental graveside tribute.