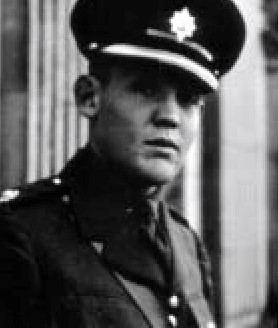 This story and photo are shared by the Trust with kind permission from Chris Sparrow, teacher at Summer Fields School, Oxford

I am not a relative, but I am a teacher who remembers the Old Boys of our school who have fallen in action. I take regular trips to Normandy with the pupils to pay our respects to the six Old Boys whose names appear on the British Normandy Memorial. They are:

Richmond Thackeray was born in 1914 and came to Summer Fields in the Lent Term 1923. He left in 1925 and went to Stowe. He was attached to the 1st Battalion of the Hampshire Regiment and was killed on 6th June 1944 – D-Day, as they attacked Jig Green sector, Gold Beach. He is buried in Bayeux War Cemetery. Aged 30, he left a wife, Jean, who lived in Cuckfield, Sussex.

Gilbert Talbot was born 31st August 1921 the son of The Right Revd. Neville Stuart Talbot, D.D., M.C., the co-founder of the ‘Toc H’ movement. His mother, Cecil Mary, died giving birth to Gilbert. Toc H was a rest home for soldiers set up in the town of Poperinge near Ypres in the Great War. It was open to all ranks and proved to be a haven of peace. Neville Talbot and ‘Tubby’ Clayton had named it Talbot House in honour of Gilbert Talbot (Neville’s brother) who had been killed in action in 1915.

Gilbert came to Summer Fields in January 1933. He then went to Winchester College where he was also a Prefect, and Sergeant-Major in the O.T.C [Officers' Training Corps]. He gained a scholarship in Modern History at Trinity College, Oxford in 1939. At the outbreak of war, however, he deferred his studies and signed up.

He served with the Rifle Brigade (as his father and uncle had) in the Middle East in 1941 and was twice wounded.  He then became A.D.C. [Aide-de-Camp] to Sir Maitland Wilson. In 1943 he re-joined his battalion in Italy. In 1944 they were recalled for the D-Day landings and he was to die at Bayeux on June 20th. He was 22, having seen considerable service, and is buried in Bayeux Eastern Cemetery. The Rifle Brigade Roll of Honour stated, "As a companion he was without rival and was always prepared to make the best of any situation. He inspired confidence amongst his seniors and juniors alike and in every way maintained the tradition of the Regiment."

His father must have been devastated at the outbreak of the Second World War and the prospect of his son giving his life as his brother had in the Great War. Perhaps mercifully Neville Talbot died in 1943, a year before his son.

Robert Bickersteth was born in 1908 the son of Robert Alexander Bickersteth and Ellen Constance Bickersteth. He came to the school in 1917 and went on to Eton in 1922. A keen sportsman, he did football, rugby and athletics. He then went to Trinity College, Cambridge in 1927 and gained an M.A.

Bickersteth then became a schoolmaster and, in 1935, a partner in Winton House School. At the outbreak of war he signed up and was commissioned into the 7th Battalion, Seaforth Highlanders. He died in Normandy on 26th June 1944 and is buried at St. Manvieu War Cemetery, Cheux. He was 36 and left a wife, Penelope Bickersteth (née Waterfield), of Kirkby Lonsdale, Westmorland.

The next two Old Summerfieldians to die would do so as the Allies pushed out from Bayeux.

Mark Howard was born in 1918, the oldest of three brothers and came to Summer Fields in 1927. He played for all the 1st teams in 1930 before going on to Eton. From there he went up to Trinity College, Cambridge in 1936. He served in the Coldstream Guards and saw action in all the major theatres of war where they served.

He died of wounds received as a result of German shell-fire on 2nd  July 1944, aged 26. Howard is buried in Bayeux War Cemetery, with Richmond Thackeray. The youngest of the three Howard brothers, Christopher, would be killed in action just three months later when his Lancaster was shot down over Germany. The middle brother, George, served in the Green Howards and was severely wounded in Burma, but survived to inherit the family home of Castle Howard in Yorkshire.

Sidney Cuthbert was born in 1914, the son of Captain James Cuthbert D.S.O. and Kathleen Cuthbert of Chelmsford, Essex. His father was killed in  action in France, at Loos, on 27th September 1915, when Sidney was just one. He came to the school in May 1923 and went on to Eton. He was commissioned into the 3rd Battalion, Scots Guards and was killed in action on 30th July 1944. He was 30 and is buried in Hottot-Les-Bagues War Cemetery.

Cuthbert died when his tank was hit at point blank range by a German Panther tank mounted with an 88 mm gun. The blast penetrated the heaviest frontal armour and blew the turret, in which Cuthbert was, clear off. The battalion history lamented his passing: "The loss of Major Cuthbert was an especially heavy blow; he had been one of the chief innovators in the realm of infantry and tank co-operation, and his energy knew no bounds."

His older brother had died in 1940 whilst serving in the Royal Air Force and is buried in northern France. Thus, over a period of 30 years, Kathleen Cuthbert had seen her husband and both sons killed in fighting in northern Europe.

Lord Edward Fitzmaurice was born on 28th  July 1922 the youngest son of Lt. Col Henry Petty-FitzMaurice D.S.O., 6th Marquess of Lansdowne and the Marchioness of Lansdowne. He came to the school in September 1931. Fitzmaurice went on to Eton and was then commissioned into the Irish Guards.

He was killed in action in France on 11th  August 1944. He was 22 and is buried in Tilly-sur-Seulles War Cemetery. The Regimental History reports on the action in which he was killed; "To cut a tragic story short, the moment the leading companies crossed the crest of the ridge they came under devastating fire, the ground being scythed by the Spandaus [German machine guns] and ceaselessly crumped by heavy German artillery. Snipers picked off anyone who showed signs of commanding. Amongst others, they shot Lieutenant Lord Edward Fitzmaurice through the head." His older brother, Charles, would die just 9 days later in Italy.