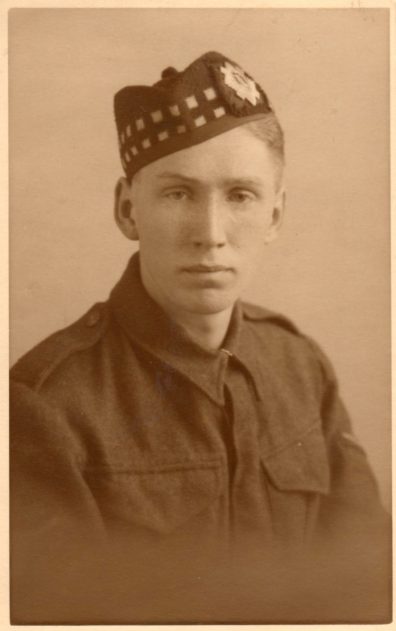 This story and photos are shared by the Trust with kind permission from Mrs Anne Harrison, niece of Robert Blyth

Lance Corporal Robert Blyth died of wounds on 19 July 1944 aged 21. He was my father's eldest brother, the uncle my siblings, cousins and I never knew.

Robert’s parents met and fell in love in a hospital ward in Winchester in 1918: Robert Oswald Blyth was recovering from influenza while with the Royal Garrison Artillery nearby, and Caroline Anna Reddie was a Voluntary Aid Detachment nurse. They married the following year and went on to have four children. Robert was born in Kilmacolm, Renfrewshire, on 8 November 1922: both his parents were Scots, and his father worked as an actuary in Glasgow. 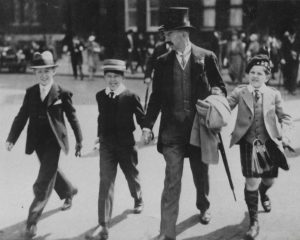 L-R Robert, John, their father Robert Oswald and Arthur taken as they arrived for a wedding at a Church of Scotland church in London, on 1 July 1936

After Robert's father retired as Assistant Manager at the head office of Scottish Amicable the family moved to Haslemere, Surrey. They built a large house with extensive grounds: Cuthil, now St Ives 1930 Prep School. All four children learnt musical instruments and they were encouraged to take an interest in the natural world. They also enjoyed educational activities at Haslemere Museum and attended the local church.

The boys attended Dean Close, a boarding school in Cheltenham. Robert was a Senior Prefect briefly before leaving school in 1941. After some months with the Home Guard in Haslemere he was called up to serve in the Royal Scots Regiment, and later in the 1st Battalion, King’s Own Scottish Borderers.

Robert’s parents were attending the 1943 Remembrance Day ceremonies in Cheltenham when his mother was taken ill. In due course she was found to have a brain tumour. During her illness my father began his naval officer training. Sadly, she died on 19 March 1944 at the age of 55, and both Robert and my father, John, were given compassionate leave to attend her funeral a few days later, in St Bartholomew’s Church, Haslemere. Their younger brother, Arthur, was allowed home from Dean Close too. My father recalled, ‘We wore the uniforms of Lance-Corporal, King’s Own Scottish Borderers, and Ordinary Seaman, and this was to be our last meeting on earth.’

Robert’s battalion was among the first to cross to Normandy on D-Day. The family were great letter writers. On 27 June Robert wrote:

"Before leaving England we had to get rid of our Bank of England notes – not being allowed to take any out of the country – so I sent six for you to keep in a “green envelope” as I wasn’t able to register them at the last minute. Hence my question whether you received the letter of 7th. In it was also the Will Form that I had witnessed by the two persons. So if you have not received it someone must be the document and six pounds to the good – and I don’t know that there is much you can do about it – is there? [...] There still isn’t much one can say. One feels OK when it’s fine but when it rains “misery” is not the word."

He had started to smoke cigarettes, to my father’s sorrow. In a letter of 14 July he talks about his encounters with the French civilians:

"As regards your enquiries into how my French is getting on. It’s not too easy to understand the people in this area as they don’t talk at all as per grammar book and when they are excited they talk so fast that by the time they have said a sentence and you are mentally translating it they rush on again and say the same thing differently thinking you have not understood. So one has to hurriedly answer “yes” or “no” as the case may be to avoid having to translate several sentences all meaning the same thing! However a very few do their best at English and others just simply say the one word that counts and we get on O.K. by pointing and signs etc. Of course in the street one never gets further than “Bonjour M.” or “Bonsoir M – or Madame” as the case may be – as they say that every time you pass them."

My father was on home leave and Arthur had started his school holidays when dreadful news came through: Robert had been shot by a German sniper on 18 July while leading his section of the King’s Own Scottish Borderers near Troarn, outside Caen. He died of his wounds (rifle fire to his chest and abdomen) in a British field hospital about 25 km away the following day.

Robert’s grave is in the war cemetery at Douvres-la-Délivrande, beautifully cared for, along with those of four others from his battalion who died the same day. His death is also recorded on his mother’s headstone (he died exactly four months after her) in Brookwood Cemetery, near Woking. His father, though deeply grieved, found strength through his faith and was helped by letters such as the one from a fellow soldier and friend, Victor Campbell, about the exemplary way Robert had led his men. This is part of what he wrote:

"Robert came to my platoon with the first-line reinforcements during the second week in France, and came to my section before the advance to Troarn, thus I was in contact with him most of the time. Throughout the whole campaign, he was an inspiration to everyone with whom he was in contact by remaining cheerful under the most trying conditions. No-one ever knew his inmost feelings – not even myself – and his coolness and courage steadied many men when their nerves were on the point of breaking. During advances, he was always encouraging his men with cheery conversation when he himself must have been feeling the strain badly. He was a splendid soldier, and never once let the regiment down (...) Whatever he was told to do, he did it to the best of his ability, whether the task was unpleasant or not. If the men of the British Army were all soldiers like Robert, we should have an invincible fighting force. In this country, I was proud to have such a friend as Robert, and in France, it was a privilege and an honour to fight beside him".

Robert Blyth’s name is ‘remembered with honour’ in the Scottish National War Memorial in Edinburgh Castle, inscribed there in the World War Two Book of Remembrance belonging to the King’s Own Scottish Borderers. His nieces and nephews are proud that his death in France is now also commemorated on the British Normandy Memorial.

The battalion were deployed as part of Operation Goodwood which took place between 18-19 July 1944 with units of the British VIII Corps. The operation was planned to open up the country to the east of Caen which would then achieve a breakout from the bridgehead where Allied forces were being held up. Advances were made but they did not achieve the final objectives.