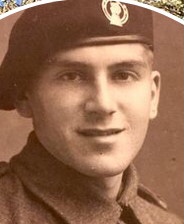 This story and photo is shared by the Trust courtesy of  Annie Ross, née Spence, based on the autobiography of her father, Canon John Edis Spence who served with Melvyn Stone.

The weeks before D-Day were days of great tension and excitement, with a certain degree of apprehension as to what fate would befall us when we crossed the channel. The days were spent firstly waterproofing the tanks, so that they could be launched into fairly deep water successfully from the Landing Ships Tank (LST).

Like all units of British Second Army in those last weeks the regiment was more or less sealed off from the outside world to maintain security and prevent any leaks about the date of the invasion. Apart from work, we were restricted to football matches among the squadrons and film shows at night.

The three regiments of 22nd Armoured Brigade sailed from Felixstowe in US Landing Craft Tanks, and the soft vehicles of the Brigade sailed from Tilbury. No-one who sailed down the channel will ever forget the sight of it. The passage was very cramped, the weather was unpleasant with frequent squalls, and the tank crews were feeling very seasick.

After lying well out to sea for some time we were eventually disembarked on the beaches. The scene there was one of intense activity, with Royal Navy Beachmasters trying to maintain a semblance of order. When 22nd Armoured Brigade was safely ashore it assembled in an area around Jerusalem, a small hamlet south of Bayeux.

The first battle in which the brigade was involved was close to Villers Bocage, where our sister regiment the 4th County of London Yeomanry which was in the lead suffered serious casualties and lost most of their regimental headquarters and a Squadron through the unexpected arrival of a Panzer division in the neighbourhood.

One of the hardest actions in the campaign was the battle around the city of Caen. After the initial 1000 bomber raid on the city by the RAF, all the soldiers of the three armoured divisions poised to attack thought it would be a walkover. However, despite the tremendous damage done to the city, it did not seem to have destroyed the German defences; they soon recovered from the shock and by the end of the first day there lay on the field of battle around Bourgébus Ridge the remains of 240 tanks, either burnt out or still blazing. Most of the casualties were inflicted on the 11th Armoured Division, and the battle, far from over, was to go on for many days.

It was during those following days of hard slog and constant shelling that my driver was killed. We came out from under the hole beneath the tank that we had dug for protection against the constant shelling to have a much-needed brew and a mug of tea. A shell suddenly landed, and he was killed instantly by a large fragment of shrapnel in his head, whilst I was blown by the force of the explosion back into the hole by the tank. His name was Melvyn Pearce Stone, who came from St Erth in Cornwall, and it was to his parents and girlfriend there that I wrote letters of sympathy after his death.

Many years later in the 1980s, during my ministry in Cornwall, when I was the County Chaplain for the British Legion, by pure chance, at a memorial service I met his family. His girlfriend of the day and sister-in-law still had the letters I had written to them in Normandy. A few weeks after this amazing meeting, I was taking a service at St Erth for the vicar, and much to the delight of the whole family we made it into a memorial service for Melvyn, which to them was a substitute for the funeral service they had never been able to have for him.

From the Church Times, 12 October 2012. Part of an obituary for the Reverend Canon John Edis Spence written by the Reverend Gorran Chapman:
The loss of Trooper Melvyn Stone strengthened in John the call to a vocation felt even before university; and it also inspired his lifelong enthusiasm as a member of the Royal Tank Regiment Association, and great affection for the spirit of comradeship among his tank crews.

He was involved in combat from Normandy to the end of the war on the German/Danish border north of Hamburg. He encountered the survivors of liberated concentration camps, which confirmed his belief that the war had been just.