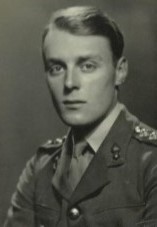 From an early age, Julian Cory-Wright had always shown great artistic flair. His favourite subjects were landscapes, harbours and boats. His only formal art training had been at Eton where he was taught by Wilfrid Blount. Julian’s holidays were spent at Brancaster on the north Norfolk coast where he painted and sketched and sailed his National 12ft, Sanderling. On leaving school, he returned to Eton for a short spell to teach Mathematics and then he enrolled as an articled clerk with Deloitte. In London he painted scenes on the Thames and, whilst on audits, managed quick sketches out of the window of clients. At the outbreak of war in September 1939 he mobilised with the Hertfordshire Yeomanry.

He joined the 177th Battery, 181st Field Regiment, 15th (Scottish) Division as a Gunner Officer in March 1942. During long training periods in Britain, Julian always had his paint box and sketch book close by him. He painted and sketched the beautiful landscape of remote parts of Britain whilst on exercise. He was also able to sketch the activities of troops in the field and his fellow officers in the mess.

By the end of April 1944, with the build-up of the troops in the South of England, Julian's regiment was at Worthing. On 11th June 1944, 181st Field Regiment set off towards Tilbury. Once there, the Commanding Officer allowed everybody except the sentries on duty outside the wire until about 23.00 hours. They then rested wherever they could until nearly midday on 12th June. During the afternoon, they drove to the Docks - streets were packed with guns and vehicles of all descriptions - nose to tail. The ship they were to embark on was the U. S. Liberty Ship Fort Biloxi.

First, all the vehicles were loaded, then the varied army units walked up the gangway. One unfortunate soldier was sketched by Julian in a letter home having slipped up the gangway owing to the weight of his kit and was unable to rise to his feet. There was a lot of waiting at Tilbury and it was here that Julian used both his watercolour sketch-book and his pencil to record the historic scenes. First the vehicles being loaded, men sitting on the deck and lying out in the sun; others in their tam o'shanters leaning on the rail looking out to sea and finally the convoy under way. 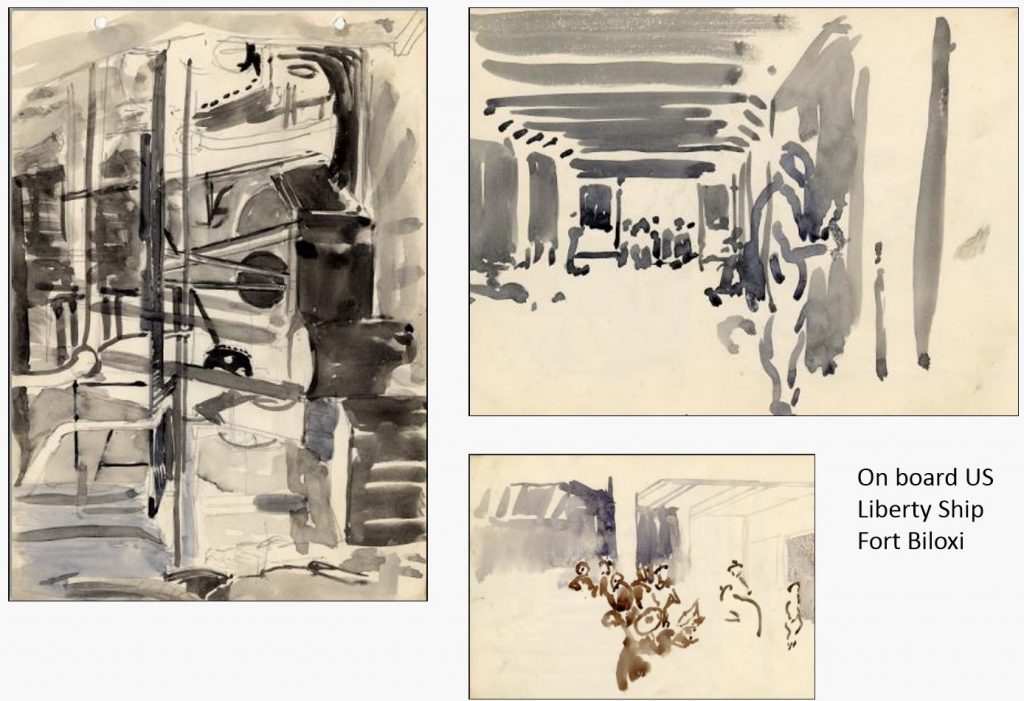 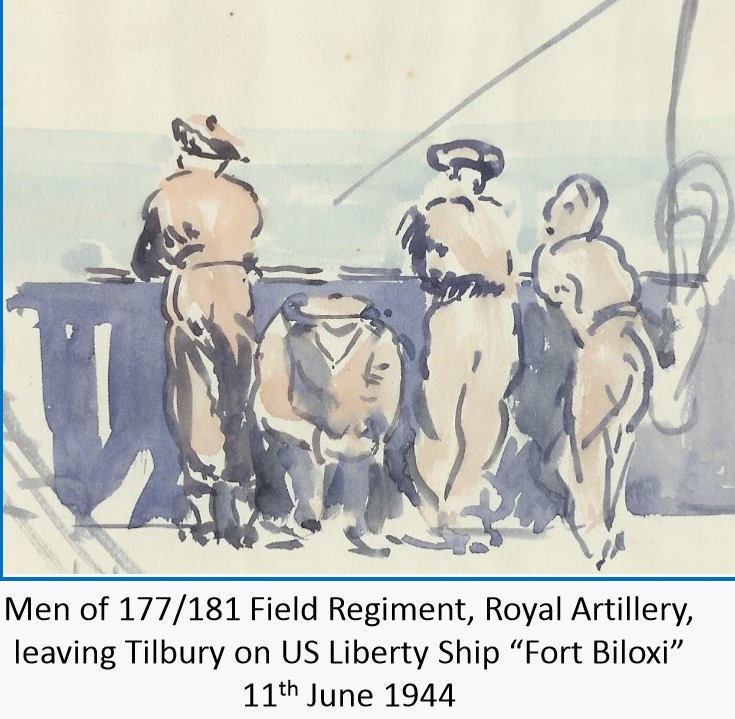 During the night of 12th/13th June they sailed down the Thames and during daylight on 13th June took their place in the long convoy. Tom Stokes of 177th Battery who was on board the Fort Biloxi with Julian recalls that there seemed to be hundreds of transports plying to and fro and he found it difficult to portray in words the majesty and latent power of those long lines of ships, sailing peacefully on a lovely June day in the English Channel. 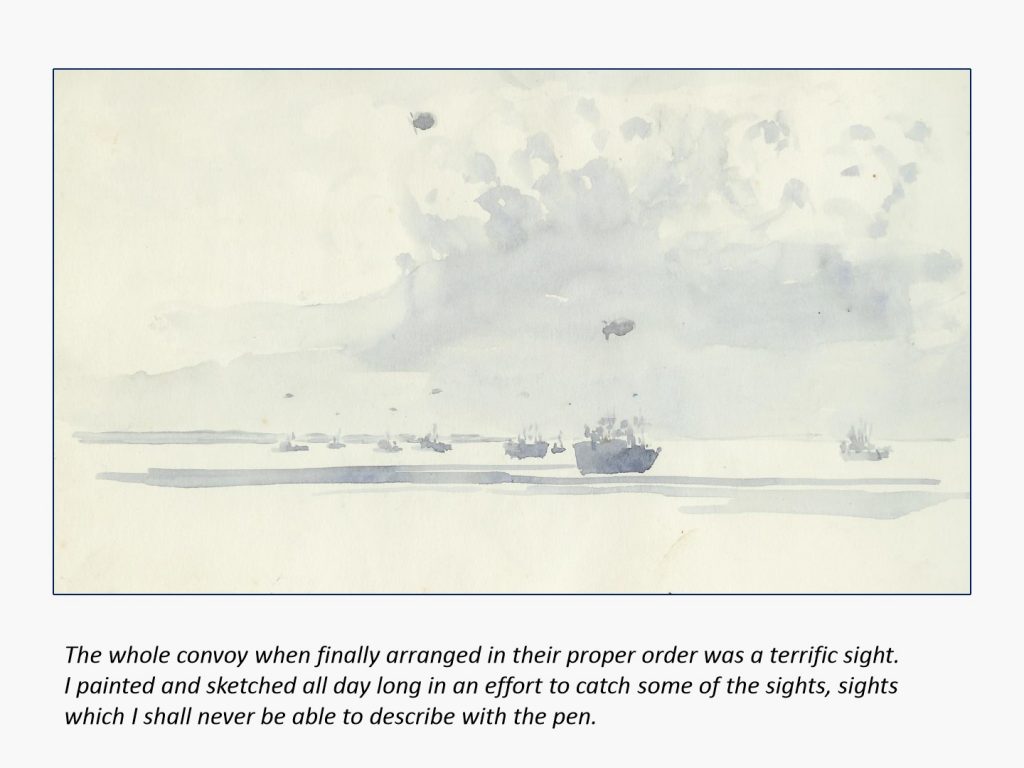 The French coast was sighted on the afternoon of 14th June and by evening the Liberty Ship Fort Biloxi was close enough to Arromanches for a Landing Ship Tank (LST) to come alongside. The wind was getting up and the sea rather choppy, but they quickly off-loaded "Able" Troop's four guns, limbers and towing quads, together with a Bren Gun Carrier, 14-cwt truck and Jeep and then the LST ploughed safely to the beach. Also on board was the reconnaissance party of the Commanding Officer, 2nd in Command, Signallers and other officers, including Julian, being "Baker" Troop commander. They had an easy landing and missed the coming storm at sea.

One officer of 181st Field Regiment who had arrived "on time" in France later told Tom Stokes that on 19th June he had had quite a nice meal at the "Lion d'Or" in Bayeux while others of the Regiment were still staggering about on the sloping deck of the Fort Biloxi. The LST did not return to the Fort Biloxi - the sea had become so rough, that it was impossible to unload any more equipment. There was little rain, but the storm became worse and worse and so the remainder of the company stayed on board Fort Biloxi until 22nd June.

According to Normandy folk it was the worst storm in living memory. By 21st June the storm had abated somewhat, so a Rhino Ferry came alongside the Fort Biloxi and much more equipment was unloaded onto it but the wind and sea were still so rough that the Rhino with vehicles and guns on it, including a dumper truck and concrete mixer were swept away. 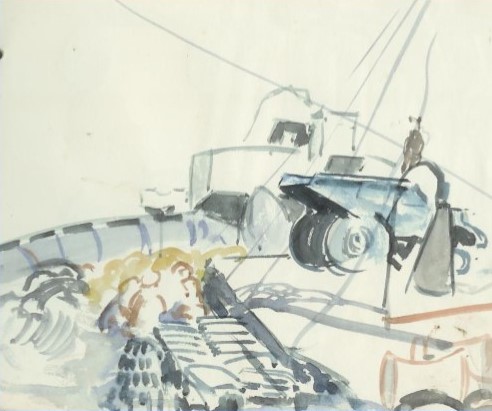 It was a grievous blow to Julian's Troop to lose their guns and equipment during the storm but when the sea became calmer an LST moored alongside and the troops and remaining vehicles were landed including, much to the surprise of the men, a steamroller. This was meant to make a reasonable track for vehicles and guns to get up the beach to the better roads but unfortunately it became bogged in the sand.

The Recce parties from 181st Regiment who had landed at Arromanches before the storm had been looking around the area just north of Mesnil-Patry and Norrey-en-Bessin and having joint meetings with the infantry, tank and anti-tank units prior to their first engagement in Normandy, as part of Operation Epsom. Operation "Epsom", part of the battle for Caen, was planned to start on 18th June, but on account of the weather, was postponed until 26th June.

Within two days the regiment were supplied with replacement guns for those which were swept away on the Rhino. The replacement guns arrived just in time to join in the opening barrages planned for 07.00 hours on 26th June. Julian would have helped to decide the positions of the guns of 177 Battery and had the more dangerous task of finding suitable observation posts to watch out for enemy movements. One that Julian and Major Archie Brown found was in a two-storey house near the church. Standing well back from an upper window, they could see towards their objective, St. Manvieu and it served as their Observation Post on the evening of 25 June.

As Forward Observation Officer, Julian would normally have been in a Bren Gun Carrier with his O.P. Ack [Observation Post Assistant], the Bren gunner and wireless operator, advancing with a company of the 6th Battalion, Royal Scots Fusiliers whom they were to support next day. However, Major Maurice Cooke of the 8th Battalion, Royal Scots recalls the evening of 25th June in his diary "I went down to Btn. HQ for a final conference and as we came away I met Cory-Wright, the gunner. I asked him jokingly whether he was going to paint next day as he had spent many a dull hour on exercises with his watercolours. He smiled his cheerful, friendly smile and said it depended. I also asked him how he was going to travel, in his bren-carrier? He replied, no, he would walk, two men could carry the 11-set while a third worked it, it would make less of a target". 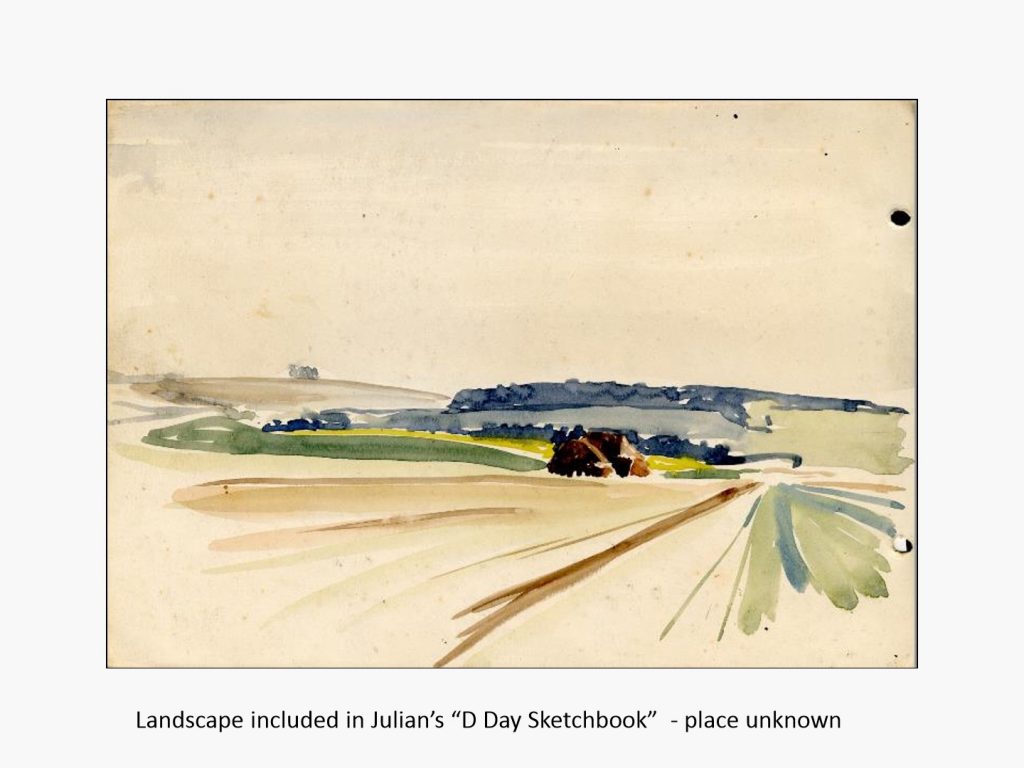 On the following morning, 26th June, Julian and his party began to move on foot towards St. Manvieu to their Observation Post position. Captain Jack Cunis was at the Command Post and he called Julian on the field telephone and asked how it was going at the front. “Pretty brisk” Julian replied, then the line went dead. A shell had landed near Julian’s party. Sergeant Signaller John Bramald, accompanying him on the mission recalled that, characteristically, Julian's only concern was for his men. "Are you all right?" he asked. To which Bramald was able to reply, "Yes, sir" before Julian lost consciousness and died.

Julian was initially buried beside the shell hole where he was killed and later moved to the British Cemetery at Tilly-sur-Seulles where he rests now.

In the Autumn of 1944 Julian's tin trunk with his personal possessions was returned from France containing among other things the books of sketches he made on the start of that historic voyage to Normandy. The dumper truck he sketched being loaded on board ship at Tilbury may never have made the coast of Normandy but his sketchbooks got there and back and contain records of historical importance. 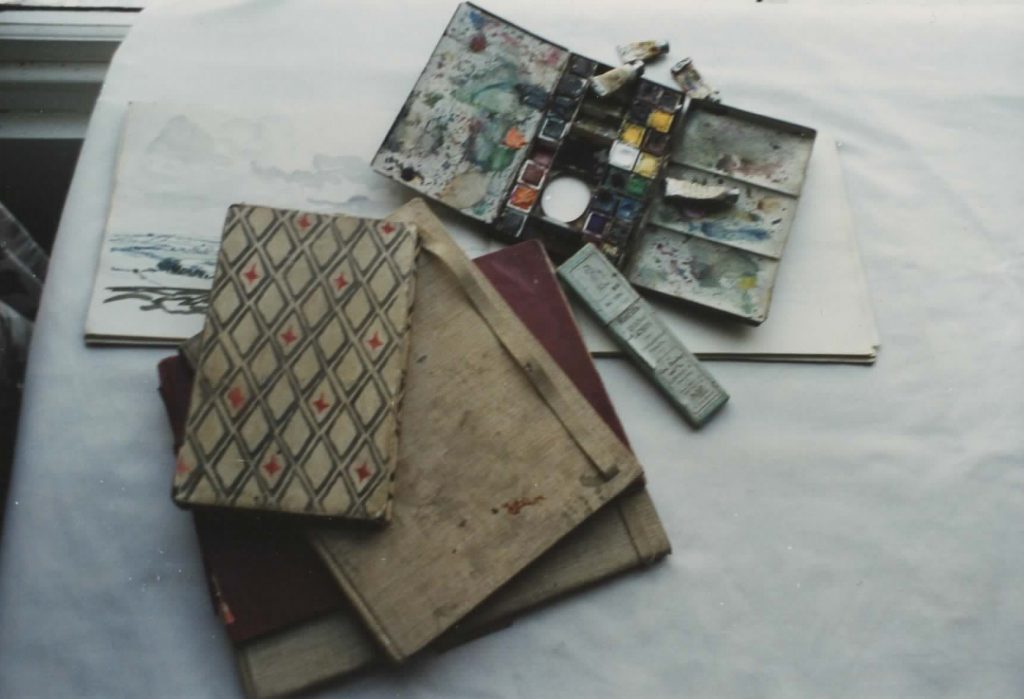 Julian’s name is commemorated in Norfolk on the Brancaster Village War Memorial, on a brass plaque in the church of St. Mary the Virgin and on the gates of the Royal West Norfolk Golf Club, where he spent so many happy days. He is also listed on the Knebworth War Memorial, Hertfordshire and on the Bronze WW2 War Memorial in the Colonnades at Eton College and on the stone plinth and bronze plaque at Sandroyd School, Wiltshire.

The Rhino Ferry was a barge used extensively in Normandy to transfer troops and heavy equipment from ship to shore. They were constructed using several pontoons which were joined together and were powered by outboard engines. This gave them a low draft so they could be used on shallow beaches.