The story of Joseph Casson is told by Mary and John Holland. Mary is the niece of Joseph Casson and Robert Casson, two brothers who lost their lives in Normandy. Robert died on D-Day while his brother Joseph was killed just a few weeks later on 27 June 1944.

At the bottom of this page you will find a video, narrated by Mary, sharing further information about her Uncle.

Joseph Casson (14674155) was deemed to have been a man enlisted in the Territorial Army for the duration of the Emergency under the provisions of the National Services Acts 1939 to 1941 and was working at the Ladysmith Coal Mine, Whitehaven, Cumberland, (Cumbria) when he was formally enlisted on 18 November 1943.

Following his basic training he was initially assigned to the Kings Own Yorkshire Light Infantry (KOYLI) on 30 December 1943, eventually being transferred to the 9th Battalion, Durham Light Infantry (D.L.I.) on 28 March 1944.

The 9th Battalion, D.L.I. moved to Nightingale Wood Camp, near Southampton, on 2 June 1944 prior to embarking landing craft on 5th June, sailing down the Solent at 8:00pm and reaching open water at 8:30pm as part of the 50th Division.
The 50th Division was designated to land on Gold Beach, in company with the 8th Armoured Brigade. The 151st Brigade, including the 9th Battalion D.L.I., was part of the second wave to land, after the beach was secure and push inland. The Brigade was to move southwest from Gold Beach toward Route Nationale 13. The 151st Brigade came ashore as planned and got to the outskirts of Bayeux.

During the following week, the Brigade advanced past Bayeux and on 14th June, the Brigade fought in Operation “Perch” against the Panzer Lehr Division. The Brigade made the initial assault on the villages of Lingèvres and Les Verrières, which were captured by the 9th Battalion D.L.I. Later that day the Brigade and the 231st Brigade were cut off south of the villages, formed a "brigade box" and repulsed heavy German counterattacks before withdrawing.

The 9th Battalion D.L.I. went on to enter Tilly-sur-Seulles on 20 June, Joseph is recorded as being wounded on 21st June, moved to No 3 CCS (Casualty Clearing Station) near Jérusalem but died from his wounds on 27 June 1944. Following a request to the authorities from his mother, Mrs Mary Ellen Casson, he was exhumed and transferred from Jérusalem War Cemetery, Chouain to Ryes War Cemetery, Bazenville, on 13th November 1944, to finally be laid to rest and lies in Plot 4, Row B, Grave 1, alongside his brother, Royal Marine Commando, Robert Casson of HQ, 4th Special Service Brigade. 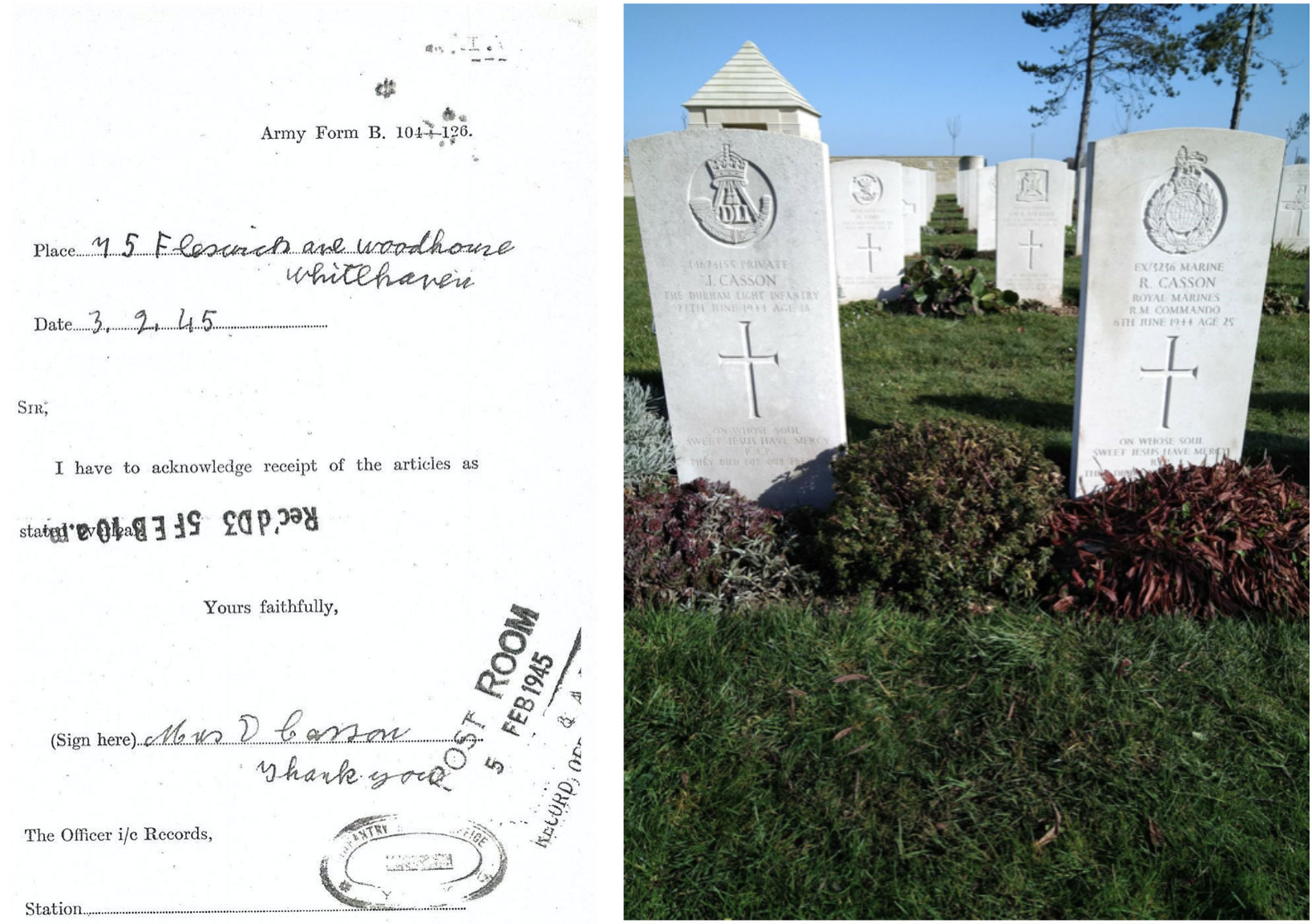 In acknowledgement of the return of his personal effects, Joseph’s mother, Mrs Mary Ellen Casson, despite her grief, even took the time to add “Thank You” to the document.