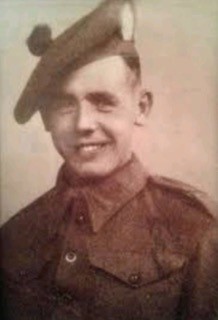 The information and photograph are shared by the Trust with kind permission from Paddy McPhilemy, nephew of James McPhilemy.

James McPhilemy was born in Possilpark Glasgow to Matthew and Ellen McPhilemy. James was the second eldest sibling of what turned out to be 16 in total by 1941.

James left school at 15 to work for Yarrows Shipbuilders in Yoker, Glasgow as an apprentice metal sheet worker. He was proud to have signed up for the Kings Own Scottish Borderers and his brothers and sisters were so also proud of him whenever he was home on leave wearing his uniform.

Private James McPhilemy was killed in action 17th June 1944 during the fighting around Cambes-En-Plaine and he was laid to rest in Douvres-la-Délivrande Commonwealth War Graves Commission cemetery.