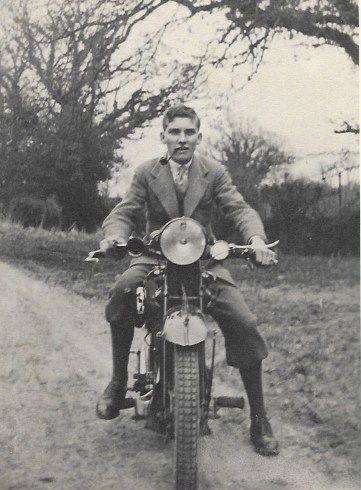 This story and photos are shared by the Trust with kind permission from Gordon Edington, Gordon's nephew.

Gordon Allan was born at his family home, 30 North Side, Streatham Common, London on 26 October 1912. He had two elder sisters, Muriel and Phyllis - my mother. 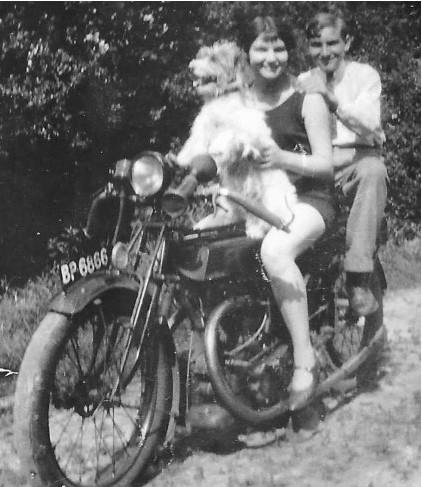 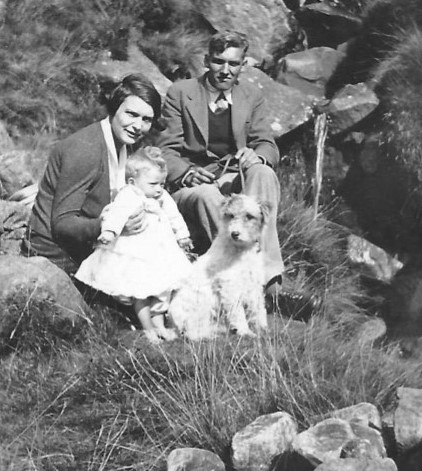 Muriel, Gordon and his niece Jill

In 1942 he sent a telegram to his father to say he had got married to Margaret Tucker. 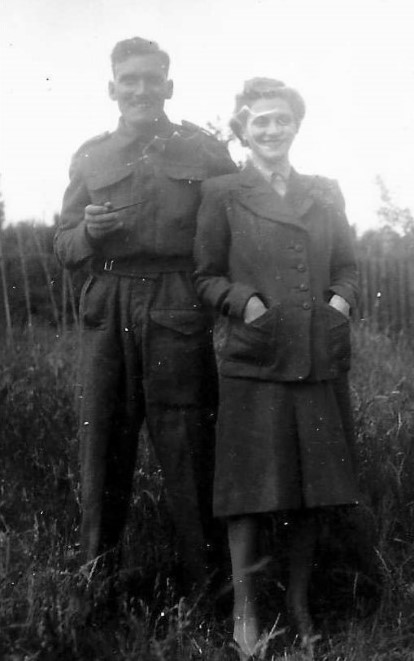 I was born a year after Gordon died but I have strong memories of my mother's feelings about the loss of her younger brother - she was devastated and the impact of her loss never left her. She was five years older than Gordon and her maternal feelings towards him had grown stronger after the death of their mother who died in 1941.  My mother always attributed her death to the after effects of a German bomb that destroyed a house close to her own in West Norwood although she was not physically injured by it.

Gordon joined up in November 1941, 18 months after his mother's death. He joined the 1st Battalion, Hampshire Regiment, 231st Infantry Brigade and fought in Sicily and Italy prior to landing in Normandy in 1944. The battalion landed on Jig Green, Gold Beach on D-Day, 6 June 1944 and advanced through Normandy.

Gordon wrote many letters home. In one dated 18 June 1944 to Jessie Edington, my paternal grandmother, he wrote:

"So many thanks for your grand letter; was more than glad to get home news, and that you are all well. Have little to tell you, as I expect you have read most of it in the papers. One thing I would like to tell you, I was never so seasick coming in, in all my life. Life at that time was not worth living; that is if you have been seasick.

Had a nice letter from Margaret and Phyllis at the same time as yours; please tell them not to worry, all will be OK. Bob, my pal, is OK, so that's a good thing.

Since being in France I have had some smashing cherries and strawberries; do so wish you had been with me to eat same. We are getting plenty of smokes and sweets; things in this line are as much the same as Sicily and Italy; only this trip (there) seems to be bags of soap about"

Gordon sent a letter to his sister, Phyllis and brother-in-law, George on 16 July in which he mentioned his time in hospital and that he was in a news article as a result of it. He also suggests his friend Bob had been wounded too.

"Many thanks for your letter which with the above B.W.E.F. [British Western Expeditionary Force] took only one day to reach me, but my mail from Margaret am not getting; can't understand it at all, when I do hear she tells me she has already heard the news from you, and getting no mail from me; what ever you do, keep B.W.E.F. and pass same on.

Miss Bob more than I can say; the lucky devil is at home as far as I can tell. Ask Margaret to write to his wife and find out for me will you, and please tell Margaret I m writing every day whatever I am doing or where I am. Also I am getting so little mail from her.

Do hope George has had time to get M.O.I. P.R. [Ministry of Information Public Relations] branch, Malet St. and asked for the July 6th Northern Daily Sketch; a picture in the middle of same you will find me, but only feet. And the picture is called "an Hospital in an Abby (sic)" taken while I was in same. Please send one to Margaret also will you." 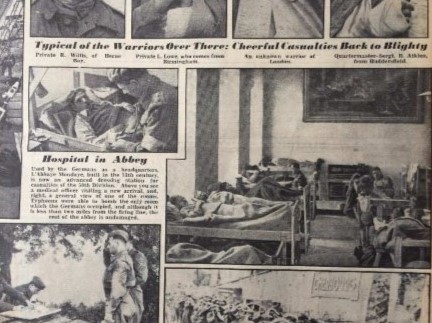 The hospital he refers to had been established in the Abbey Saint-Martin de Mondaye near Bayeux. The nature of Gordon's wound is unknown but it appears not to have been serious as he was soon back with the regiment on 11 July.

In what we believe was his last letter home to Phyllis and her husband, George, dated 09 August he talks about the morale-boosting presence of the NAAFI: "Must say have had a smashing rest and feel so much better for it; we have everything one can think of, even plenty of beer and real live English N.A.A.F.I. girls."

On 11 August the battalion was involved in 231st Brigade's attack to force its way towards Conde. Their first objective was St-Pierre-La-Vielle and the high ground to the west. They encountered strong German resistance and became pinned down just short of their objective. At around 19:00 they launched a further attack in an attempt to move forward but encountered very heavy shell fire and sustained a number of casualties, one of whom was Gordon.

Phyllis asked a friend of theirs in the Coldstream Guards if he could help them to establish the details about Gordon's death. He received a letter dated 20 September from Lt Col Turner who wrote: "On August 11th, during the attack on the village of St Pierre, Pte. Allan was sent back from his platoon to Company Headquarters with a message. He had just reported to the Company Commander when a shell struck a tree and burst above them. Pte. Allen was killed instantaneously and his Company Commander was mortally wounded." 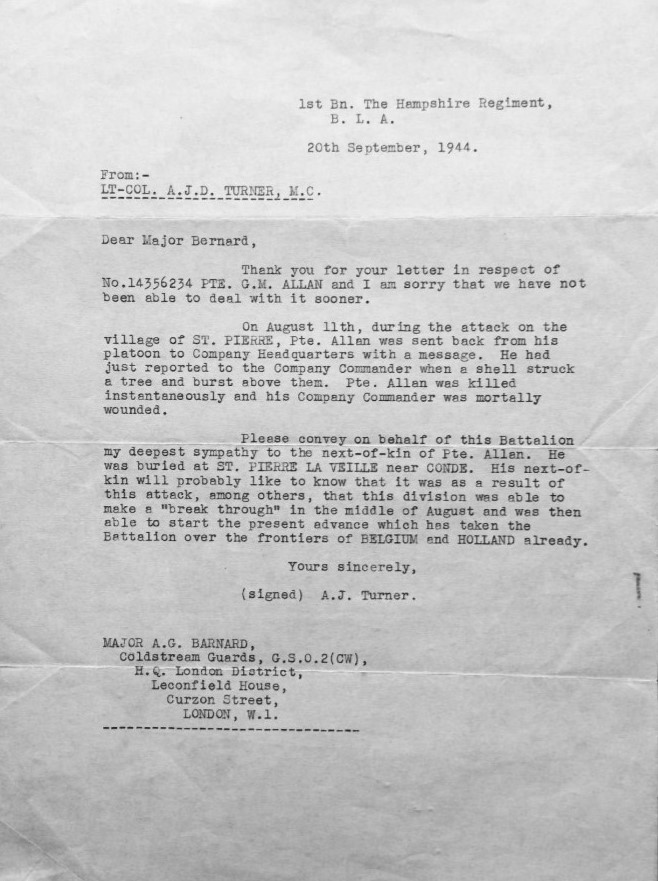 As we explored Gordon's history we discovered there was more to his marriage to Margaret than we realised. We could not find a marriage certificate. We found she was named as the sole legatee for Gordon's estate but that document confirmed Gordon was in fact not married to her. It turned out she was already married but for unknown reasons had not yet asked for a divorce. So it seems that for appearances sake they pretended they were married. According to the wife of Margaret's son from her first marriage, Margaret always said that Gordon was the love of her life. And she asked that she be recorded as his wife on Gordon's CWGC headstone. It reads:

of my dear husband Gordon 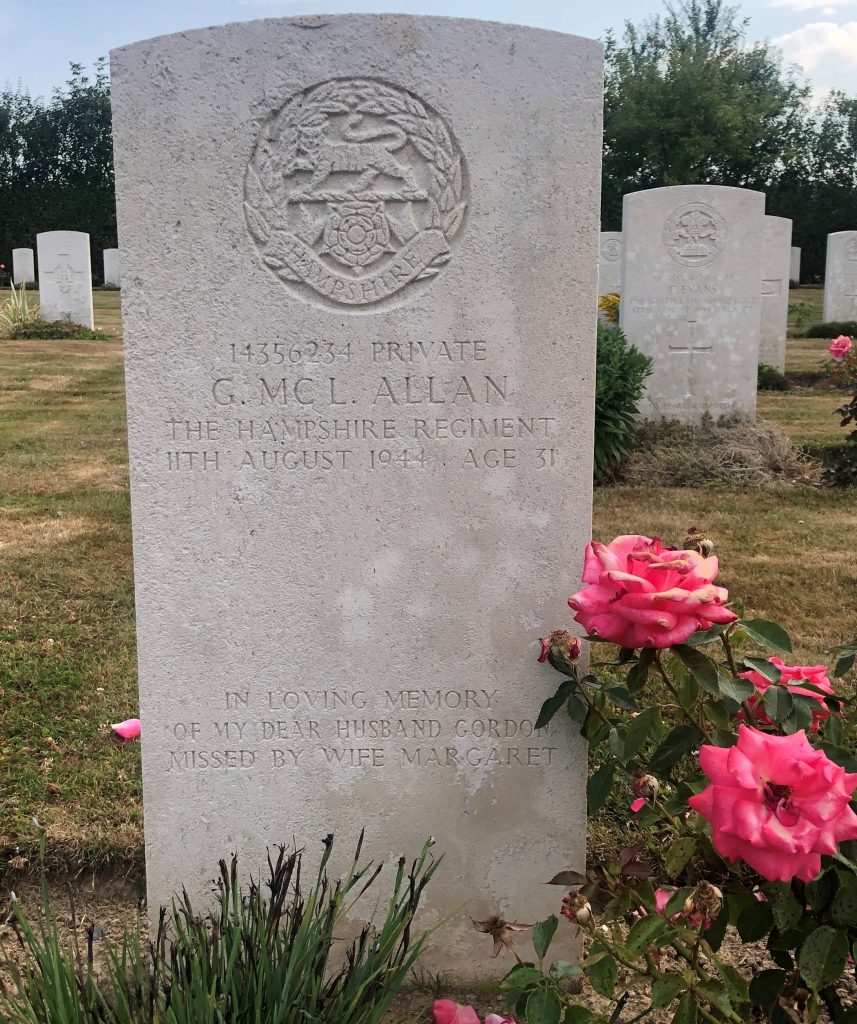 In May 2014 I tried to find the exact spot where Gordon was initially buried. According to the Commonwealth War Graves Commission burial records it was north-west of St-Pierre-La-Vielle. The grid reference led me to the end of a farm track by the farm at L'Anfrière which was about half a mile north-west of St Pierre.

Private Gordon Allen was permanently buried in St Charles de Percy War Cemetery, Plot 7, Row E, Grave 1 on 4th February 1947. I have researched and put together this record of my Uncle Gordon's life in personal appreciation of him having made the ultimate sacrifice. I hope this story will allow my grandchildren to understand the sacrifice that my uncle and countless others like him made. As I was born a year after Gordon died this has also been an opportunity for me to get to know him, just a little.