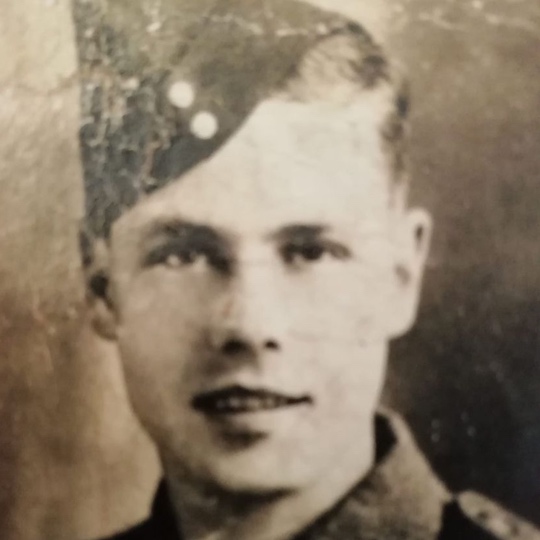 The story and photograph are shared by the Trust with kind permission from George's niece, Denise Powell.

Private George Leonard Johnson, 7th Battalion, Somerset Light Infantry, was the eldest son of George and Lily Johnson and was born and raised in Birmingham.

In the build up to D-Day, George was with the regiment in a camp near Battle, Sussex. On 14 June the marching troops then moved to a marshalling camp at Glyndebourne in preparation to move on to ships and on 16 June they were moved on again to Newhaven to join the ships. The battalion spent the next few days on and off the American Landing Craft Infantry during storms.

George went on to land at Courseulles-sur-Mer on 23 and 24 June. The weather settled and after moving to the assembly area, a peaceful night was spent under the apple trees on the road to Bayeux.

A tiring march along dusty roads followed over the next few days through the villages of Brécy and Rucqueville and as the battalion arrived at Saint-Manvieu-Norrey the battlefields became more apparent. Although trained and thought to know what to expect, the reality of burned buildings and fields of dead bodies, abandoned vehicles and dead cattle came as a shock.

The 7th Battalion marched during a very wet night to just outside Cheux in readiness to attack a low feature half a mile south known as Hill 100 during 27 and 28 June, before moving on to Le Haut de Mouen. From here, regular patrols were sent into Verson and Carpiquet. On 8 July, the whole battalion moved up and dug in around Verson, entering the rubble strewn street at night. During that night and the following night very heavy casualties were sustained under a withering shell fire until the battalion was relieved late on 9 July. Sadly, my Uncle George was killed in action, aged just 21, at Verson on 9 July.

He is buried in Bayeux War Cemetery and his family regularly visit, ensuring his memory is kept alive. He is also remembered on the Pype Hayes Memorial Stone and Garden in Erdington, Birmingham.

In September 2021, we were finally able to see this beautiful Memorial in all its glory and pay tribute to Uncle George Leonard Johnson. It is such an emotional and tranquil place and everything about it is so fitting. We visited again in November for Remembrance and it is with great pride that it is now a regular stop off for us to just show our respects, reflect and feel the peace and tranquillity. 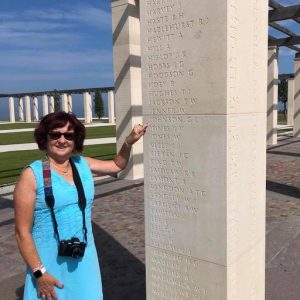 Denise stands next to the column one which George is named