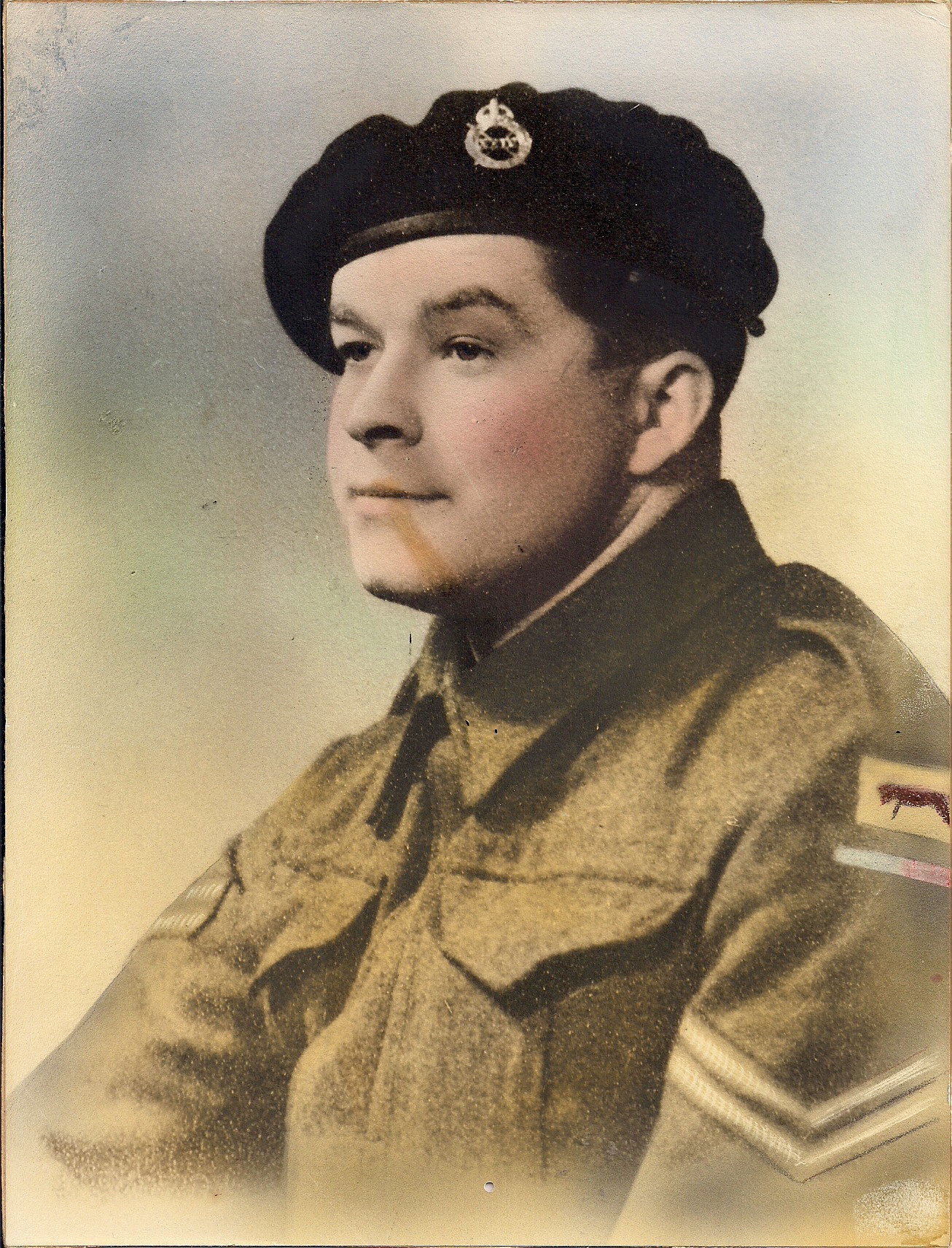 The story and photographs are shared by the Trust with kind permission from Anne Taylor, grand-daughter of George Taylor

George joined the army in 1937. Initially he was in the 9th Battalion, Queens Royal Lancers and spent time in France in the early part of the war as part of the British Expeditionary Force (BEF). He suffered an injury to his foot and was evacuated back to England before Dunkirk. At some point he was part of the 9th/12th Lancers and eventually they became the 24th Lancers when that regiment was created in December 1940. George spent the war learning tank warfare and training other members of the regiment in readiness for what was to become D-Day. We have a photo of George taken at some point when he was training but the location and date of the photo is unknown. We know they trained in Bridlington, Thetford and Kirkcudbright, Scotland. 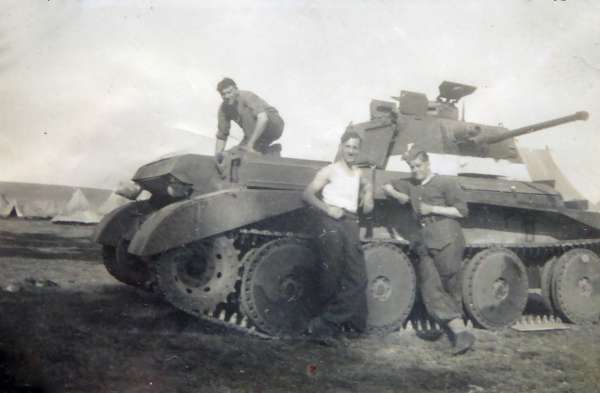 George Alfred Taylor to the right.

When George was home on leave in Cropthorne, Worcestershire in 1942 he met Irene Mary Beaumont. She worked for Morgan Crucible Munitions Factory in Worcester, Worcestershire during the war. All we know about her job was it involved pressing out carbon washers. My nanna didn't even know exactly what they were part of. She worked different shifts as it was a 24/7 operation and we know at times she was a Supervisor at the factory. 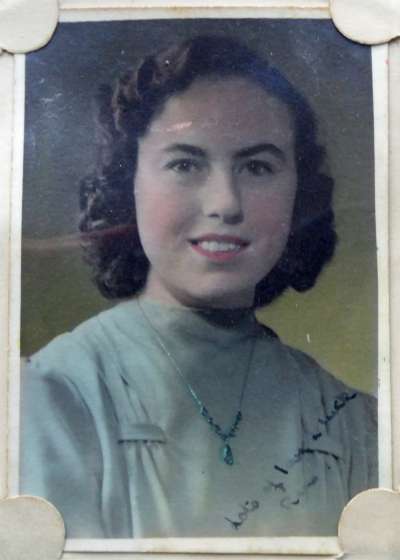 They became engaged late 1943, and had their engagement party on the 29th January 1944. George managed to secure leave and they married on the 22nd April 1944 in Cropthorne Church. 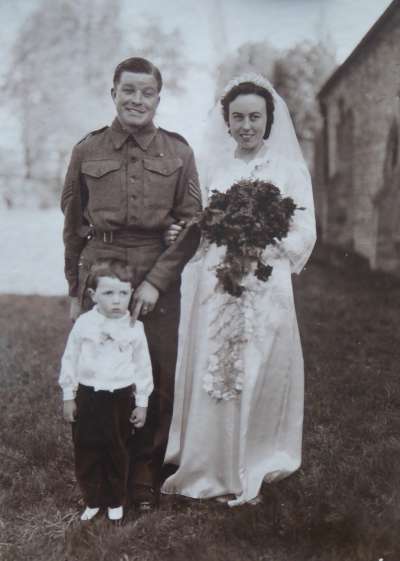 George and Mary on their wedding day with their page boy, my nanna’s half brother, Tony Beaumont.

On the 27th April 1944 he returned to his regiment. From the letters in our possession, we know that he learnt in late May, that he was going to be a Dad. The last letter from George to my Nanna is dated 5th June 1944 and we now know that was written whilst on a Landing Craft moored off Southampton. 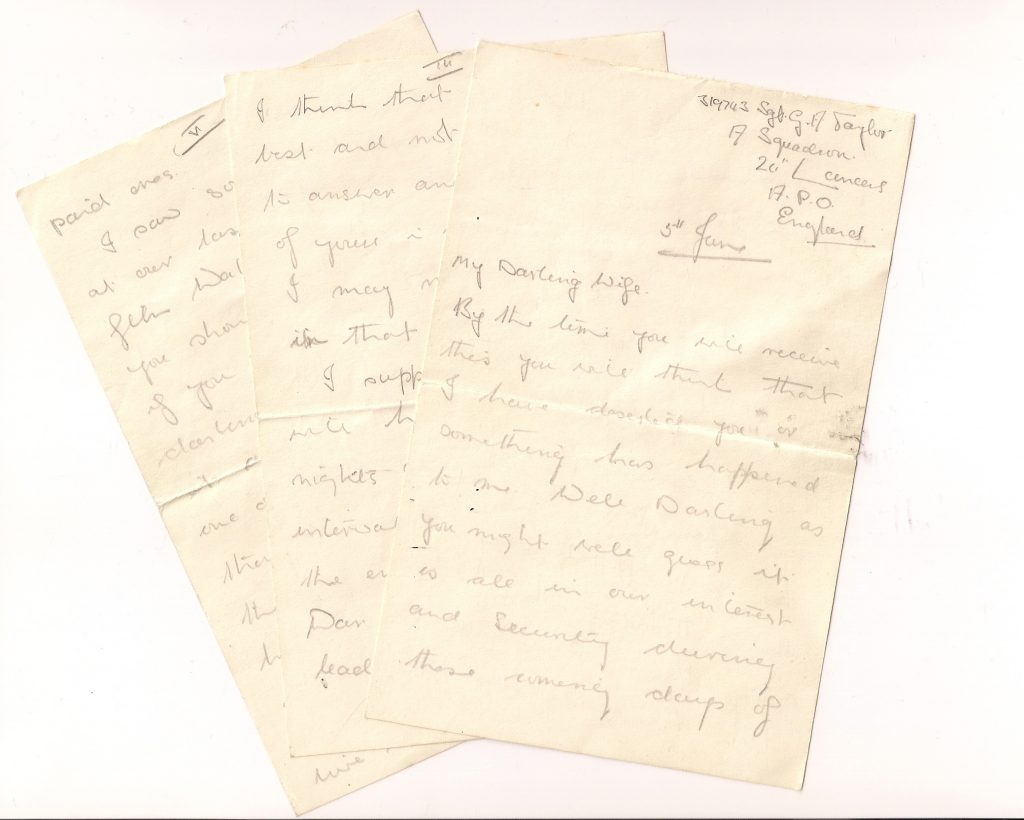 By the time you will received this you will think that I have deserted you or something has happened to me. Well, Darling as you might well guess it is all in our interest and security during the coming days of the operation. As I told you sometime ago it would happen. It is the same for me, I am not receiving any of your mail yet, but hope to any day.

I think the best thing I can do is to write when I can and as often and then post them at the first opportunity or the authorities which we may have to hand them to, will do it. I think that will be best and not to wait to answer any specific letter of yours in rotation, for I may not get them in that order.

I suppose by now you will have started on nights again after a brief interval on days. Roll on the end of this blinking war and we can all lead a normal life.

This coming “do” will shake Fritz a little and I hope we will shake him to such an extent that it will all be over in a month. Then after the job of demob, we shall all be home except for some who will have to stay on for the occupation of Germany. I hope it is some of those who have scrounged out of it with their reserved jobs and the well-paid ones.

I saw some time ago at our last Camp the film “Watch on the Rhine”. You should see that when you get the chance darling, it proves a lot, it also puts forward in one of Paul Luka’s speeches that a “man who have the greatest desire to live, has the greatest chance” and it goes on to say that he wanted so to live with his wife. Well that goes for me too and millions of others I suppose.

I have not found time to write to Doug yet but shall do so as soon as I can.

All for now, keep me informed.

Doug, who was Nanna's brother, saw service in the Royal Navy.

George landed as part of the second wave on the 7th June 1944 on Gold Beach, Jig sector. The following day whilst on reconnaissance, in the area of Audrieu on the road between Bayeux and Caen, the Regiment encountered unexpected enemy fire and came under attack. George was a Tank Commander and subsequently a target for snipers. He sustained a gun shot to the head and died instantly.

His crew removed some of his personal possessions, which were returned to my Nanna, and his body was removed from the tank.  The regiment had to engage enemy fire and then retreat. A few days later they returned and George's body was buried. At a later date his body was laid to rest in the Bayeux War Cemetery – Plot XIV.J.5, next to his Captain, Alick Poole, who was killed the day before. 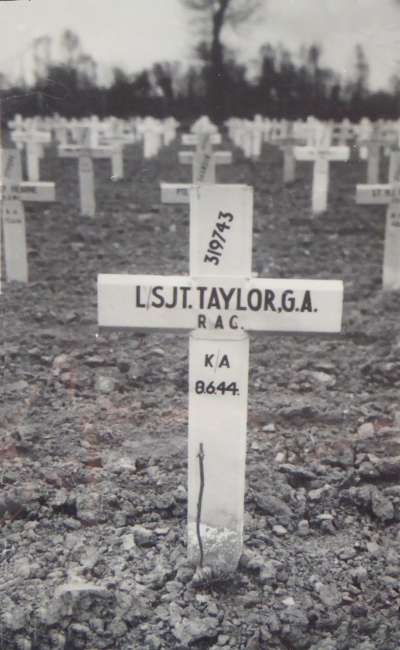 On the 16th June my Nanna celebrated her 21st Birthday. News reached her about George's death on 30th June 1944, although the official notification didn’t arrive until the 7th July. My Mum, Valerie Anne, was born on 11 January 1945. In 1953 my Nanna married again to Robert (Bob) Ponder and became Irene Mary Ponder. I grew up with a Grandad until he died in 1985. Between then and my Nanna’s death on 8th December 2011 we, as a family, visited George’s grave a few times. After her death we inherited George's letters written so long ago. So we have had the chance to ‘know’ him; learn the type of man he was, his dreams, hopes and plans for the future.

As a result of the WW2Talk online forum we also had the chance to speak to a member of his Tank Crew, Anthony (Tony) Hughes, who was with him when he died, and were able to piece together more information on what happened.

He went on to tell the 24Lancers Reunion Committee President, Dr Stephen Pannell, who passed on the information to me at a latter date after I asked, that "when George was shot, he slumped back into the tank - his body was removed shortly later - and Tony had to get past his body in order to take over control of the tank. This involved pushing the body out of his way. It was at that point that Tony realised that a large part of George's skull had been blown away (Tony also believes it was an 'explosive' bullet) exposing his brain, and that the turret - and Tony - were speckled with bits of George's brains and quite a lot of blood. I'm sorry to be so brutally honest but I know you will also recognise that, when people say that George 'died instantly' - don't they all (sadly most died in excruciating agony) - on this occasion it's actually the truth, the whole truth and nothing but the truth."

Also in the tank that day was Fred Bartlett, Driver and Peter Hancock, Gunner. Tony Hughes was the Radio Operator. He was injured in another battle and sustained serious burns. All George's tank crew survived the war. From the Commonwealth War Graves Commission website it would appear that George was initially buried in Loucelles. It always troubled us on why his body was left if it had fallen inside the tank. The reason was that the tank was full of ammunition and there was simply no room. He was also the first death they had experienced.

We are lucky enough to have all his letters, condolence letters from some of the Regiment, the official notification, photos and even his service and pay book. 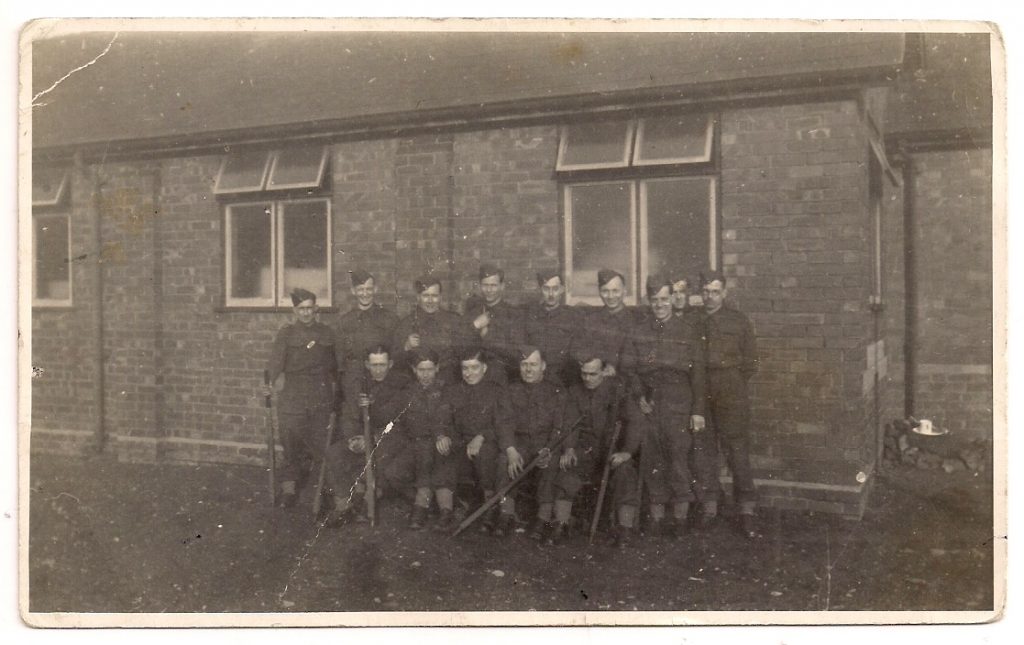 The photo above recently came to light amongst my Mum's possessions she inherited from my Nanna. It's a photo of the 24Lancers Drill Squad. After I posted this on the 24L Facebook page the 'owners' of the site responded saying this could be the earliest photo that exists of the Regiment. On the reverse of the photo in George's handwriting is "Cannock February 1941, 28/3/4?" his name and Drill Squad'. They know the Regiment was formed at Cannock in December 1940/January 1941.

My mum and I are so proud of her Father, my Grandfather and are so pleased to know that this lasting memorial to him and all those others that made the ultimate sacrifice is to be completed in their honour. It's so important that those brave men and women are not forgotten. Thank you 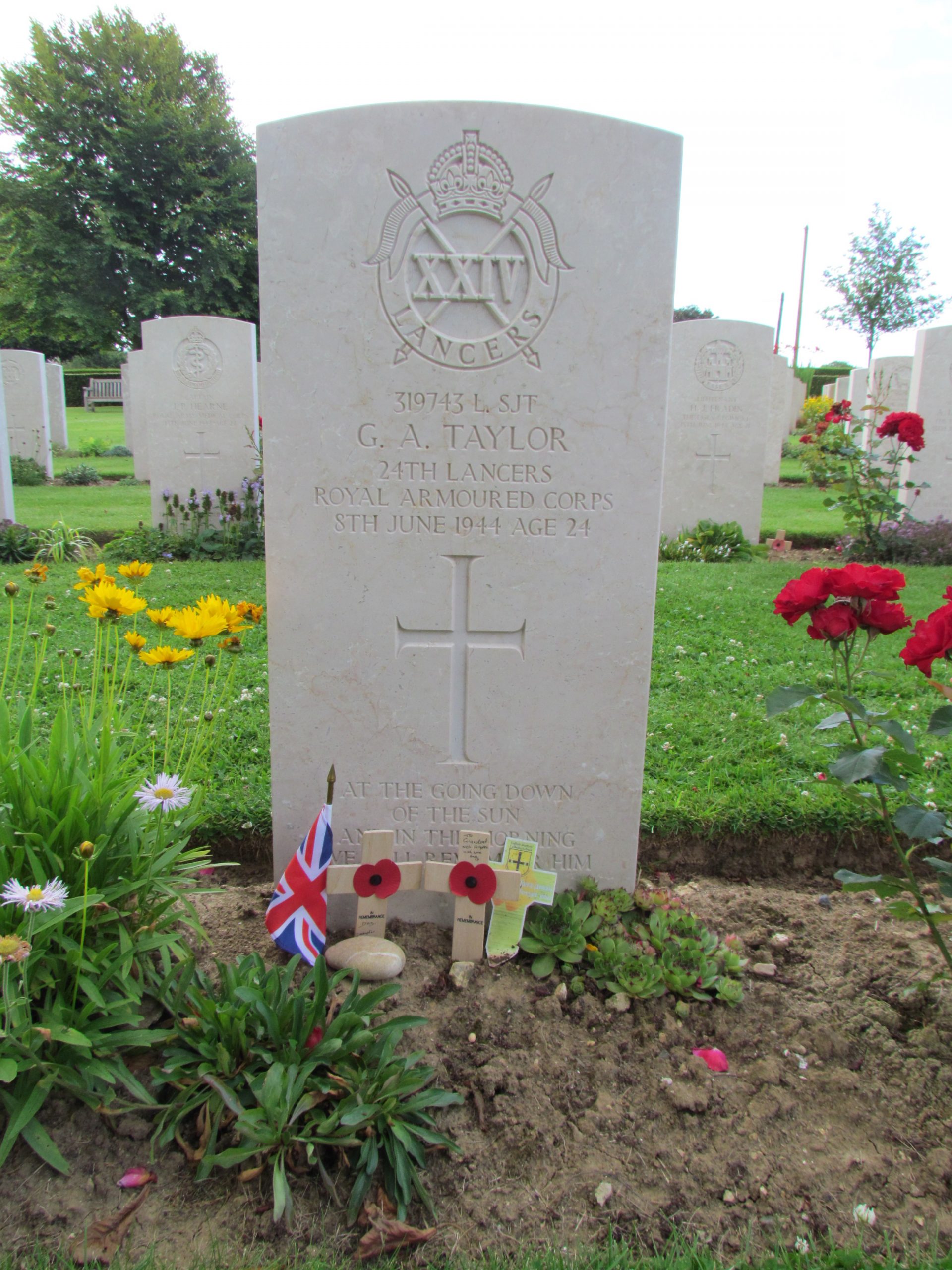 Additional information from Normandy Memorial Trust: George Taylor was initially buried on the outskirts of Loucelles near Église Notre-Dame de la Nativité before being re-interred in Bayeux War Cemetery on 15 March 1945.