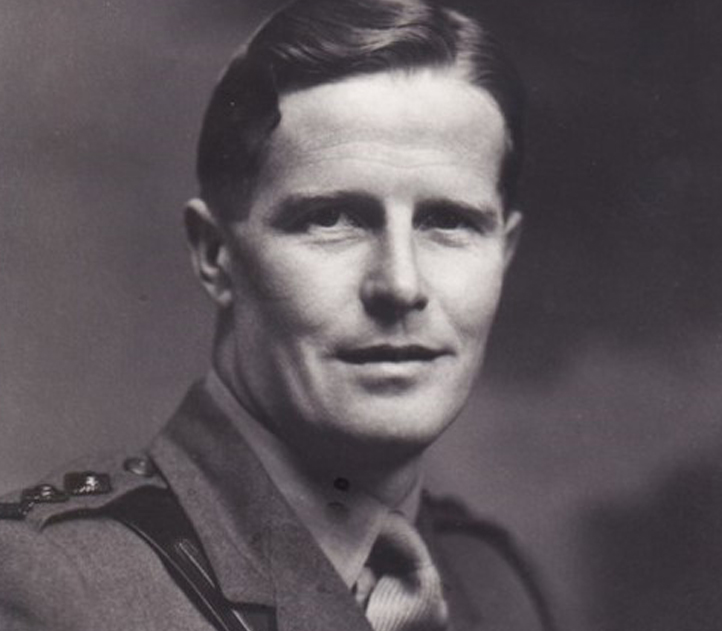 This story is shared by the Trust with kind permission from Eric and George Maginnis, George's nephews.

Lieutenant George Alexander Maginnis was born on 10 May 1911 in Aughnacloy, County Tyrone, Northern Ireland, the 2nd son of Edward & Matilda Maginnis. He had five siblings: Gilbert, Eileen, Harry, Mildred and Marion. He attended Armagh Royal School from 1923 to 1928. He then worked in the retail business until joining the Army.

He was an avid sportsman, especially rugby. In the 1930s he played twice for Ulster and in 1940 he captained the team. 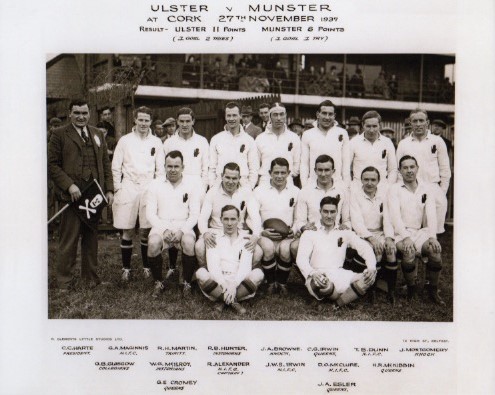 Uncle George (first player, back row, on the left); his friend Jimmy Montgomery, who was awarded the M.C. survived the war, is back row far right

He was also a talented cricketer

In early 1940 he joined the British Army with three of his rugby/cricketer colleagues - brothers Harry and Reggie Morgan and Jimmy Montgomery. He was granted a commission and volunteered for the Airborne forces. Upon successfully completing parachute training (Course #14) at RAF Ringway in 1942 he was posted to Attack Platoon, 1st (Airborne) Battalion, Royal Ulster Rifles. 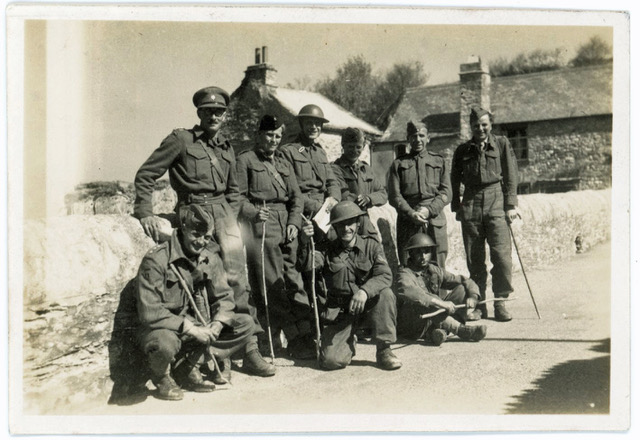 Relaxing with fellow officers - George is 3rd, from left 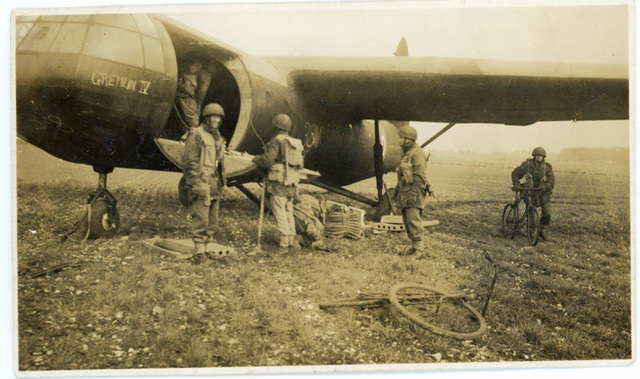 On D-Day, 6th June 1944, Lt. Maginnnis took part in Operation Overlord and flew to France in a Horsa glider.

He was an avid letter writer during his time in France, most of them to his mother and siblings - about two dozen of these have survived. Due to military regulations, and his concern about not worrying his family, the contents of his correspondence was mainly related to "keeping fit', "appreciate the cigarettes", "request for newspapers", "cake from sister Millie" etc! The closest he got to referring to military matters was "writing this in a slit trench and a deep one at that. Never dug so hard in all my life..."! In another letter Uncle George refers to his friends, brothers Harry & Reggie Morgan whose war ended on D-Day+1. Reggie was killed and Harry lost a leg, but survived the war -  as did Jimmy Montgomery.

My uncle was killed by a mortar bomb six weeks after landing as he was exiting B Company HQ, Breville, Calvados, France. There is a letter, dated 25 July 1944, to my grandfather from a Capt. R. Martin Burke, who was the only person present at the time of my uncle George's death, detailing the circumstances of that sad event:

I am writing to you as I had the unhappy experience of being the only other person present at the time when George received the wound which resulted in his death. The circumstances were as follows, to the best of my recollection:-

B. Coy. Headquarters were situated in a farm building leading out to a courtyard, there were buildings on three sides of the courtyard and it was bounded on the fourth side by a road. We were at the time the most forward troops and the enemy was distant only a matter of hundreds of yards. The road was persistently mortared and shelled at intervals throughout the day and night. On Tuesday morning 18th July I was seated at a table in Coy. H.Q. doing some clerical work when George came in about 8.15 am for a chat and a smoke as was his invariable custom, his platoon position being very close to our H.Q.

We passed a few remarks and I was just finishing off my work when George casually strolled across the room to the open doorway. The next thing I heard was a very loud explosion which I recognized as being an enemy mortar bomb. This had apparently fallen in the courtyard itself. I turned round and saw George still in the doorway, then he turned round and faced the room, took 2 or 3 paces towards my table and then collapsed on the floor. I found he had been hit in the right side of his chest, and having done what I could to make him comfortable I ran next door for the medical orderlies.

They arrived within a minute of George having been hit and after a brief examination informed me there was nothing they could do, and I should say that it was only a matter of a minute later that they pronounced George dead. Please forgive this cold blooded exposition of the case but this is how the whole tragic event occurred as I saw and remember it.

For your comfort I would like to say that from the moment he was hit George neither uttered a sound or spoke a word and from the moment of his collapsing on the floor he made no movement of any sort. I am sure he lost consciousness almost immediately after receiving the wound, and died quite peacefully within 2/3 minutes of being hit. His death cast a gloom over the whole battalion in which he was very popular indeed and we all feel his loss keenly. Please accept my very deep personal sympathy in this dreadful loss you and your family have sustained, and I feel the poorer for the loss of a very good friend.

George has been buried under Battalion arrangements in an extremely well tended military cemetery here in Normandy but full particulars in this connection will reach you in due course from the official authorities. This then is all I can tell you, but felt you would like to know all available details, and I trust I am not harrowing your feelings unnecessarily by writing as I have done.

I trust that God may comfort you and yours in your grief at so grievous a loss. 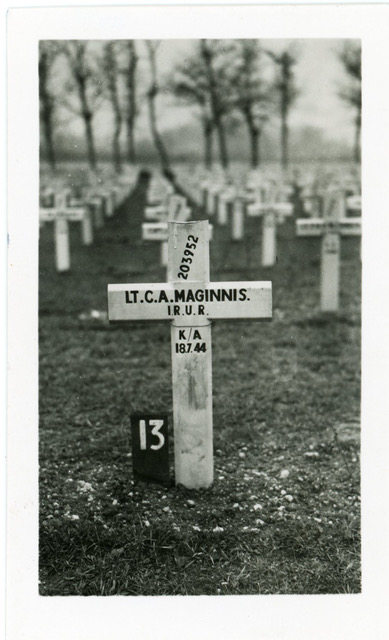 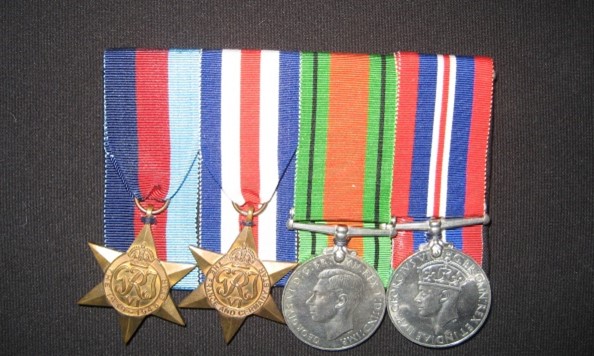 In the early 1950's George's parents visited his grave. 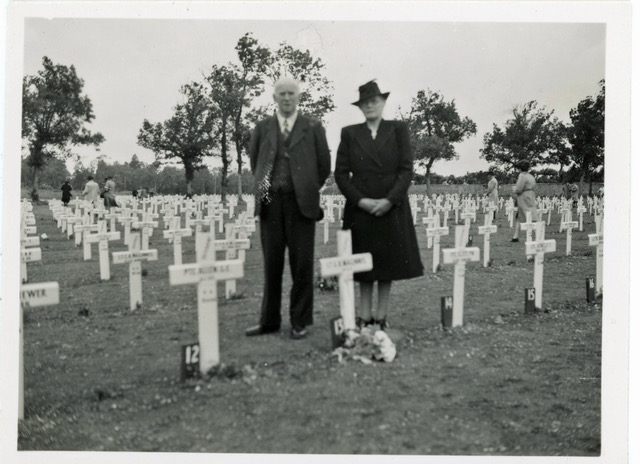 His letters are now in the possession of his nephew, my cousin George Maginnis - together with letters of sympathy to his father from his C.O. Lt. Col. "Hank" Carson, Major General Richard Gale, Commander 6th Airborne Division and others. He also has his Omagh and Civil Service rugby "caps" and other related items. 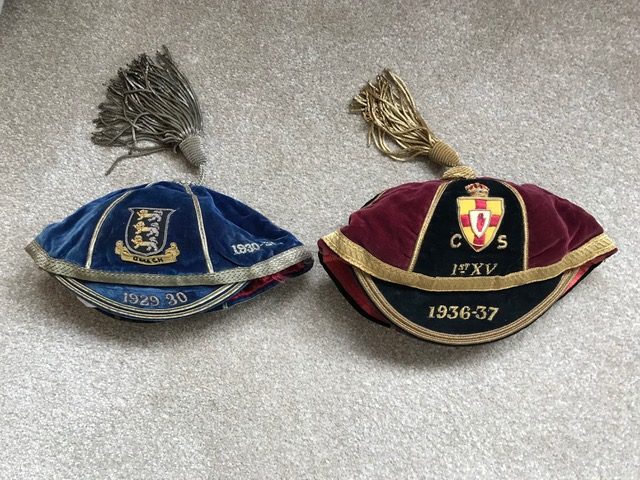 In the May 1947 edition of "Quis Separabit" (the magazine of the Royal Ulster Rifles) Uncle George's Commanding Officer,  Lt. Col Carson, wrote an account of a "pilgrimage to Normandy" he made in June 1946. He wrote "We walked round all the Company localities at Le Mesnil - all the slit trenches have been filled in and all the farms made habitable. I visited the spot where poor George Maginnis fell - a small child was sitting on the very spot oblivious to all that had happened there in those fateful months of 1944".