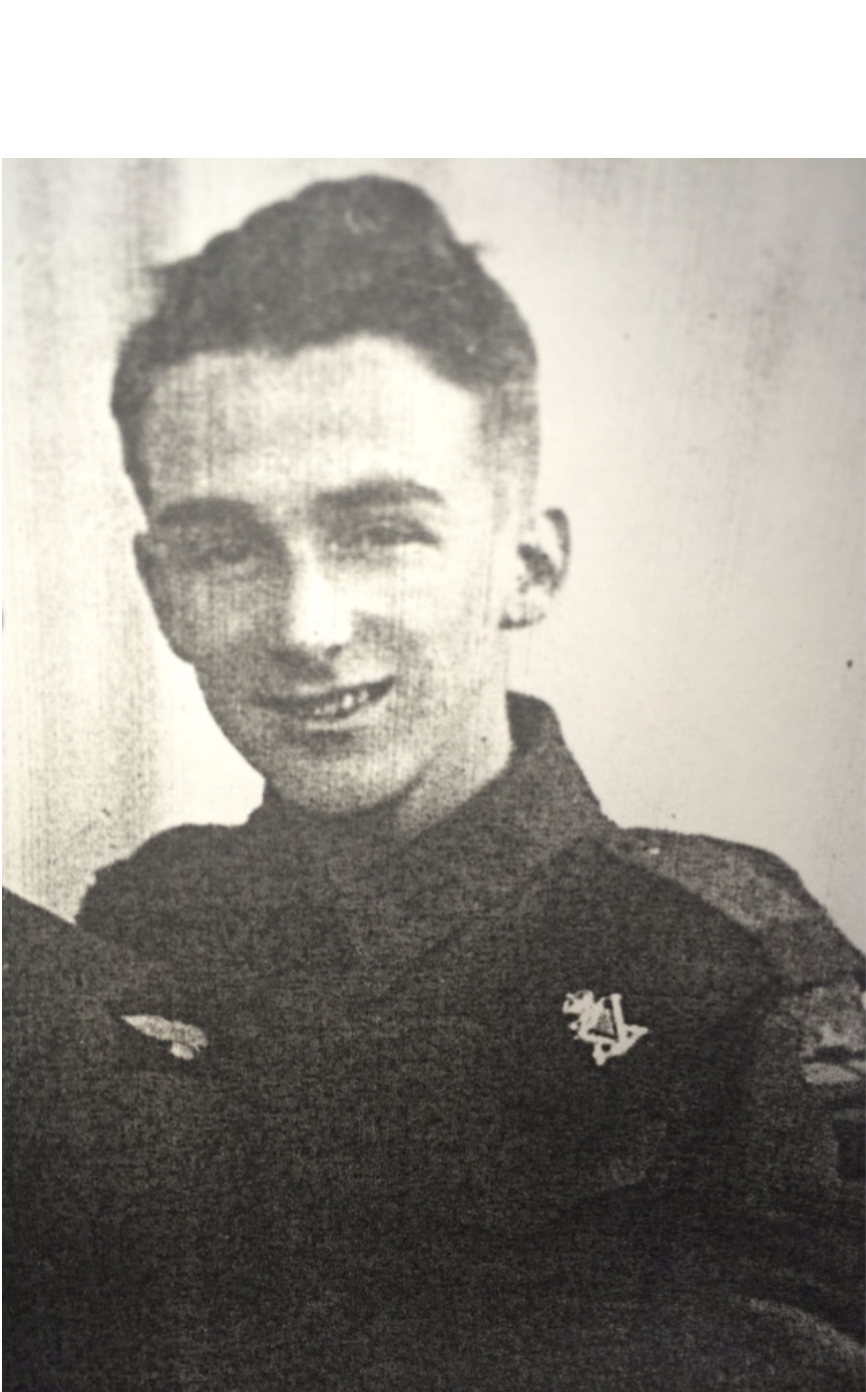 The story and photographs are shared by the Trust with kind permission from Frederick's great-niece, Dawn Butterworth.

My Great Uncle Fred was born Frederick William Hardman on 26 September 1918 and was from Radcliffe, Lancashire. He enlisted on 15 September 1939.

Having done six months training he was posted to the 5th Battalion of the Manchester Regiment (which was a territorial Machine Gun Unit) on 5 March 1940, part of the 127th Manchester Brigade. His battalion landed in France on 24 April 1940 and became part of the British Expeditionary Force.

When they first landed in France they were sent to Halluin on the France-Belgium border, however following the German invasion of Belgium they moved to the area of Douai. Due to the advancement of the German Army, they then withdrew back towards Dunkirk and were engaged in close combat fighting to the west of Bergues. He was one of the lucky ones to be evacuated from Dunkirk on what I believe was the 1 June 1940.

He spent the next four years back in England, originally being posted for a short time to the Loyal Regiment (North Lancashire) before returning to the Manchester Regiment and then being posted to the 30th Battalion of the Royal Ulster Rifles along with a promotion to Lance Corporal.

He was then transferred again to the 6th Battalion of the Royal Scots Fusiliers on 3 June 1943, which was to be his last regiment. They had done some gruelling training on the Yorkshire Moors, mainly during the winter months and finally left the UK on the 13 June 1944 heading for Normandy. Upon arrival on the beaches they had gradually moved their way inland up the frontline until they found themselves on 25 June in a field some six miles inland from the coast. The information I have of 25 and 26 June has been gleaned from a very helpful excerpt from Charles Hanaway, who also served with the 6th Battalion of the Royal Scots Fusiliers.

They were part of the 44th Brigade of the 15th Scottish Division and there were approximately 700 men on the evening of the 25 June waiting in that field. They were about to find out what all their training had been leading to, the Commanding Officer was to address them all and these were his words:

“Men, we are on the eve of what we have been training for these past years. Tomorrow, starting at 7.30am, we are going into action. We will be facing the cream of the German Army, the 12th SS “Hitler Jugend” Division, full of 17 year old fanatical Adolf Hitler worshippers. But not to worry though, for you are the pick of the British Army and soon now we will be in a very interesting party. Now off you go and get some rest”.

As it became darker, the bagpipes fell silent and they moved forward as quietly as possible to the start line for Operation Epsom which was another field outside the village of Norrey-en-Bessin. In the drizzling rain they mingled in their individual groups, no doubt wondering what the next day would bring.

At 7.30am on the morning of the 26 June all hell broke loose as guns of various calibre were sending their shells over the heads of the 6th Battalion, landing hundreds of yards ahead. Battleships offshore were firing their 16 inch shells and the RAF were also due to add to the battle, however unfortunately were unable to assist due to bad weather conditions.

When the shelling commenced the battalion moved out of the field and made their way through the village. When they passed the church there was a piper stood on the steps but sadly due to the deafening noise from the shelling it was virtually impossible to hear what he was playing however it was just enough to know that he was there and hands were raised in acknowledgement. They then entered a corn field and in lines they made their way across the field towards the enemy. They were to advance a hundred yards every 3 minutes however the shelling was landing just hundreds of yards in front of them as they advanced and they suffered their first casualties. Those still standing advanced through the field with their weapons held high above their heads but were being attacked from all angles by the enemy. Not to be deterred and with the assistance of the barrage of gunfire they made enough progress to reach their target which was the village of St Mauvieu-Norrey.

The village was reached at around 11am, some three-and-a-half hours after their start that morning, and they were met with house to house fighting which went on until around 4pm. There were many casualties and thankfully they were relieved by another regiment of their brigade, the Kings Own Scottish Borderers, and they were moved back to comparative safety.

In total there were 30 dead that they were able to gather and place in a large truck to take with them to be buried but there were also 120 others wounded. In total they had lost 25% of the battalion.

Somewhere in amongst those dead and injured was my Uncle Fred. Sadly, I have not been able to find out what part of the battle he made it through to or if he was one of the dead buried in a shallow grave with rifle and helmet atop or one of the wounded who was to perish that same day. I just know that he is one of the very brave men who lost their life on 26 June 1944 and whose final resting place is Ryes War Cemetery, around three miles inland from the coast where he landed less than two weeks earlier.

Fred had married Jenny Butterworth on the 18th January 1941 and their son, also named Fred, was born on 13 October 1943. Fred had been able to get home on leave to see his son only once before he was killed. On the 60th anniversary of D-Day in 2004, his son Fred was finally able to visit his father's grave. 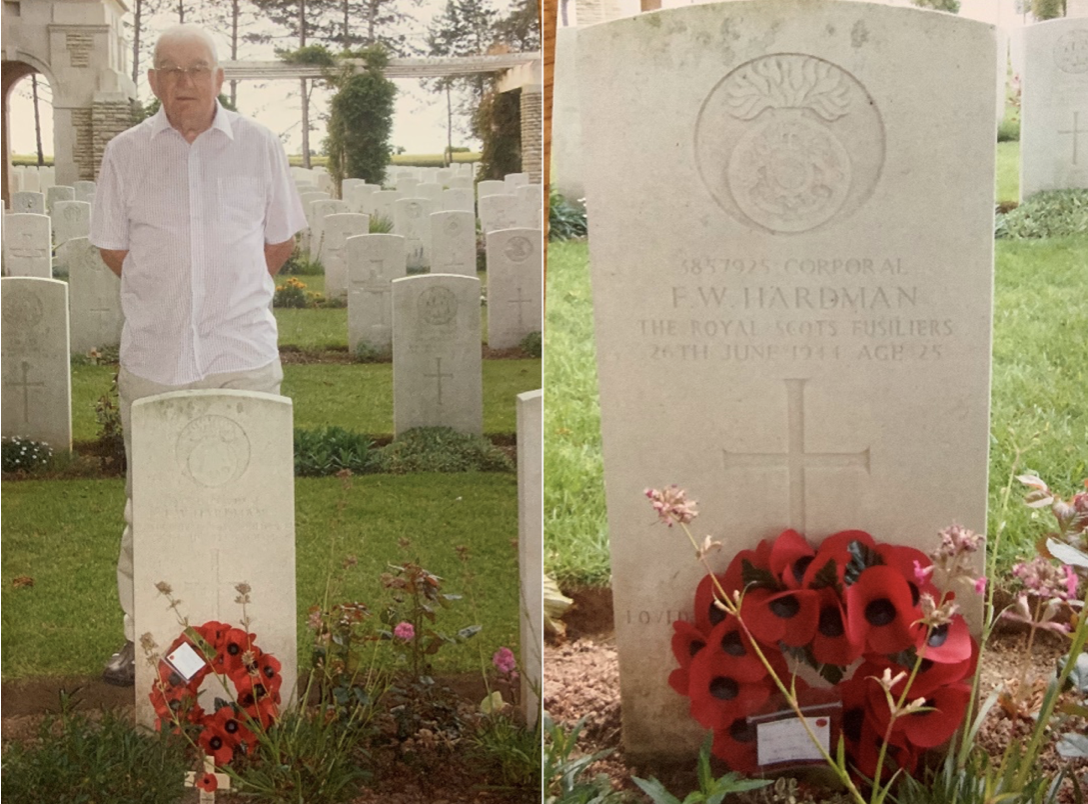 The British Army Casualty List 1939 - 1945 records that Frederick Hardman was Killed in Action on 26 June 1944 as opposed to having been wounded and then died of wounds.