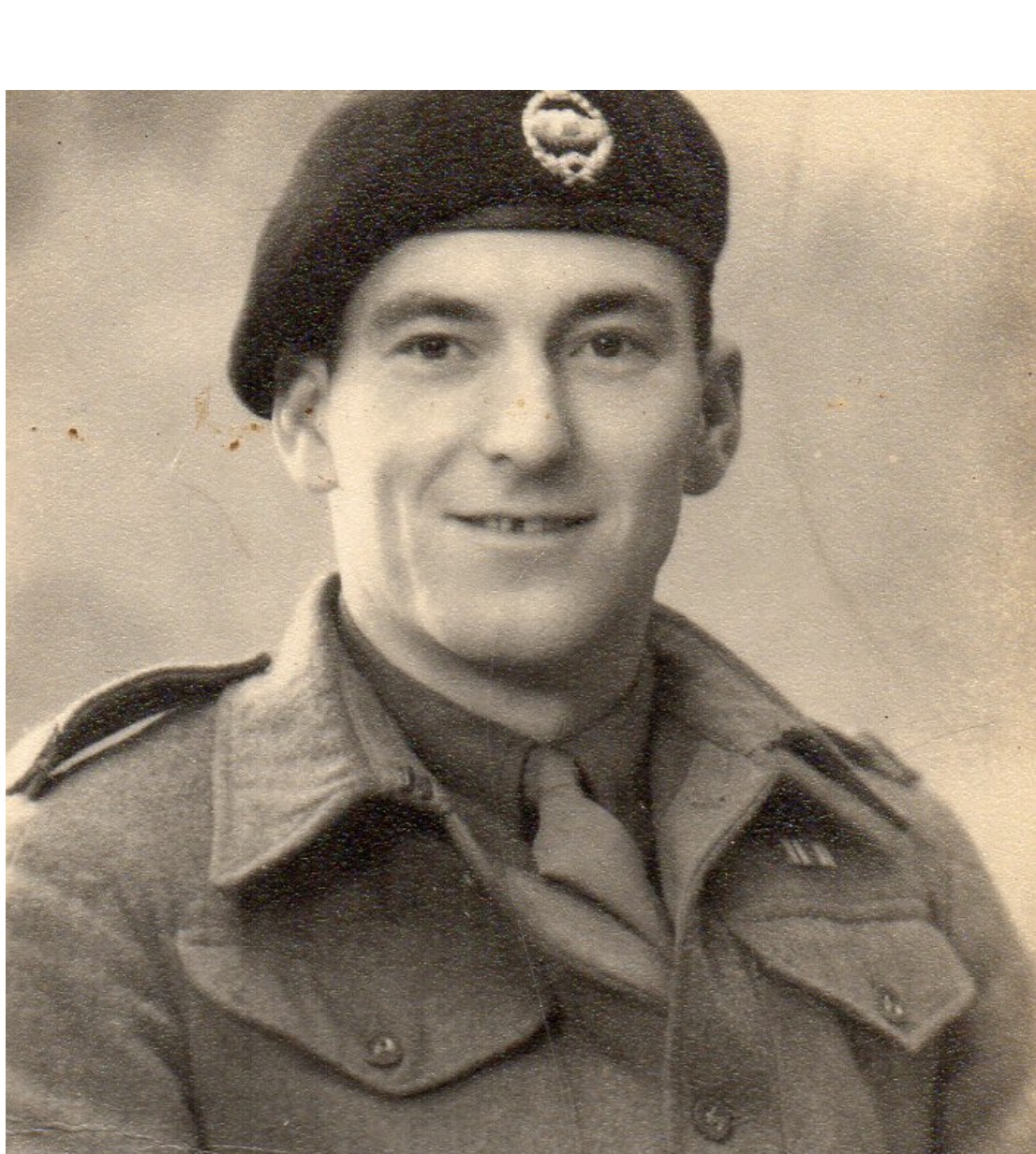 The story and photographs are shared by the Trust with kind permission from Ernest's nephew, Roger Fogg and family.

Uncle Ern was the eldest of three brothers born around the time of the First World War to Ernest and Eliza Fogg. The family had their roots and origins in an area of Bristol called 'The Dings'. They grew up surrounded by many of their family and friends in a close-knit community. The brothers all went to the same schools, played football, went on holidays, dated girls, went on camping trips and cycle rides to the Mendips and the surrounding countryside.

Ern followed his father into the business of carpentry, specifically French polishing. Few examples of his work remain in the family, but he was evidently very good at his craft. When war was declared all the boys were still living in the small terraced house in Days Road, St Philips.

Their father had served in the First World War as an engineer, and eventually all three were called up for service. Ern was drafted into the Gloucester Regiment and went off to do his training locally. The middle brother, Ted Fogg, my father, eventually found himself attached to 7th Armoured Division and spent three years in the desert before landing at Salerno and then on to D-Day and eventually Berlin. Youngest brother, Len, joined the navy but after just a few months caught tuberculosis and was invalided out of the conflict. 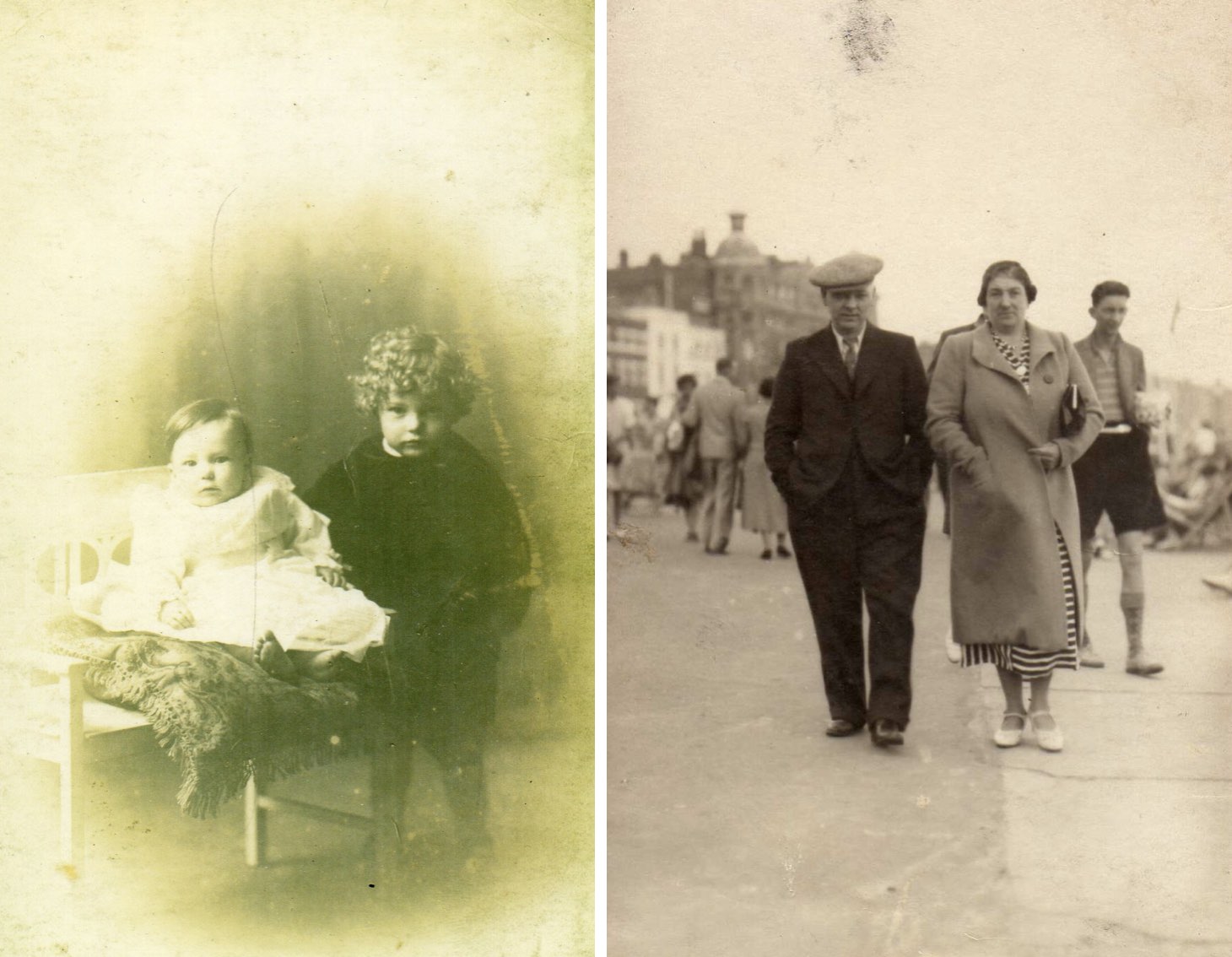 Pictured: Two-year-old Ernest with baby brother Ted in 1917, and the brothers' parents, Liz and Ern.

The Dings was situated in a dangerous area of Bristol, surrounded by Temple Meads station and its marshalling yards, factories, gas works and other targets for the German bombs. The Bristol Blitz wrought havoc in the area, yet the family tried their best to carry on with life as best they could. In the months leading up to D-Day, there was a time for reunions and parties. Ted had returned from the Desert, Len was on the way to recovery and Ern was training hard with the Gloucesters. They knew the invasion would come soon, and there was a certain urgency about the celebrations, the drinking, and the partying leading up to 6 June 1944.

Ern was a wonderful piano player. He liked stride piano, in the manner of Fats Waller, but he could also play many of the popular bar room, music hall, and slushy love songs of the day. Naturally he was in demand in the local pubs and front rooms where the pianos were normally kept.

By May, Ern and Ted were back in barracks making preparations for the forthcoming invasion. Ern was a driver and was allocated a lorry filled with cans of petrol with which to replenish the other vehicles of the regiment. Ted drove a scout car for the tactical HQ of the Desert Rats. They agreed to keep an eye out for each other, and they both sailed for Gold Beach with their own regiments on 6 June 1944.

Ted drove ashore by the evening and made his way inland to a spot near Rhys. He got permission from his own HQ to go and see if his brother was OK. He found the RHQ of the Gloucesters not far from Bayeux. He located an officer he recognised and enquired of his brothers whereabouts. The officer replied “He was here, but is not now”. Ted knew exactly what that meant.

It seems that Ern, driving his petrol laden truck, had lagged behind the others and pulled over to check his map. The Germans had mined many of the verges in the area, and Ern drove over one, setting it off. Of course there were no remains, everything disappeared in an enormous explosion. There was nothing of Private Ernest Fogg to be found. 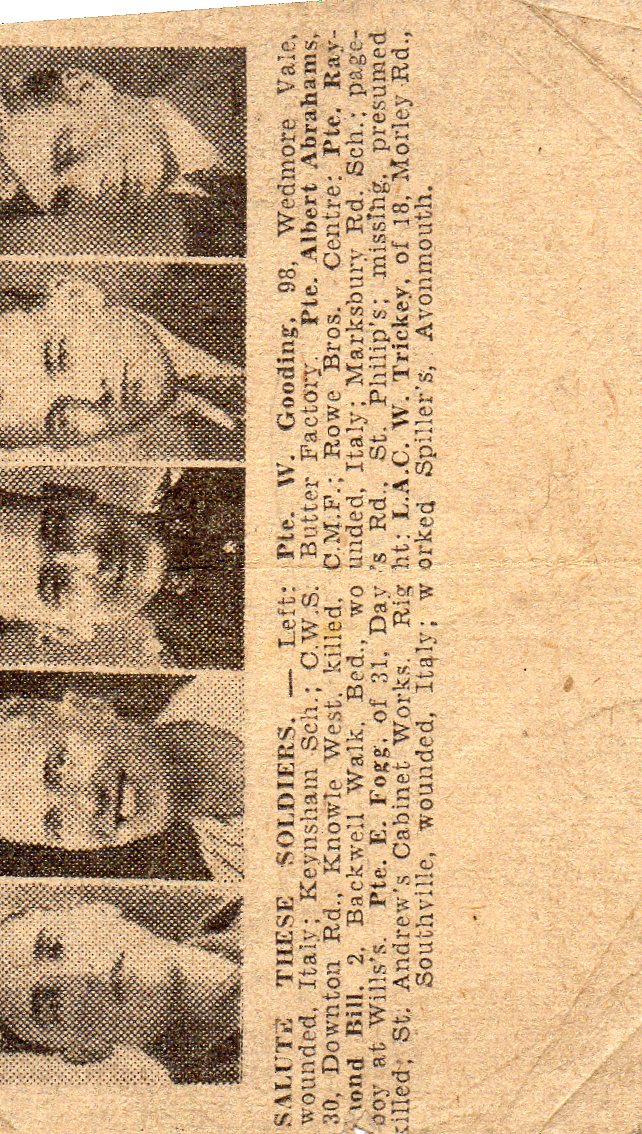 Back at home, Ern's mother had been preparing a meal in her kitchen when the postman pushed a letter through the box. She opened it and fainted in the hallway. It was a letter of sympathy from one of Ern's officers. It was the first that she had heard of his death. Official confirmation came a few days later in the shape of a telegram. 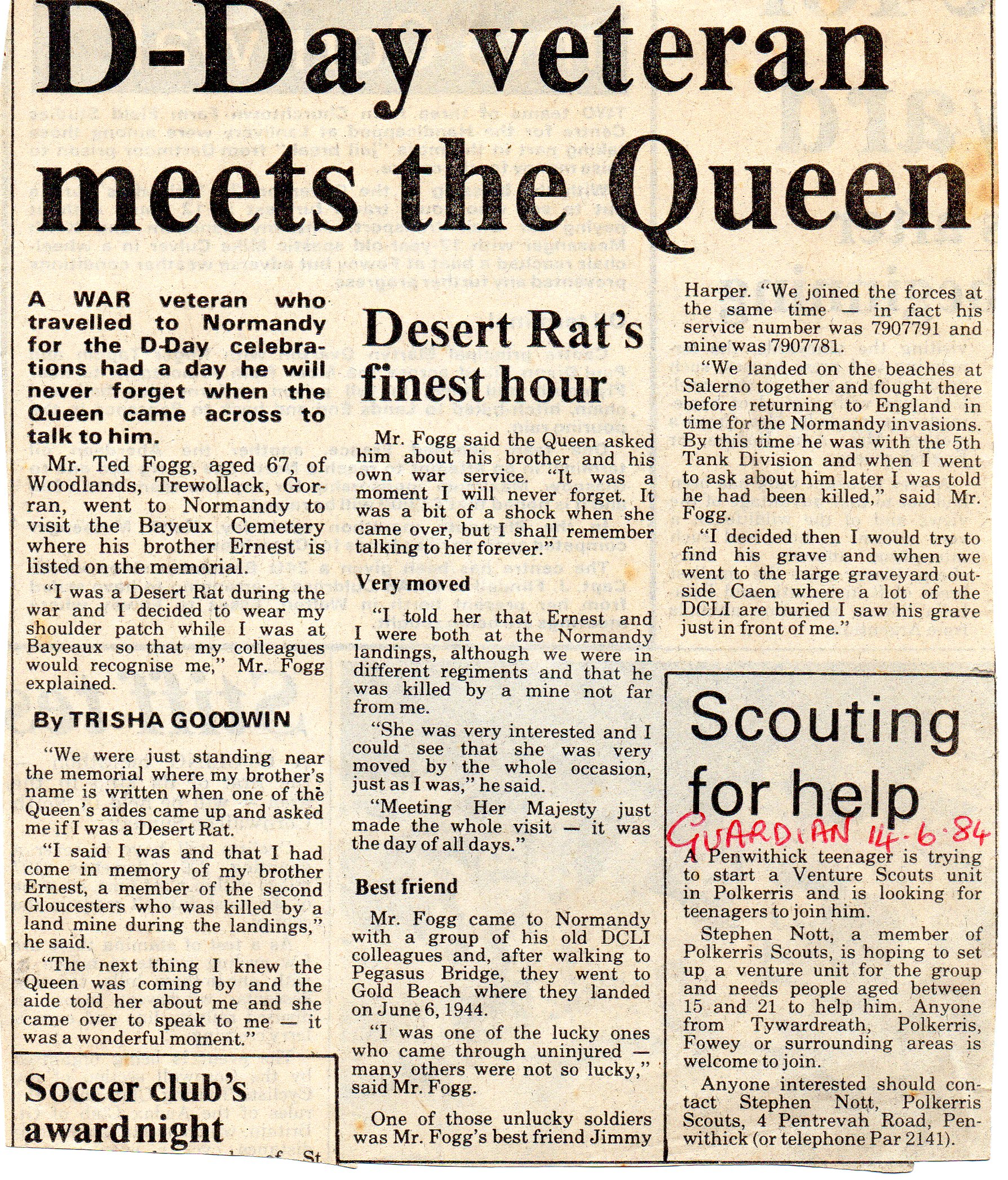 Ernest Fogg is commemorated on the pillars at the Memorial to the Missing at Bayeux War Cemetery but has no grave. Ted, my father, visited a couple of times, and was introduced to the Queen on one occasion at the cemetery. The exact spot where the explosion occurred is not known at the present time. Len and Ted went on to live to a good age. Ern's father died at home soon after his son from a heart attack, but his mother lived to be just short of a hundred years old. 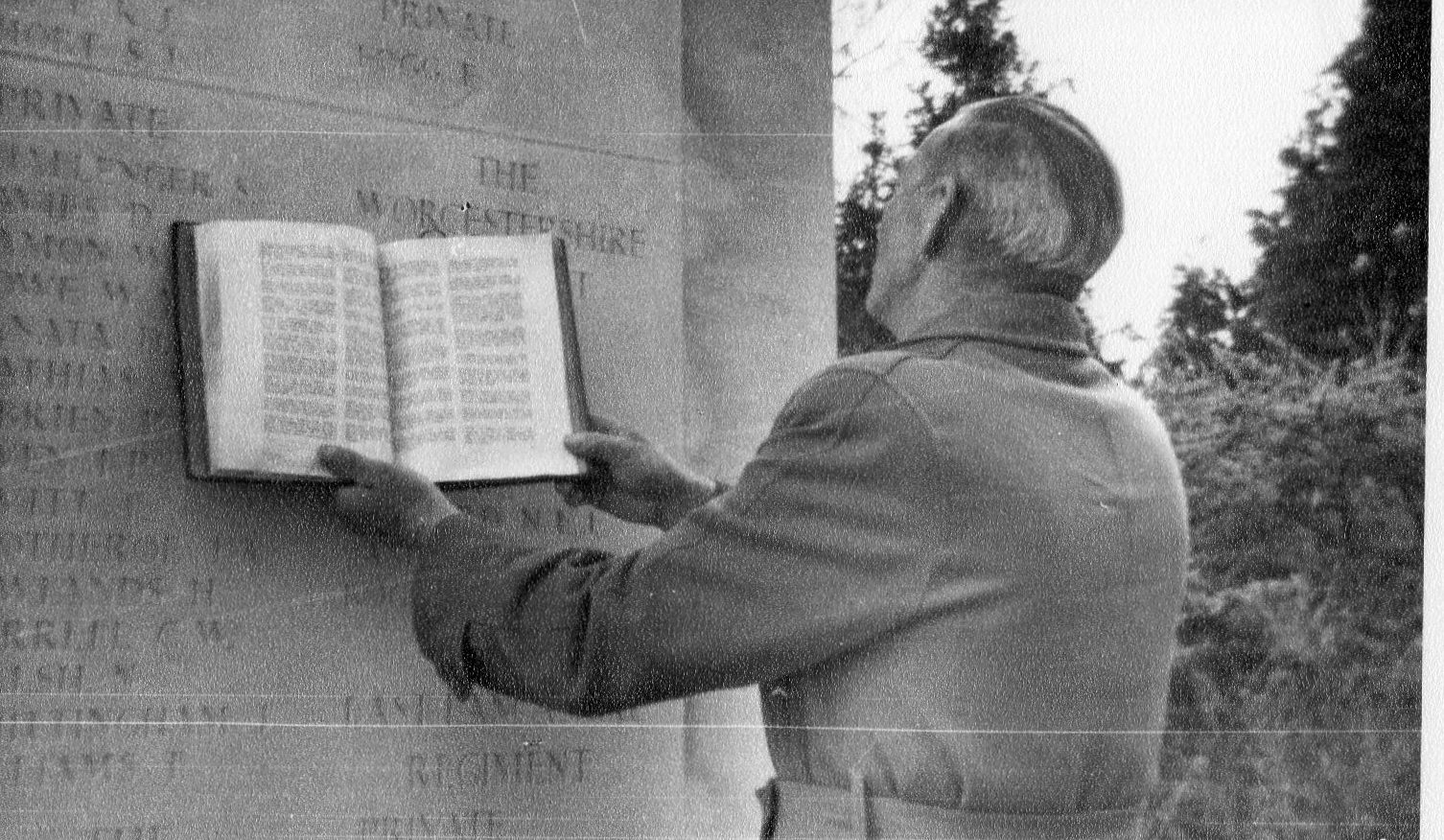 Ted Fogg in 1972 visiting Bayeux Cemetery and seeing his brother Ernest's name engraved on the memorial.