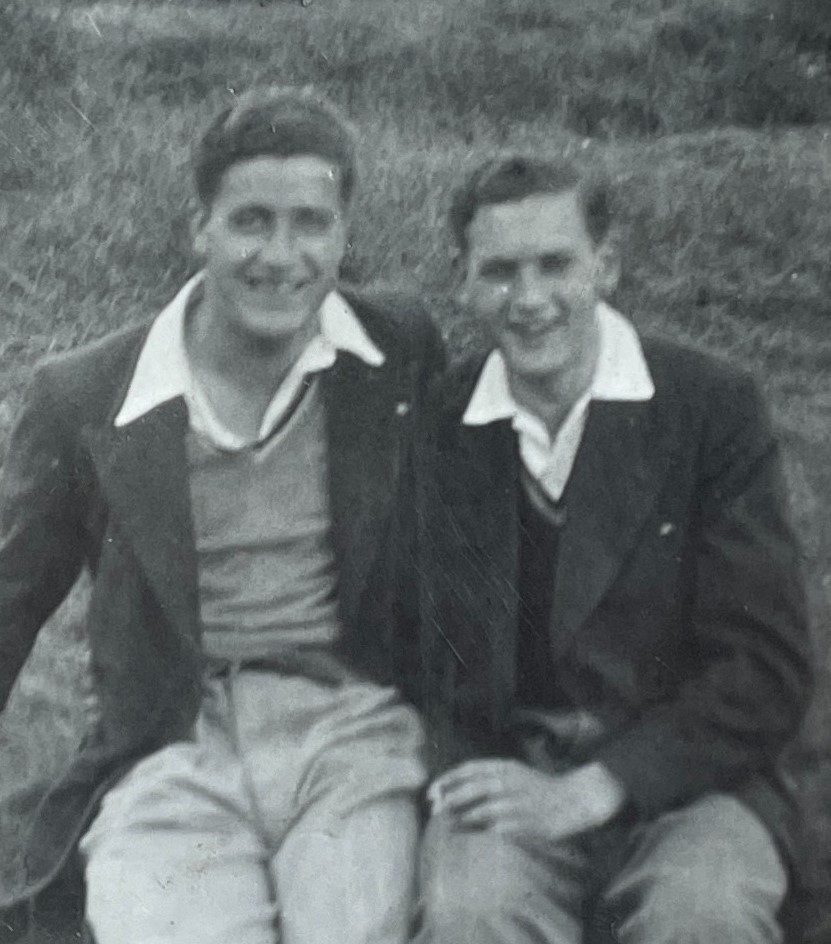 This story and photo is shared by the Trust courtesy of Brian Dilley, Grandson and Great Nephew of Ernest and Fred Payne.

Ernie and Fred Payne (pictured above, L-R) were civilian brothers who were called up to the 2nd Battalion, Royal Ulster Rifles in 1940 and died within a month of each other in Normandy in the Rifles’ first and second assaults after D-Day.

They were both conscripted into the Royal Ulster Rifles and dispatched to Ballymena, Northern Ireland, replacing the troops that had perished in the heroic holding of the line in Dunkirk. The Royal Ulster Rifles was the only regiment to have both regular battalions (airborne and infantry) involved in the D-Day landings, the first battalion to enter Caen on its liberation, and the regiment favoured by General Montgomery who, as the troops were being pushed into the sea in Dunkirk in 1940, is reported to have said, “It’s alright then, the Rifles are there!”.

Ernie was a family man and a 6ft 1ins gentle giant. 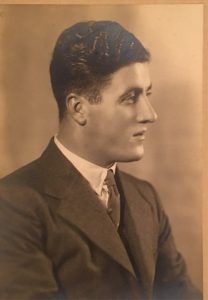 As he walked to work as a butcher each day, he was followed by a Jackdaw which hopped across the rooftops along his route to the shop. The bird was to become so tame that it would nestle in the top of his jumper while he fed it.

He married his sweetheart, Grace, in 1938 and Fred was his best man. 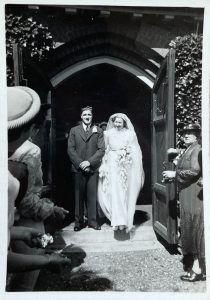 He met Grace whilst working at a butcher shop in Barnet, London. Grace had been sent into service by her parents and moved to London to work as a housekeeper for Lord Trenchard, the founding father of the Royal Air Force. Grace was already a victim of war, as her own father had been killed in action during the First World War in 1914 in the France and Flanders campaign, when Grace was only 3 years old. 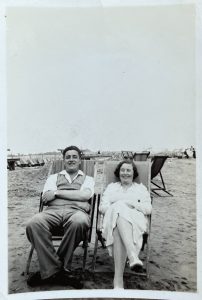 Fred was a bachelor and keen sportsman and considered to be “high-spirited”. Ernie and Fred were not just brothers, but best friends. They often called out to each other using a trademark whistle, ensuring that they knew when each other was nearby. They considered themselves fortunate and often referred to “the old Payne luck” when things worked out for them. 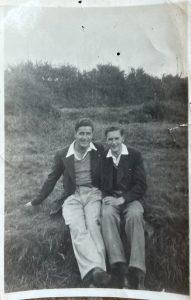 They crossed the Channel on the same boat on D-Day, landing on Sword Beach before meeting up at the battalion's assembly area in Lion-sur-Mer. The Rifles were then ordered to the front line as the troops ahead of them were diverted towards the bridges over the River Orne, holding which was key to uniting with the airborne divisions, including the 1st Battalion, Royal Ulster Rifles, that had landed the night before D-Day.

The battalion’s first battle in Normandy was an assault on Cambes, a small village 10km south of the D-Day beaches, that was occupied by German forces entrenched behind 10ft high stone walls and surrounded by woods. Following an unsuccessful company strength attack the day after D-Day, the Rifles retreated to Le Mesnil, from where Ernie wrote his last letter home. He signed off saying “…don’t worry as we shall be OK. Give Pam [his daughter] a big X from me.”. 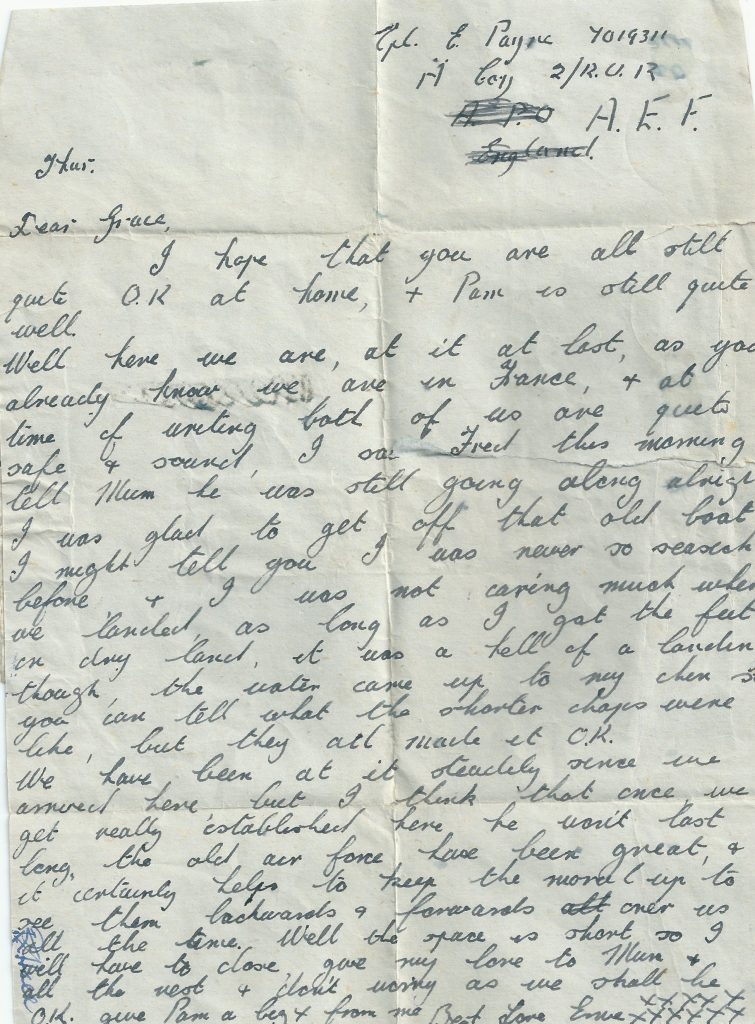 The following day they were part of a battalion strength attack which involved the full battalion lining up along the edges of two fields of waist-high corn and marching 1,500 yards behind a rolling barrage of artillery fire, towards the stone walls of the village. If they moved too quickly, they would be killed by their own side’s fire from behind. If they moved too slowly, their commanding officers would pick them up from the corn and drive them forwards towards the enemy.

Fred and Ernie started in adjacent fields. As they advanced, they could see some of their comrades disappear into the corn as they were hit. Family folklore has it that Fred called out to Ernie with the Payne whistle during the assault and received a response telling him he was OK. He reached the village, which was successfully liberated, believing his brother had made it as well. He hadn’t.

Fred attended his elder brother’s funeral the following day and wrote to his parents, assuming that they would have already received the news of Ernie’s death via the official telegram notification. They had not. The telegram would not arrive until a month after Ernie’s death.

After a month during which the allies struggled to advance, Fred was still in Cambes but this would soon change. Other battalions had made several unsuccessful attempts to capture Caen, the capital of Normandy, and the objective for D-Day itself. It was now the turn of the Rifles to play a part in its liberation. They advanced through Lebisey Wood, stepping over the bodies of their comrades from some of these previous battles.

The assault itself was preceded by a massive aerial bombardment the night before, designed to weaken the German defences. The troops advanced across open fields towards the city, much as they had in Cambes. Further aerial bombardment supported the attack but, concerned that they may drop their bombs short onto their own troops, the planes dropped them deep into Caen itself, destroying the city but missing the German defences they were intended to destroy. During the battle, Fred was wounded and evacuated to a field hospital, where he died the next day.

The brothers died so close together that the announcement of their death appeared in same edition of the local newspaper. 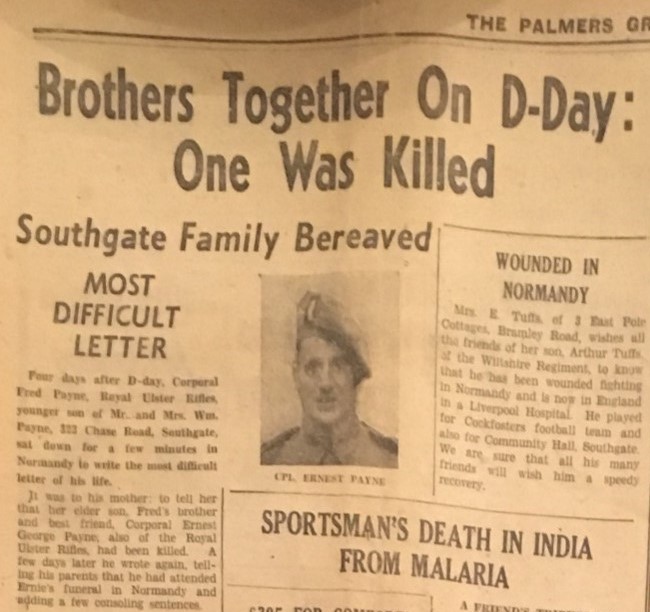 The full article, transcribed below, shows the affect the deaths had on the family

Brothers Together on D-Day: One Was Killed
Southgate Family Bereaved
MOST DIFFICULT LETTER
Four days after D-day, Corporal Fred Payne, Royal Ulster Rifles, younger son of Mr. and Mrs. Wm. Payne, 323 Chase Road, Southgate, sat down for a few minutes in Normandy to write the most difficult letter of his life.
It was to his mother to tell her that her elder son, Fred’s brother and best friend, Corporal Ernest George Payne, also of the Royal Ulster Rifles, had been killed. A few days later he wrote again, telling his parents that he had attended Ernie’s funeral in Normandy and adding a few consoling sentences.

THOUGHT SHE KNEW
Fred assumed that his mother had already heard the news. But she had not. Her younger son’s letter was the first intimation of the sorrow to be borne, not only by Mr. And Mrs. Payne, but by the stalwart Corporal’s young wife, Grace, of 239 Chase Road. There is a little daughter, too, 21 months old Pamela.
In fact a month was to pass before the news was officially conveyed and although - in its absence - there may have been slight grounds for hope, the fact of Ernie’s letters coming to a stop, coupled with the certainty that his brother would not have written about his brother’s death unless he had been sure, gave little ground for hope.
The brothers Payne were among Southgate’s smartest fighting men: well built, neat, earnest. Ernie was the taller of the two, a six-footer, exceedingly fine in physique. They were in the same battalion – A and B Companies – and often had leave together.

DEVOTED FAMILY
They were firm friends; in fact the whole family, including sister Doris (Mrs North), 268 Chase Road, are devoted to each other. The boys call their father by his Christian name: were young and happy with him.
Corporal Ernest Payne, who was 31, was educated at Chase Road C. of E. School, and afterwards with Arthur Bain, serving first in the Southgate shop and then at Winchmore Hill, where he was well known and popular.
Ernie was essentially a home lover. Fred, who is 29 and has been promoted Lance-Sgt, since D-day has several sports interests, and before the war was prominently associated with football and cricket.
Both belonged to the Southgate branch of the British Legion.

MR. WM. PAYNE WAS BORN HERE
Their father was born in Southgate, and it is of interest to record that Ernie lived during his short married life in the Chase Road house which was formerly the home of his grand-parents.
The “Gazette” extends sympathy to the bereaved and on behalf of Mr. and Mrs. Payne and their daughter-in-law offers to all kind friends their grateful thanks for the constant enquiries.

FURTHER GRIEVOUS NEWS
As we go to press we learn with deep sorrow that Lance-Sergt. Fred. Payne – about whom, and whose brother, we had written the above account only a day or two previously has died of wounds in Normandy. The sad news was conveyed to the shocked family by Fred’s Company Commander.
While further details are awaited, we take this opportunity to tender to the twice-bereaved family our profound sympathy. To have lost both sons is tragic enough; to have the double blow descend in the course of a few weeks is bitter indeed.
Fred Payne was a fine young man, bubbling over with healthy good spirits and vitality. His death will be deplored by a wide circle of friends so many of whom are now dispersed among the armed forces.

They were survived by their parents, a wife and two daughters, one of whom never even met her Dad, and a sister who went almost blind with the shock of the news.

Grace raised their two daughters on her own, supported by a succession of cleaning jobs. She would never talk about what happened to Ernie, and never had another companion for the rest of her life. When she died in 1996, her family found a box with Ernie’s letters home, carefully preserved under her bed. The letters included the one he wrote on the crossing on D-Day and his last letter written in Le Mesnil.

65 years after the events of D-Day, on a holiday to Normandy, Ernie and Grace’s grandson, Brian, started to develop an interest in what had happened. He could never have done so while Grace was alive. Her refusal to discuss the painful events following D-Day was her way of coping.

Brian pieced together the events of the war years from public records, newspapers, history books, the Royal Ulster Rifles war diaries and the letters which Ernie sent to Grace. He wrote a book recording their journey from call-up to their deaths and Brian is now one of the Guardians of the British Normandy Memorial. Ernie and Fred's story, and their memory, is therefore preserved for future generations.

Additional Information from the British Normandy Memorial: If you have any information relevant to Fred and Ernie’s journey, or if you would like to find out more, please contact us and we will put you in touch with Brian Dilley.