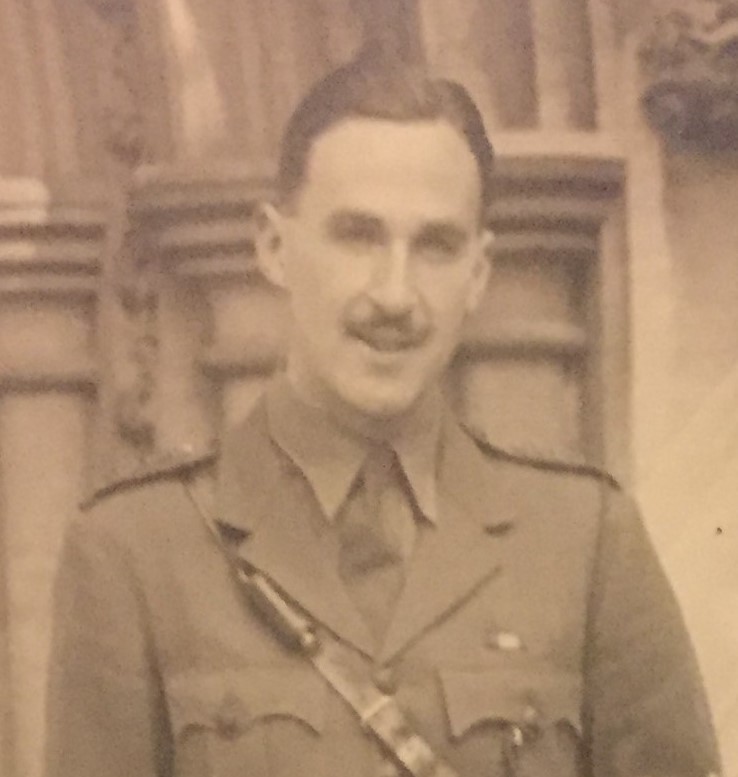 The photographs are shared by the Trust with kind permission from Ewan Walker, nephew of Eric Francis Johnston with additional information from Eric Bruce Cliff Johnston, Eric's son.

Eric was born on 31 January 1915 in Holywood near Belfast, County Down, Northern Ireland, the second son and fourth child born to Frank & Lucy Johnston. I believe his parents were living at 10 Lady Mile, Holywood, County Down at the time of his birth. Eric’s elder brother, Bruce, died in 1930 from quinsy at the age of 21.

Eric attended Campbell College, Belfast from September 1925 until 1933 when he joined the Army. He was in the school Shooting VIII 1932-1933 and was a member of the British school shooting team that competed at the Canadian Ottawa Bisley, 1932.

In 1934 he went to the Royal Military College, Sandhurst and was gazetted 2nd Lieutenant, to the 1st Battalion, Royal Ulster Rifles (R.U.R.) in 1935.

Eric served with his battalion in Hong Kong & India. When serving overseas he earnt his unfortunate nickname, "Killer" Johnston. How he got this name is explained in the book "The Rifles are There" by David Orr & David Truesdale: "This had come about when a sentry had spotted what he believed was a sniper in a tree some distance from the camp. Johnston, a fair shot, had borrowed a .303 and brought down the sniper with a single shot. Unfortunately the sniper turned out to be anything but, and although a diplomatic incident was averted, the nickname had stuck." 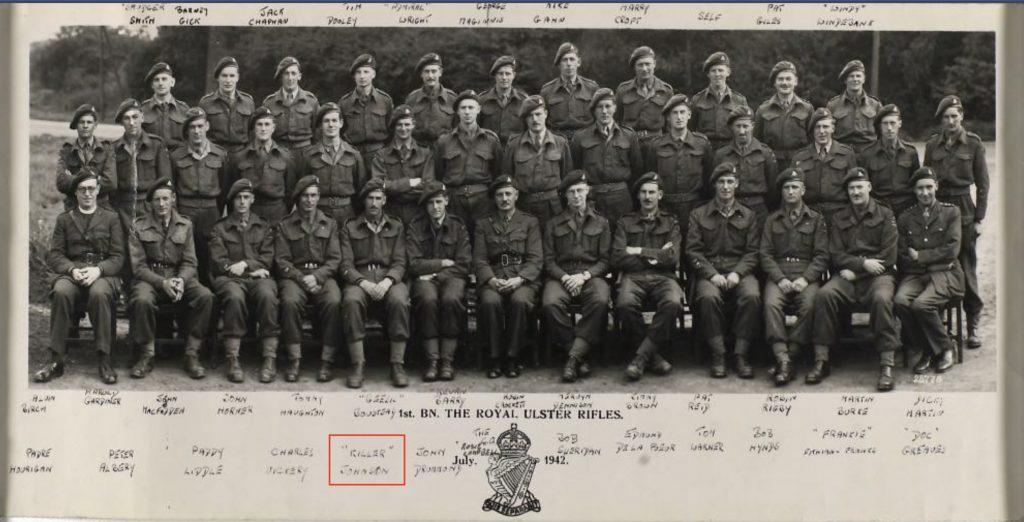 The battalion returned from India at the start of WWII & was assigned to the 6th Airborne Division commanded by Major-General Richard Nelson Gale. By 1941 he had risen to the rank of major. 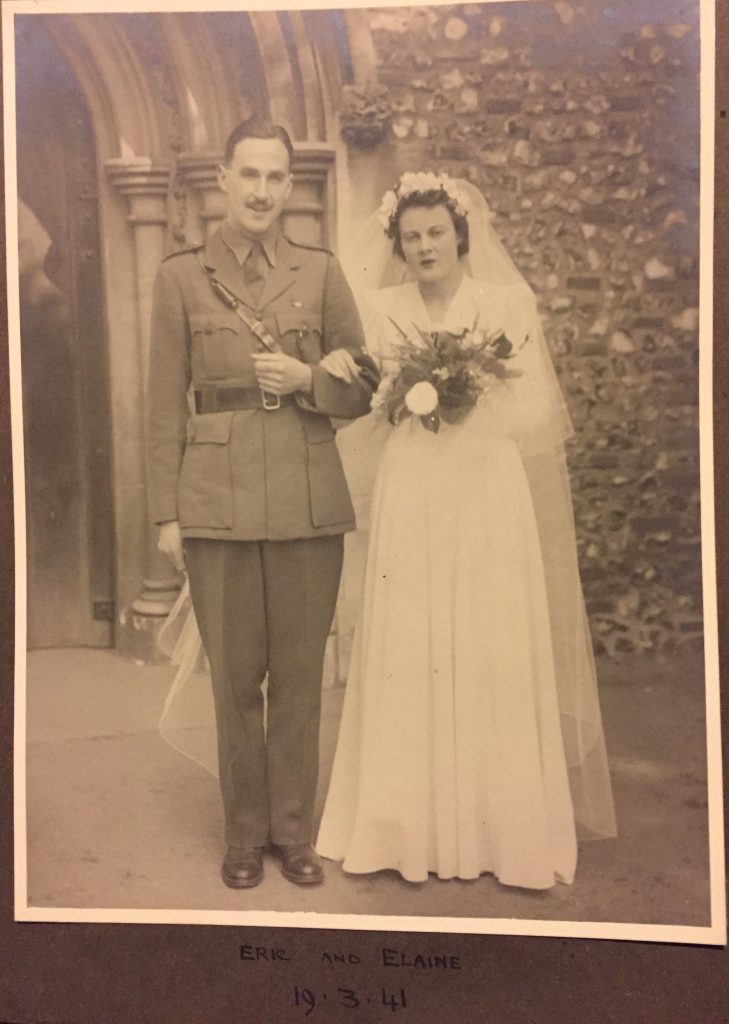 Eric & Elaine's son, Eric Bruce Cliff Johnston, was born shortly after D-Day while Eric was in France, having landed there on D-Day, 6 June 1944 with the Battalion gliders as part of the 6th Airborne Division. This Division was responsible for defending the left (eastern) flank of the main D-Day Normandy beach landings, initially in the coastal area between the River Orne & River Dives.

The landing area was close to the village of Ranville and had been secured, together with the important Pegasus Bridge over the Caen Canal & River Orne, during the early hours of D-Day. The 1st Battalion R.U.R in about 50 Horsa gliders landed at zone N at about 2100 hrs & dug in around the village of Ranville. Battalion HQ was established in a farmhouse at Le Bas de Ranville. The landing had been a complete success with just one Rifleman missing at this stage. During these initial stages of the invasion Eric was in command of “S” Support Company

On 7th June C Company went to a small hill feature overlooking Longueval & St Honorine while the rest of the Battalion went to take the village of Longeval which they succeeded in doing without any opposition. The Battalion HQ was set up in Longueval & then A & B Companies set out to capture St Honorine with covering fire provided by C Company. The operation was unsuccessful due to the strength of the enemy positions in St Honorine & C Company received a number of casualties from incoming mortar fire. All three Companies withdrew to Longueval.

Defences were improved & Longueval became the Battalion base. Further unsuccessful attempts were made to capture St Honorine & also Colombelles as well as defending Longueval from several attacks. On the 9th June Eric was wounded but remained on duty.

During the first few weeks of the campaign, while the 6th Airborne Division defended the left flank of the main invasion force on the east side of the River Orne, there was a policy for the various battalions to change positions at suitable times. So on 14th June the Battalion was relieved from Longueval & sent to Breville where they took over from the 12th Parachute Battalion. There had been previous heavy fighting at Breville, but the enemy had now withdrawn to the surrounding area.

On the 27th June the Battalion moved to a Brigade reserve area. On the 5th July the Battalion was moved to Le Mesnil to relieve the 12th Parachute Batallion. On the 6th July Eric accompanied the C.O. on a visit to the Company HQ of the 2nd Battalion R.U.R. who were part of the main seaborne landings at Sword beach.

On the 7th July Major Hynds, the commander of C Company was wounded, & Eric took over command of C Company. The Battalion stayed in Le Mesnil until the 21st July carrying out patrols, fighting enemy positions in the area & defending Le Mesnil from enemy attacks. The battalion was relieved by 12th Devonshire Regiment &
moved back to the Brigade reserve position.

Then at the end of July the Battalion relieved the Ox & Bucks in the area of Chateau St Come between Breville & Le Mesnil. On the 12th August the battalion were relieved by the Princess Irene Netherlands Brigade & sent to a rest area at Colleville sur Orne (now, since the end of WWII, called Colleville-Montgomery) near the coast to the west of the Caen Canal.

On the 17th August the enemy were beginning to retreat from the 6th Airborne Division’s eastern front line & the Battalion were ordered to advance along the coast road towards Caburg as part of Operation “Paddle”. The route involved negotiating enemy laid minefields & roads cratered by Allied bombing raids. The enemy still had a strong fortified presence in Caburg & the Battalion dug in around the outskirts in Le Homme & Les Panoramas. Orders were to engage & contain the enemy, but not make any attempt to take Caburg.

On 20th August the Belgian Brigade Group took over the Battalion’s positions & the Battalion moved on by troop carrier to Troarn & then marched to a laying up area at Lieu St Laurienton .

22nd August the Battalion advanced via Vauville to Deauville. There was no resistance in Deauville with the enemy having retreated to Trouville on the other side of the river Touques. The Belgian Brigade had also taken up positions in Deauville a short time earlier & the Battalion deployed to various locations around the town. Battalion HQ occupied the house previously used by the German commander, A Company deployed towards Touques railway station, B Company to Vieux Deauville & C Company to an area in Rue Hoche near the junction with Rue Victor Hugo. By this time in the campaign, Eric was the Commander of C Company.

At about 19:30 hrs Eric was with some of his officers & men outside the house on the east side of Rue Hoche & on the corner with Rue Victor Hugo. There were enemy artillery gun positions on the hills above Trouville on the other side of the river La Touques, but the Rue Hoche houses prevented the soldiers from being seen by the enemy. Some French civilians arrived with flowers & refreshments for the liberators, but were spotted by the enemy who fired shells which landed in the road at the centre of the junction of Rue Hoche & Rue Victor Hugo. The French civilians were killed instantly and some of the flying shell shrapnel severely wounded Eric and some of the other soldiers.

A local French doctor, Dr G D Beauregard, returning from a first aid post to his house at 79 Rue Victor Hugo, dressed Eric’s wounds & arranged for an army ambulance to take him to the local hospital. Eric died on arrival at the hospital. He was buried in the Tourgeville Military Cemetery (grave 4.G.4).

Eric wasn't the battalion's only fatality as a result of the shelling that day. Eric's batman, Rifleman Scanlon was also severely wounded and taken to the local hospital where both his legs were amputated. But he died in hospital the following day and is buried in the grave next to Eric (4.G.3.). Several other soldiers were also wounded, but not fatally. They included a platoon commander, the CSM, several riflemen & 2 wireless operators.

However, Eric's father knew very little about how his son had died. So, in April 1946, he wrote to the Association France-Grande-Bretagne (F.G.B), Caen to find out more about the circumstances of his death. They responded very quickly and said they had asked the local doctor, Dr Beauregard, who was an eye-witness to events on that day, to reply with the details.

"I may mention that the graves are the object of the F.G.B. Association's constant solicitude and my committee, feeling sure that the elations of the gallant deceased would be glad to know that their sons are neither forgotten nor lonely and that their graves are regularly cared for had arranged, some four months ago, with the instant and eager cooperation of the headmaster of Deauville school, that the children of the higher forms, under the supervision of their teachers, should go to the cemetery three times a month and attend to the tidiness of the graves leaving a pious and grateful homage of flowers"

The letter then continued:

You will be pleased to know that the Trouville-Deauville Section of the F.G.B. Association held a gathering of it's members and general public on Friday 26th April at which we asked the audience of about 600 people to participate in our committee's desire to replace the actual wooden crosses which are showing signs of decay by stone or cement crosses which, while ensuring a more fitting permanency, will at the same time, be a testimony of the affection and deep gratitude in which those who so gallantly gave their lives for our independence are held by all of us here. Our appeal was received with unanimous approbation and innumerable marks of sympathy and approval." 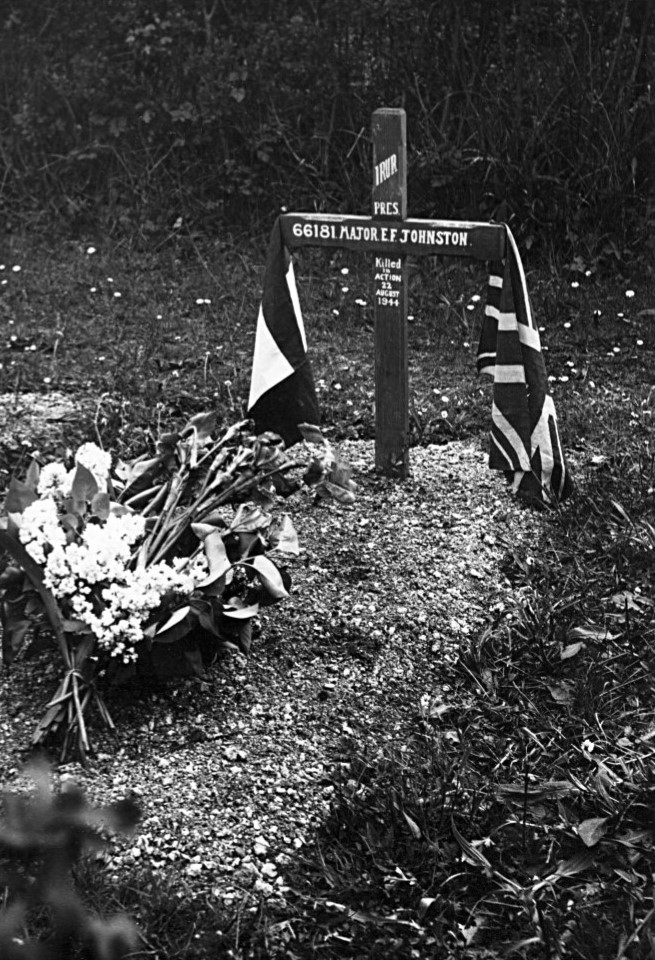 On 03 May 1946, they sent a translation of the letter written by Dr Beauregard with information about what happened on the day of Eric's death. We believe the reference in the translation to an American ambulance and the Canadian Commando may be mistaken. 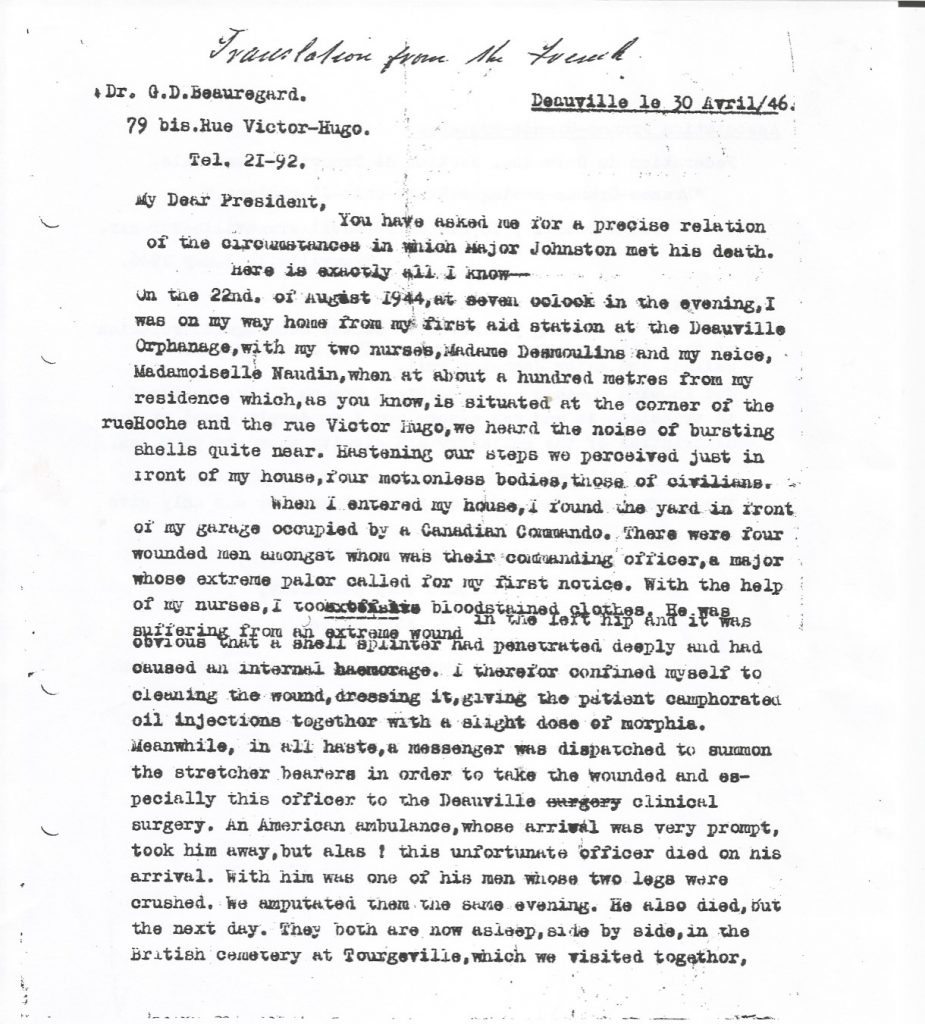 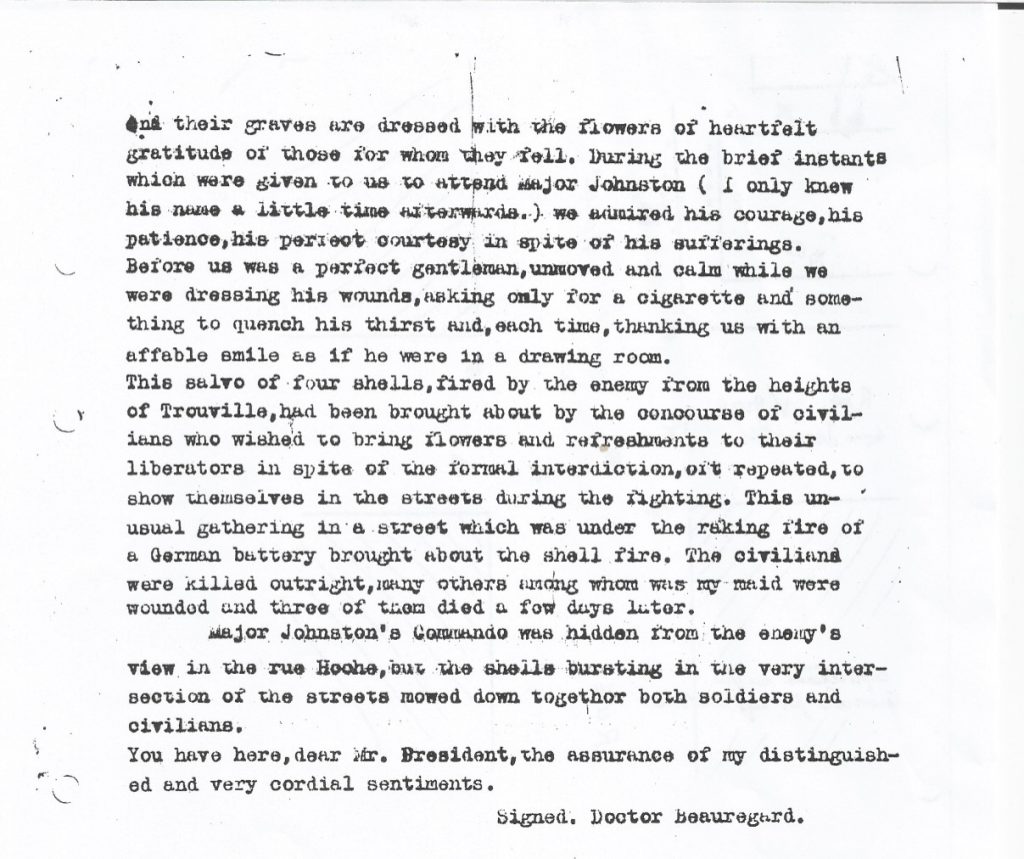 They also enclosed a hand-drawn map to show where the incident happened. 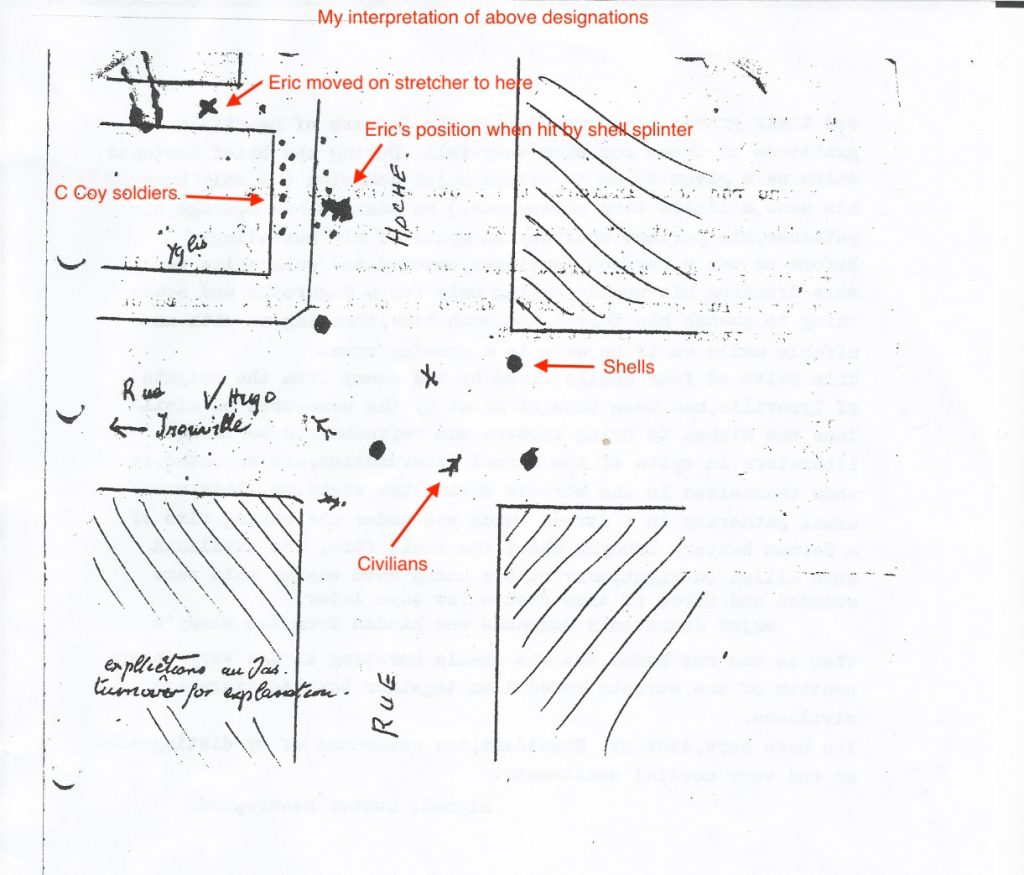 On a recent visit to Normandy, we went to see Eric's grave. 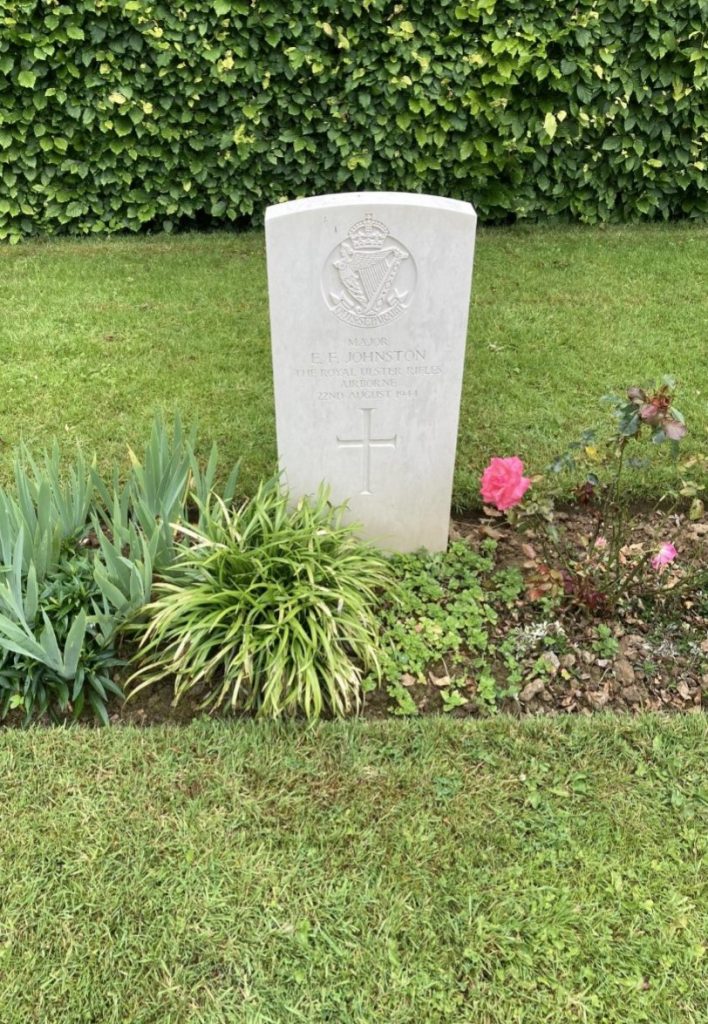 We also went to the junction of Rue Victor Hugo & Rue Hoche in Deauville where he was wounded. At that junction there is now a memorial plaque on the wall of one of the corner houses which lists the civilians who were killed in this incident. 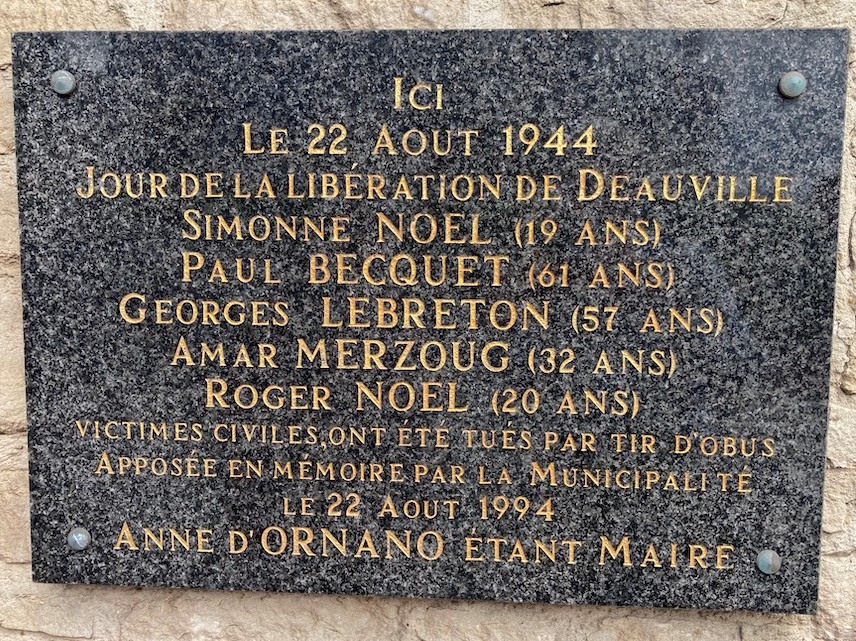