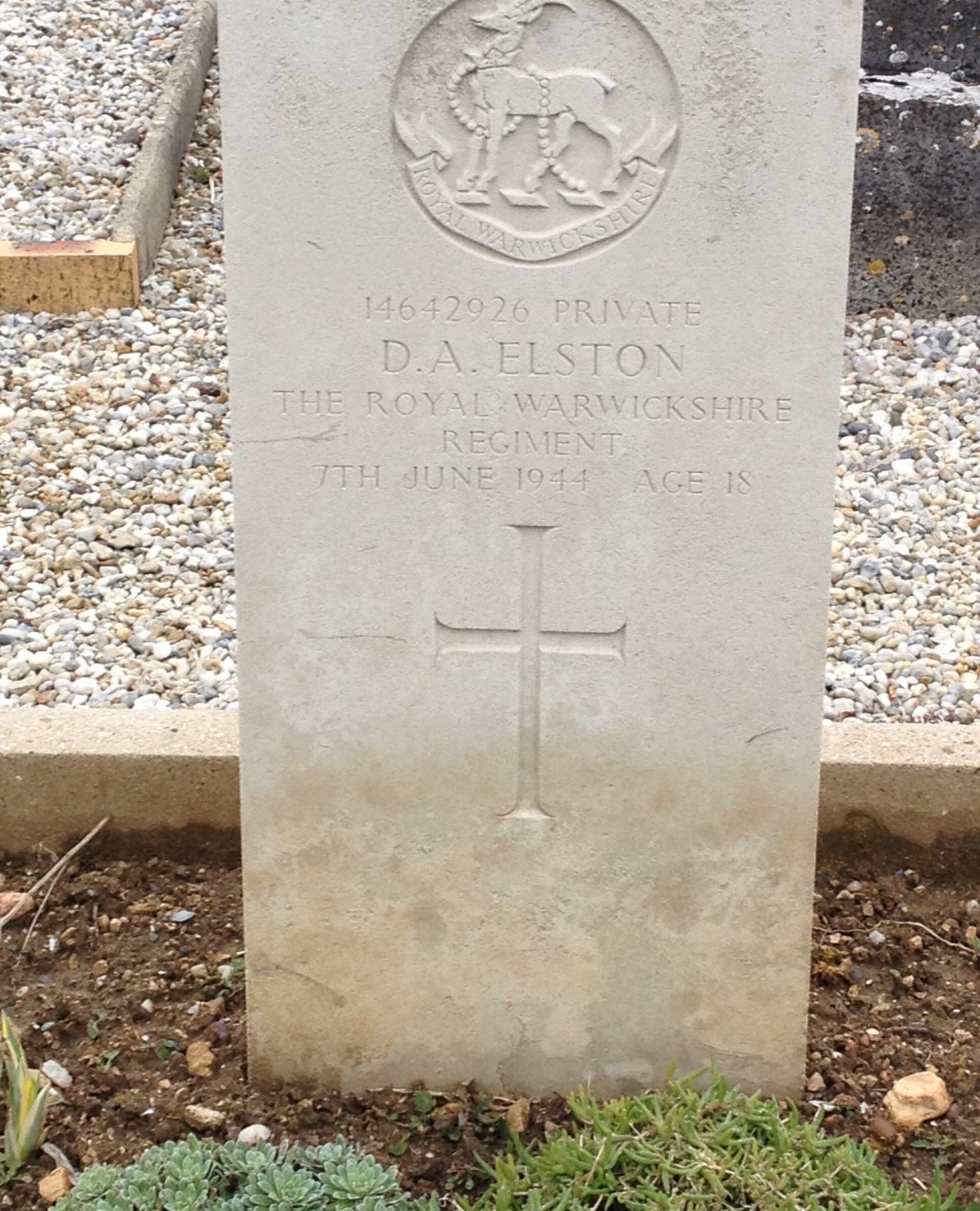 The story and photographs are shared by the Trust with kind permission from Sandra Kaveney, whose father served with Donald Elston

My Father, Malcolm Charles Yates, and Donald Elston served with the 2nd Battalion, Royal Warwickshire Regiment. After landing on Sword Beach they got to Benouville. With a lull in fighting they were standing in what dad described as a recessed shop doorway.

Donald’s wife had given birth to their son in the March 1944 and my mother had given birth to my sister on the 30th April 1944. Dad had managed to get home for a day and see his daughter. However, Donald had not been allowed home to see his son. Donald was 18 and my father was 19. Whilst talking about their new born children a shot rang out and Donald dropped to the floor.

My father leapt through the shop window and managed to get away. He returned later as he was not sure if Donald had been killed or not. His body had been taken and dad found him laid in a passage and the French had placed flowers on his body.

Dad re-joined the regiment and seemed to recall going over the bridge and was eventually wounded himself in Lébisey Wood. He was shipped back to the U.K. and ended up in Carlisle hospital where he had shrapnel removed. Once he had recovered he re-joined the Warwick’s and fought with them through France, possibly Belgium and in Holland into Venray and a battle in more woodland in Overloon.

At the end of hostilities, as he had signed up in April 1941 for 6 years as a regular, he did not come home but went to Palestine. He came home in 1947 and spent the next 50 years with Donald on his mind in the knowledge that Donald’s son would never know that his father was talking about him and thinking about him just before he died. Dad never made us aware of Donald or the circumstances of his death, we think he found it too distressing.   He did, however, eventually tell us the story and during a visit to Normandy with our parents we looked for Donald’s final resting place. We took dad back to Normandy a few years before he died to find Donald’s grave and pay our respect.

We went to all the cemeteries but could not find him. With the help of technology and the Internet we eventually found that Donald was buried in Benouville churchyard. But by this time my father had also passed in away 2004. My husband and I went to the church in Benouville and paid our respects.

After my dad passed away, we found this photo in his belongings which he had marked to show where he was in the group photo. Donald could be in this but we have no idea. 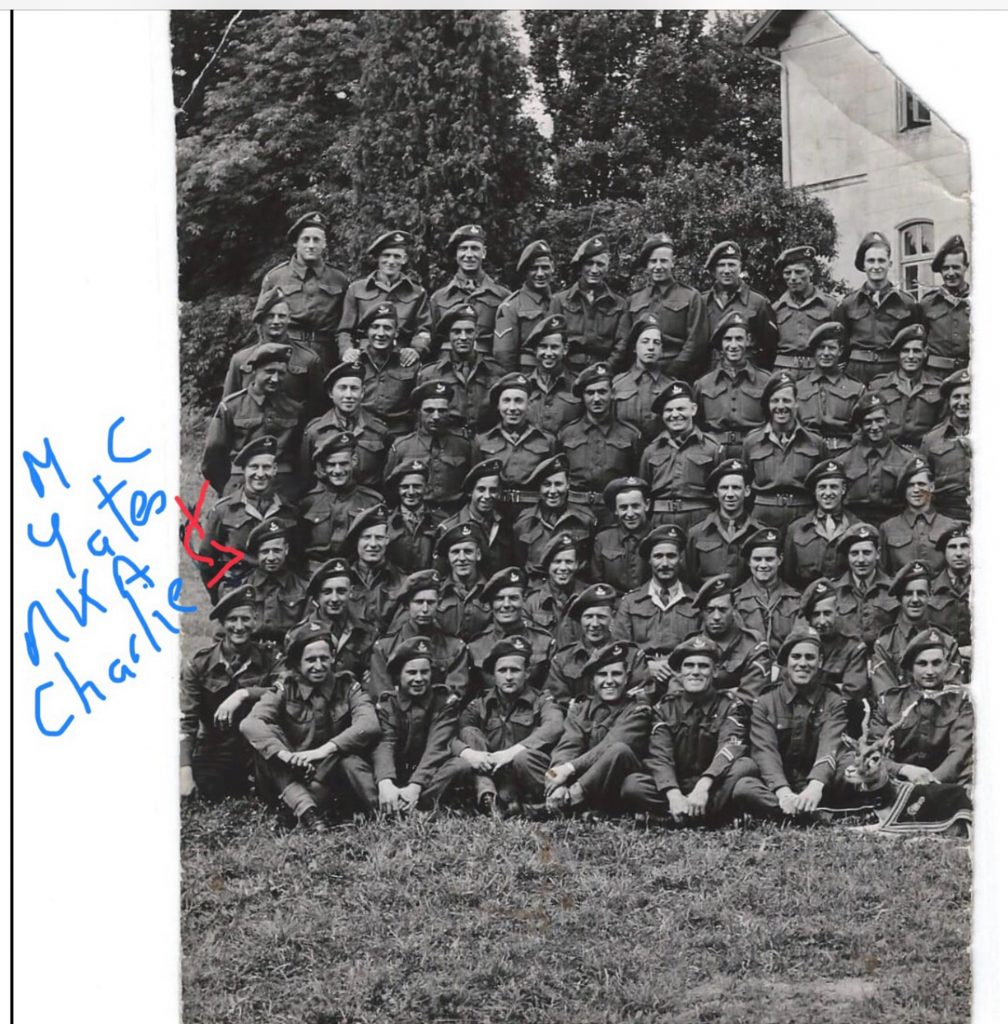 We also found this photo (below) of the 2nd Battalion taken. Dad is in the second row from the front (first row standing), 8th from the left. I look at this and wonder how many didn’t come home. 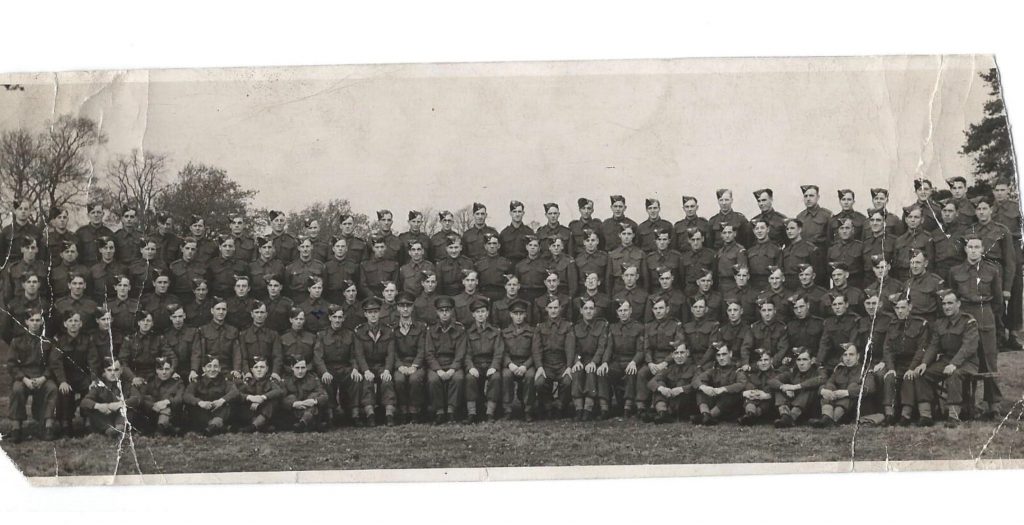 My sister and I felt, in dad's memory, that we needed to find the son of Donald Arthur Elston born in March 1944. We found a son, named Arthur Donald Elston, who was born in Nottingham in the first 3 months of 1944. With the help of the Internet etc we found the son but he had unfortunately passed away. We were given an address of a daughter of Arthur and I wrote explaining my reason for writing but she never replied. There was no more I could do.

Whilst we never met Donald we do feel as if he is one of the family.  He will always be part of our history.

In June 2022, my husband, John, and I attended the 6th June ceremony and we found Donald listed on the British Normandy Memorial which is amazing and extremely impressive. 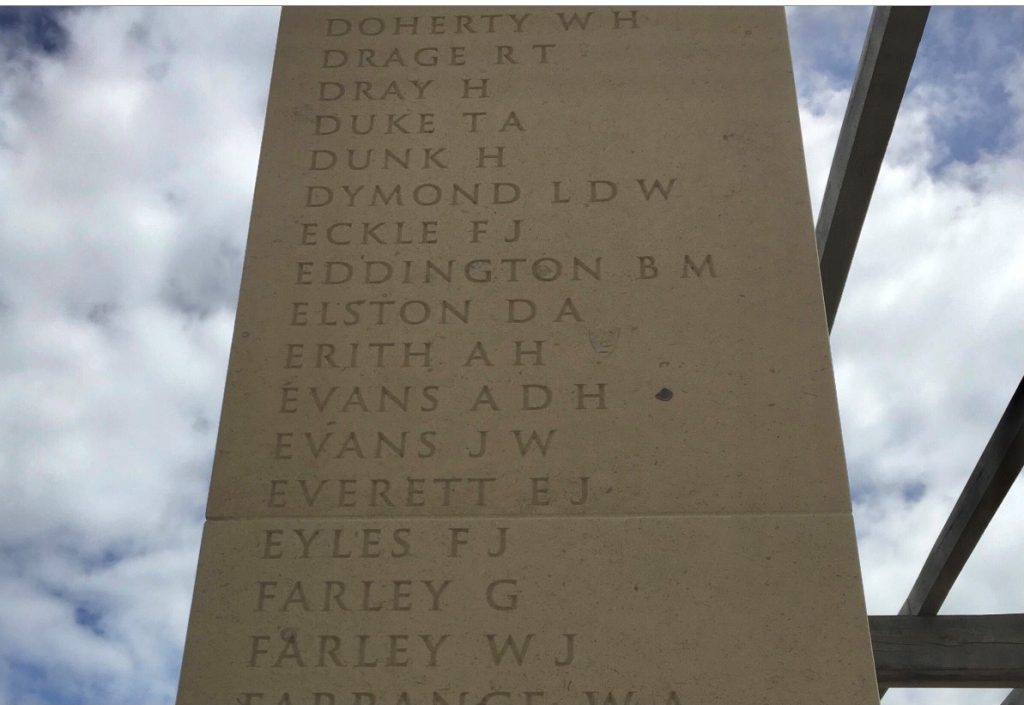