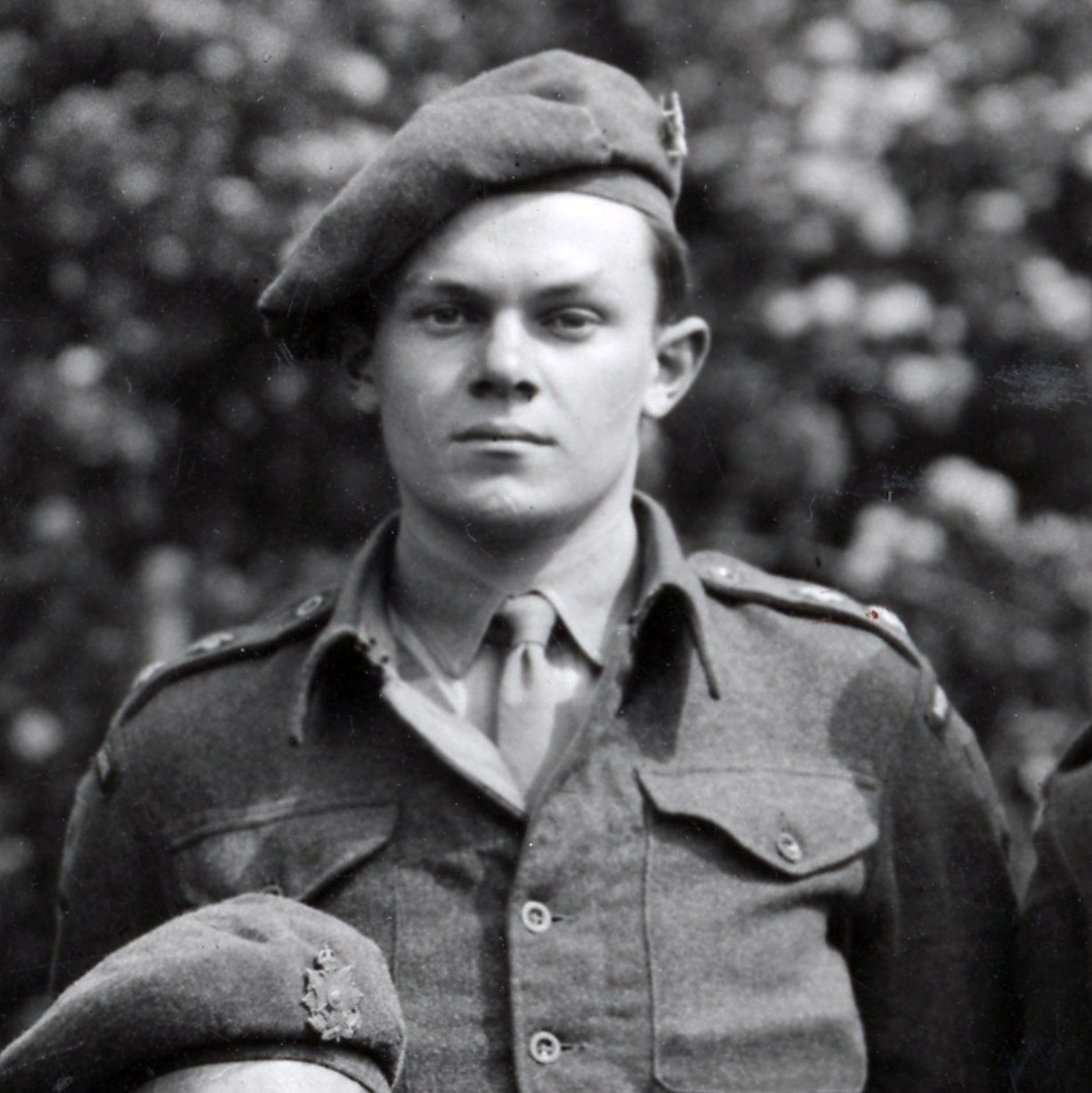 This story and photos are shared by the Trust with kind permission from Lloyd Scott, Battlefield Historian and Ian Andrews, son of Peter Andrews, close friend of Geraint.

While I am not a family member I have spent the last 10 years looking into David Rhys Geraint Jones (known as Geraint Jones) who has gone largely unknown. I was born in the same Welsh town as he and have been a fan of his Poetry as he was well known for it locally. Initially the search was only for a photograph of him as there was nothing at all about him in any book, museum or online.

The search was unsuccessful until this year when I found the daughter of a woman he was sweet with in Wales. She had kept a newspaper clipping announcing his death and it had a photo. She also had the last letter he wrote from Normandy on June 22nd. After that the hunt snowballed and I was able to make contact with an officer, Peter Andrews, he served with and the same man who he shared a slit trench with in Normandy for the time he was here. I have also then since made contact with what is left of his family.

David Rhys Geraint Jones (known as Geraint) was born in Haverfordwest, Pembrokeshire on April 18th 1922. Educated at Haverfordwest Grammar School he would later go on to study languages at Cheltenham College and onto Trinity Hall, Cambridge to read Law.

In 1942 Geraint was called into service before he could complete his final exams. He went through OCTU at Wrotham Camp in Kent and in late 1942 commissioned into the RAC. Early 1943 he transferred to the 3rd Battalion, Monmouthshire Regiment, a Motorised Infantry Battalion that had recently joined the 11th Armoured Division as part of the 159th Infantry Brigade.

The brigade were based in the East Riding of Yorkshire and the 3rd Monmouthshires initially concentrated in the town of Beverley. They would move throughout June between Leven and Kingston-upon-Hull. In September 1943 they finally settled in the seaside resort of Hornsea and the HQ of the 159th Infantry Brigade was stationed at Wassand Hall just west of the town of Hornsea.

In February 1944 Geraint once again transferred, but this time to 159th Brigade HQ as a Liaison Officer. 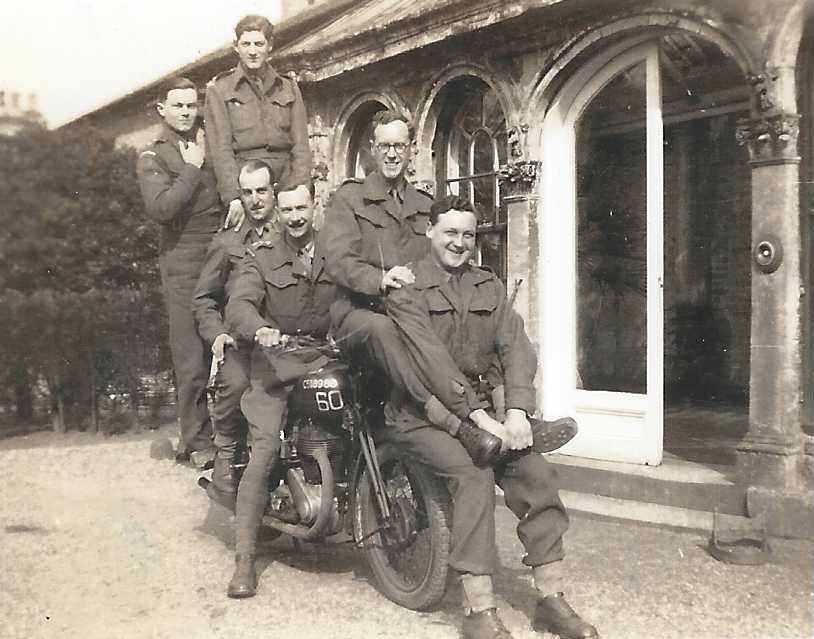 Left-Right: Lt Geraint Jones, Capt Solomon, Lt Lloyd, Capt Peter Andrews, Capt Fox, Lt Horwood. The photo was taken at Wassand Hall in Yorkshire between February and April 1944. The man in the saddle is his close friend at the time Captain Peter Andrews.

On 15 June 1944 he landed at Luc sur Mer and made his way to La Moulin Foulon outside Cully to a concentration area where they were held for just over a week.

This photo, taken between June 15th and June 25th was the last one taken of Geraint. It was taken as he took a bath in the field in the concentration area of the 159th Bde HQ between Cainet and Cully. 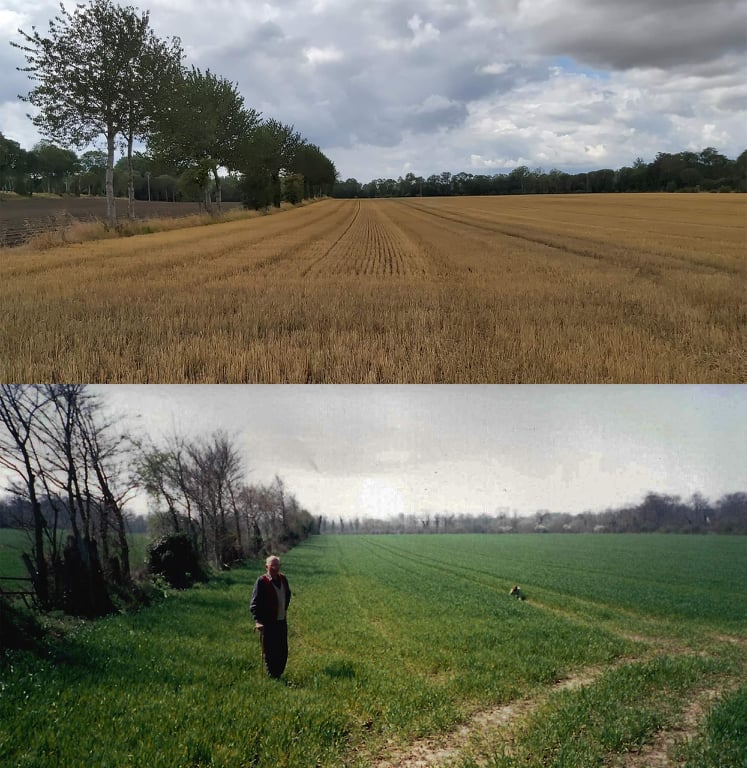 The other photo is a then and now between 1997 when Peter visited with his children and a few days ago when I worked out where the 1944 picture of Geraint was taken.  The son couldn't remember where it was other than it was just off a minor road. Using IGN aerial photos from the 90s, the shadows and sun position we matched it with the field.

On June 25th 1944 Operation Epsom is soon to be underway, Geraint and the 159th TAC HQ [Tactical Headquarters] have made their way to Mondrainville where they will operate from during the push for Hill 112. On June 28th 1944, C Company, 3rd Monmouthshire had become lost in the dark the night before and ended up in the village of Mouen. At that time the 12th SS and elements of the 21st Panzer division were counter attacking from the direction of Carpiquet and Caen inflicting devastating casualties on the company.

Geraint set off from Mondrainville in his Daimler armoured car to liaise with forward units. Between Mondrainville and Mouen there was a heavy German presence in the woods towards Tourmauville. At some point on his journey, likely with his head exposed out of the open armoured car, he was struck by a sniper's bullet and killed.

Today he rests in St Manvieu War Cemetery.  The epitaph upon his grave reads "Your Peace is Bought with Mine" - a line taken from his poem, 'The Light of Day is Cold and Grey"

Normandy Memorial Trust Additional Information: Lloyd Scott is the author of a book about Geraint, "Your Peace is Bought With Mine"  details of which can be found here