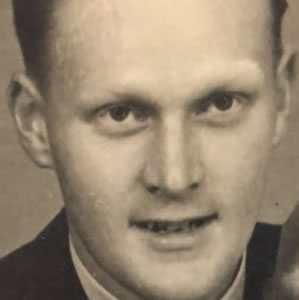 This story and photo are shared by the Trust with kind permission from Janet, sister of Cyril Stubbins and with research by Ben Mayne @BattlefieldBen

In 2019 Cyril's younger sister, Janet, visited her brother's grave and found out more about events on the day he was killed. Janet said that the family only ever had rumours of what took place on the night of the 6th June, they had never been able to confirm. Janet even said that after he should have landed they had no word on Cyril until February 1945. They believed he may have even not gone out to France instead going ‘AWOL’ as he may have been scared of what to come. They learnt that wasn’t the case. She said to me, “This will likely be my last visit to him.” 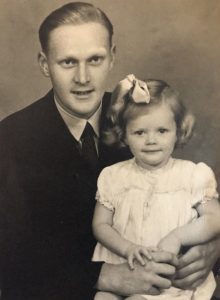 As LJ288 flew in over the Normandy coastline close to Cabourg it was hit by German anti-aircraft fire fire and went down on the outskirts of Dives-sur-Mer, not far from the Houlgate Battery. The flight was recorded as missing and it wasn’t until September 1944 that work began to try and identify the circumstances of the crash and the men who were onboard.

Janet's mother visited France a few years after his death and met a local mayor at Dives-sur-Mer who said a plane had crashed. She was shown trees still scorched and a gap missing where it was said to have come down. No other details were known to the family.

It was ascertained that it was flight EF268 and that it had come down, colliding with trees. All on board had died and the local French villagers had come to the crash site and buried the dead. Personal effects had been collected and later returned so they could be passed back. The men were exhumed in February 1945 and now all lie at rest in the La Delivrande War Cemetery.

Cyril is buried in a row that contains all the men of flight EF268. Janet made her pilgrimage to visit him and then all information that could be found was given to her later that night. She says she finally has closure on her brother’s death. All the stories the family had said over the years had now been found true and that he had died carrying out a brave act. She had never forgotten her brother, 75 years on.