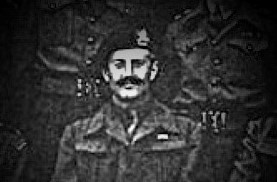 In August 1944 his family announced he was Missing in Action in but it wasn't until March 1945 that they confirmed he had been Killed in Action.