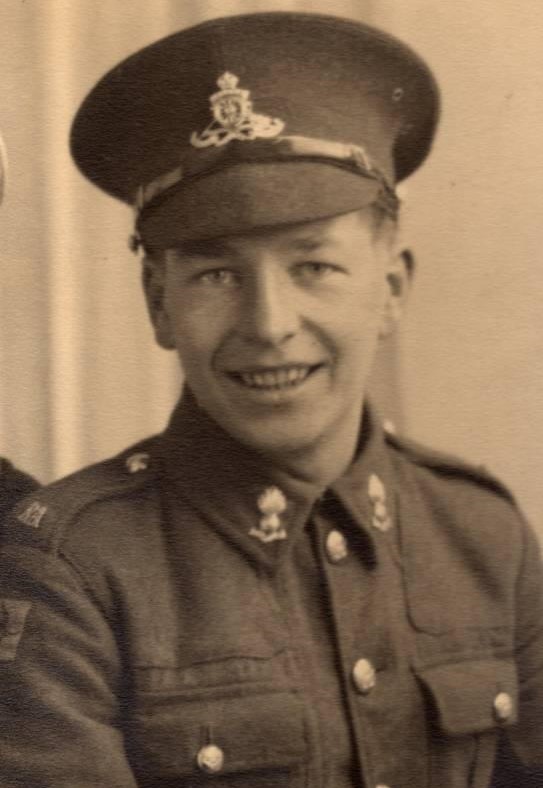 This story and photo is shared by the Trust with kind permission from Chris Chettle, nephew of Albert Leslie Chettle

Albert's mother, my Grandmother Lucy, gave me Albert's his letters and photographs and my Father, now 90 years old, is Albert's youngest brother and has told me lots of stories about Albert. Over recent years I have also researched Albert's movements in Normandy.

Albert had two half-sisters Lily and Edna (my Grandmother was a WW1 War Widow) and two younger brothers, Jack who was also in Normandy in the Royal Artillery at the same time as Albert and my father, Tony who served in the Royal Marines from 1947 to 1961. Albert was married to Charlotte. Albert and Lottie, as she was known, had no children and Lottie later re-married and lived in Glasgow. This is them on their wedding day. His mother, Lucy, is far left as you look at the photograph. 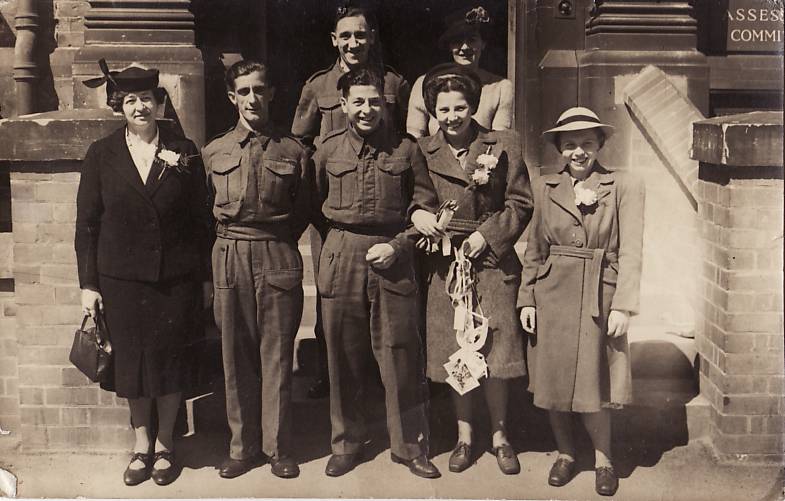 The letters he sent home help to tell his story. The first letter,  dated June 16th 1944, was written to his mother and step-father. He is trying to reassure his Mum that he is OK and she should not worry and he references the Japanese being bombed and he also uses the phrases of “Chin Up” and “Keep Smiling”. These recur throughout the letters.

He wrote again to his mother and step-dad on 29th June. We know from the Official War Diary of 144 Battery that he had just passed through Cheux to La Byude. The battery were supporting the Royal Scots Greys and the 3rd County of London Yeomanry. In this letter again the phrases of "chins up" and "keep smiling" appear. He would have known the worry that his Mother was going through. He also mentions his brother, Jack, also in Normandy at the same time. 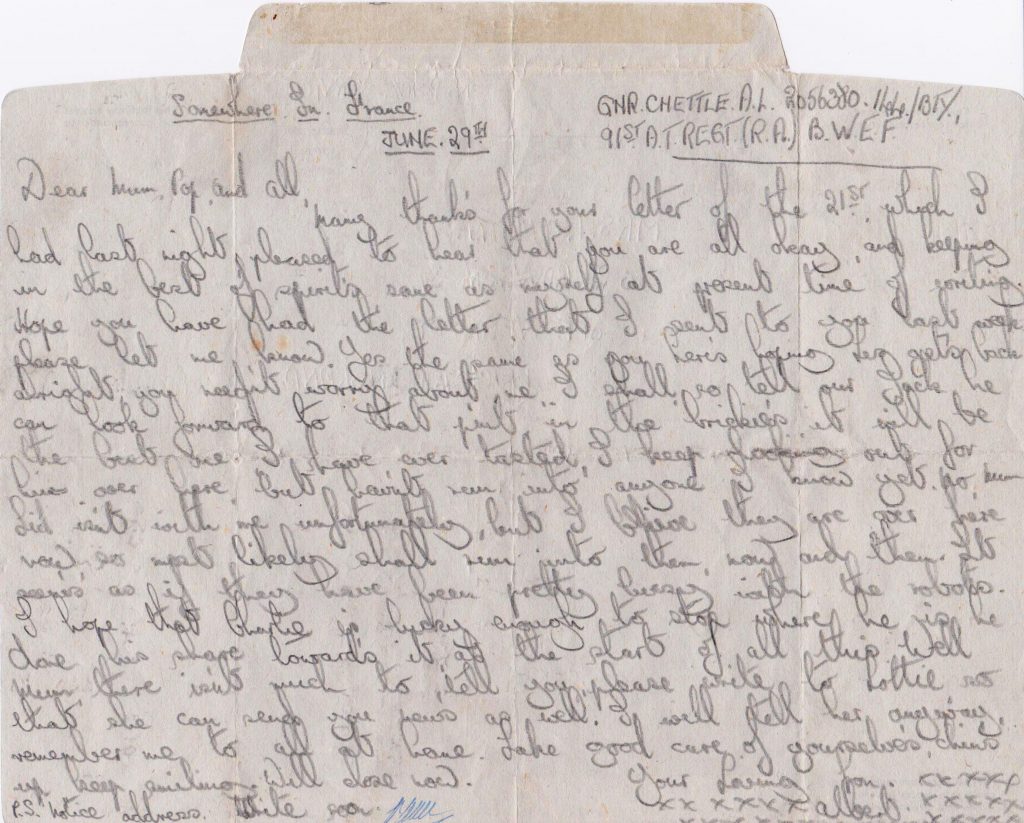 "I shall so tell our Jack he can look forward to that pint in the brickies it will be the best one I have ever tasted, I keep looking out for him over here but haven’t run into anyone I know yet. No Mum Sid isn’t with me unfortunately, but I believe they are over here now so most likely shall run into them now and then. It seems as if they have been pretty busy with the Robots.

In this letter Albert references “Robots” that I believe to be Doodlebugs. The Bricklayers Arms or “Brickies” as Albert referred to it is also for the first time mentioned  - this was the family local on Welford Road, Leicester. And we believe Sid was a friend of the family.

He wrote his final letter on July 7th 1944, 3 days before he was killed. There is concern over missing letters he had sent home.  The “Brickies” is again featured as well as chins up and keep smiling, clearly there has been a question regarding his battery and he replies “yes we are Anti Tanks now”. He also knows that brother Jack is in Normandy.

Many of these missing letters arrived after Albert was killed and his younger brother, Tony, would try to get to the post before his Mother and destroy them as they upset her so much. 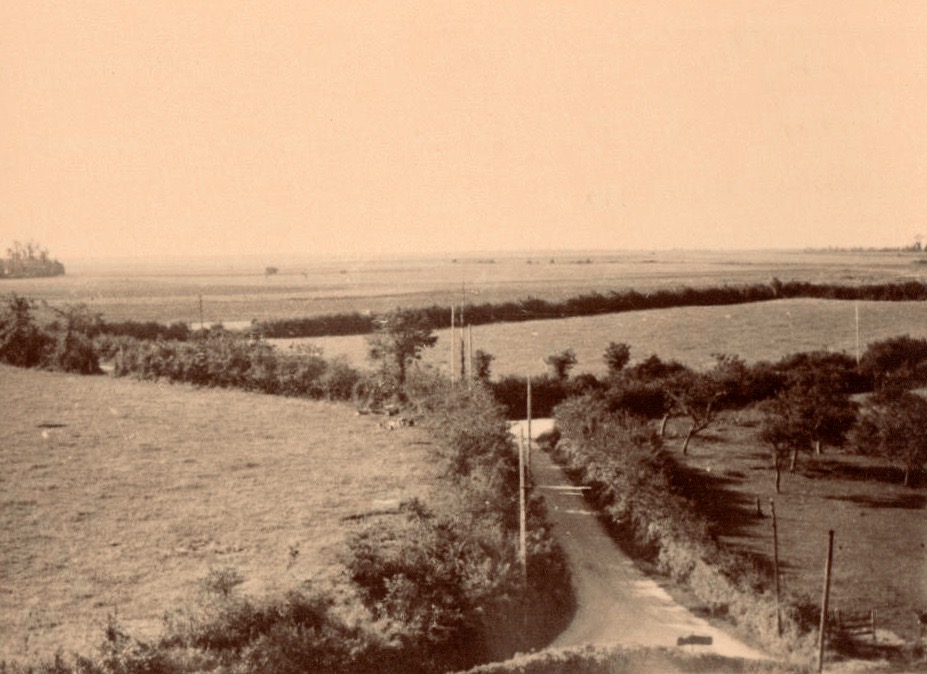 This photograph is an original and taken in September 1945 by an officer in the Duke of Cornwall's Light Infantry.

I received your letter last week in which you asked me to give you more particulars about your brother's death, so that you could write to your Mother & put it in your own words.

Your brother was in the ammunition section of my troop on the day the battle for Hill 112 (which is south of Caen) had begun, he had come up in the truck with some ammunition. When the truck arrived in the battery lines all the men got out & started digging slit trenches. About midday they were told that a meal was ready & your brother had just climbed into the back of the truck for his mess tin when it received a direct hit from a mortar & caught fire. One of our Sergeants who was standing by saw that Gnr Chettle was in the truck & that he had fallen to the floor. Regardless of his own safety, this Sergeant rushed into the truck & dragged him out but by this time he was dead.

I was very sorry to hear the news of his death, for even though I had not known him for long I could see that your brother was what we call a “good lad” & a good worker, & had he been spared he would have proved himself a most useful member of the troop. He got on very well with the other fellows & that itself says a lot.

You will perhaps be gratified to know that the Sergeant who attempted to save your brother's life has since been awarded the M.M.

If there is any more information or help you require you have only to write to me or I shall be pleased to help you in any way I can.

Jack later found out he was himself close by Fontaine Etoupefour on July 10th 1944. Lieutenant Dickson also wrote to Albert's wife:

By now you will have received official news of the death of your husband who was in my troop. It is difficult for me, an unmarried man, to realise what a great loss you have sustained, and all I can do but offer you, in all sincerity my heartfelt sympathy. I had known your husband for only a short time, as he was posted to us from his former regiment just before we left England, but in that time I discovered that he was a quiet unassuming man and an excellent and conscientious worker and in my opinion is borne out by the other men in the troop with whom he had soon made friends.

He met his end purely by accident when we were in a position that was being heavily mortared and I can assure you that he suffered no pain. I was not on the spot myself at the time, as we were pinned down on another flank and it was not until some time later that I learnt what had happened.

His body is laid to rest beside an Officer of the Regiment who was killed that same day and both received a decent Christian burial.

If there is anything I can do to help you in any way, you have only to ask me and I shall do my best.

Once again, please accept my feelings of deepest sympathy.

This next letter is probably one of the hardest letters to read and I can only assume it was incredibly hard to write. It is dated 24th July 1944 and is from Jack to his mother who he knows will be distraught and worried for his safety. In this Jack tries hard to console his mother. He references his brother Tony and cousins Pat and Janet and then he uses the phrases of “Keep the big smile for me & the world to see” and ends with “Keep the old chin up”. 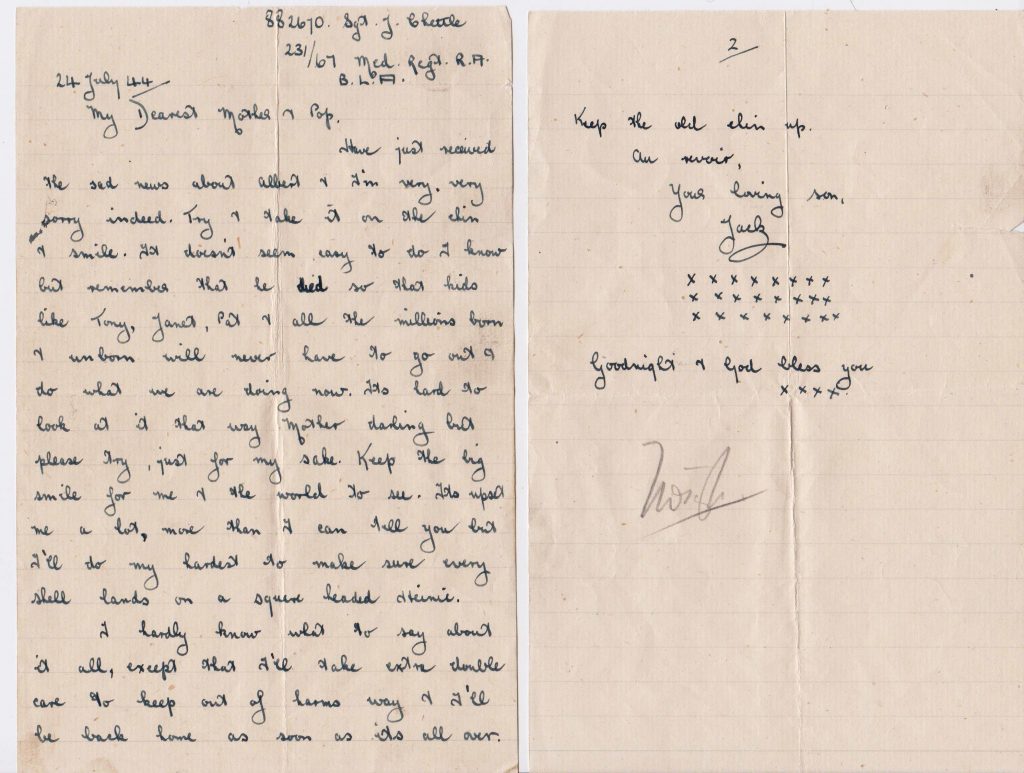 I have just received the sad news about Albert and I’m very very sorry indeed. Try and take it on the chin and smile. It doesn’t seem easy to do I know but remember that he died so that kids like Tony, Janet and Pat and all the millions born and unborn will never have to go out and do what we are doing now. It’s hard to look at it that way Mother darling but please try, just for my sake. Keep the big smile for me and the world to see. It’s upset me a lot, more than I can tell you but I’ll do my hardest to make sure that every shell lands on a square headed Heinie.

I hardly know what to say about it all, except that I’ll take extra double care to keep out of harms way and I’ll be back home as soon as it’s all over.

Keep the old chin up.

The last line of “Goodnight and God Bless” is written on the headstone of Albert Chettle in Bayeux War Cemetery.