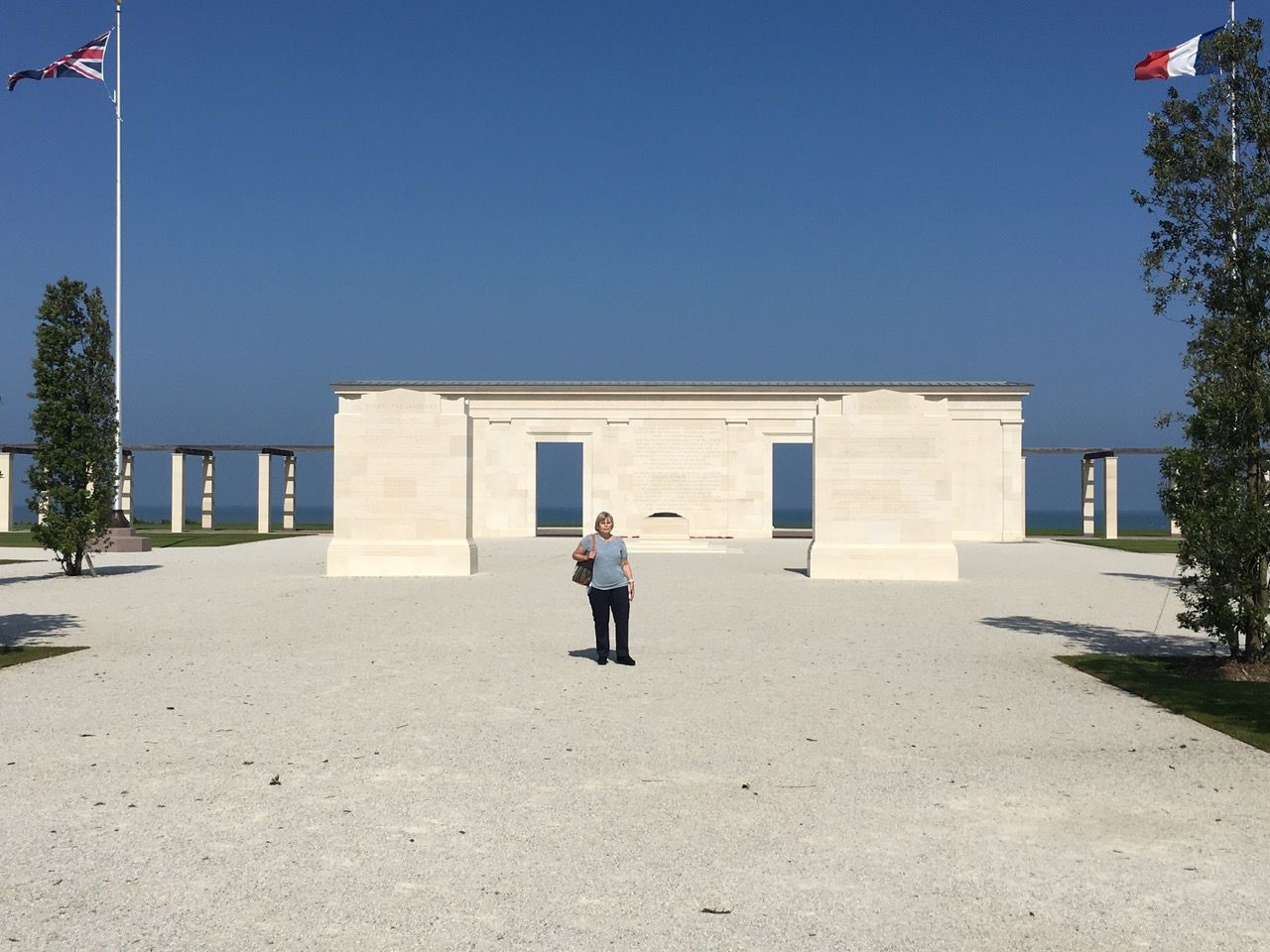 This story has been shared with the kind permission of John and Mary Holland.

Mary Holland, niece of the Casson brothers Robert and Joseph, has been on a decades-long mission of uncovering more about her uncles who died during the events of D-Day.

With the help of her husband John, the service records of his WW2 veteran Aunt Mary Hanson, and the official researcher of The Normandy Memorial Trust, Mary has undergone a puzzling journey with several twists and turns, ultimately culminating in a seven-day long trip to Ver-Sur-Mer in September 2021.

We spent the afternoon at the memorial to familiarise ourselves to the site and take photos. What a magnificent and impressive structure was to unfold before us as we walked along the memorial walkway, with views over Gold Beach, a poignant reminder of events that took place in 1944, certainty a fitting tribute to the fallen.

We have been watching the development of the memorial ever since a webcam had been installed by the main contractor, Eiffage, back in January 2020, but what was presented to us far exceeded our expectations, such craftmanship and what a fabulous location, landscaped on three sides with an open aspect to the north and the sea breeze. Seating for quiet reflection was available throughout the site.

We viewed the names of Robert and Joseph Casson and familiarised ourselves in readiness for a return visit. The weather was glorious just to make everything perfect.

After breakfast we first made our way to Ryes Cemetery, Bazenville, visiting the graves of Robert and Joseph Casson. Ryes stands alone, surrounded by fields to three sides, so peaceful and only our second time at the cemetery: the first being in the 1990’s. We felt privileged and fortunate, albeit with some sadness, being able to lay two wreaths, especially for Robert with his newly erected headstone.

Later we returned to the British Normandy Memorial to spend the afternoon, initially to lay two more wreaths and then take in the full content of the site. This including locating the names of seven names for “Chorley and District in WW2” that appear on columns 24, 144, 148, 193, 203, 304 and 307. Seeking out Sidney Bates VC on column 265. Another name on column 222 (privately for his son, who isn’t currently able to travel). Rex John Whistler column 194, who is connected to the “Rex Prism” at Salisbury Cathedral. His fascinating story is yet to be published by the Trust. Plus others whose names have featured on the British Normandy Memorial website.

Whilst there, we came across Nicholas Witchell (Trustee and BBC royal correspondent) and Sacha Marsac from the Normandy Memorial Trust, examining the weathering damage to the flags. Once again, the weather was amazing and added to the peace and tranquillity of both the cemetery and the memorial.

We made for the Juno Beach Centre at Courseulles-sur-Mer – a Second World War Museum and Cultural Centre, opened in 2003 by the Canadians. We spent several hours looking at the exhibits, visiting two nearby German bunkers and walking out on Juno Beach.

Later we returned to the British Normandy Memorial to meet up with French tour guide Corinne Joimel, whom we first met in March 2018. It was good to be able to personally thank her for taking flowers to the graves of Robert and Joseph during the pandemic. 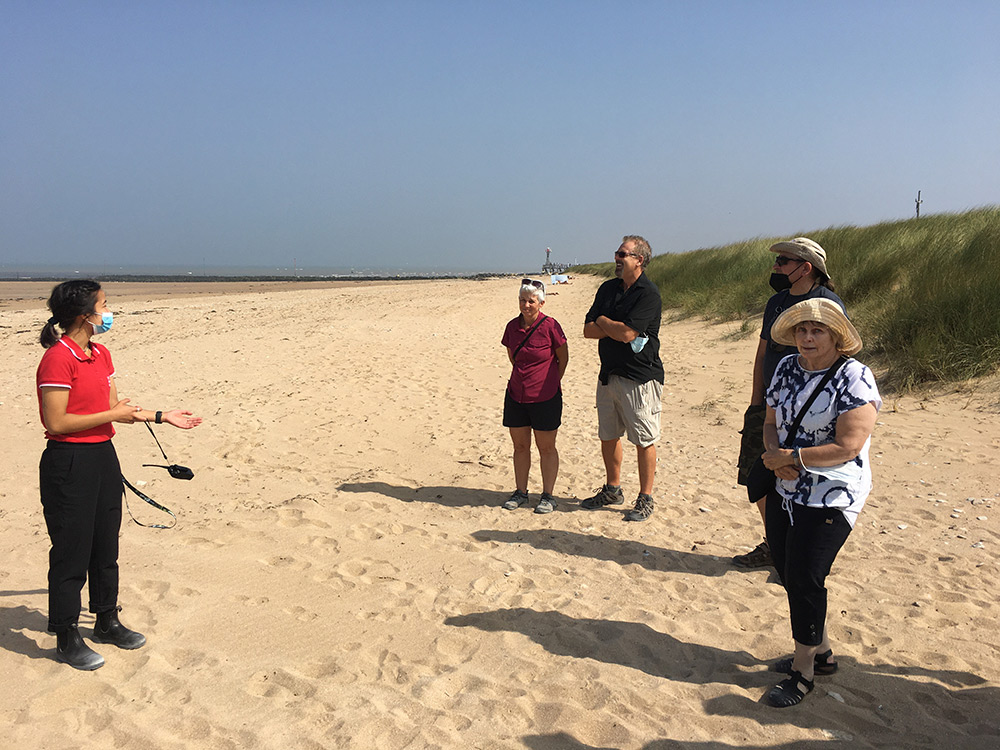 On this day we ventured inland, first to the cemetery at Jérusalem. There we walked around all 48 graves, including those of Chaplains Gerard Nesbitt and Cecil James Hawksworth whose stories feature on the British Normandy Memorial website. Twenty four of the graves are soldiers from the Durham Light Infantry (DLI)

Later, we arrived in the town of Tilly-sur-Seulles to visit the Musée de la Bataille de Tilly-sur-Seulles. We heard more about this museum via the Manchester Military History Society at a presentation given to them by French amateur historian Stéphane Jacquet. The town changed hands 23 times over the course of a few days and was the first to be completely flattened. The images and detail in the museum are amazing but serve as a sober reminder of the true cost of conflict.

On our return we noticed a memorial at Crépon to the Green Howards, which we decided to revisit the next day.

First, we called at Crépon to view the memorial to Stanley Hollis VC and the Green Howards, then a brief stop at Ryes before going on to Gold Beach at Ver-sur-Mer and the Gratitude Memorial to the troops who started the liberation of Normandy and France.

After lunch we returned to the British Normandy Memorial for more photographs and to “road test” the Memorial App, including playing audio No. 10 (General Charles de Gaulle) for some grateful French visitors, which they found very emotional. 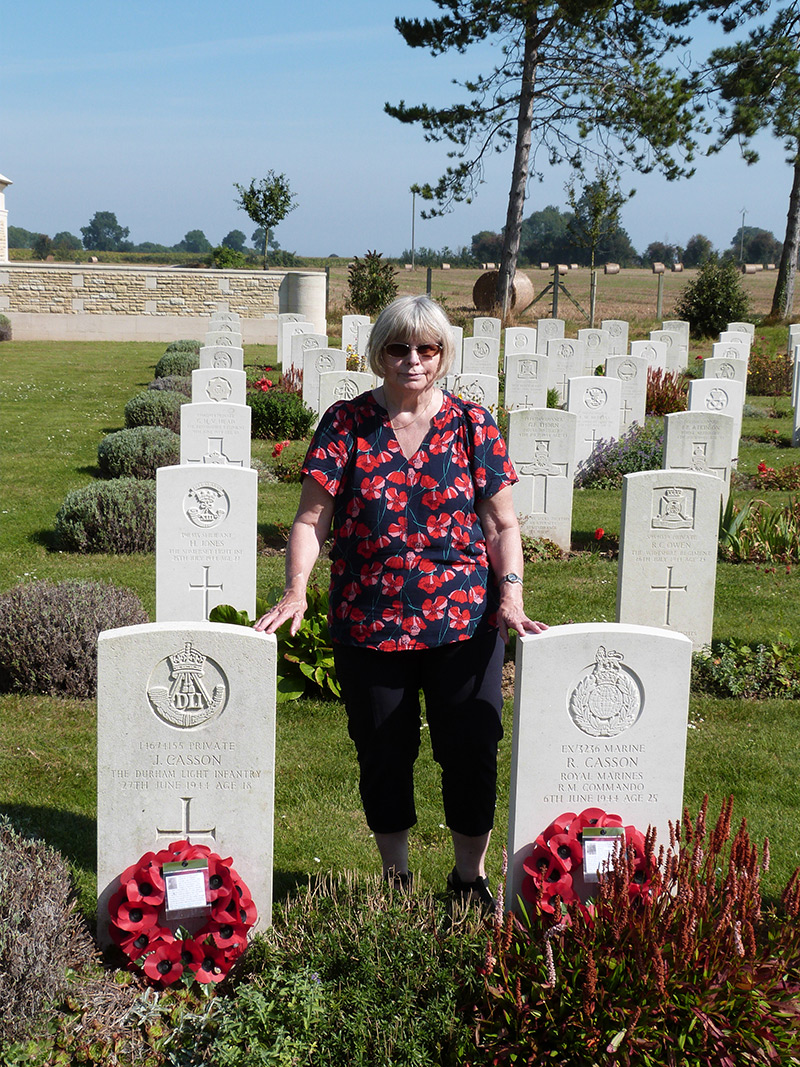 We headed back to Jérusalem to meet up with Stéphane Jacquet, it transpired that he was one of the official guests invited to the opening of the memorial on 6th June 2021. He was able to point out the buildings used to treat casualties and the location of the temporary graves for those like Joseph Casson who died of their wounds.
Later we made our way back pausing briefly at Cristot and Chateau Audrieu, the site of the massacre of 24 Canadian and 2 DLI soldiers. Then on to Arromanches-les-Bains before traveling east on the D514 to Ver-sur-Mer. This was the first time we had been able to view the memorial from the main road and how well and sympathetically it sits in the landscape, even now before the trees and landscaping have fully matured, thanks to the genius of architect Liam O’Connor.

We visited the Musée America Gold Beach in Ver-ser-Mer, which is in two sections: the first is about the first mail flight in 1927 that eventually ditched at Ver-sur-Mer and the second is about Gold Beach in 1944.

Whilst at the museum we purchased two limited addition commemorative medals for the opening of the British Normandy Memorial, plus a couple of tee-shirts for our grandsons. 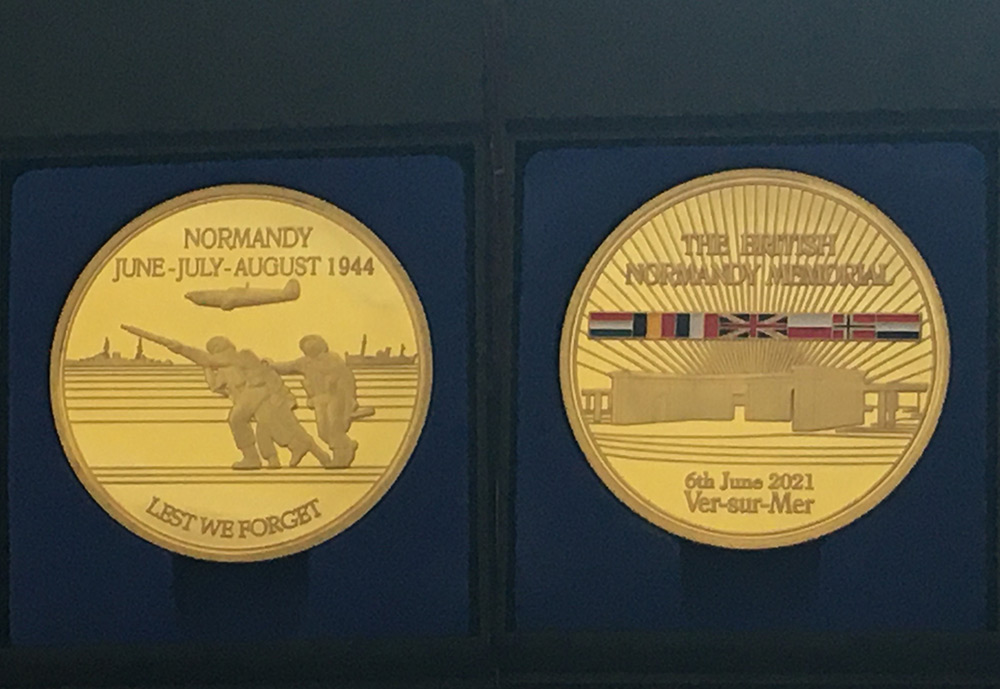 Our last day in France started with a final visit to Ryes, meeting another family who had also managed to travel over to Normandy, then on to Bernières-sur-Mer where we stumbled across “Esplanade Nan Red”, the intended landing area for RM Commando Robert Casson. We then travelled further east to Saint-Aubin-sur-Mer, the location of his temporary grave by the sea wall, after being washed ashore.

A quick stop at Langrune-sur-Mer and a memorial to 48 RM Commando, Luc-sur-Mer and a memorial to the 46 RM Commando, the Commando group Robert trained with at Achnacarry in October 1943, finally ending up at Colleville-Montgomery-Plage (Sword Beach) and the sculpture to Piper Bill Millin. As we reach Ouistreham, we saw the sign for Le Grand Bunker Musée du Mer de l’Atlantique, so as we had time, and the rain was coming, we went inside for a visit.

We made our way to the ferry for the overnight crossing back to Portsmouth and home.

Our visit had several purposes; to remember two of Mary’s Uncles, to visit the new Memorial, to attempt to be inclusive by covering other individuals and groups and to try and give a feel for what has been achieved to those, who, for whatever reason, are currently unable to travel to Normandy.

We hope that some of these aims have been achieved.

The Memorial is absolutely stunning, a resounding success and a fitting tribute to all involved.