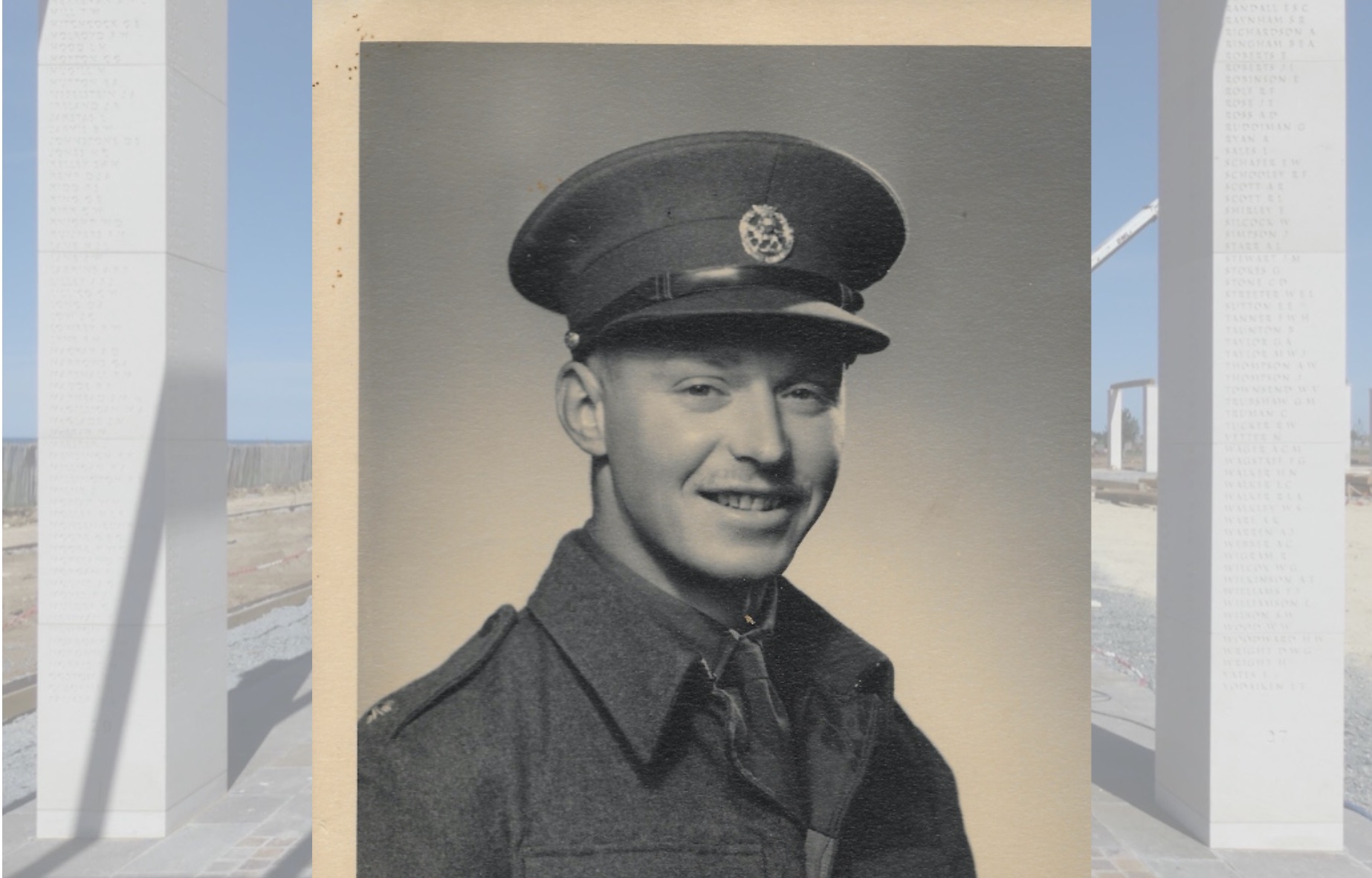 Lieutenant Frank Horatio Tett served with the York & Lancaster Regiment and was killed near Caen on 12 June 1944 aged 26. His niece, Frances Susan Crane (née Tett), was named after the Uncle she never met. Here she shares his story and Frank’s last letter home.

My Uncle Frank was one of four brothers and the only one not to make it home after the war. He is buried in Bayeux War Cemetery. 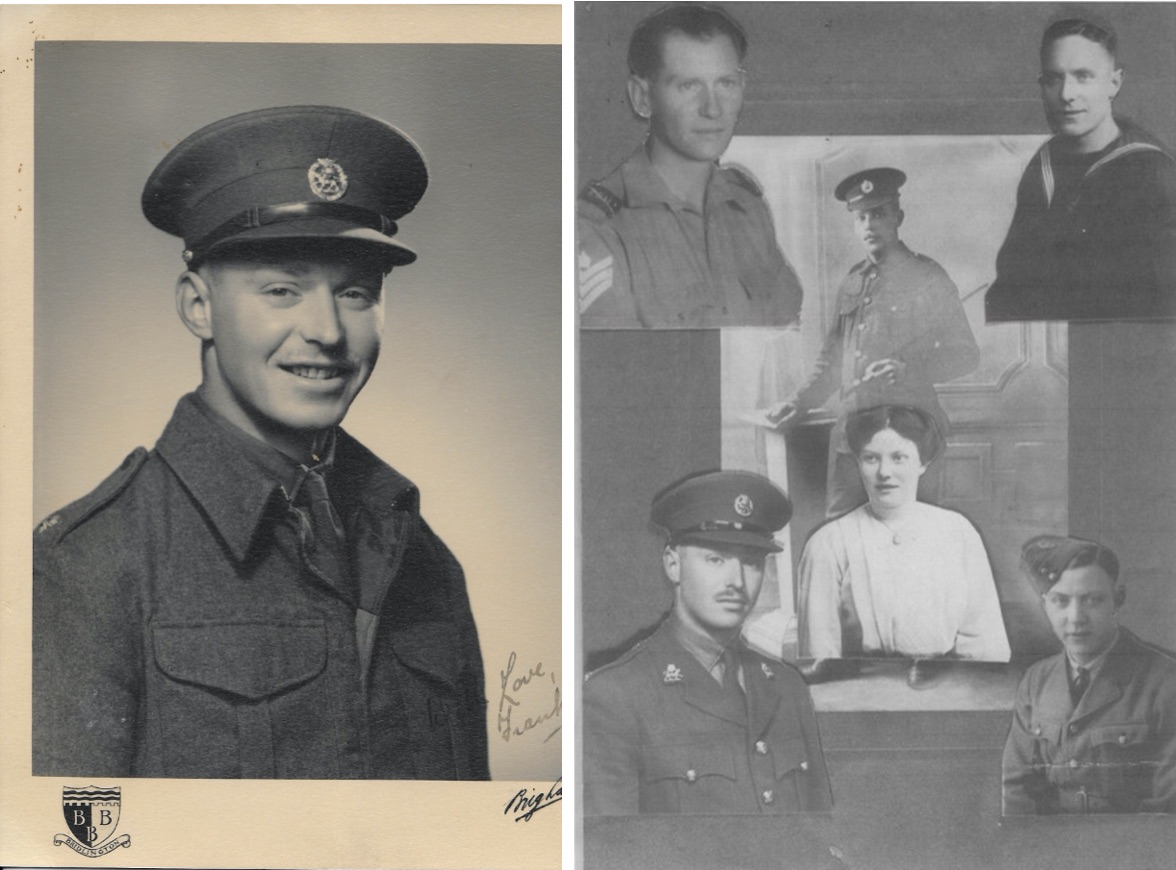 Pictured left Frank Tett and right Frank’s parents (Frank and Clara) in the centre and their four sons: William Arthur John (Jack), Francis Henry (my dad), Frank and Reginald Cyril. My grandmother was widowed in 1937, as a result of her husband Frank, who was invalided out of the army in 1915, being gassed in Gallipoli.

Below is a copy of the letter he wrote to my grandmother, who he called ‘Cherub”, on the actual day he died! It reads:

“My dear Cherub,
Even though the address is the same, I’m now in France and so far I’ve not done anything beyond eating and sleeping which is
all very nice – much more peaceful so far than in England.
At the moment I cannot tell you of anything I’ve seen but I will at the first opportunity.
Tell Nunk* I’m now eating chewing gum all day long – he’ll be awfully jealous, but of course I cannot send him any.
Please tell the lads I will write to them at the earliest possible moment.
Will say cheerio for now.
Your loving & affectionate Son,
Frank”

*Nunk, an invented version of ‘Uncle’ was a family friend who my grandmother worked for to make ends meet. 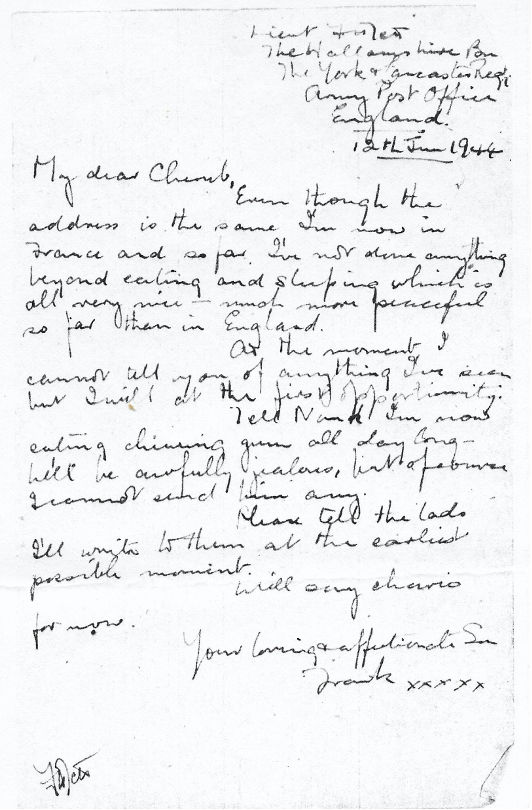 How poignant, to write your last letter home and die on the very same day!

After the 60th anniversary of D-Day, my family discovered that Frank’s fiancée was still organising for British Legion wreaths to be placed on his grave. So sad, so many years after they were tragically separated. I managed to get in touch with her and did receive a lovely, but sad letter, in reply! I hope this paints a picture of a lovely, well cared for man, who lost his life far too young.