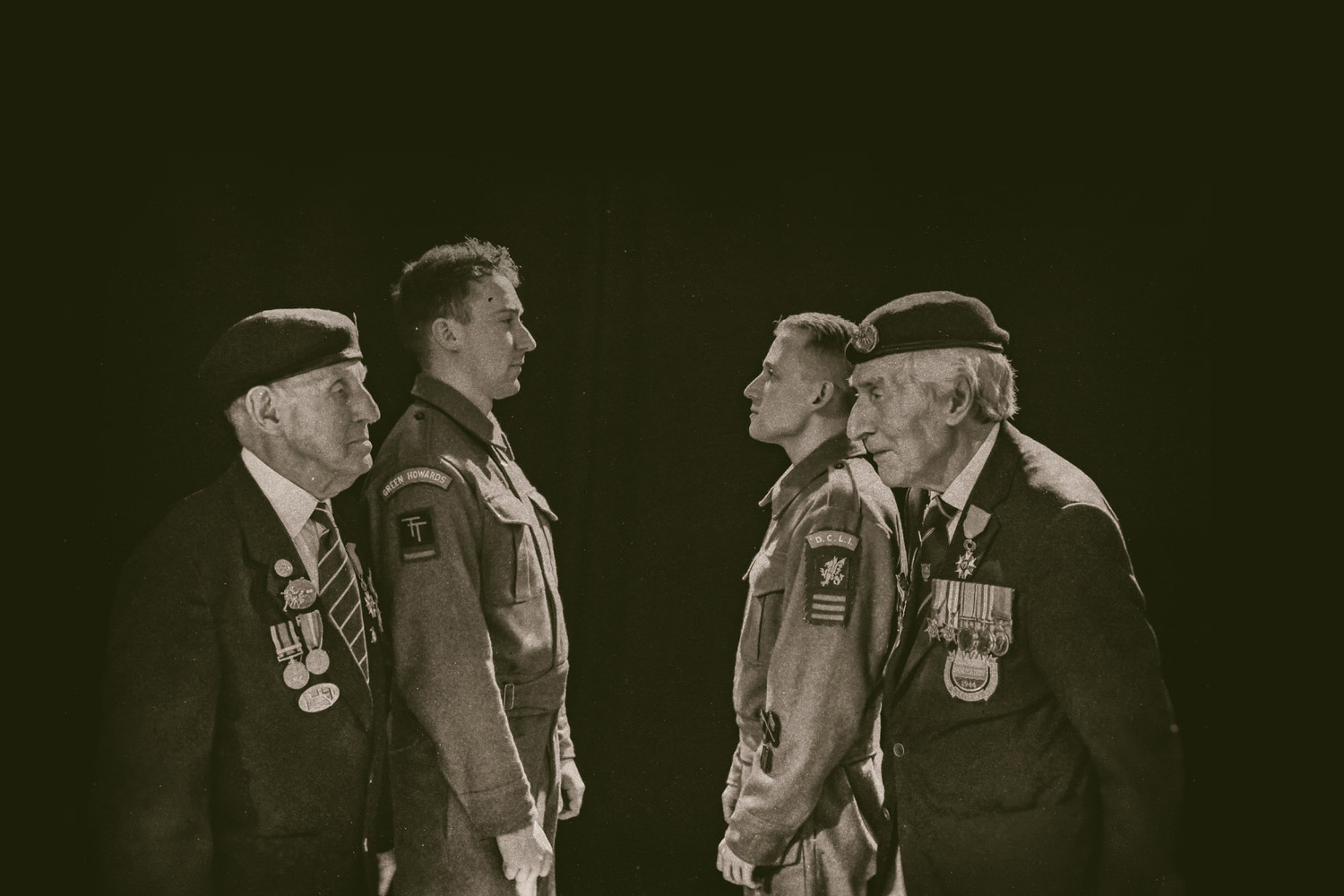 Two Gold Beach veterans will see their D-Day experiences on stage at this year’s Edinburgh Festival.

Ken Cooke and Ken Smith are ensuring the memories and lessons of D-Day will not be lost as their experiences are told in an Everwitch theatre production – Bomb Happy.

The production will also support the work of the Normandy Memorial Trust. 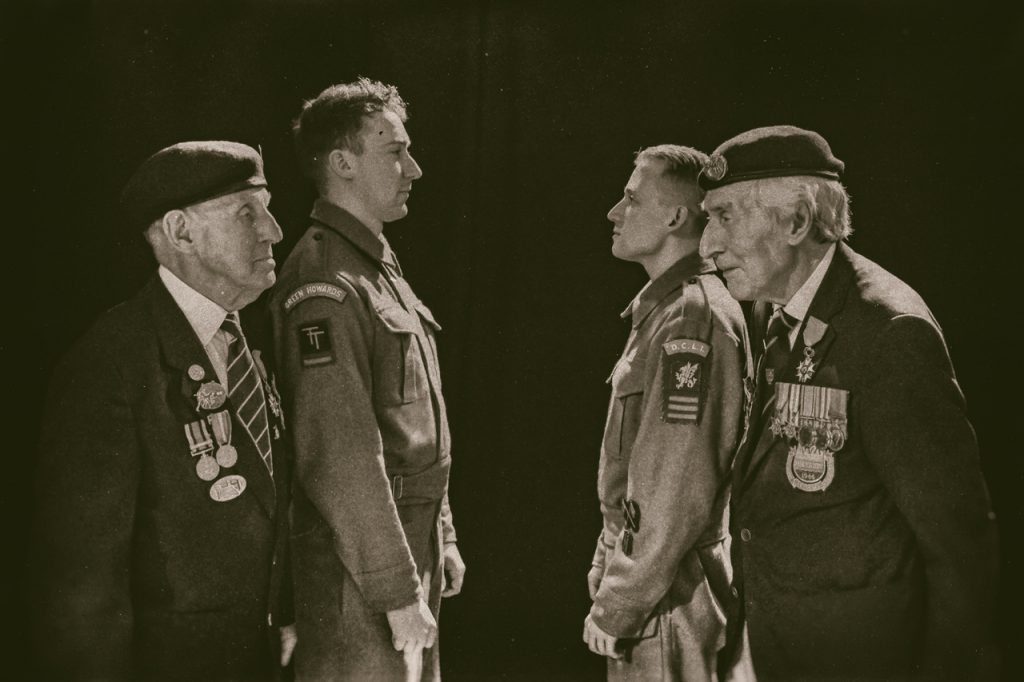 The following is taken from an article in The Yorkshire Post by Laura Drysdale.

They hope children and young people in particular will understand what D-Day and the war was all about.

“We hope it will never happen again for them and their children.”

Bomb Happy takes its name from a term the veterans use to describe PTSD – a condition that still impacts on the lives of Ken Cooke and Ken Smith 75 years later. 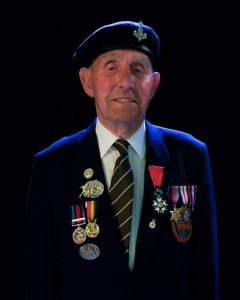 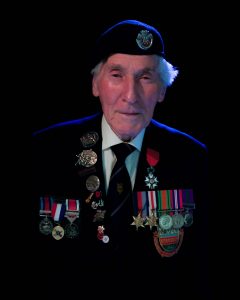 Ken Smith, who had begun an apprenticeship as a draughtsman in engineering after leaving school, did his basic training in Derby after being conscripted.

He prepared for the D-Day invasion in Scotland and Cornwall and served with the Duke of Cornwall’s Light Infantry. “You never really made friends,” he says, reflecting on the casualties and the turnover of troops. “They’d have you in a slit trench for two people. You’d be with somebody, you might know his first name and the next day he’s not there.”

Whilst getting out of one such trench on October 20, 1944, Ken was hit by shrapnel as a shell burst nearby and killed a comrade. He spent time in Brussels General Hospital before being flown home in a Dakota in November. He did five years of National Service with the Forces, including in Palestine.

“When I came out the army, I was demobbed in York. I walked to the station and I called into the first church that I came across and I took an oath at the altar that I would not handle another weapon again and I’ve kept to that.

“I’ve not even bought my family toy guns. I won’t handle anything because over the five years, I have been responsible for the killing and wounding of quite a few.”

Now aged 94 and living in York with wife Gloria, Ken, who had a career in the insurance industry, still gets flashbacks.

He survived but an estimated 10,000 Allied troops were either killed or injured on that harrowing day and tens of thousands more joined their ranks in the bitter struggle to loosen the grip of Nazi tyranny across Europe.

“You’ve seen such dreadful things,” Ken says. “The true heroes are still out there. That’s our thoughts completely.”

It is a sentiment shared by fellow D-Day veteran Ken Cooke, then an infantryman with the Green Howards.

He had grown up in a mining village in Nottingham but, when his call up papers arrived at the end of 1943, was living in York and working at renowned confectionary company Rowntree’s, where he returned, and met his late wife Joan, after the conflict.

Ken’s ship bound for Normandy set sail from Southampton on the night of June 5.

An early wake- up call came at 3.30am on D-Day morning when he and his comrades went to the mess deck for a breakfast of scotch porridge, and a corned beef sandwich, washed down with a mug of tea and a tot of rum for courage.

Half an hour later, they were told to get their gear together and make their way down the scramble nets into the landing craft.

“We set off towards the beach which we could hardly see because of the smoke.

“As we got closer, one or two of the chaps were seasick – I wasn’t. I seemed to be okay and I was leaning over the side of the landing craft watching all the fireworks and all the noise and smoke.

The ramp went down and the men jumped off into the sea. “I stepped into about six inches of water and my main feeling was oh my socks are all wet through. I weren’t bothered about the shells and bullets going.”

The men scrambled across the beach as quickly as they could, making way for more troops, tanks and masses of supplies following behind them. The danger didn’t sink in until the following morning.

“The day after D-Day, you realised some of your mates were missing. You wanted to know where they were and someone would say – oh they got killed yesterday.

“They got blown up and different things. That’s when it hit you that it was very, very serious. The bullets were real, the shells were real.”

Ken, now 93, was badly wounded by shrapnel from an overhead shell on July 4. He was put on a ship back to Britain and spent five months convalescing in hospital.

On his recovery, he was sent to re-join the British troops across the channel, this time with the Highland Light Infantry, with whom he took part in battle just outside the German town of Bremen.

There, in 1945, his war was finally over. He was sent back home with shell shock, known today as Post Traumatic Stress Disorder.

“These experiences what we’ve had and what other veterans have had, you don’t talk about them, because they’re too terrible to talk about.

“You’ve seen things you shouldn’t have seen…There’s some who have never talked about it.

Ken & Ken have been touring schools in Yorkshire to take their message far and wide with the production of Bomb Happy.

The production is running at the Edinburgh Fringe festival from the 13thto 25thAugust; and the veterans will be available to meet people after the show on particular dates.

Fundraising leaflets will be shared with audiences at each performance.

Further details on how to obtain tickets visit www.armyatthefringe.org/bombhappy 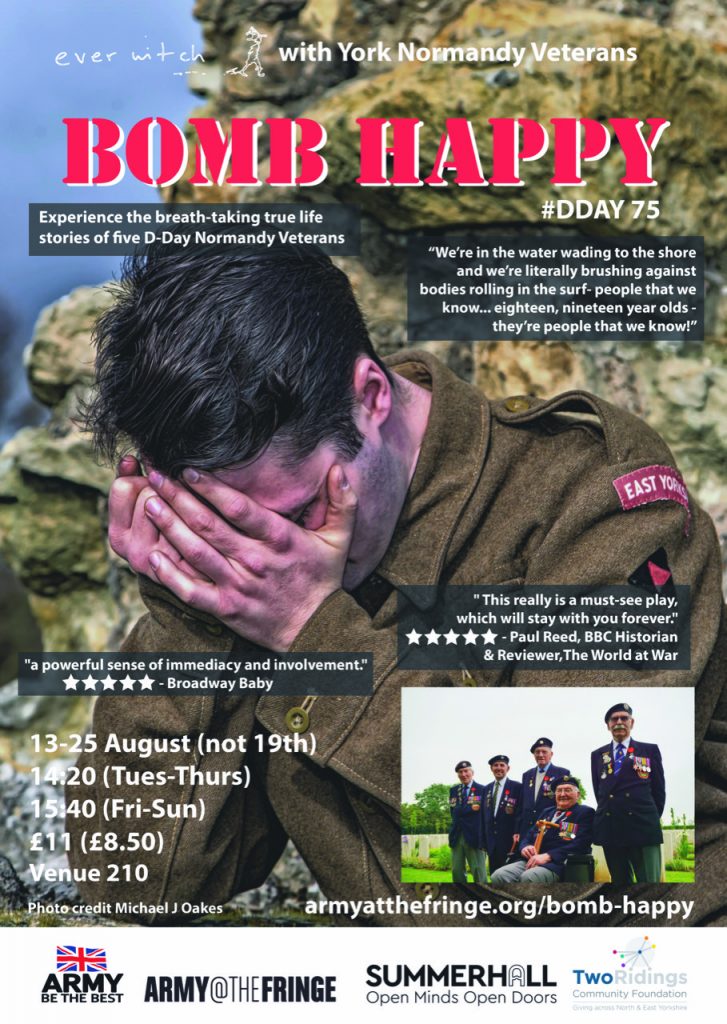