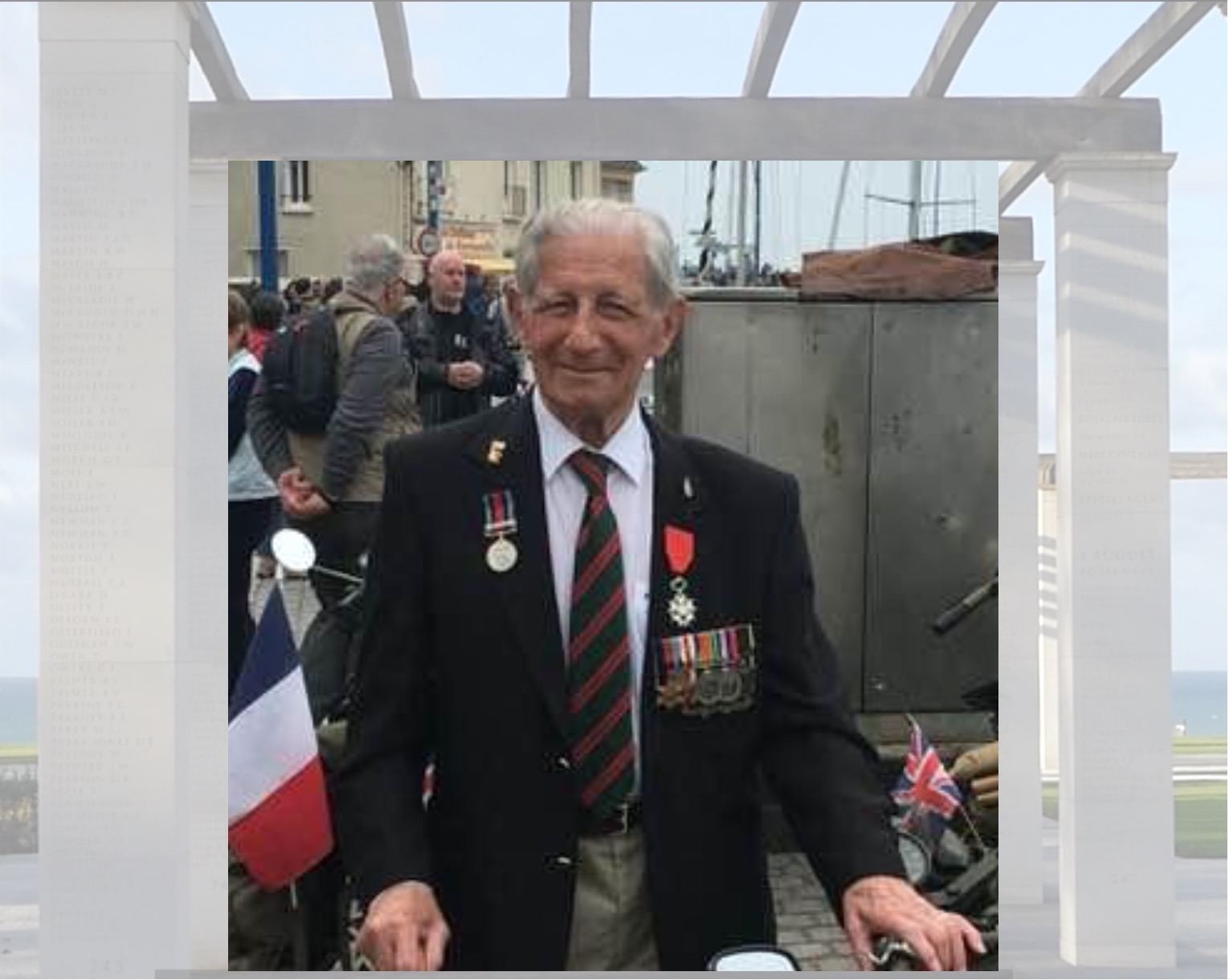 Happy 100th Birthday to D-Day Veteran Donald Howkins! Donald’s son, Alan, is a Guardian of the Memorial and he accompanied his father to the inauguration of the Memorial on 6 June 2019. The family would like to mark this special milestone by raising even more money to safeguard the future of the Memorial.

Texts cost £5 plus one standard rate message and you’ll be opting in to hear more about our work and fundraising via telephone and SMS. If you’d like to give £5 but do not wish to receive marketing communications, text DONALDNOINFO to 70085.

Here is Donald’s story, told in his own words. 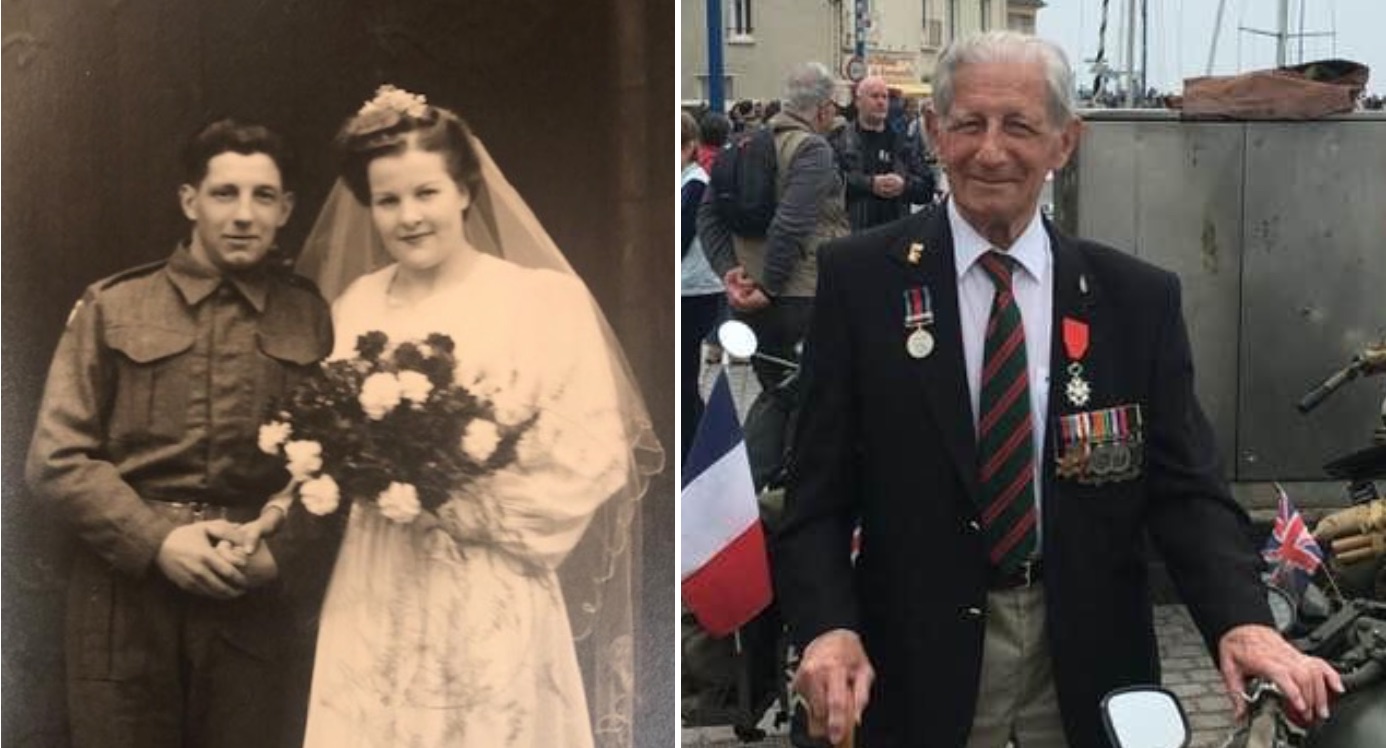 Donald and Dorothy’s wedding day in February 1944 and on one of Donald’s many visits to Normandy.

I was a 17-year-old country boy when I joined the Royal Buckinghamshire Yeomanry TA RA before war was declared. On September 2, 1939 we were mobilised and we left Buckingham in buses. Due to my age, I was not with the regiment when they went to France as part of the BEF, and was instead reassigned to the 90th Middlesex Regiment and more practice. Soon, found myself with my regiment on coastal defense AA duty.

I remember we were constantly moved all over England from 1940 to February of 1944. In 1942 I was lucky enough to get a weekend pass to visit my parents in Buckingham, and even luckier to meet Dorothy May Boughton (who was staying with family as she was from London, dodging the blitz) and we married in February 1944. My short weekend leave to marry was over and the Europe invasion training continued. March through the first part of May it was all training, and we wondered why we were given special training to “hit” moving land targets.  We were never told where we were going, we only knew we were going somewhere very soon! 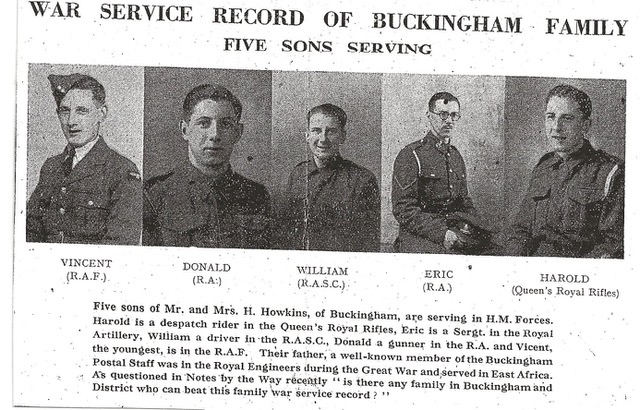 Donald and his four brothers served in the Second World War, and thankfully all survived.

On 7 May 1944 we arrived at our designated concentration area near Weybridge and started to learn how to waterproof our guns and equipment. All passes and travel were limited to a short radius from our camp. We left from London Docks and on 6 June 1944, we were briefed as to our landing at 9:10 am and we joined the convoys to board. Now we knew where we were going.  I’m probably no different to any other soldier, and can only remember climbing down the rope nets into our landing craft, I have no recollection of being on Gold Beach until we were a short way inland and off the beach by a few hundred yards or so. We then camped in an orchard close to Arromanches and became very familiar partaking with a little calvados.

Our first engagement with the enemy was in Tilly-sur-Seulles, and it was here that I witnessed the total destruction of a town and death in such a way I have never discussed it. It was also here that my good friend from my home town was badly wounded and his war was over.  From there, we zigged and zagged northward through Normandy and arrived in Braine-le-Compte, Belgium on 1 or 2  October. During these first months we lost some good men, Gunners Ryan, Nott, Keers and Taylor to name a few.  It was in Normandy that I lost my Lance Corporal stripe due to a very neglectful crossroad sign mishap.  I was ordered to direct some traffic, mainly tanks.  As all soldiers out there know, tanks create lots of dust and I lost my bearings and in turn so did a few tanks. Lucky for me the troop commander realized they were heading in the wrong direction so he turned his troops around and came to find me. Of course, the rest is now history.

We kept going of course through Belgium, Holland and into Germany, but I wanted this to be about Normandy.

I have returned to Normandy many times, had the honour to be at the Normandy Memorial site in 2019, and hope to be back there 6 June for the dedication ceremony to my fallen comrades. 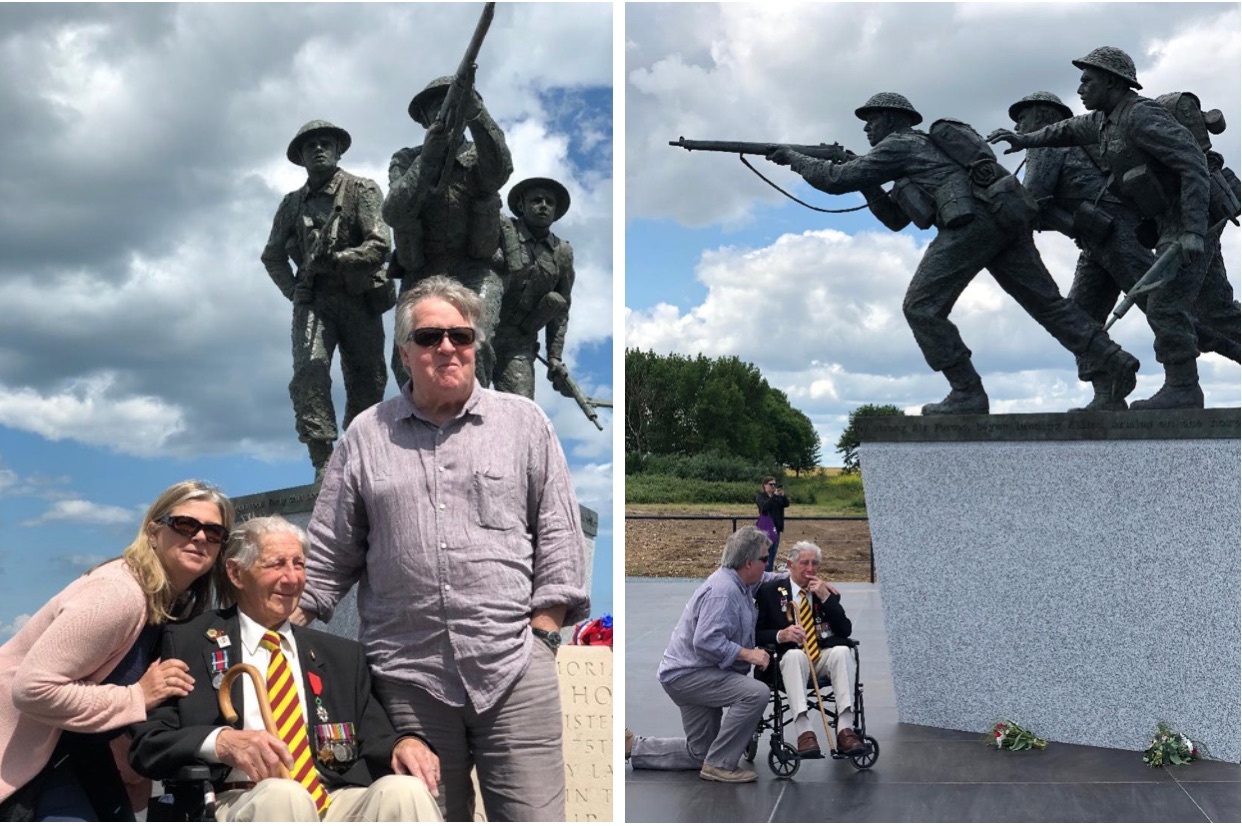 Donald, his son Alan and daughter-in-law Laura by the D-Day Sculpture at the inauguration of the Memorial in June 2019.