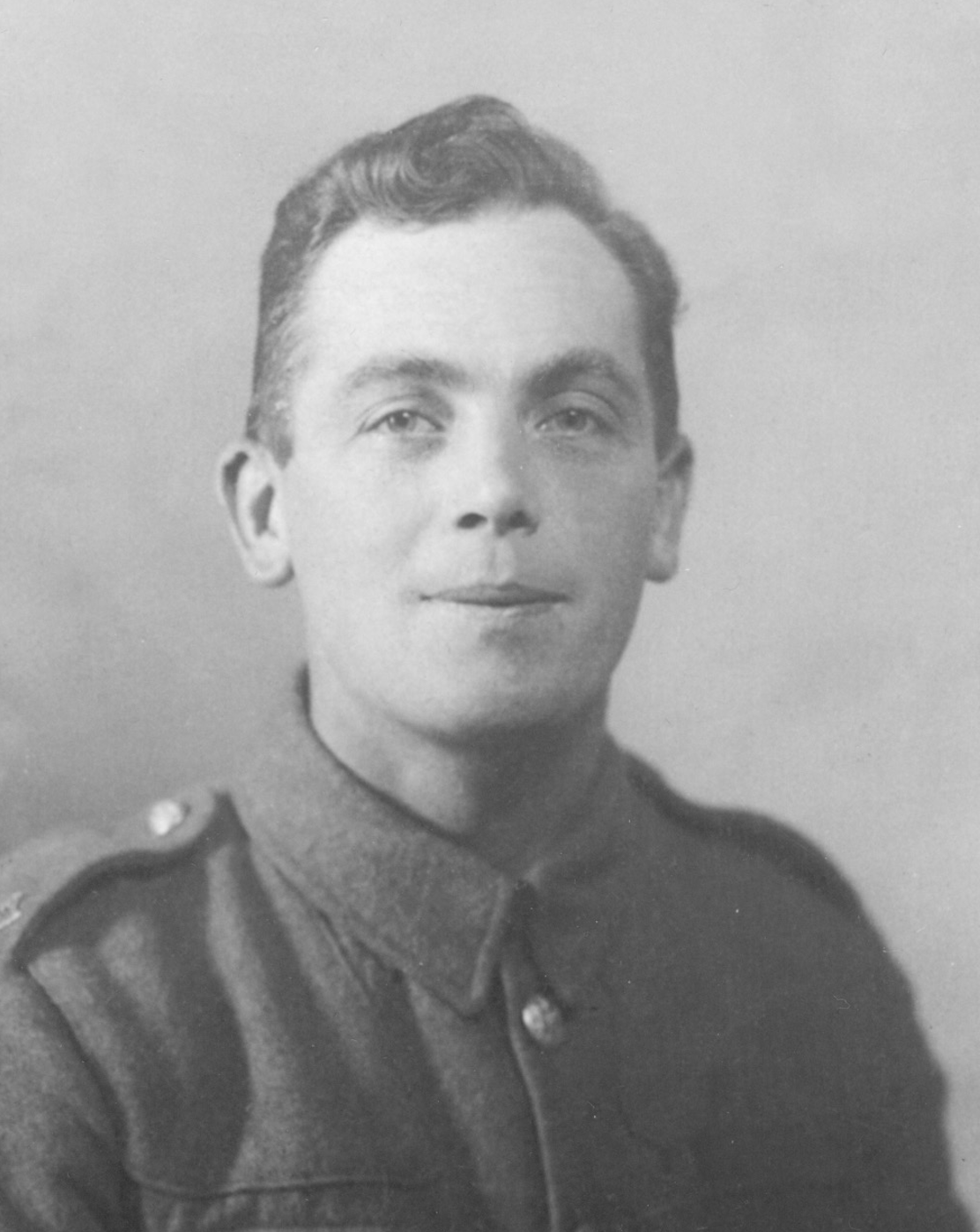 The story and photographs are shared by the Trust with kind permission from Robert's daughter, Jean Foxley, her husband David, and the wider family. Lance Corporal Robert Osborne is remembered by his three daughters, Doreen, Beryl and Jean. Sadly, Robert's son David died suddenly in 1985.

Our father Robert could be regarded as a career soldier. He joined the army (the East Surrey Regiment) in 1925 at the age of 18, signing up for three years with the Colours, remaining a reservist until the outbreak of war. He married our mother Elsie Cobbett in 1933 and together they had four children over the following six years. 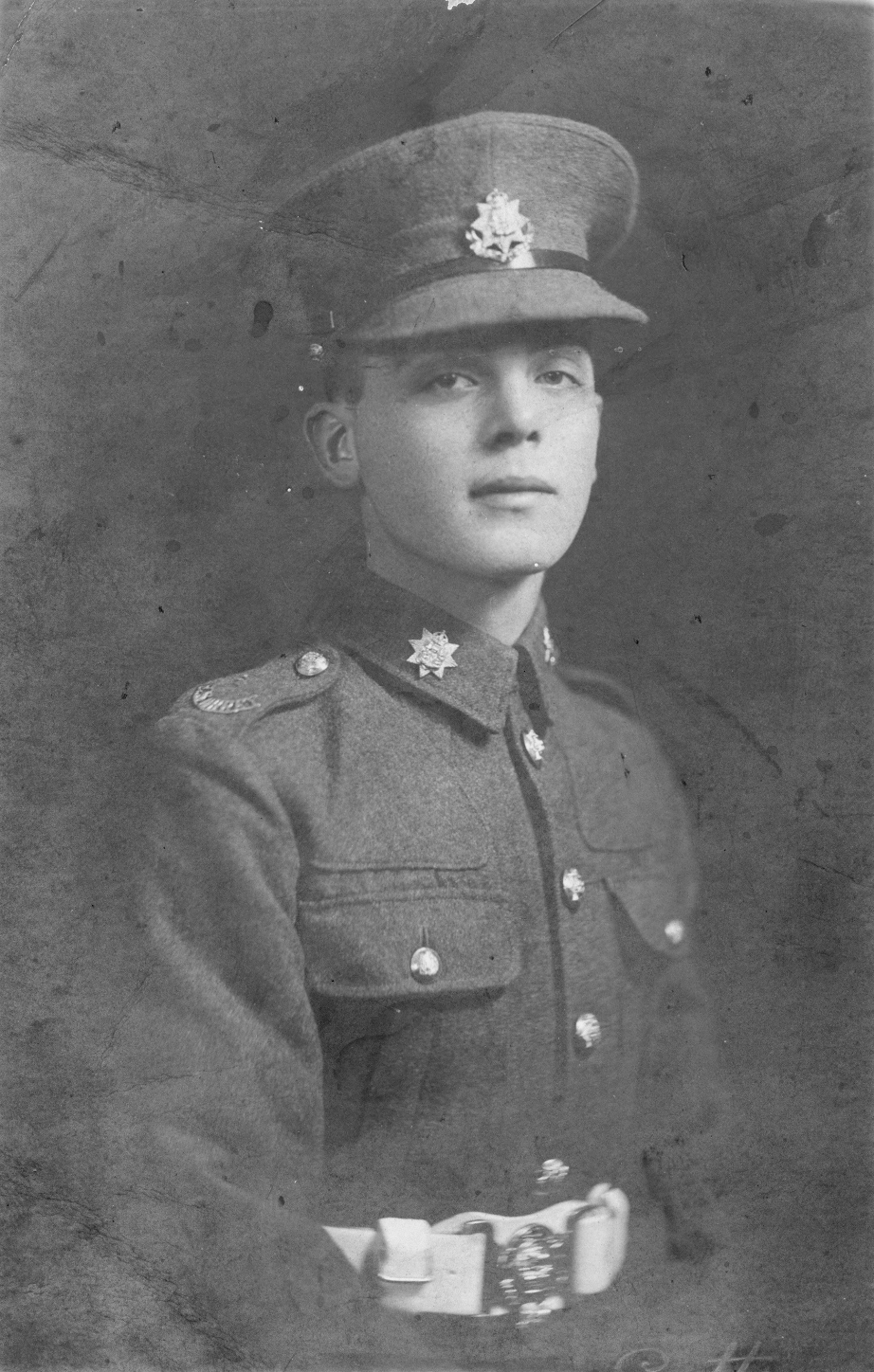 Robert in uniform as a young recruit in 1925.

He was mobilised on 2 September 1939, a day before the declaration of war, and was almost immediately posted to France, based in Rennes, seconded from his regiment to a Pioneer Battalion. They were assigned to strengthen defences in Brittany against a feared seaborne invasion. When the German Army broke through Belgium into northern France during May 1940, Robert was among about 150,000 British and allied personnel trapped in France. They saw heavy action around Rouen before being ordered to retreat on 10 June, several days after the Dunkirk evacuation had been completed.

Details of their retreat are sketchy, as the war diary was not updated after June. It is likely that they marched a lot of the way to the Atlantic coast. They certainly were on foot when they passed the basilica at Lisieux, where they were given Saint Christopher medallions by nuns. Arriving at Saint Nazaire by 17 June, Robert and his comrades boarded His Majesty’s Troopship Lancastria, a converted cruise liner. As it was known to be the last possible date for an evacuation, the captain was requested to ignore “safe loading limits” and board as many people as possible. The loadmaster stopped counting at 6,000 (for a ship with a capacity of 2,200) until eventually the captain ordered that the ship was so dangerously overloaded that many men had to disembark. Although still heavily overloaded with possibly as many as 9,000 on board, the Lancastria was preparing to set sail when it was attacked by a Stuka dive bomber. Four bombs hit the ship and within 20 minutes it capsized. Robert was on deck at the time and managed to get into the water.

Fortunately he was a strong swimmer and after several hours in the water, heavily contaminated with fuel oil, he was picked up and transferred to a Royal Navy vessel. Precise numbers of casualties will never be known, but at least 3,500 souls perished. On the orders of Winston Churchill, all details of the sinking were kept secret and no official documents will be released until 2040. He feared knowledge of the incident would irreparably damage British morale. However, the New York Times published news of the disaster on July 25th and over the next few days many local and national papers in the UK published details and survivor accounts. It was not until after the war that we were visited by one of his comrades who escaped with him. He was always known to us as Mr Marshall, and told how he, a non swimmer, was kept afloat by Robert until they were rescued.

After a period on leave in June 1940, Robert was posted back to his regiment. The next four years were spent in training camps in England, and in the lead up to D-Day he transferred to the Queen’s Royal Regiment (West Surrey). After a period of leave, when the following family photo was taken, he landed back in France in the second wave on 8 June. 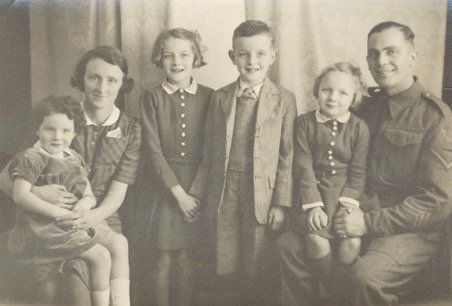 Robert with his family on leave prior to the Normandy invasion: Left to right Jean, our mother Elsie, Doreen, David and Beryl.

In a letter home he recounted wading ashore in waist deep water and having to march 10 miles in soaking wet clothes. From the war diary of his unit (D Company 1/6 battalion Queen’s Royal Regiment), we know that he was in heavy action for several days near to Villers Bocage where he was wounded on 16 June. Due to the seriousness of his wounds, he was airlifted to the hospital at RAF Wroughton near Swindon on 18 June. During his time in hospital he wrote home, always expressing more concern for the welfare of his family than for his own condition. He wrote that he had surgery to repair a badly broken leg and had also been injured in the right side, losing much blood. He told Mum not to visit him as he expected to be moved to another hospital, but sadly he died suddenly on 21 June. He is buried in a family plot at the cemetery in Walton-on-Thames with a War Graves headstone. For the rest of her life, our mother was able to tend to his last resting place, and we have continued to do so to this day. 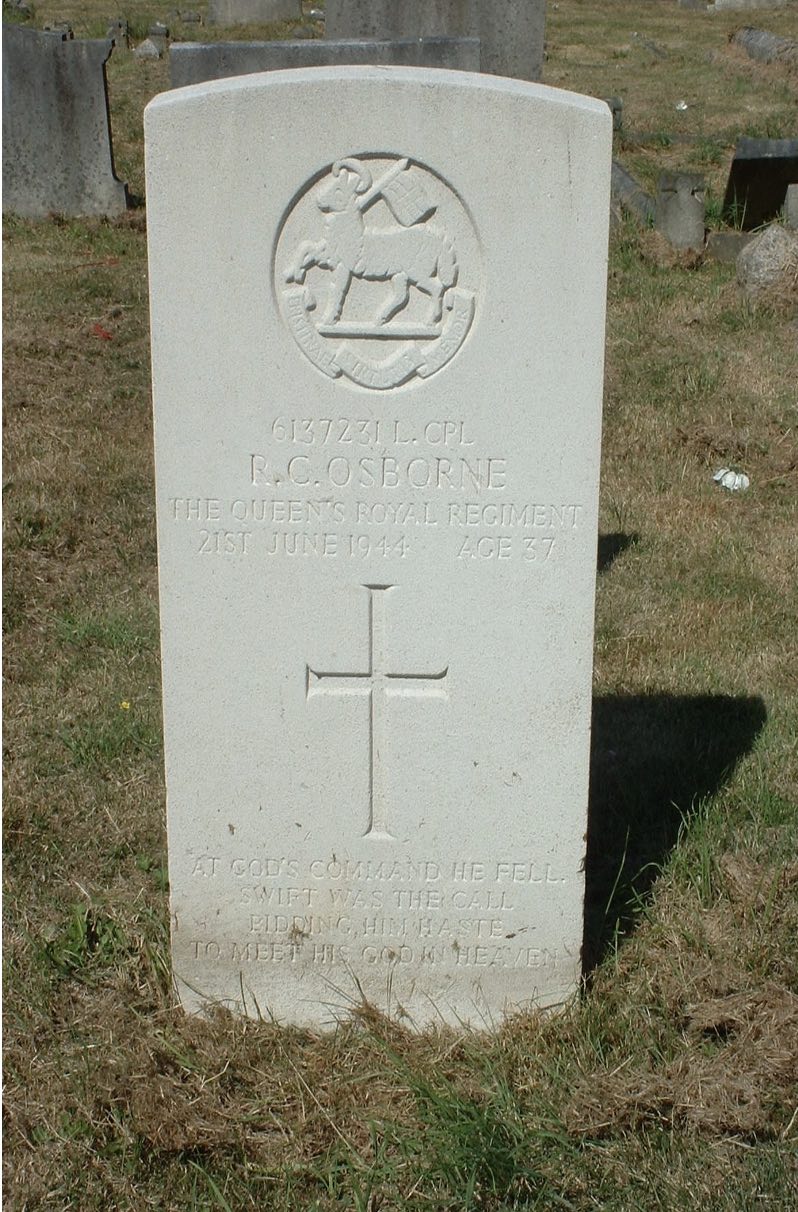 His letters home from Normandy, written on 9, 12 and 14 June are very poignant and show what a deep relationship our parents had. As children we did not realise the enormous impact Dad’s death had on our Mum. Not only had she lost her soul mate, but she had to raise four children on a meagre war widow’s pension. Growing up we began to realise what an enormous hole Dad’s death had created in our family.

In 1994, on the 50th anniversary of the Normandy campaign, we all went with our mother Elsie to Caen to receive a medal, on our father’s behalf, awarded by the regional government to all personnel involved in the Battle of Normandy. Our mother would be very proud that our father’s name is included on the British Normandy Memorial; a fitting tribute to the memory of someone who had one miraculous escape but who finally made the ultimate sacrifice. 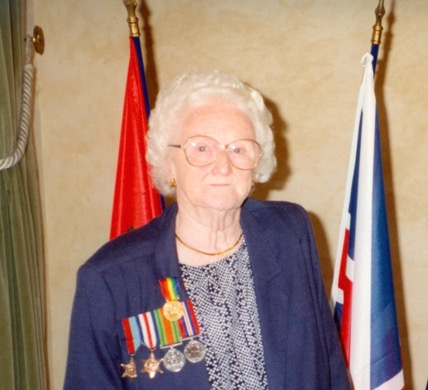