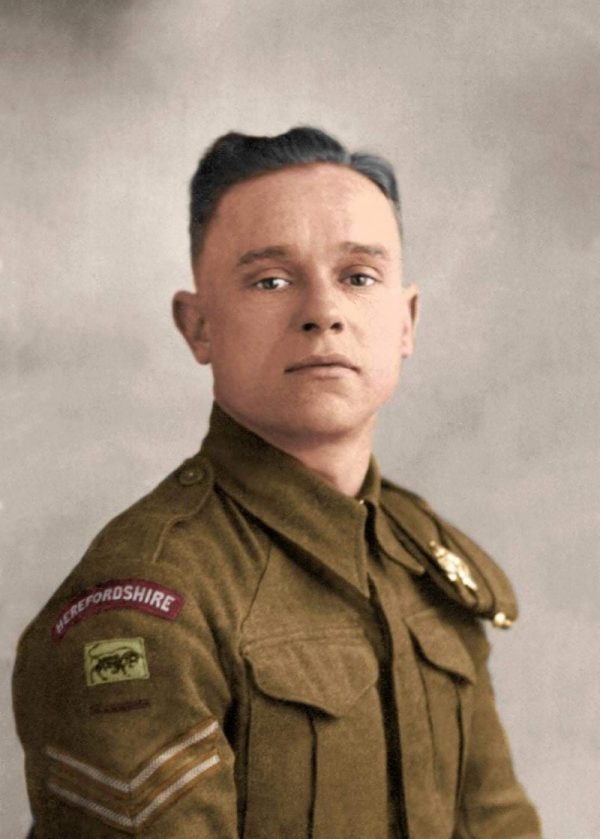 This story and photo is shared by the Trust with kind permission from Bob Curtis, nephew of Joseph Curtis
My uncle Joseph Curtis has no immediate surviving family but I have been researching his life and death over the past 4 years. I have been able to discover such a lot of information, particularly the circumstances of precisely when, where and how he lost his life. And I continue to find out more about what happened over these days. You can read more about his life story here but this story shows what was happening on the day he was killed.
Between June 28th and July 3rd 1944, my uncle and 14 other men of the 1st Battalion, Herefordshire Regiment were killed in action in Normandy during Operation Epsom and its aftermath.

11 of these men, including my uncle, were buried just behind The Herefords front line in Tourmauville .  2 photographs of the graves were taken at the time. One of the photographs shows damaged houses in the background. These buildings are located on Chemin des Vilains. They still exist today and have now become No.2 Chemin des Vilains. 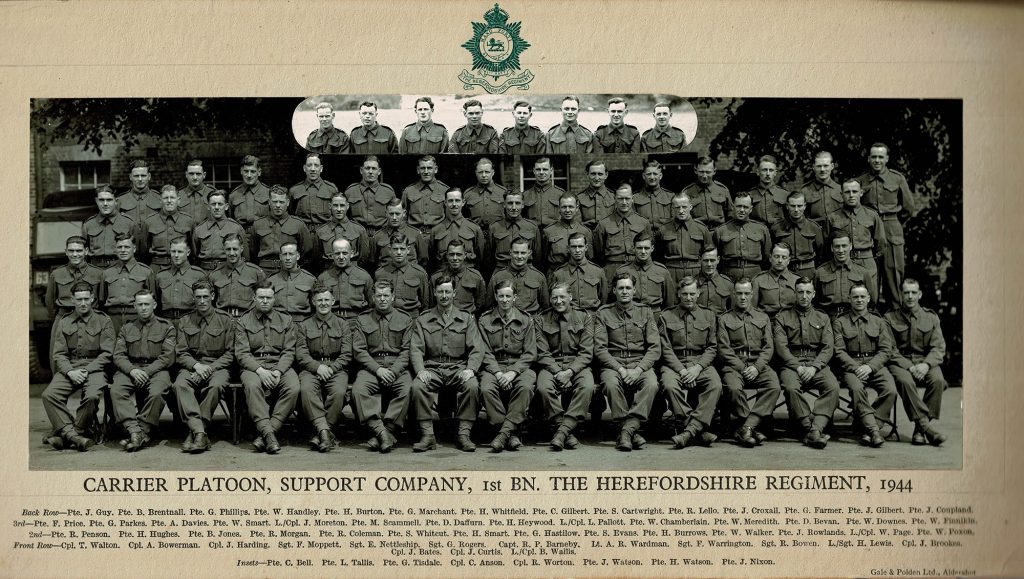 This Platoon photograph shows 3 men who are in the graves photos, namely: Corporal J. Curtis, Private S.Evans and Private C.Bell.
Another 5 men are shown who did not return home, namely: Captain R.P.Barneby (he was initially buried elsewhere), Corporal J.Harding, Private S.Cartwright, Private G.Farmer and Private W. Finnikin.
I wrote about what I had been able to find out about my uncle in this story but I recently discovered that Sergeant Frank Moppett, of my uncle's Platoon, had given an eye witness account of the events of 1 July 1944 when my uncle was killed which was published in a book called "Hill 112 - Cornerstone of the Normandy Campaign" (1984) by Major J.J.Howe
I was stunned and shaken by what I read. The account brings home the horror of war in all its brutality. Yet it took place amid cornfields on a day when 'All around was quiet. The sun shone in a blue sky. We could forget the war was on'.

"The terrible night turned in to a silent dawn. The hunt for the intruders started. Sergeant Moppett of The Herefords was sent forward along the Esquay road, up the slope of Hill 112. His task was to assess the effect of the British artillery fire.

"Arriving at what I thought was the crest, I ordered the men to dismount (from their bren gun carriers). We went forward on foot. It was a false crest. The real one was 100 yards further on. All around was quiet. The sun shone in a blue sky. We could forget the war was on.

Then I saw the turret of a tank on our left. I crawled through the corn with Lance Corporal Morten. It was knocked out. Behind were several more.

We returned to the road and moved over the crest. Then I realised why the Germans wanted the hill. You could see for miles - over to Esquay and on to Evrecy and right over the Orne river. Everything was still quiet. We moved on. Carnage. Dead Germans everywhere, literally in piles amongst the wheat. There were seven or eight knocked out tanks.

At the side of the road we found a row of wounded Germans. They had received some first aid treatment and then been left for the night. The first man was blond, blue eyes looking into mine. His right hand was blown off and he was leaning his head on the stump. 'Wasser, wasser (water, water)," was all he said. Next to them was the remains of a headquarters. I collected some marked maps. The Platoon Commander, Captain Barneby, had come forward.

As we were discussing the maps my look-out shouted 'Sarge - Steel helmets in the corn!' On our right, about 100 yards away, we could see German helmets moving. All hell let loose.

From Esquay, straight up the road, and from both sides came Spandau fire. Captain Barneby was hit in the first burst. I got him into a carrier and sent him back to the RAP (Regimental Aid Post). My bren guns were answering as best they could. I shouted for the carrier with the 2" mortar and the Vickers gun. It slewed round to give us some cover. I called for everyone to mount. Corporal Curtis was killed instantly, and he fell into the carrier.

I jumped on to the sloping front and we withdrew back over the crest. Then I pulled into a field and got the brens into position in case we were followed. A mortar bomb exploded amongst us. Lance Corporal Morten had shrapnel in the thigh and the Corporal was wounded in the face; one of the drivers was blinded.

Back in the 'safety' of The Herefords' position, Sergeant Moppett lost another driver who was hit in the head by shrapnel. Captain Barneby died of his wounds.

I had a moment of panic. In my first engagement I had lost my Platoon Commander, a Corporal, a Lance Corporal and two drivers. After four years of training together for the war, half my section had gone in a couple of hours.

How long would we last, I wondered."