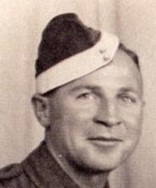 The story and photographs are shared by the Trust with kind permission from Susan Jennifer Merskey (née Crann) and David Crann, niece and nephew of Ben Crann, with credit due to Ruth Merskey, Ben’s great-niece.

Ben Crann was born on the 23rd March, 1913 in Leeds, West Yorkshire to parents who were Jewish immigrants from Russia escaping the pogroms and who had settled in Leeds in the 1890’s.

Ben was one of four brothers and three sisters. His older brothers, Sam and Philip, went to University - Sam to study Maths, Philip to study Medicine. His younger brother, Leslie, was at this point still at school.

Family finances did not stretch to Ben going on to further academic education. Instead, he served a three-year apprenticeship at a local well-reputed firm of cabinetmakers before following a career in that trade. He was a keen sportsman and played football for both the Leeds Maccabi team and for the Yorkshire Amateurs. 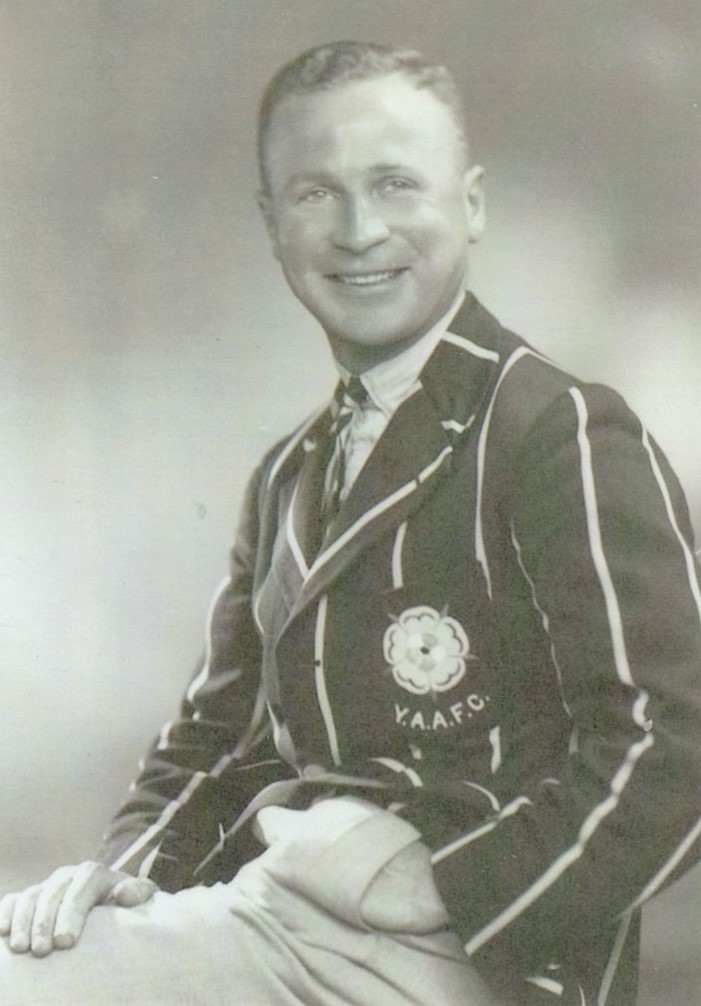 Ben in his Yorkshire Amateurs uniform, 1936

He went on tour to Palestine in 1936 with the Leeds Maccabi team – an almost unheard-of adventure at the time, especially as the Nazi movement in Germany was becoming more and more of a menace to European tranquillity.  Ben was also a good tennis player and an accomplished bridge player: the latter will acquire an unanticipated poignancy later in this history. He was a good mixer and enjoyed a full social life. He never married and had no children.

All the brothers served in World War II with the sole exception of Philip who, as a general medical practitioner in a mining area, was in a reserved occupation.

It is believed that Ben enlisted on the 8th May, 1941 as a Private in the Pioneer Corps. On his Identification Form on enlistment, he was shown as 5ft 4ins tall, weighing 146lb, with blue eyes and brown hair. He was promoted to Lance-Corporal on the 19th August, 1941 and was confirmed in the rank of Corporal on the 22nd January, 1942. 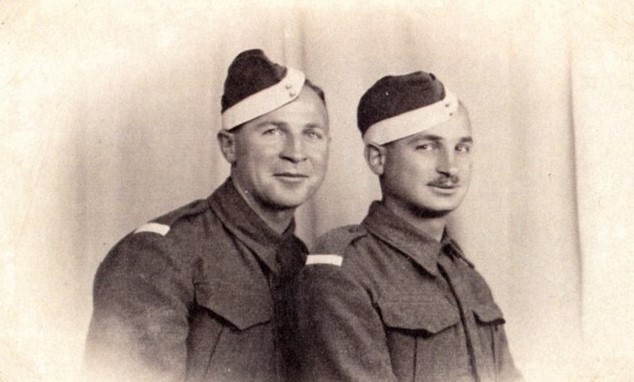 On the 1st January, 1943 he reported for the 21st Officer Cadets Course from 148 Training Brigade with the recommendation from his Commanding Officer: “CRANN. B is suited by personality and intelligence to be trained with a view to being commissioned”. It is believed that his brother Leslie attended the same course at the same time. Ben received his Commission as Lieutenant with effect from the 25th February, 1943. 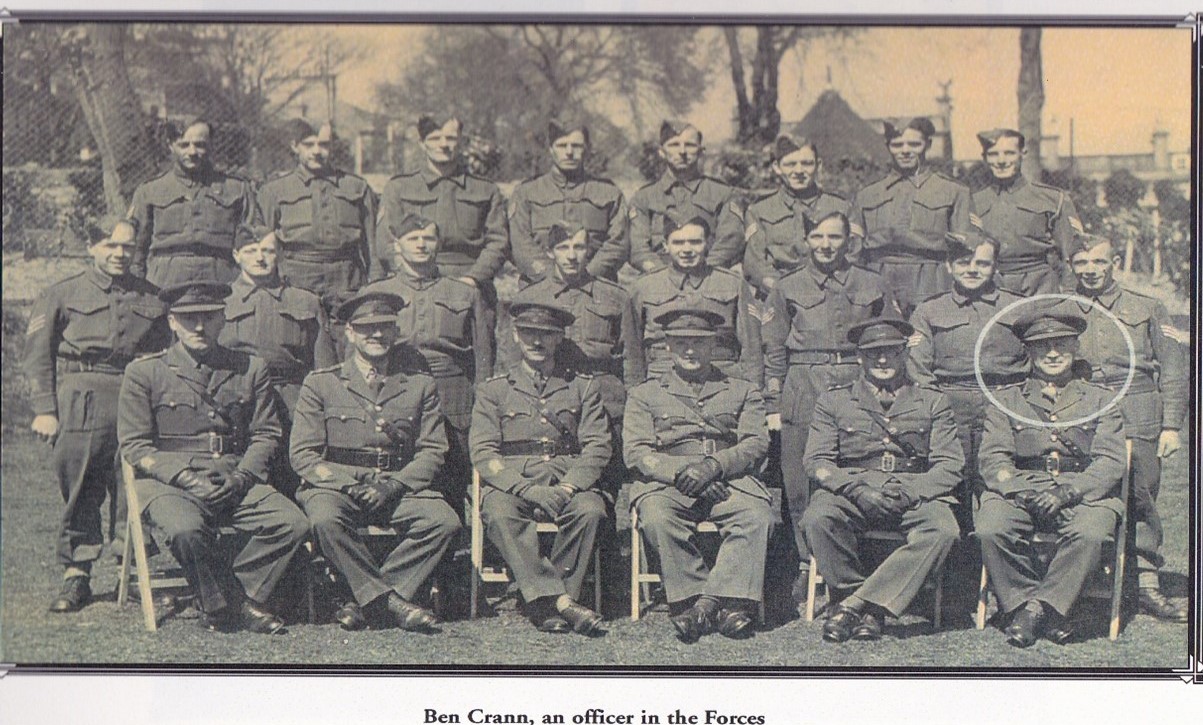 Ben, as did Sam and Leslie, came home on leave during the war years whenever he could. He is recalled as a gregarious and generous uncle by his nephews old enough to remember him. 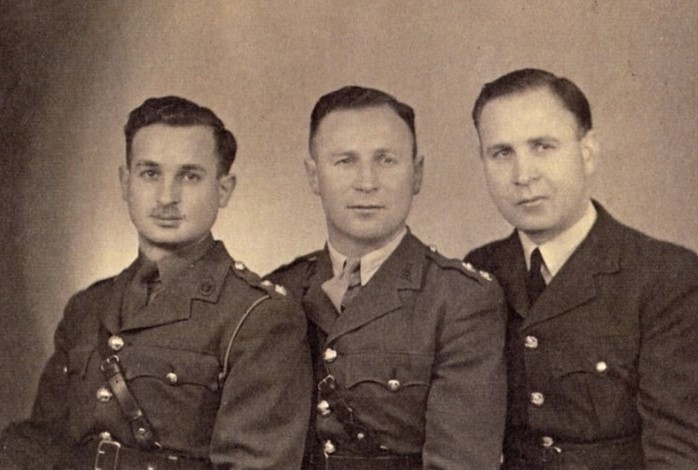 The photo below is the last known one of Ben, taken on the 11th April 1944 whilst on leave. 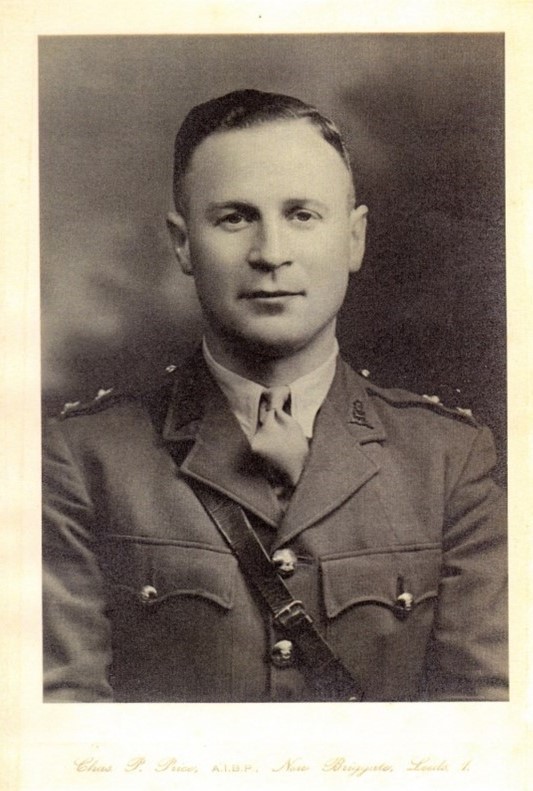 The official record relating to the events of the 8th June, 1944 are contained in the recommendation for an award referring to Sergeant Arthur Stanwick (the Sergeant serving under Ben) which reads as follows:

“At about 04:30 hours on the 8th June 1944, the L.C.I. [Landing Craft, Infantry] carrying amongst others 1 Officer [Ben Crann] and 32 ORs [Other Ranks] of 164 Company Pioneer Corps… was struck by a torpedo and the officer was killed. Sergeant Stanwick immediately mustered the men on deck, called the roll and found all present. He then ascertained that the hold in which the officers were travelling had been hit and his own officer was missing. By his calm example he maintained strict order and discipline and when another landing craft came alongside, he superintended the transfer of his men and arms. On arrival at the beach, he again called the roll and checked that none were missing. He then ascertained the location of his company and re-joined it with all his men, and no loss of arms.”

Ben was originally posted as missing, presumed drowned. One of his Sergeants – believed to be Sergeant Stanwick – was later to visit Philip with some of Ben’s effects including his uniform, his Sam Browne belt and his revolver. It was on this occasion that Philip was told that there was no question of Ben having survived: the boat had received a direct hit. He was told that, at the time, Ben was playing bridge in the hold.

Although a full copy of the letter dated the 25th July, 1944 from Major L. A. L. Clark addressed to Flight-Lieutenant Crann (Sam) is set out below, Major Clark’s comments are specific:

“I know that I’m expressing the feelings of my brother Officers when I say that his loss has been a tremendous blow to us.
Ben was a most zealous, efficient, and competent Officer with a high sense of responsibility, admired and respected by all with whom he came in contact.” 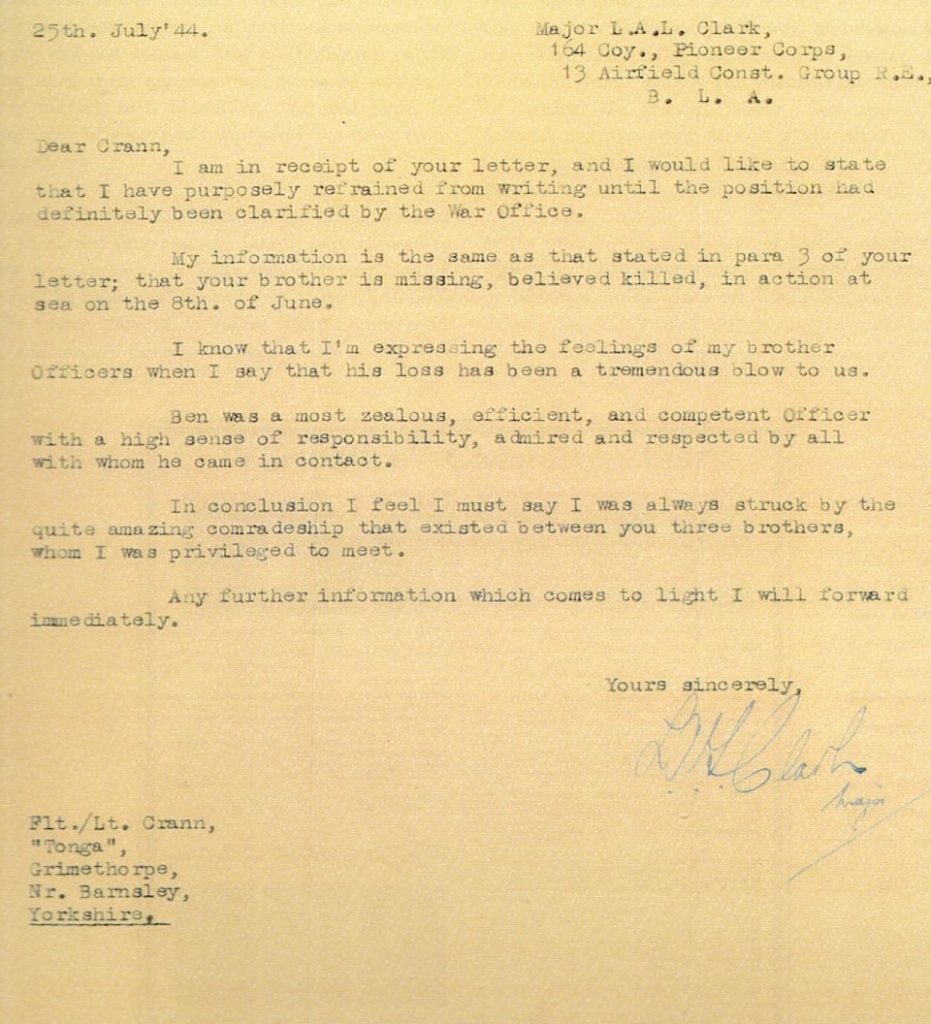 The circumstances of his death were to be confirmed by Philip’s brother-in-law, Horace Cohda, who wrote that he had seen the boat go down as he had been in the next boat in the flotilla. He added that he had wanted to have been in the same boat as Ben but there had been no room! Such are the vagaries of war.

A letter dated the 14th October 1944 from E. D. Lloyd of the Army Council was sent to Ben’s father, Isaac Crann, at Philip’s address: “in all the circumstances there can be no room for hope that your son survived.” 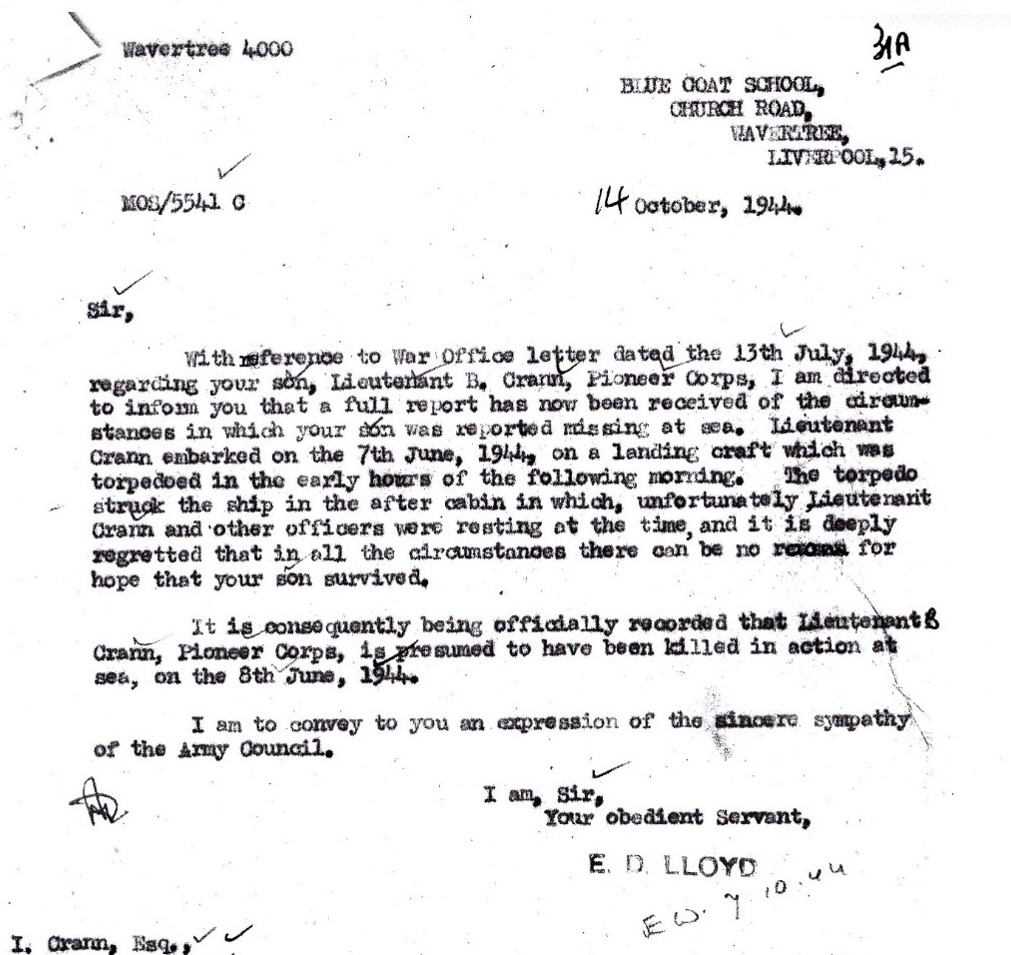 In the early 1990’s a colleague of Leslie’s daughter-in-law, Mandy Crann, found quite by coincidence an old newspaper lining the drawer of a cabinet in an antiques store. The paper was a copy of the Yorkshire Evening Post containing notification of Ben’s death and a photograph of him. 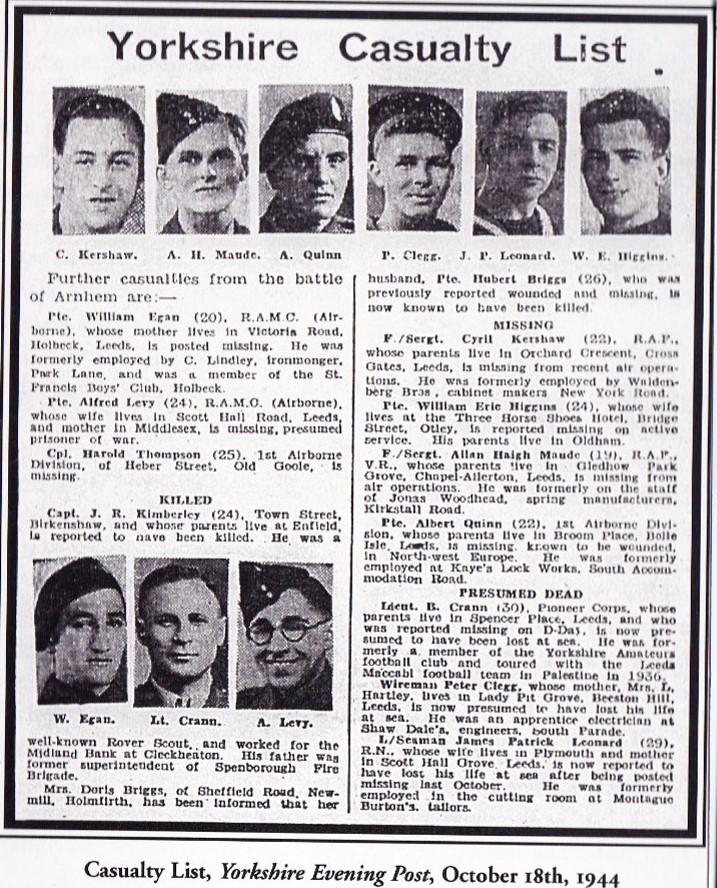 As seems to have been so often the case in the aftermath of World War II, Ben’s family found it difficult in the extreme to talk about him. It was just too painful. There was of course at that time no recognition of what was later identified as post-traumatic stress disorder: families and casualties were left largely to deal with their losses in their own way. Most of Ben’s many nephews and nieces have no real knowledge of who he was as a person or indeed what his war experiences might have been other than this summary reveals.

The gravestone in Leeds recording the last resting place of Ben’s mother (who died in 1953) includes a marker for Ben. That is the only physical evidence of his life other than the photographs and letters referred to above; a display cabinet that he had himself manufactured as a wedding-present for Philip; the inscription on Column 25 of the British Normandy Memorial; and the inscription on Panel 19 of the Memorial Wall (dedicated to the more than 1800 casualties of the Commonwealth Forces who died in Normandy and have no known graves) at the British Military Cemetery in Bayeux – the lintel of which bears the legend: “We, conquered by William, have set his Homeland free”. A fitting epitaph for all those who, under British command, were to lose their lives in the liberation of Europe.

One of Ben’s surviving nephews wrote the following lines after visiting the British Military Cemetery at Bayeux, Normandy. The lines are equally relevant to those whose names appear on the Normandy War Memorial:

“We, conquered by William, have set his Homeland free”

Lost, and is found:
a few sparse syllables etched
top left, Panel Nineteen,
on a wall of arches and of words –
an inventory of the untraced unburiable –
less than one mile
from the Bayeux Tapestry
on the path from Domesday to doomsday;
a theatre of headstones
that would make granite weep:
memory…
the unforgotten and the unforgettable.

In the corner of some foreign epitaph
he keeps his watch:
you should come see; come see,
tears in your pocket
and a handkerchief the size of France.